I first met Kathy through Chris’ aquarium club where she and her husband Randy were active members in South Florida. Through the last several years in Florida we got to know them pretty well through camping and hiking adventures and they were gracious enough to let us crash at their place while we were getting ready for the Florida Trail this past January. They are really cool folks and I’m glad to share Kathy’s interview with you. She’s got some great photography and is interested in film so that is very distinct in a digital age!

First off, give us an idea of who you are, why you blog and your general geographic location.
My name is Kathy Hunt and I have an analog soul. I am a long-time photographer and am currently “going home again” with film photography. I blog to share my love of all things analog photography with the world. I live in the balmy tropical paradise that is South Florida.

When were you first introduced into photography and what were your earliest subjects?
My first introduction to photography was my father. He’s been a photographer longer than I’ve been alive and he was my earliest influence. He gave me a Diana 120 film camera when I was about 6 years old and I think I shot photos of bits and pieces of our neighborhood with it. When I was a couple of years older and a bit more responsible (I had taken the Diana apart to “see how it worked”) he gave me a Brownie which I recall taking shots of some horses around the neighborhood in Kansas with.

Why are you drawn to black and white photography and particuarly why do you focus on film instead of the more popular digital photography?
I have been exploring film photography since 2009 after becoming quite disillusioned with digital. I found that I just couldn’t keep up with the latest technology and gadgets. I also felt that film, much like vinyl LP records has a “soul” that just can’t be captured digitally. I sometimes make the analogy with folks that ask my “Why film?” that it’s like comparing a CD to an LP.

When making my foray back into the film world, I found that I could more efficiently and inexpensively develop my own black and white film at home. I also found that I liked the black and white images much better…I think it just comes down to the fact that the image is simplified into the multiple grey tones of light and shadow. 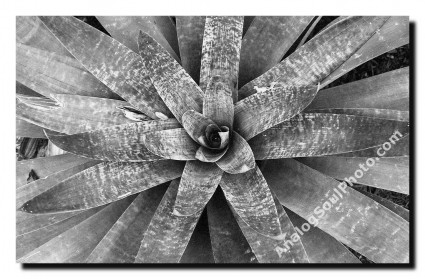 How do you choose your subjects and what subjects are you drawn to?
I like to shoot a variety of subjects with my vintage film cameras. I find I am most attracted to nature subjects with the infinite variety of tones and textures…especially here in Florida. I also enjoy shooting architecture and its associated details and elements. And, along with being a major influence on my photography, my Dad is really into cars and thus, I am also. I really enjoy shooting vintage automobiles with black and white film…it makes me feel as though I am back in the time that the car and camera were manufactured and imagine the photographers of the time. 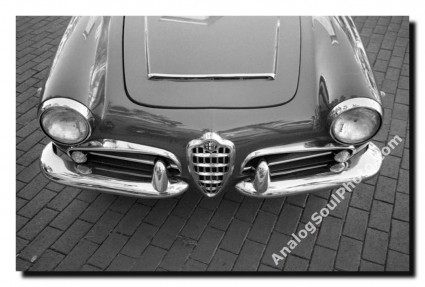 What subject or location would you shoot if you had unlimited means?
Oh, how I would love to be able to travel the world and shoot many exotic locales with my film cameras! I think the top of the list would be Japan; it is a place so rich in culture, tradition, and oh, the food! Of course, I would also love to go to Italy, Greece, and Paris too.

Is there an artist or anyone else that you draw inspiration from? Someone that we should all know about but might not know?
I am truly inspired by the work of the recently “discovered” Vivian Maier. She was a woman who managed to be quite the prolific photographer while she held jobs primarily as a nanny in the middle of this century. Her subjects were random people on the streets of Chicago and she managed to catch some amazing spontaneous moments with her trusty Rolleiflex. I have high regard for her because she shot only for herself; her work was only published after her passing recently. I also enjoy the fact that she used cameras like the Rolleiflex that are quite complicated machines that are not very easy to use and she managed quite well. This was at a time when photography was also much of a man’s world.

You previously worked as a fine art framer, give us some of your tips for framing and maybe a juicy story from your framing days.
I have spent the last 22 years of my life doing custom picture framing. The one tip I would give others regarding framing is that you should make any work “standard” size so that you can pick up frames just about anywhere to fit it. If your work can accept a mat, then you can just custom cut it to fit the frame. I am very proud of the fact that I became quite experienced in conservation framing and had an amazing opportunity to frame documents signed by some of our early presidents including Abraham Lincoln and Zachary Taylor.

Do you have any unique processing techniques or are those top secret?
My most recent experimentation in home processing black and white film developing is called “stand processing.” It is amazing in that you can put the very diluted developer in the tank and have to agitate it very little and do something else around the house as it “stands” for one to two hours. 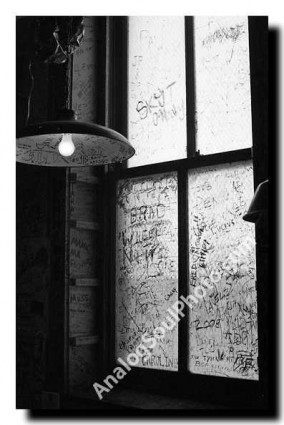 You are a collector of cameras from all eras, which one is your favorite and does it have a story behind it?
Oh, favorite camera, how would I ever choose? I feel like they are my “children” and I couldn’t possibly choose just one! I can name my top three though, because they are the ones I am constantly pulling out when I’m running out the door. My trusty Pentax MX SLR because it is a camera that saw me all through my photography education in high school and college. This camera is simplicity itself and is like part of me, it is so intuitive for me to use! After that, I would say my little Olympus XA rangefinder because it is a camera I also used in high school and it has amazing quality for a pocket size camera. I think the third would be the Rolleiflex twin lens reflex that my father just gave me. I got it right about the time the Vivian Maier was hitting the news and really inspired me because she had used a Rollei primarily.

What advice would you give to someone new to photography?
I would tell anyone new to photography to use all of those settings on their camera! That’s the wonder of digital, you can experiment quite easily and get immediate feedback on how it works. You would be amazed how many cameras have an aperture priority or manual setting on it…and if it does, use it. What have you got to lose?

And finally, tell us the five people you’d love to have over for dinner and why!
Hmm…five people for dinner, huh? I think I’ll include people from past and present, just for fun! Well, I would just have to have Sting because I’ve adored him and his work forever (well, almost; at least since 1983), then Vivian Maier because she was amazing, Tim Burton because of his amazing movies, Helena Bonham-Carter because she’s an incredible actress (that I named a camera after: “Halina Bonham-Carter”) and she’s with Tim anyway, and CS Lewis because he wrote some of the most incredible literature in the Chronicles of Narnia that I have to read at least once every decade.

Kathy blogs at www.AnalogSoulPhoto.wordpress.com, sells her work at Analog Soul Photo and you can visit her Facebook Page and become a fan!