Over the weekend Chris and I were in Nacogdoches and spent some time around Stephen F. Austin State University and their outdoor botanical parks. The first one we stopped at was the Pineywoods Native Plant Center on the north side of the campus. The directions to get there were a little sketchy for our Garmin to figure out, but eventually we found it. There was a family event going on with kids running to different stations to learn about nature—at one station I saw something called the ‘Bird Olympics’. I wonder what that was about? After walking around the front part of the center we found out there were trails out beyond so we grabbed a map and headed down those. The trails were pretty busy with bikers, hikers, and joggers. The tree ate this bench.

Spring is trying to come out, but it was still bare on many of the trees and shrubs in the area. I was captivated by this little scene at a creek crossing with this palmetto in the corner. The palmettos here in this part of Texas are Sabal minor, and thankfully don’t have that wonderful sharp blade that Serenoa repens, saw palmetto, has. 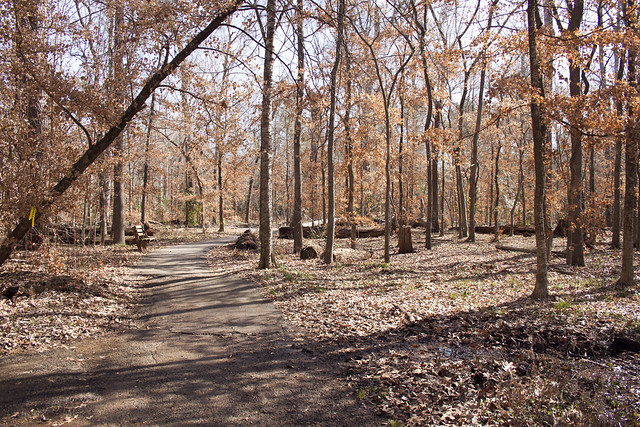 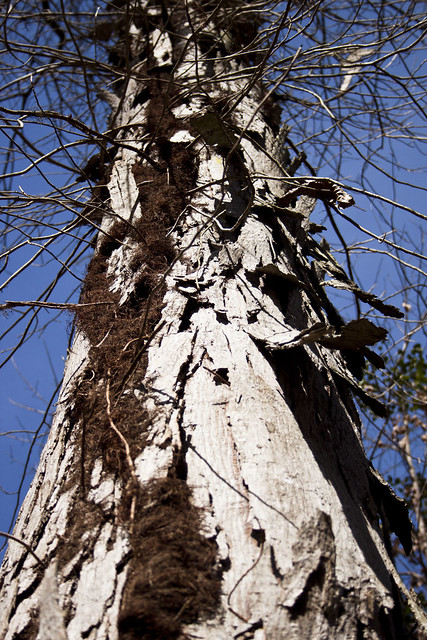 I think Chris and I were discussing that this tree might be shagbark hickory, but if anyone else is good at identifying trees by bark and this isn’t right, let us know! An iris that I spotted and soon we found several in a small wet area. A little plant nerd humor! Afterall, SFA is known for its forestry degrees!

The walk around the area was lovely and they have an extensive native plant collection as well. I took some photos of some of the more interesting native plants but I will showcase them in another post later on. We also walked around the Gayla Mize garden and the main arboretum which will also be showcased in another post. An excellent place to wander around if you are ever in deep east Texas!