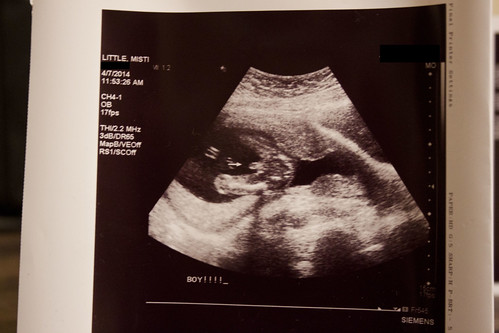 BOY! We had our appointment on Monday morning and promptly went in to the ultrasound room right away. The tech asked if we wanted to know the sex, which of course we did, and while Chris had full view of the screen the tech did a few measurements and then asked what we thought it was. I swore it was a girl this whole time and there was even a potential girl name we’d talked about. And then she showed me the screen and pointed out the leg….the other leg…and then the other ‘leg’…and I may have said “It’s a boy! Damnit!” The damn wasn’t out of disappointment, it was out of not being right! So much for mother’s intuition! 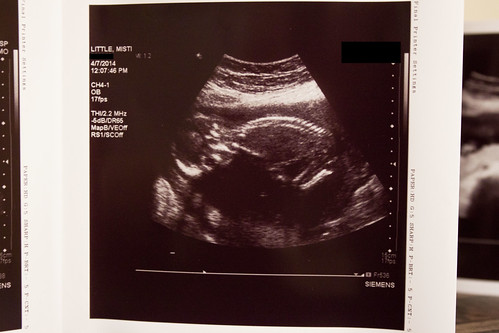 Our tech is incredibly generous with the photos she printed out, so we got all sorts of photos of leg bones and little feet and some slightly creepy alien looking ones too. He’s definitely grown a whole lot in the time between our first appointment and this one! 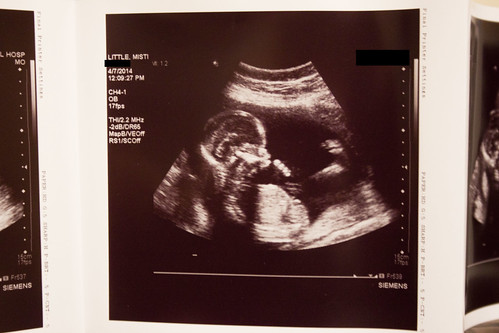 But then there’s the couple of super, duper cute ones where he appears to be sucking his thumb or bringing his hand to his face…and kicking out his legs! It was at the end of the week after our 16 week appointment that I thought I felt something but didn’t feel anything again until later on in 17 weeks. It took a few days for me to realize that it wasn’t a muscle twitch but it was the baby! It doesn’t feel anything like gas like a lot of people try to describe it as feeling, definitely more of a muscle twitch. He’s definitely gotten a little more active and stronger as the weeks have gone on, and the timing of his activity has switched around a little to more evenings than afternoons as it was earlier. I’ve been able to see my stomach twitch when he kicks a couple of times, but of course when I try to get Chris to come see he doesn’t want to perform on command. Feeling him move is definitely surreal and reassuring at the same time. In the weeks between feeling better after the first trimester and waiting for movement I really didn’t ‘feel’ pregnant. Now I do, and of course my belly is getting larger as well. 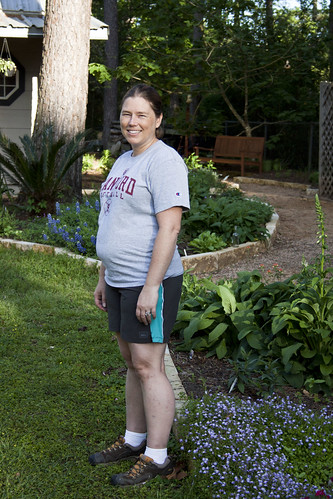 Here’s my 19 week photo. Sorry for looking like a bum, but I had already changed out of my work clothes (super cute maternity jeans and a silky maternity top!) and put on something more comfortable when I remembered I wanted to take a photo.

In other baby news, we started our Bradley Method class last Monday. We ended up being the only couple signing up with our teacher this go-round, but I think it will be great since we’ll have a little more one on one Q&A time with the teacher and her husband. I’m definitely glad we are going with Bradley Method as I really think Chris will be a great asset in this natural birthing process. We have some exercises to go through and I’m trying to track my protein intake, which can be tricky when trying to figure out a complete meal. I’m supposed to take in 80-100 grams of protein a day, which is a lot higher than I had been eating. This wasn’t just recommended from the class but also from my midwife since the first appointment I had with her (she also recommended Bradley Method if I wanted to do natural birth), but 80-100 is probably what more active athletes eat rather than the average person.

I guess the other question everyone wants to know is, do we have a name? No, not yet. We have tossed some ideas around but nothing has stuck yet.

Anyway, I guess that’s about it…other than I’m already looking forward to the Fall and being able to run and do some movement without needing to pee after a mile!