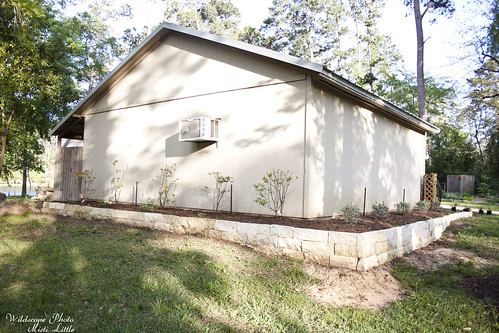 Back in February I wrote about the latest garden project we had going on. Well, last Sunday Chris finished it up in between mist showers by planting the azaleas we’d purchased in Nacogdoches the day before. We’d bought two native azaleas for our main flower bed from Cook’s Nursery just outside of Nacogdoches when we were there in February and kicked ourselves for not buying more. The plants were a good size and had only been $20, plus finding native azaleas can be difficult. So, since we were already in east Texas for a plant sale we went and bought five more azaleas for the back side of this perimeter bed. As they tolerate shade well, we figured they’d be a good fix for the north side of this bed.

I’m really pleased with how this bed turned out and can’t wait to see it grow. Beneath the azaleas are columbines and I *think* cinnamon ferns. On the sunny side is the Texas sage and creeping rosemary. On the corner, not pictured here and planted after I took the photo, is a ‘Maryland dwarf’ Ilex opaca, American holly. We saw it in Nacogdoches at the SFA gardens and it was a small trailing plant. Chris found one online back in February but the nursery who he bought it from was up north and kept delaying in sending it due to the cold weather. He reminded them about it and got them to send it earlier this week. I’m hoping all of the plants grow a lot this season, but we shall see in a few months!

We were supposed to start working on our perimeter herb beds in the vegetable garden but may have to postpone it another week until we can get to the lumber store that sells the cedar wood we need. The one Chris went to for the other raised beds isn’t open on the weekend like we thought they were, so we’ll be coming up with a different plan and checking another lumber store just in case. I’d really like to get that bed complete by the end of April so we can focus on baby Teddy’s room and some other inside projects as summer rolls around.