…without bending my knees! That’s an accomplishment, if I do say so myself! 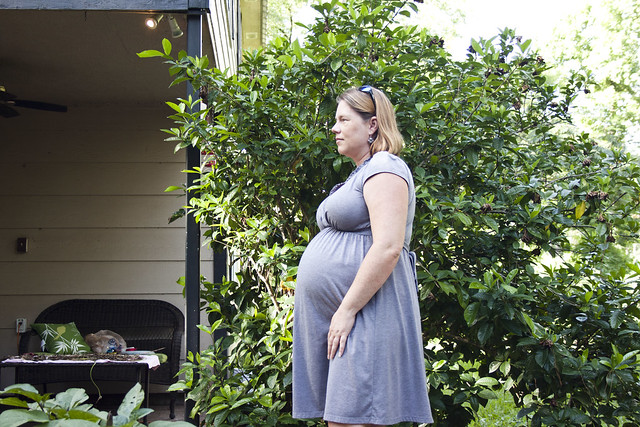 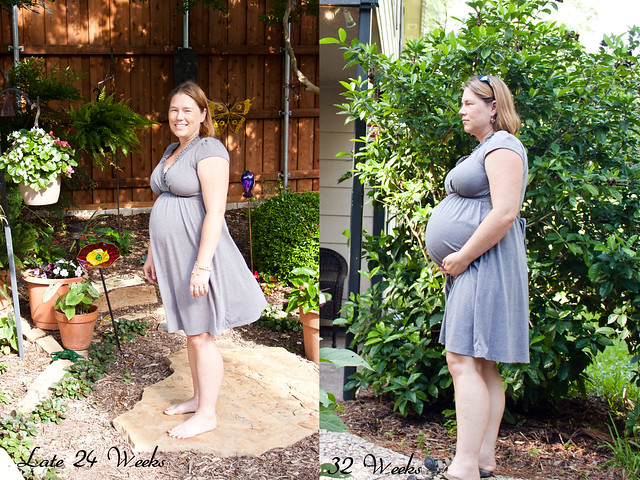 It’s nearly mid-July, not quite midsummer. When folks found out my due date was very early September everyone was all “Summer! Pregnant in the summer is going to be miserable!” Well, it hasn’t necessarily been miserable but it has definitely put a damper in my abilities to do a lot of things in the heat of the day. Really, it hasn’t been all that bad—so far—to be pregnant in the summer. We blessedly live in a time of air-conditioning so I can imagine even 60 years ago when A/C wasn’t as common that it would have been even worse. I think the only downside is not being able to work outside when I want, not that we’d be out in the heat of the day anyway.

Along with the heat has come swelling. Some days it isn’t so bad, other days, particularly if I’m standing a lot or doing any kind of yard work the previous day, the swelling is up around my ankles and my hands. Of course I get a little paranoid ’cause we all know what happened to Lady Sybil, but my blood pressure has been steady and not in the range of anything to worry about, I drink a ton of water, and have been trying to keep my legs up in the evenings when I come inside if I do any work outside.

As for Teddy, he’s definitely a growing boy. Dude has been far more active in the last month than in previous months and I’ve gotten a kick out of feeling him move around, especially when he sticks his back of butt right up against my abdomen. I give him a good pat or rub and say hello and usually he’ll adjust a bit. The fun and funny movement is when he makes a big movement and my entire belly just jiggles…the no-so-fun moments are when he kicks or pokes me for an extending period—must be stretching—it gets quite uncomfortable. At my 32 week appointment yesterday the midwife and the nurse both thought he was rather long, which I agree with. I can feel him all the way into regions that makes me think a hand is going to pop out to just under my right rib cage. It looks like I may get an ultrasound done at 36 weeks to gauge his size, though estimations by ultrasound for weight can be off by several pounds in either direction.

Anyway, I am still holding out for the first week of September, though I think in the back of a lot of people’s heads they are thinking it’ll be August. Ack! Either way, the countdown is really on because I know July will zip right on through.

Teddy’s room is painted and semi-organized. Chris is still finishing up the closet and the guest room closet which he should be able to finish between some work-field projects here by the end of the month. We have an uber-cute wall decal that we got off of Etsy that we will need to put up sometime the first of August—it was recommended to put it up at least a month after the walls had been painted for the paint to be completely dry. Curtains are hung, we have a zillion baby clothes, tons of items from our showers and hand-me-downs….this kid is prepared (though we still have some things to get). Mom on the other hand—-I’m starting to freak out a little bit.

What am I freaking out over? I’m going to have a kid that’s MINE that I don’t get to hand back to their parents at the end of the day…what if I can’t breastfeed…I took a natural childbirth class but I have no idea what labor is actually like…when am I going to go into labor…where am I going to go into labor…what if he comes in August…I hope I don’t become a shut-in for September and October and cry all the time…yes, crying is to be expected, but I want take him out and show him the world…every article about people leaving their kids in the car during the summertime has me paranoid…and I’ve already mentally told him he can’t ride his bike in the street because people zoom by too fast even though they shouldn’t…what if he turns out to be a girl and the ultrasound was wrong…the list goes on and on. I still hold that this whole ‘thing’ is weird. Weird that we will have our own child. We’ve been together since the very end of 1997…alone…all of that time. I’m sure he’ll be kind of some strange extension of ourselves, someone we’ll look at and go “OMG, that’s me” but someone who will definitely have his own personality and quirks.

And that’s where I am at these days. Tired, feeling ready but not really ready. Savoring all of the quiet moments that I can.