The inevitable first trimester question has returned with a vengence. How are you feeling? is the question of the day, hour, week, month, no matter if we just talked to or saw the person asking the question the day before. I get why people ask, they are interested in how things are going and are trying to make a conversation. But, it’s almost like asking a person who is sick that question—just a tad annoying. If anything, it has taught me not to ask any other pregnant woman that again.

So, how am I feeling?? Like I’m almost full-term pregnant in the heat of the Texas summer. In other words, just fine with plenty of aches and gripes, but nothing to worry about. I must be really huge because I’m just now getting comments from people when we’re out and about, with folks asking when I’m due and the sex of the baby. I hadn’t run into too many comments from people until these last few weeks, which has been totally nice since I’ve read all sorts of stories from other people about nosy strangers.

The countdown has started. Except that it feels like I still have for-ev-er to go. Months, not weeks. I’m 90% ready to be done, mostly because I’m tired of not being able to do anything outside in this heat. The tomatoes should have come down three weeks ago, the flower beds should have been weeded at least twice in July. I think the last time I went through there was in mid-June. I mean, in reality none of that is a priority, it isn’t like we need to live off of what we grow and well, weeds can be picked later. It’s just getting to be an eyesore, and it makes me feel like a slacker. And I feel bad for growing anything at all, like I’m just wasting the time and energy to attempt to grow it. Just another season of harvest down the drain.

Things I am *so* done with:
-Heartburn. I regret eating just about anything these days. It’s triumphant when I can go to bed or lay on the couch and realize 30 minutes later that I’m not dying from reflux burning my esophogus, which is a rare occassion. Seemingly harmless items like fruit sometimes comes back to haunt me–and forget salsa or spaghetti sauce, the biggest culprits of all.

-Swelling. I miss wearing my shoes. I’ve been wearing the same pair of flip-flops for over a month now. I wear them to work, when we do errands, around the house. I live in flip-flops. Yeah, I never expected not to be able to not wear my own shoes. If I go for a walk I have to super-loosen the laces on my running shoes and even then they are quite difficult to get on. The days I can look down and say, “Hey! I have ankles!” are great ones. Like two weekends ago when the high’s were only in the 80s, I somehow managed to have ankles the entire weekend. It was pretty fantastic!

-Feeling like a stranded turtle. I miss being able to utilize my abs to fling myself off my back and stand up. Turning over in bed is a workout in itself and then adjusting the belly to get comfortable is another ordeal. I know Chris is tired of my five pillows plus a body pillow taking up all of the space. In reality I could really use his two pillows, too.

-Tight spaces. You know what’s really fun? Getting out of a parked car in a parking lot when everyone parks sooooo close to the line. Pre-pregnancy I could squeeze in the belly and slide out the door if the space was tight but a lot of times now I’ll have to have Chris back out after we realize I’m not going to be able to get out without possibly hitting the car parked next to us with our door. And forget ducking behind someone in the kitchen, there’s just not enough space to do that anymore.

-Putting on anything below the waist. Crossing my legs to tie shoes, or like yesterday when I stubbed my toe on the landscaping bricks and in order to clean up the wound that occurred from that incident I needed to try to cross my legs to reach my toe—yeah that doesn’t happen anymore. And forget putting on pants or underwear while balancing on one foot to step through the hole. Balance? What’s that?

-Not being able to move freely and easily. Chores take longer now with a lot more breaks. Forget it if something falls on the floor, it takes so much effort to bend down or crouch down and then get myself back up again. Now that the dude is on his sprint towards becoming a watermelon, my back starts hurting if I stand too long doing certain chores around the house.

-Sweating while doing nothing. There was sweat rolling down my legs today at work. While I was sitting in a chair. It was gross. I gave up wearing any kind of pants back in June, it’s all about the airy dresses and shorts at the moment.

–This is a great thread that I like to lurk on with many other late pregnancy frustrations.

Things I’m looking forward to:
-Sleeping on my back. I know a lot of women write about wanting to sleep on their belly, but I’ve found that the side lying I do seems to sate that desire enough. What I really miss is laying on my back. I’ll sometimes let myself lie on my back for just a few minutes to quench the desire, but since you aren’t supposed to sleep on your back while pregnant because it can slow the blood flow to the uterus and cause issues, I keep that in mind and turn to my side after awhile. Also, sleeping on my back brings the snoring out even worse—so there’s that.

-Moving freely. Running, jumping, rolling…just not having to be conscious of a growing belly sounds good. I’m ready to work up a sweat, dig in the dirt, go for a hike…you name it.

-Showing Teddy the world. I can’t wait to take him on a tour of the yard, introduce the local wildlife, have him meet his big brother Leo and talk to him about his other brother Samson, to make him laugh, to blow on his cute little belly, to smell that delightful scent babies have, to show him how to garden, to take him on hikes…to just enjoy him!

Things I’m going to miss:
-The built in arm rest. Instead of resting my hands behind my back or crossing them, I can place them on top of my belly. It’s a pretty nifty arm rest!

-Feeling this dude inside me. It’s the craziest, coolest, surrealist thing to experience. Sure, sometimes he makes me umcomfortable by balling himself up against my ribs, but then I kind of tickle him and he moves back down so I can breathe. He’s a sweet little dude and I can’t wait to meet him, but I’m going to miss his hiccuping and kicks and general all around movements.

-Being pregnant. Yes, despite all of the gripes I have above, this has not been a bad pregnancy, at least compared to what I’ve read other women to have. It’s been an interesting experience and overall has been pretty fun and enjoyable. I get a kick out of looking at pictures from previous months to see how the belly has grown. It seems like I’ve always been this huge but in reality it has happened just a little bit, day by day. Back in December it seemed like September was a long ways off—and it was. Except, now it is only three weeks away. This time last year we were beginning to contemplate going down this road to parenthood and here we are a year later with a baby almost fully gestated. Craziness!

Here’s some self portraits I took at the end of 35 weeks: 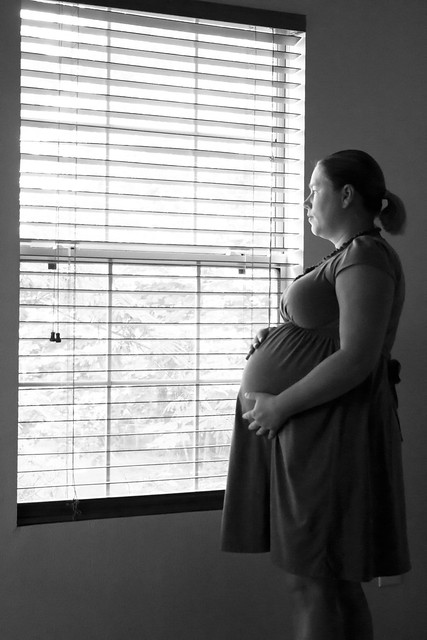 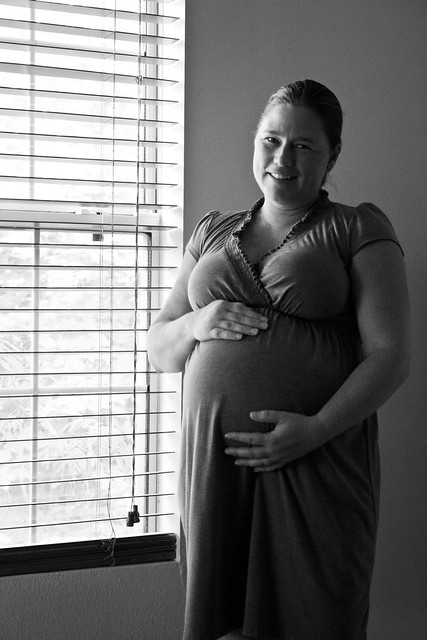 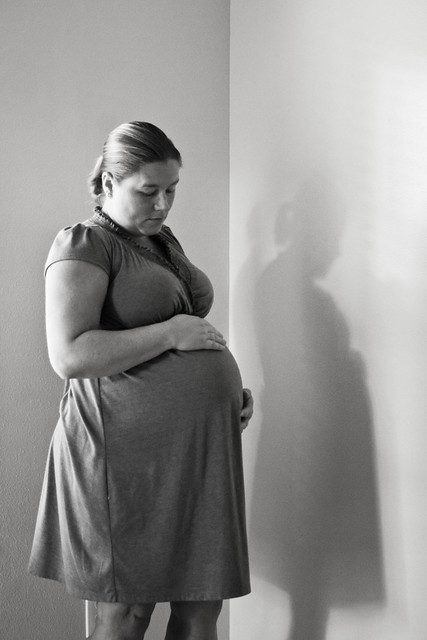 I think I’ll do another post later this week (don’t hold me to it!) about products I’m getting together to use for post-pregnancy—for myself or for the baby.