Last week I said I would talk about some of the products I’m looking forward to trying post-pregnancy. Here’s a run-down of some of them. 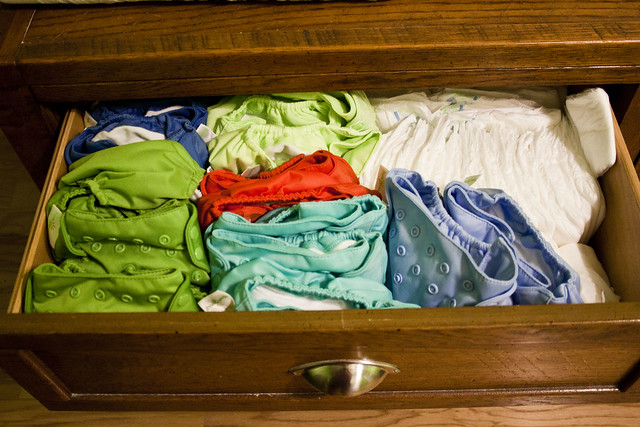 Bumgenius Freetime cloth diapers: This is probably the biggest product of all that I’m looking forward to trying. We won’t be starting the cloth diapering until the baby’s meconium has gone, so several days after he is born, maybe even a week or so since we have a ton of newborn sized diapers I got with a diaper cake a friend of mine made me for one of my showers. Of course we’ll be keeping a small amount of disposable diapers on hand for occassions when a cloth diaper isn’t going to be handy to use, but we’ll be making our best efforts to use only the cloth diapers.

I’m not sure how other cloth diapering families experienced it, but when people asked what we still needed from our registry we always replied “cloth diapers”…and yet, there was some kind of mental resistance in getting diapers. I think cute outfits always trump practicality! That said, we did receive some diapers, and I know that part of that mental resistance is likely associated with the initial cost of buying just one diaper compared to a box of diapers, but over the lifetime of using diapers for 1-3 years, depending on when your child is potty trained, the cost of cloth is by far the cheaper and less environmentally destructive option out there. In all we have 20 Bumgenius Freetime diapers to start with some other hand-me-down types from our friend Tracy that we can try too. 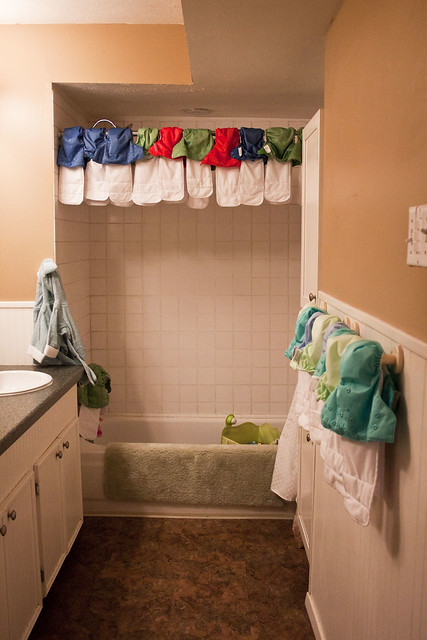 Once we had all of the diapers I pre-washed them all per the instructions on the label. Bumgenius recommended washing the dark colored diapers, I think it was 6 or 7 times to prevent color bleeding onto the lighter diapers later on. I washed the light colored ones once as per the suggestion on the label. After doing a lot of reading about cloth diapers it can take a few washes for the full absorbency to take hold. Drying them did take awhile, a full day to dry. It isn’t recommended to put them in the dryer, though I did see many blogs with people doing that and putting them on low. I think the issue is that the diapers just might not last nearly as long than if they were line dried. I think next time I’ll try an extra spin cycle to get rid of extra moisture in the inserts. The outside of the diapers actually dried pretty fast, it was the inserts that took the longest. Part of the issue might have also been that I had 20 diapers hanging up in the bathroom so they didn’t get a ton of air flow between each diaper when in reality I will probably be washing 8-10 diapers at a time, not 20. In the cooler times of the year I will likely hang them outside to speed the drying time. I wasn’t sure how long it would take to dry in our humidity, which is why I didn’t bother hanging them outside this time around.

Next in the diaper realm is finding an appropriate detergent to use. Typically we buy Seventh Generation Free and Clear and have bought Ecos free and clear in the past, mostly because they are septic-safe and environmentally friendlier. However upon reading, the Seventh Generation isn’t cloth diaper safe due to enzymes and other ingredients that cause detergent build-up in the diapers. There are whole lists of diaper safe detergents and opinions abound on each one. The Ecos brand is actually listed by Cotton Babies, the owners of Bum Genius, as safe to use but after reading around there seems to be a lot of people complaining it doesn’t work well with hard water, which we have. I guess the issue with that is the diapers can build up a stink pretty easily and the Ecos doesn’t get it out well with hard water. I was excited to be able to use that, and we still may, since I can get it at several grocery stores by me and can use it on all of our clothes instead of having to buy something separate for the diapers. On the other hand, a lot of people rave about the Rockin’ Green brand of detergent. They also have separate formulas for various water types, which might be worth trying, and if I’m only using it for diapers then it should last awhile. Here’s one detergent chart and another. If you have opinions on detergents please let me know! 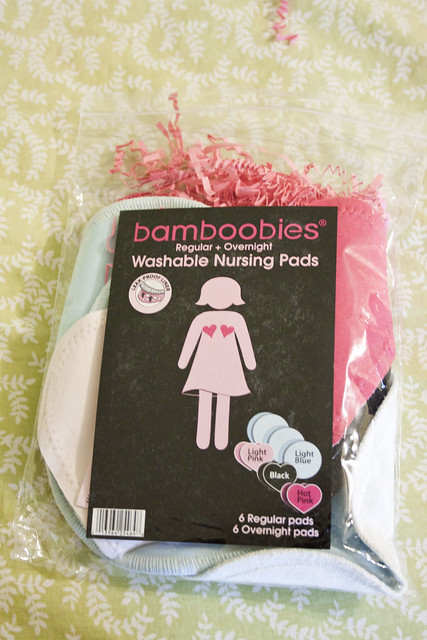 Bamboobies Nursing Pads: I read a lot of good things about these reusable nursing pads. I did end up buying a box of disposable pads by Lansinoh as well. I tried out one of the heart shaped ones and it seemed to lay flat enough…I guess we’ll see when I actually put them into use! 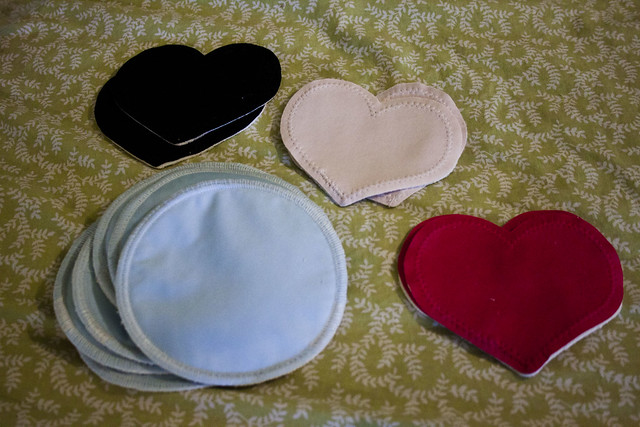 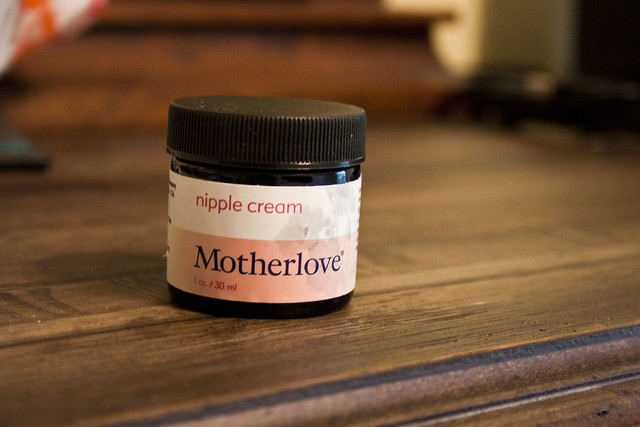 Motherlove Nipple Cream: A lot of people recommended lanolin but after doing some reading it appears to stain as well as be quite thick to put on. The next two recommended creams were by Earth Mama Angel Baby and Motherlove, and while both had great ratings and reviews I ended up going with the latter due to its ratings with the Environmental Working Group. We’ll see how it works!

Oh, I did just get gifted a pair of Lily Padz nursing pads. They are made out of silicone and are not absorbing, instead they are supposed to hold the milk in. After reading some reviews, I’m a little bit skeptical but will try them out. Most people say to wait 4-6 weeks to use them because they can inhibit milk production. I guess the upside to using these is that many people sleep in them because they allow you to sleep without needing a bra (to use other nursing pads, you need a bra to hold the pads on).

I guess that’s about it for now. Got any recommendations?

Hoping to do a 38 week check-in tomorrow!