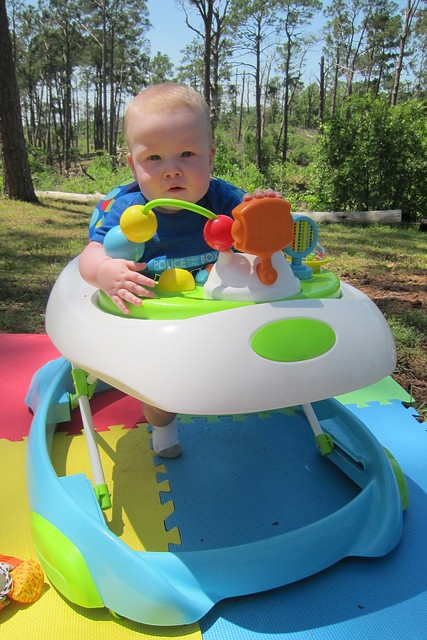 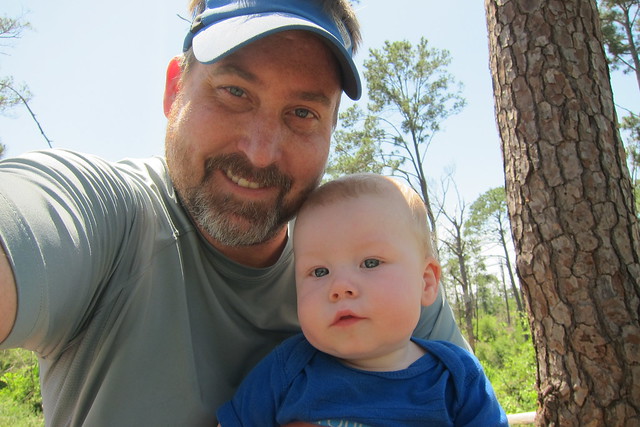 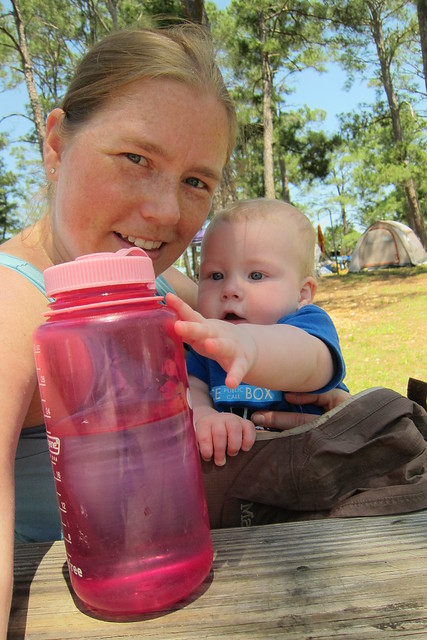 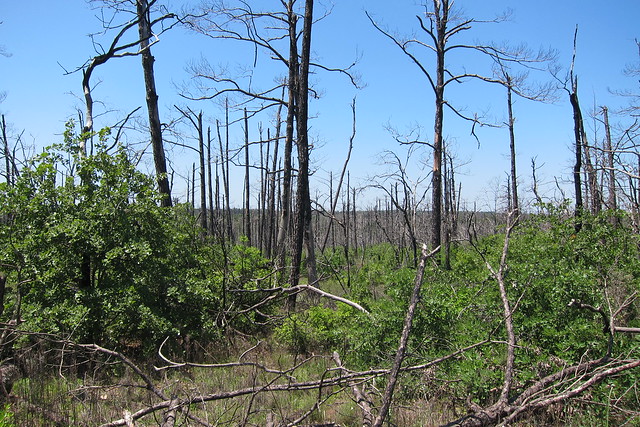 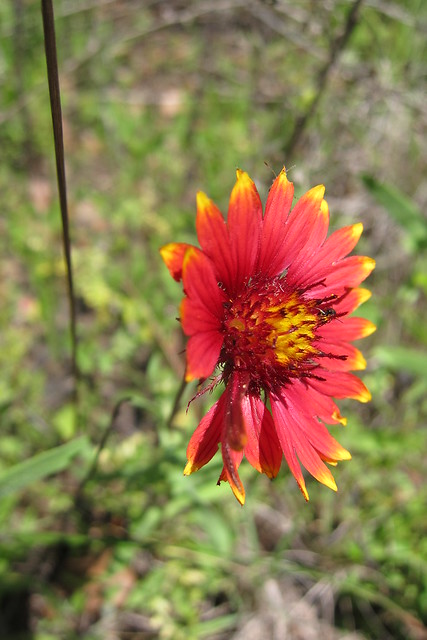 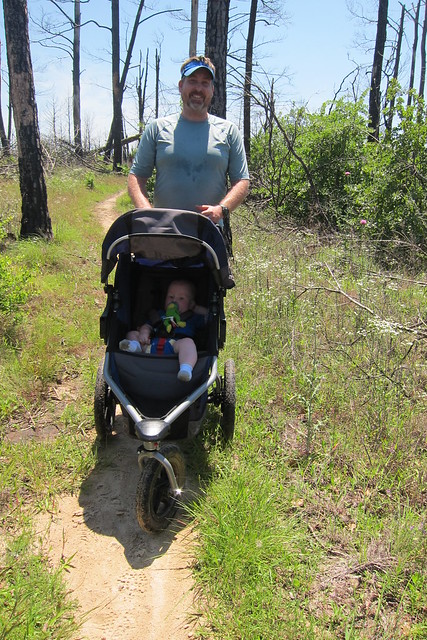 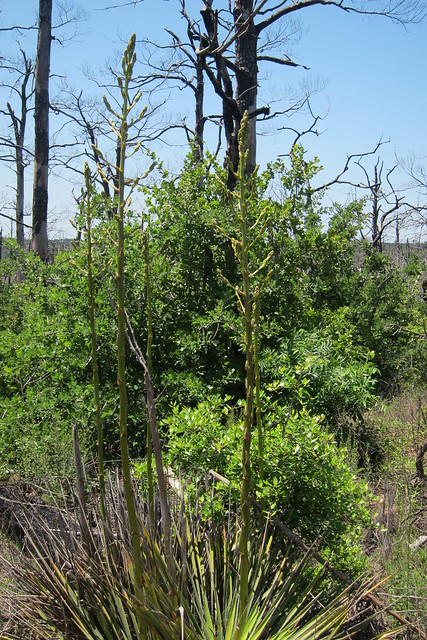 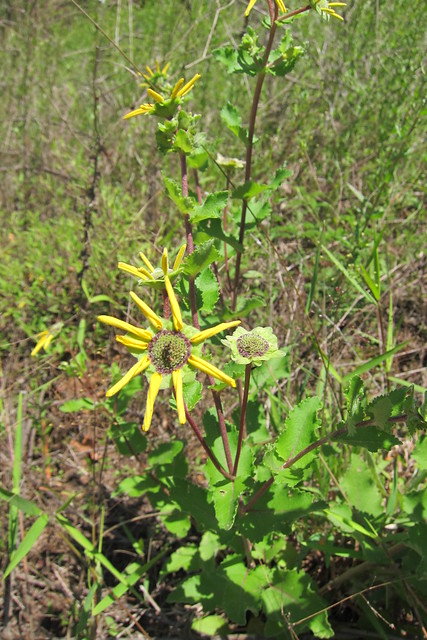 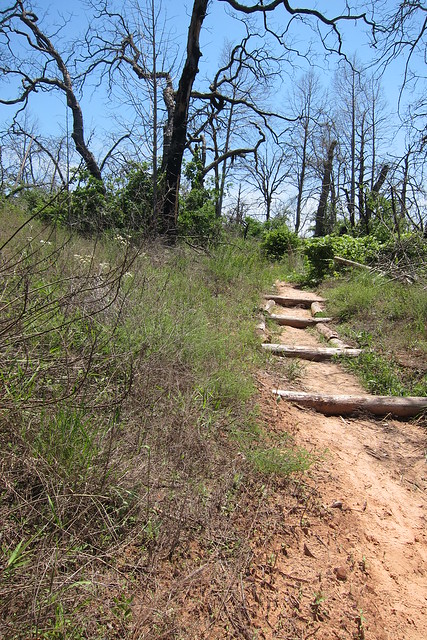 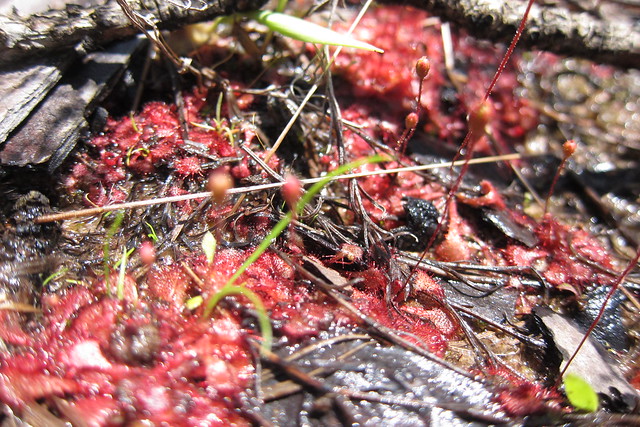 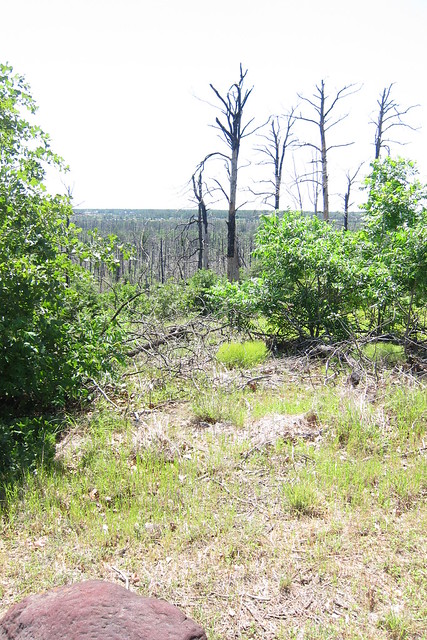 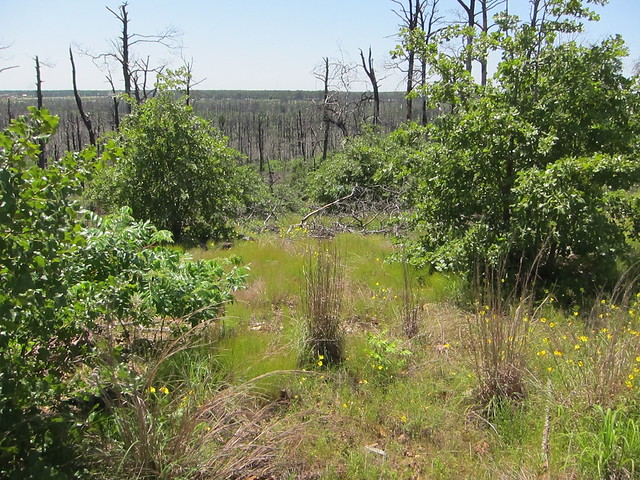 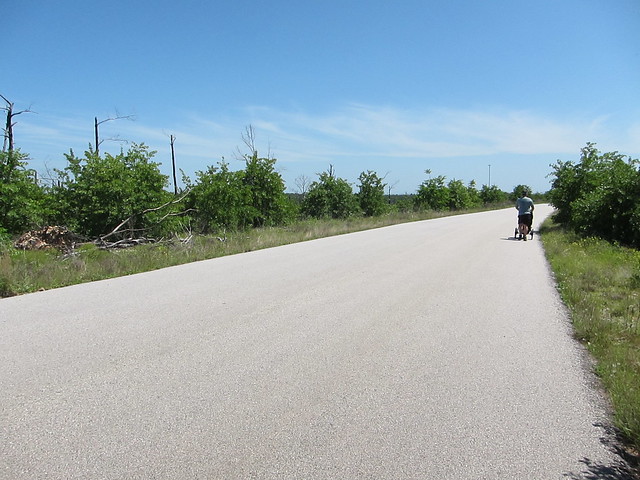 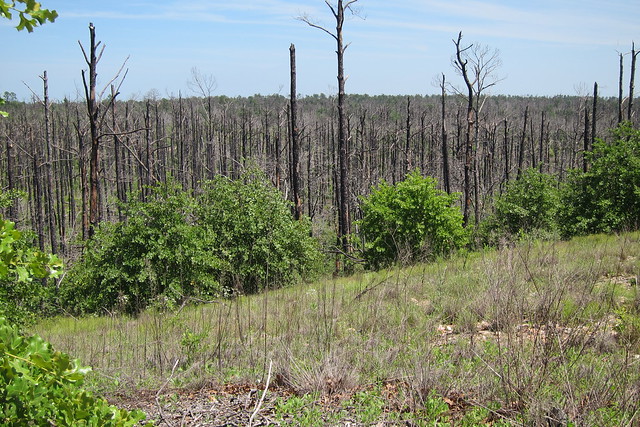 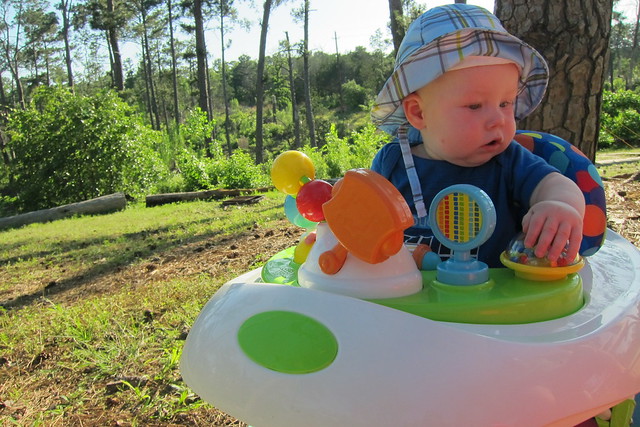 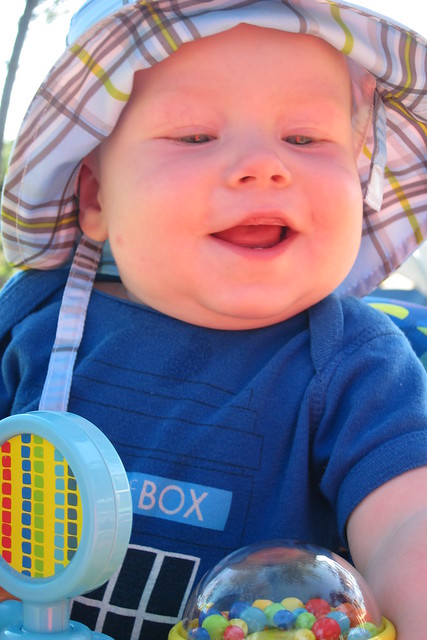 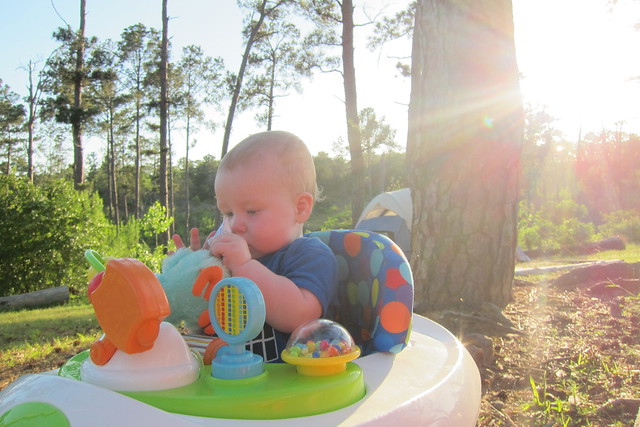 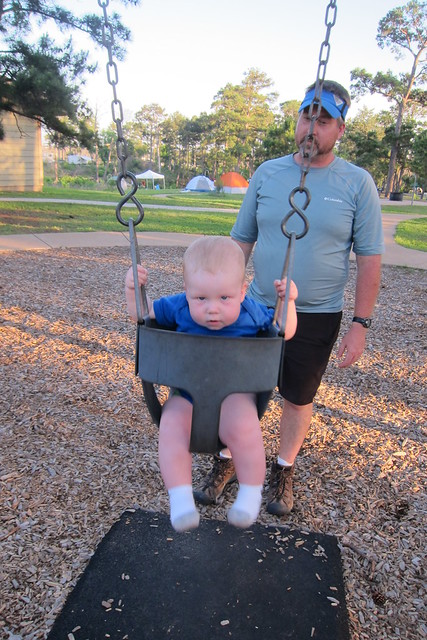 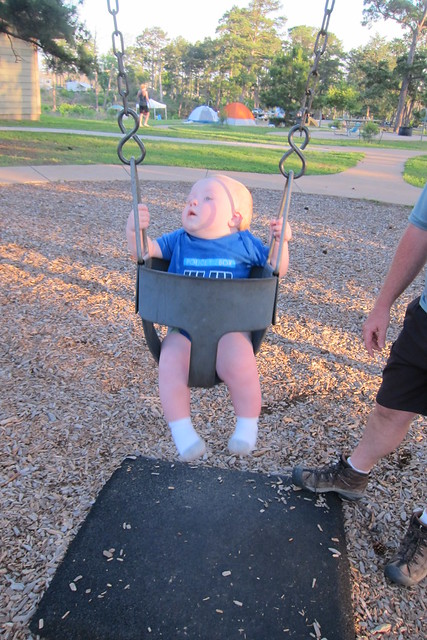 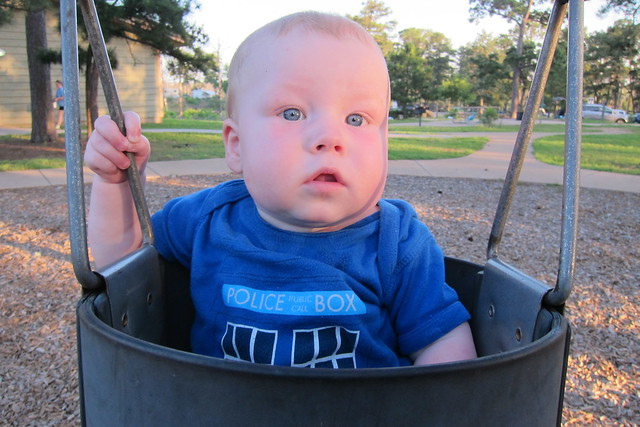 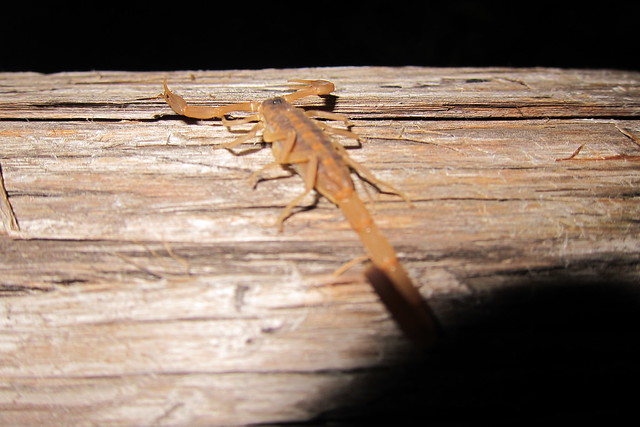 Two weekends ago we finally went on our first family camping trip. We’ve tried to go a few times this spring but have had to cancel at the last minute for a variety of reasons. A weekend opened up and Chris was able to find a site at Bastrop State Park for one night. This state park and about 30,000 other acres were burned heavily back in September 2011. The area is very slowly recovering but much of the ‘lost pines’ that the area is known for was torched and is left standing as only canopyless pine logs. It’s pretty devastating and I can only imagine how gorgeous the area was before the fire.

The state park is about 2 hours from our house, so it is a relatively easy drive down US 290 towards Austin for us. We arrived before lunch and opted to stop at the local Buc-ee’s to pick up lunch so we wouldn’t have to worry about making lunch at camp while we set up. As this was going to be Forest’s first campout, I was worried how it was all going to work. Car camping in itself is always a big pain, it’s like setting up your own house outside for a weekend. After backpacking so long and having only what we need tucked into a pack, car camping can be a headache. Car camping with an 8 month old is even more headache inducing because now there are not only his diapers and clothes but toys to entertain him. Forest is in the stage of playing on the floor and has started crawling and I could only imagine how much fun it was going to be watching him. Yes, we had a playpen for him but he only likes being in that so long, so I had Chris pack up his walker. That worked out really great! Normally Forest gets a bit whiny after awhile in the walker but he sat in it for far longer than normal, I think because he was enamored with being outside.

After we had the campsite set up and lunch was eaten we looked at the trail map to figure out where we would go hike. The campsite still had some tree coverage, though it was rather thin, but not far in the ravines you could see the remnants of where the fire had reached. It was already reaching towards the low 90s that day and I was glad I’d recently bought some baby sunscreen for Forest. But, I’d left his hat at home. We’d been planning on putting him in our Osprey backpack carrier to test it out but Forest was also in the mood for a nap and Chris didn’t think that he’d be able to sleep in the carrier. We were also noticing that the sun was going to quickly burn the kid so we opted for the stroller on the hike instead. We’ve got a Bob stroller and have taken it on other trails before and have really enjoyed it. We figured the trails wouldn’t be that bad as trails in state parks tend to be overly maintained and almost highway like at times. Oh, we were in for it.

We drove around to the parking area for where we were going to catch the trail, there are multiple entry points and loops that can be done, and saw then just how devastating the fire had been at the park. It also revealed just how much topography the park had, something that isn’t really visible from the road. There was some terrain! Once on the trail we found quagmire after quagmire, downed logs, erosion, runoff from recent rain and from seeps. Chris tried to power through with the stroller a few times but a lot of the time I had to assist with lifting the stroller over difficult spots. As soon as we were on the trail, too, we were glad we had opted for the stroller. The openness of the lost tree canopy allowed the late April sun to beat down on us as if it was early June. It was hot and we were going to get a sunburn.

The trail was pretty nice, just not stroller friendly, but we made it. It would have been a pretty awesome hike pre-fire, and I can only imagine how goregous it had been. We had a super steep push up to the road at the end, coming out half a mile or so north of where we’d parked. By the time we got to the car we’d decided that it was hot enough for us to want to think about getting a tent canopy for the campsite and headed off to Walmart. Our other reasoning was for some respite from the heat. We piddled around Walmart for an hour or so, a store we rarely go to, buying a canopy and a hat for Forest. As we headed back for the campsite it was still early so we decided to drive the scenic Park Road 1C over to Buescher State Park. This back entry park road connects the two parks via some private land and really showed us the extent and devastation of the fire.

The drive through Buescher was great as this park had not burned. It had some pines but it was more bottomland-y in some parts than I would have expected. We decided we’d come hike over here the following day.

Back at camp we made dinner. Our go-to easy camping dinner are those Bertolli frozen meals since all you have to do is heat them on a skillet. We passed some more time putting Forest on his first playground swing and then I attempted to get him to go to sleep. He’s used to going to bed about 7pm but it’s all dark where I put him to sleep. It was not dark yet and we still had over an hour until the sun set that night and Forest was *not* interested in going to sleep. Instead we were up with him until almost 8:45 and by then I was done, too, so once he was asleep I went off to dreamland as well. Chris went exploring after we were in bed, looking for the elusive Houston toad. Their last stronghold is in the Bastrop area. He didn’t find any toads but did find that scorpion.