I meant to get this up a week ago but we went on vacation and the house we were at had horrible wifi, so…no post. 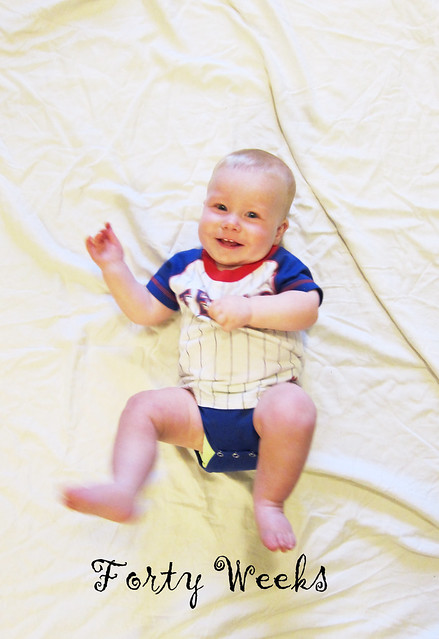 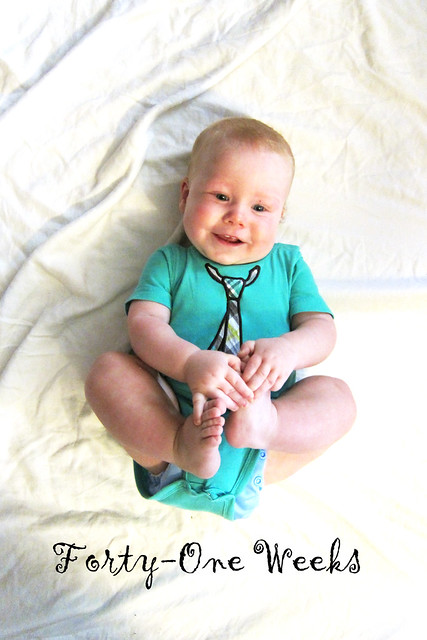 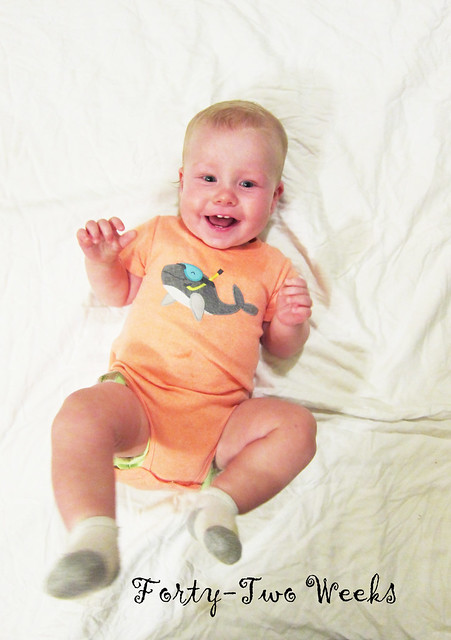 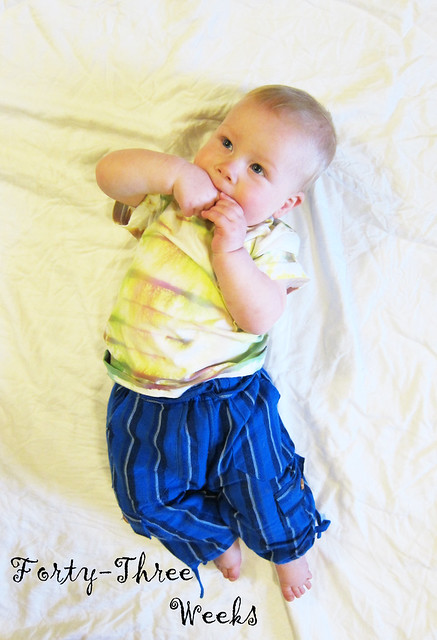 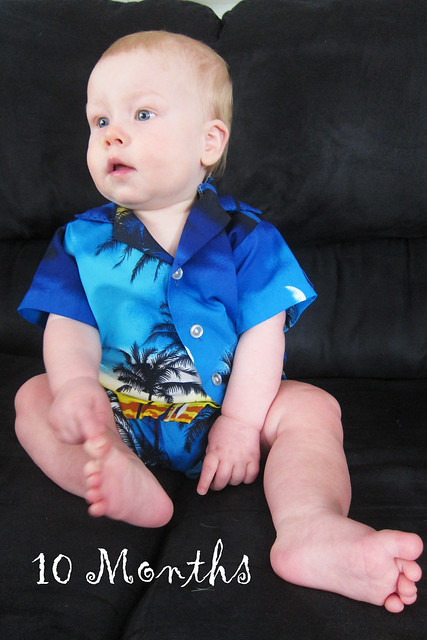 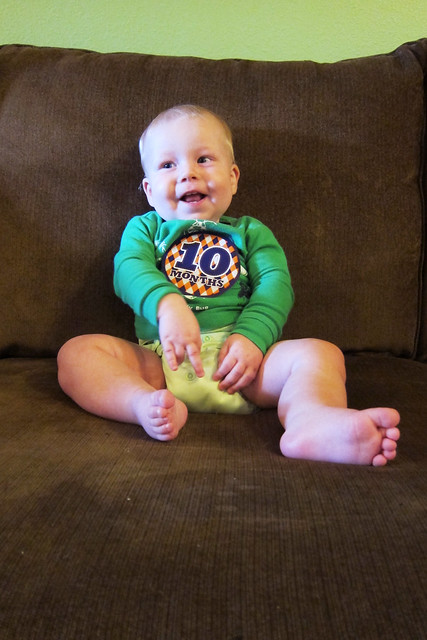 This last month Forest has changed a lot! So much to write about! I think I’ll go for bullet points and go from there….

Finally, the kid is taking to food. Still not 100% on textures but he is now gobbling food up like no other. He’s eating, usually, two jars of food or two packets of food at daycare. I guess we should probably start making some food now that he’s eating better, but baby food is just so convenient. I typically buy the brands that don’t have a lot of added ingredients, like the Beechnut Naturals or Earth’s Best, and attempt to get organic ones if they are available and especially if they are on sale. In the evenings he eats maybe 1/4 to 1/2 a jar of food, mostly because he nurses when he gets home and probably isn’t that hungry. We have started introducing table food again but he just plays with it so far, though he does try to put it in his mouth only to change his mind at the last minute and then drop it into his lap.

To coincide with eating more food at daycare he has been dropping how many bottles he takes at daycare. It has to be at least a month now since he’s had four bottles at daycare, which was usually 20 ounces. Now if he’s had two, 10 ounces, it’s a good day, and three is just luck. Sometimes he’s barely finishing the second one when I pick him up. I’m thinking I may need to let them introduce water to him after he eats to quench a bit of thirst. He’s been drinking water from open cups and sippy cups with us at home here and there and loves water.

Regarding sippy cups, I bought two several months ago and he hasn’t taken to either one. What he has taken to are the old school Tupperware sippy cups. I’m pretty sure it’s because he can actually get liquid out of it easy and the cups aren’t some magical spill proof container like the others.

Oh, and with the increase in food, let’s just say diapers are a lot different now. *crinkles nose*

When he’s with me he’s still nursing like a champ but he’s definitely spreading it further out than he used to. However sometimes he’ll do little cluster feeding sessions because he gets a bit to eat and gets distracted and wants more a little while later. He’s definitely not dropping nursing sessions right now and we’re still nursing 2-4 times at night. A few weeks ago it had been on my mind to go through and figure out exactly how much milk I had stored up. At that time I added up 740 ounces of milk which translates to 5.8 gallons. Some of it was getting on the older side and Chris was pushing me to donate it because we weren’t going through it fast enough. I mentioned my Facebook break in my reading post the other day, but figuring out how to donate it required me to jump on Facebook so I could access the breastfeeding group to get help from others in the area. I managed to put blinders on and only went to the group (success!) and found a few milk banks I could donate to. Then someone commented that they knew of someone privately that needed milk. I ended up giving her my email so the person could get in contact with me and after we exchanged a series of emails and texts I was able to give her and her daughter 190 ounces of milk! She was going to be having surgery in a few weeks which would put her out of commission for several days in the hospital plus up to a week after on medications, and coupled with a lower supply than I had which resulted in no milk stash, she was definitely in need of milk! I think in the future when I need to donate I will opt for the milk bank as it turns out you can give milk up to, it was either 7 or 10 months old. Since I’m still pumping roughly the same amount I have been, maybe an ounce or two less, but he’s drinking far less, I will still be freezing a lot.

Oh man, we have definitely hit a sleep regression phase. I savored the nursing to sleep phase of this for as long as I could but that’s not always working. One night I could tell Forest was just so sleepy but he did not/could not go to sleep. He usually hits the sack anywhere between 6:30 and 7:30 pm but it was almost 10pm that night. As soon as he went to sleep, I did too. I decided next time he put up that much of a fight I wasn’t going to press him as hard to go to sleep because I ended up not getting anything I needed to do, done. Naps are becoming spotty. Times where he would definitely go down for a nap right around 9-10am, he’s pushing it back another hour or so. From what I’ve read about this sleep regression, it’s really a ‘progression’ because of all of the new things he’s learning and for some reason they want to practice these things while they are going down for sleep. The night he stayed up until 10pm I watched him go from being ok with laying there while I patted his pack to just promptly sitting up like he wasn’t sleepy at all. And tonight I watched as he twisted and turned and stuck his butt in the air, tried to stand up, before finally settling down enough to close his eyes and sleep. Phew, it’s rough. I definitely dream of the day where he understands to lay down and close his eyes and just lay peacefully, asleep or not, and I can walk away. I’ve tried that right now and it doesn’t work. He’s a hysterical crier, not a crier who calms down after a bit. So, I sit with him and rub his back and wipe his forehead and try to be as patient as I can be. That’s all if nursing him doesn’t work. If he falls asleep awhile nursing I’m like, “YES!”, and all is right with the world for the time being.

Right at the beginning of 9 months he started sitting up from being on his belly. It was like overnight he just started doing it. He hasn’t looked back! Ok, well, there are a few times he get’s whiny in his crib when he’s been playing with hit toys and he’s flailing there on his belly wanting someone to come get him. But for the most part he can get from his belly to sitting up and back to his belly with no problems.

He still army crawls, though sometimes he gets up on his knees like he’s going to crawl-crawl, but doesn’t. He’s also a speed demon with the army crawling and makes a beeline for anything that looks like he shouldn’t be getting, which is why he now hangs out in his crib to play a lot more than he used to while we are trying to get stuff done around the house. When he was less mobile he was perfectly find on the living room floor. Now, not so much.

As with the sitting up he started figuring out how to pull himself up about two or three weeks go, getting into a position on his knees in the crib. He’s then gnaw on the crib railing while looking utterly adorable! Just this last week he’s progressed onto standing completely in his crib, with lots of crashes down after he gets too wobbly. Yes, it is time to lower the mattress in the crib! This is really his only area in our house to practice pulling up as we don’t have a lot of low furniture, like coffee tables, for him to practice with. I feel confident he will be walking by his birthday, though. Maybe not perfectly but I’m pretty sure we’ll be chasing him a lot more!

Vocally he’s not saying any definite words, though I think he said ‘Hi’ the other day. Still a lot of ma ma, da da sounds, and lots of growling, screaming, yelling, LOUD boy noises!

At his 9 month appointment it was found he had yet another ear infection, or the one he had before that in early May just hadn’t cleared up. He was given another round of antibiotics and now that he’s a smarty pants, Forest is great at clamping his lips shut when we try to syringe the medicine in his mouth. He had a follow up appointment later in the month and it was shown that the ear’s had cleared up, however he was on the beginning stages at that time of another cold that he has since passed onto me (working into an 11 month post here, so I’ll stop there…). Also, at the tail end of June I came down with some kind of stomach bug which I thought initially was food related but two days later it appeared in Forest. I think I counted 8 times of being barfed on in 16 hours and at least one barf incident on Chris. I kicked myself a few days later when I went through his medicine to prepare for vacation and realized I had a bottle of anti-nausea medicine from another illness earlier in the spring that I could have used. *note to self*: use it next time! Unfortunately he got sick right at the time we were going to make a trip to Dallas to see some of Chris’ family, so we had to postpone that trip a few weeks.

I guess that’s about it…here’s some videos and a few other photos from the month! 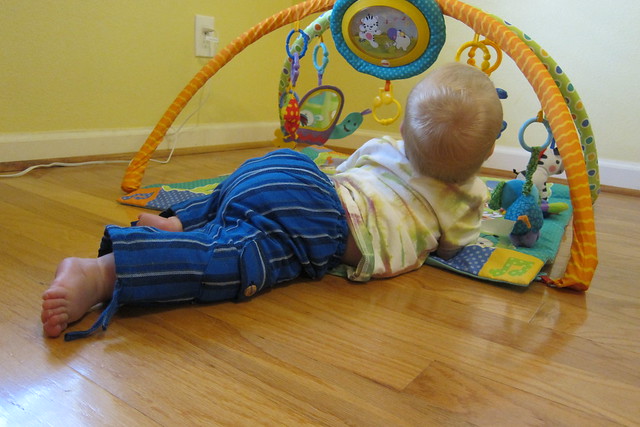 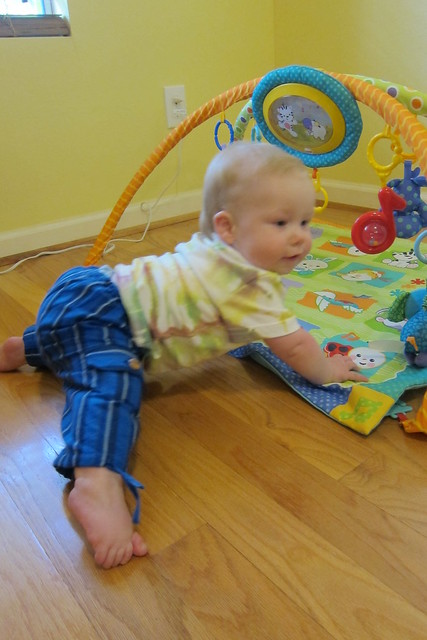 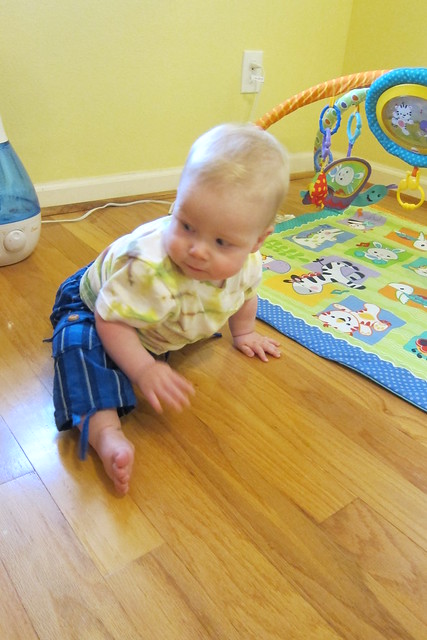 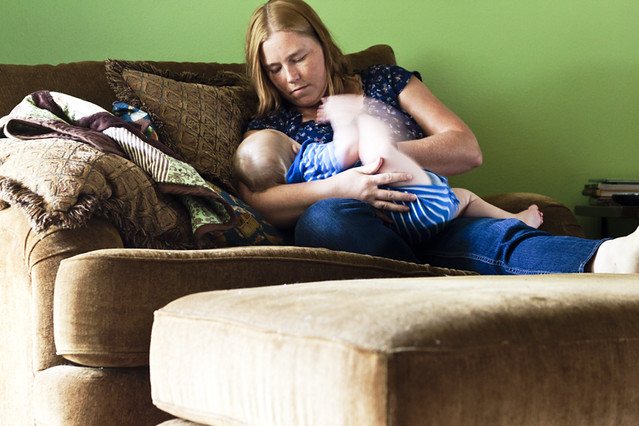 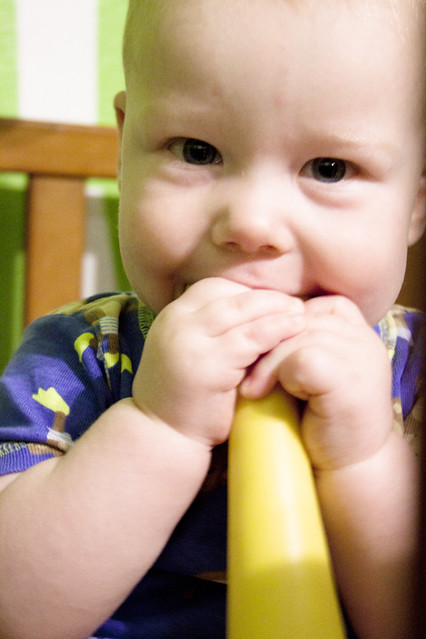 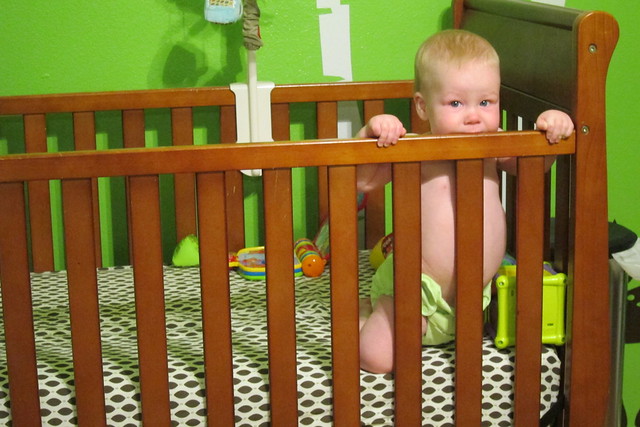 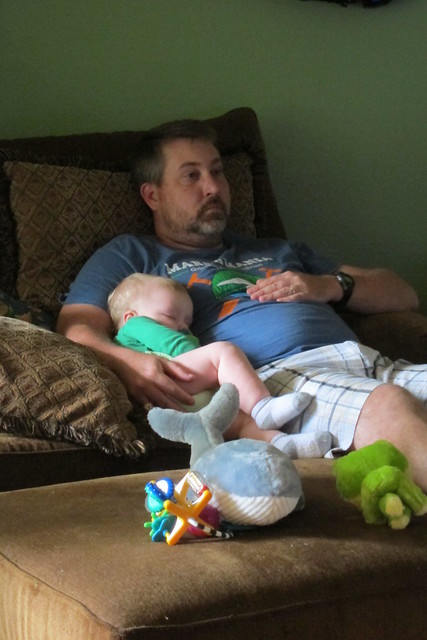 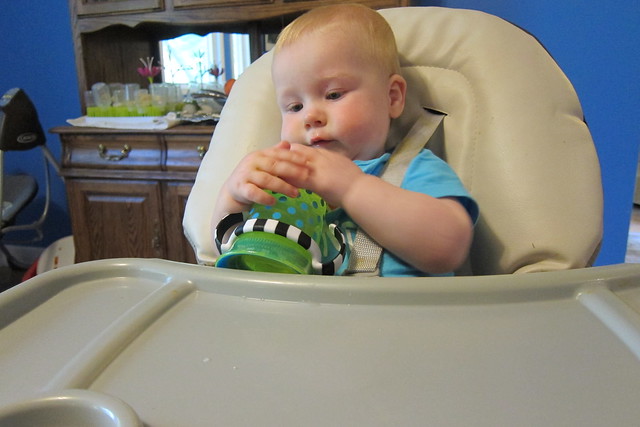