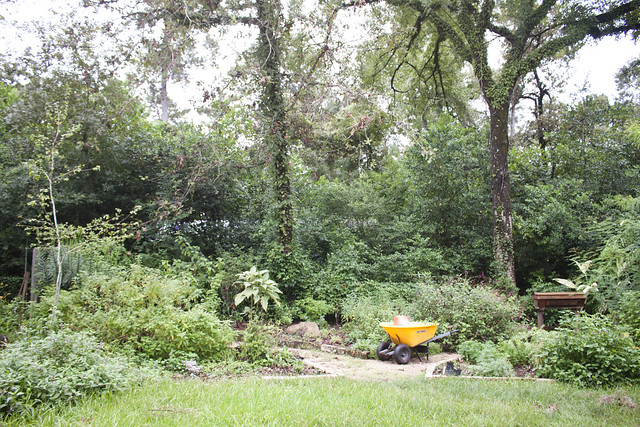 It’s never a perfect scenario weather wise, right? Too hot, too cold, too wet, too dry. Spring flooding, summer drought. But we got a nice break in the drought over the weekend with rain. Rain that’s now forecast daily until early next week. Which is good for the most part but also puts a damper in finalizing summer gardening chores, pulling those ‘last’ weeds, etc. The wheelbarrow has been sitting in that spot for over a week with little activity. 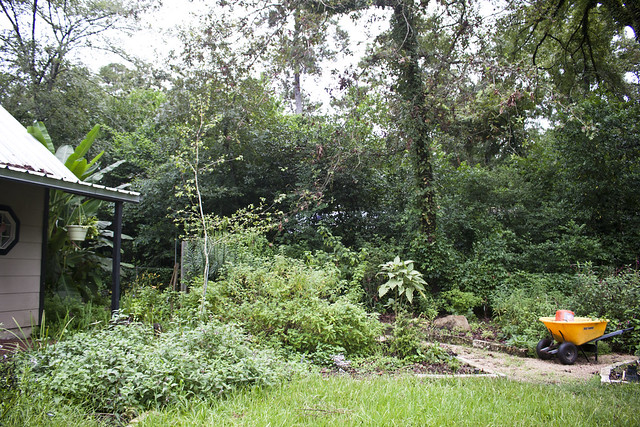 From a distance the garden looks good. You can’t see the weeds and it is evident that the yard needs to be mowed but the mower is on the fritz again and Chris has to work on it sometime. 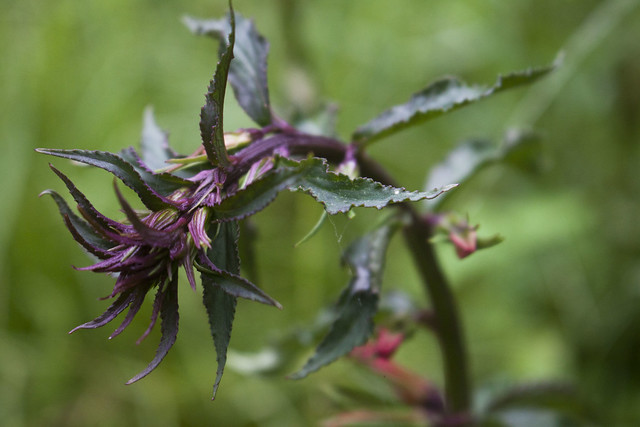 It’s almost time for the cardinal flowers to bloom. I keep seeing them pop up in other people’s blogs and photos so I had to check when we saw them last year while hiking in Sam Houston NF. It was mid-late September. I know there’s a range in blooming, but it does seem early for blooms to be starting int he garden. There’s a lot that seems early this year: schoolhouse lilies, monarchs, hummingbirds to name a few. I hope that doesn’t mean a rough winter. 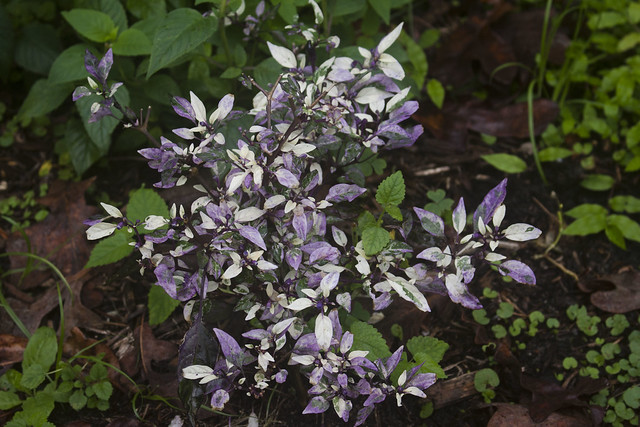 I really like this ornamental pepper I bought back in June at Marshall Grain. Ornamental edible plants definitely add texture to the garden. 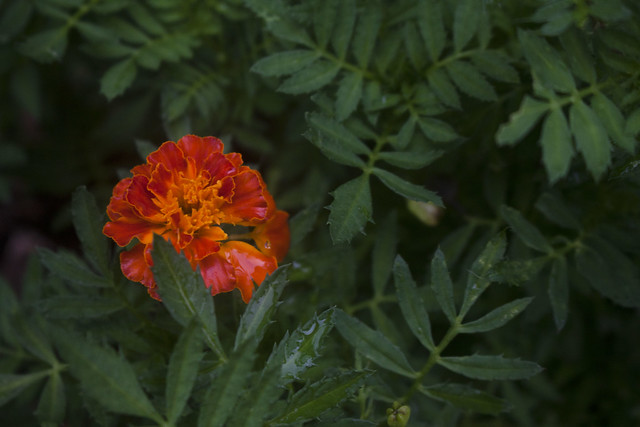 I’ve noticed marigolds can be hit or miss for us but the ones we planted this year have done really well. When I brush up against them as I weed I’m instantly taken back to my growing-up years and my mom’s marigolds. She planted them every year and we would save up the seed heads in bags or just pull them off and play with the seeds as they floated to the ground below where they would reseed the following year. Marigold perfume…I wonder if it would be too overwhelming? Hmmm! 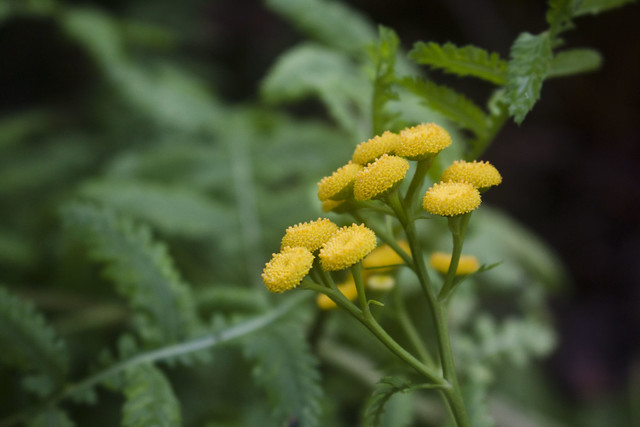 The tansy likes to get a little out of control and when it isn’t blooming it looks a bit messy. It’s blooming now and for that I’m happy! 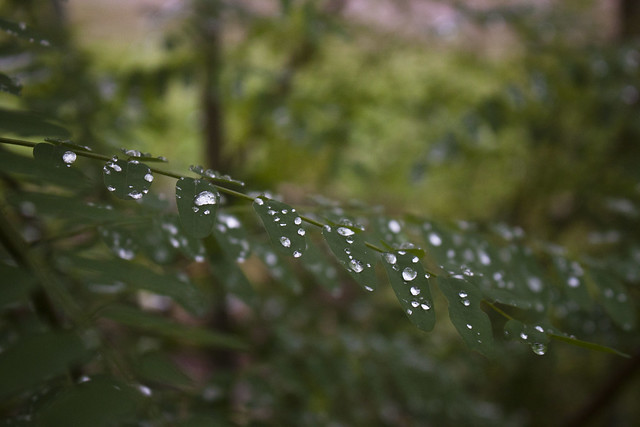 Raindrops on the Amorpha fruticosa. 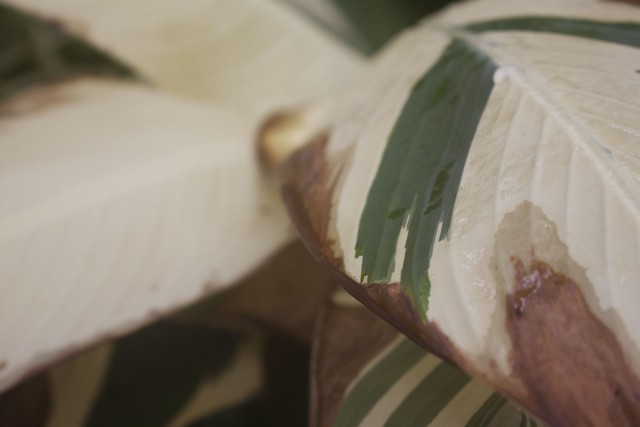 Ever since Chris cut back some trees that were hanging over the fence back near the beehive the variegated cannas are doing much better. They probably need a bit more sun than they are getting but they do add a great ‘pop’ back there in that corner of the garden. 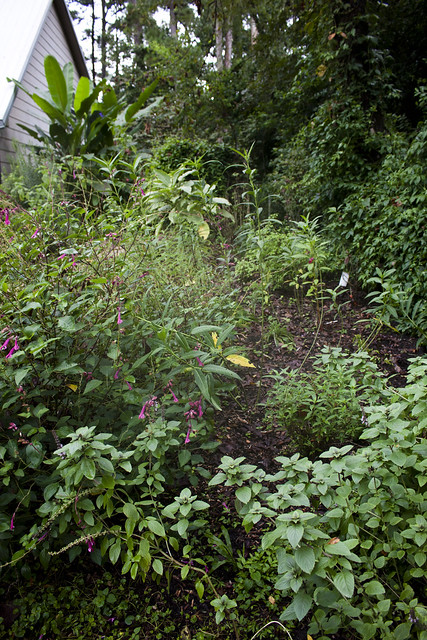 Speaking of the beehive area, here’s a shot looking east-ish from that viewpoint. 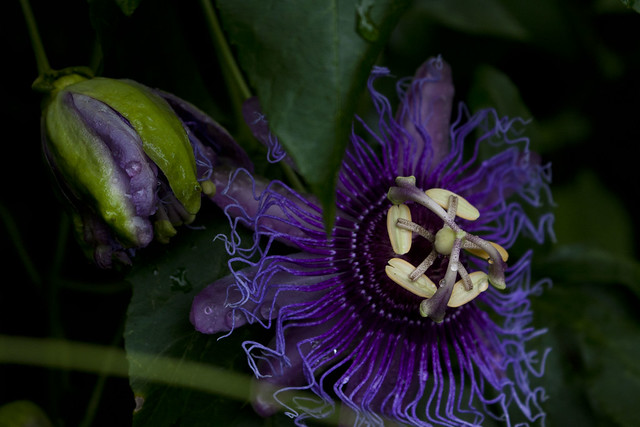 The Passiflora ‘incense’ has done a great job of covering the fence this year, which is what I wanted it to do. However, at the end of the growing season I think I’m going to cut it back to tame it a bit but also so Chris can fix the fence that was busted during one of the spring storms when a branch fell on it. 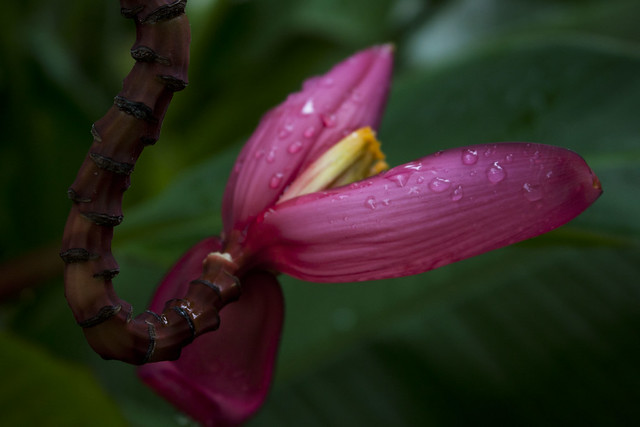 Back in the the ‘tropical’ section of the garden, the pink bananas are blooming still. We dug a few of these up for my parents back in the spring and they have even bloomed in their yard much to their delight! 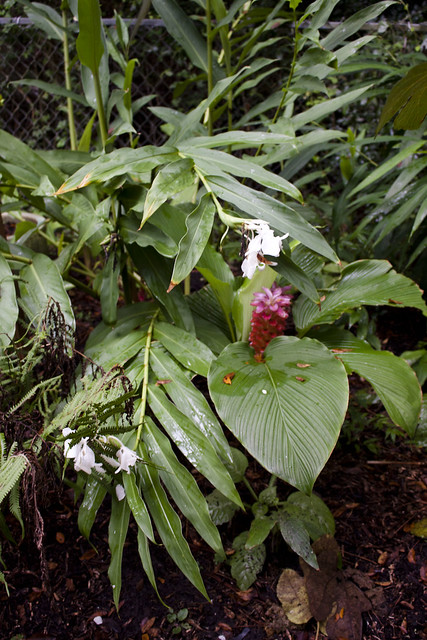 Butterfly ginger and an untagged ginger near the potting bench, still showing off their blooms. 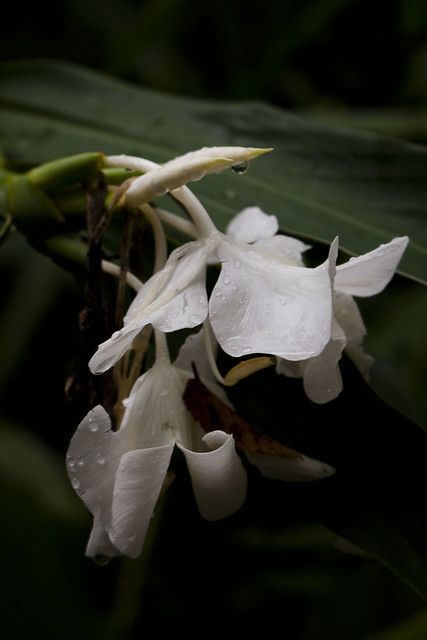 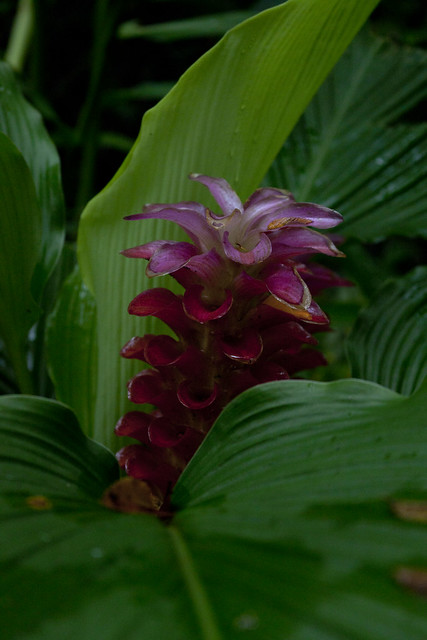 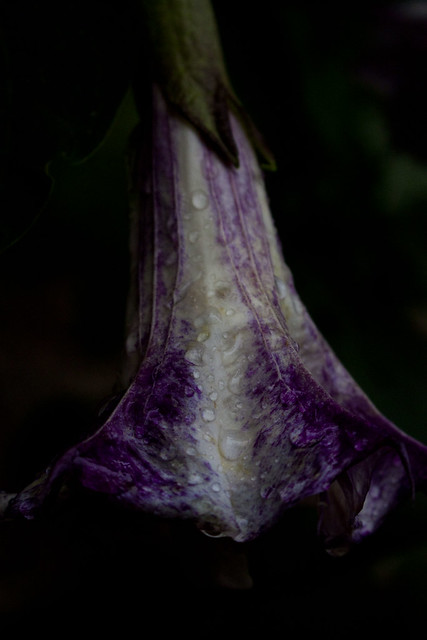 Last year the daturas got a little unruly but this year I feel like we have just the right amount and they are trimmed up well. 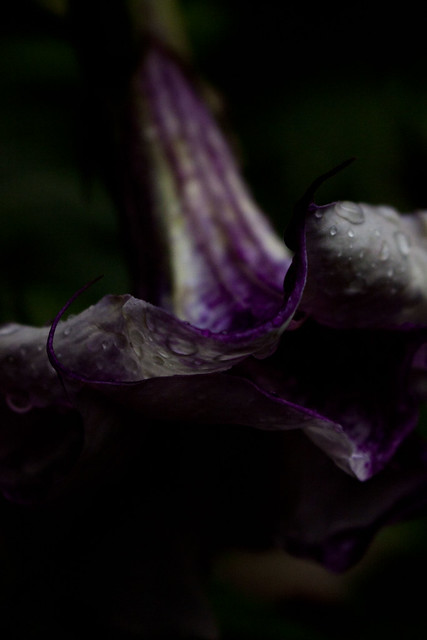 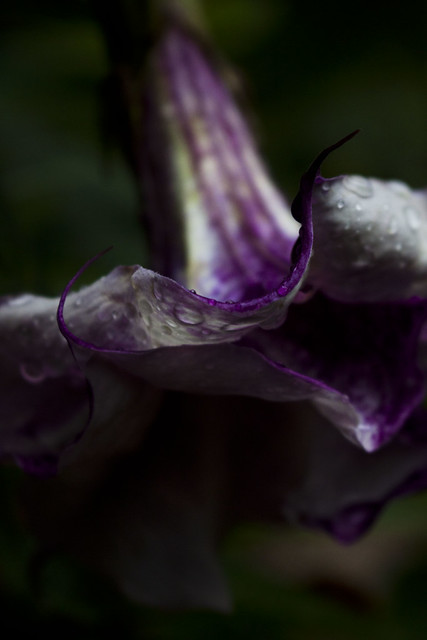 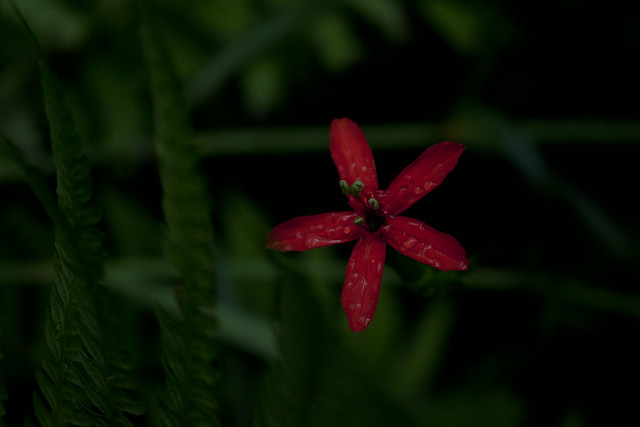 On the potting bench are several pots of scarlet catch-fly that need to be put in the ground. That hasn’t prevented them from blooming anyway! 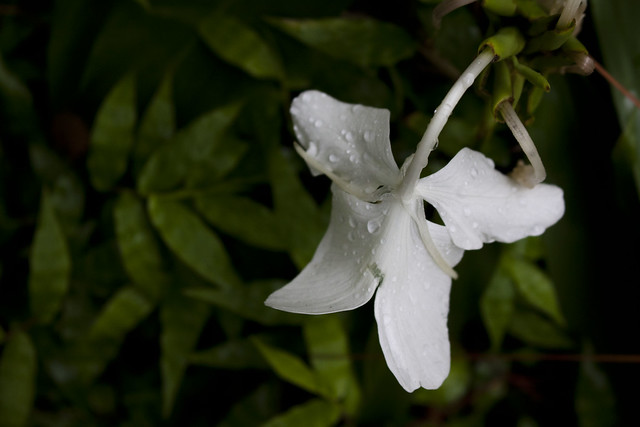 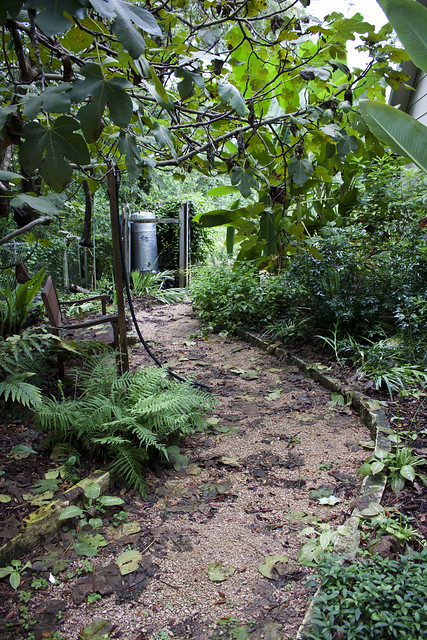 I just raked the path a week or so ago but its time to do it again! Several plants sprout up in the pathway and I need to pull and pot a few so I can share with a few people. 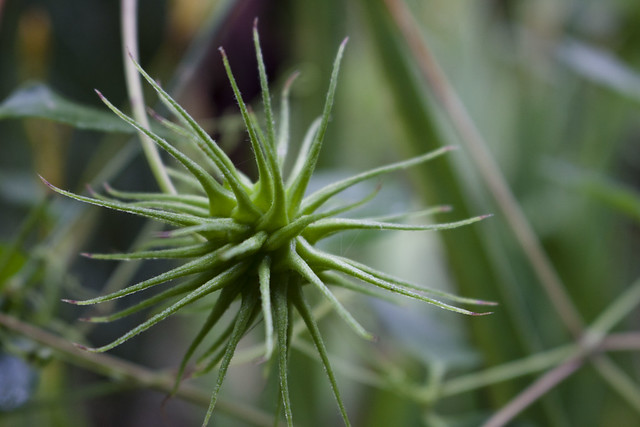 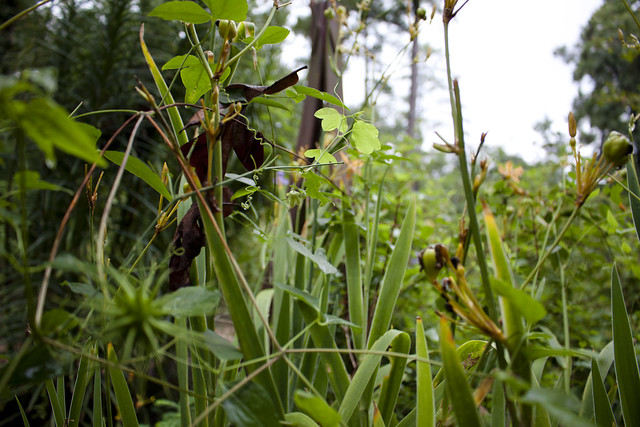 And a jungle looking view from down below at the clematis and blackberry lilies.

The garden looks good, just a bit unkempt but that’s the way things are right now!

One thought on “Rainy Garden”