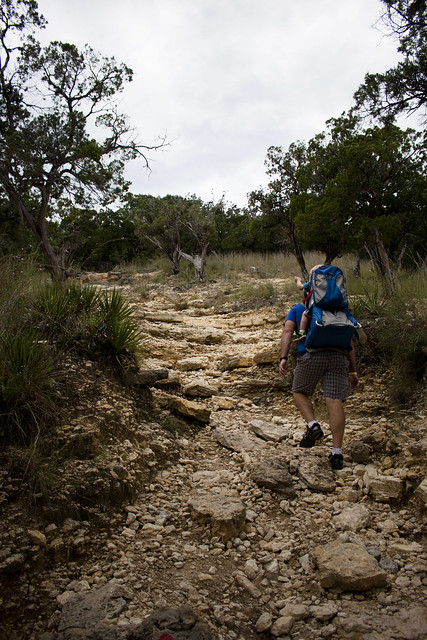 Our hike up to Old Baldy last weekend did not start well. We hadn’t been hiking all summer and so it was an adjustment for Forest to get back into the backpack and for Chris to carry him. The trouble started when we left the very busy Pecan Grove camping area to head up the trail when Forest began wailing and throwing himself all over the backpack. Not only is this uncomfortable for Chris, Forest was also trying to sneak his arms out from under the straps and trying to escape. It took us a few minutes to realize he wanted to people watch at the campground instead of going down the trail. We opted to appease him for a few minutes, walking down to the camp store and around the campground before attempting our hike up the trail to Old Baldy. That still didn’t help enough because the first quarter mile of the hike all you could hear was a wailing toddler. 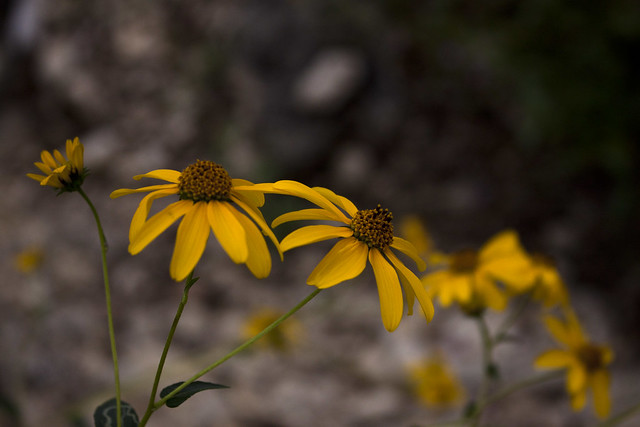 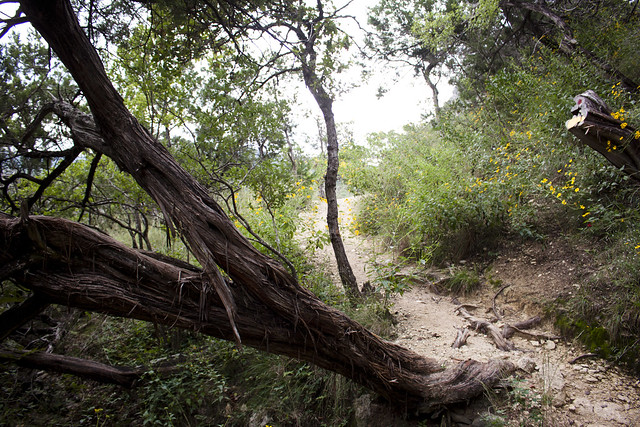 Eventually he did calm down, which greatly helped our sanity and hiking enjoyment. The Old Baldy trail is probably the most popular trail in the park despite it being one of the steepest. Once at the top you get a spectacular view of the surrounding Hill Country! 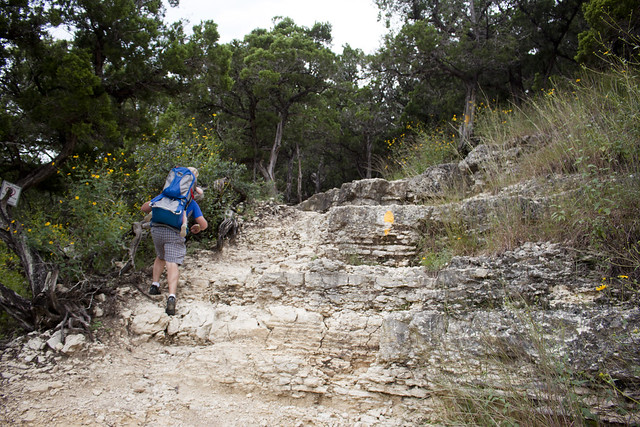 Having not done any hiking in awhile, there were definitely some strenuous moments along the trail. A few spots required three and four points of contact, particularly when hiking back down. All of that did not deter quite a flow of people to use the trail. 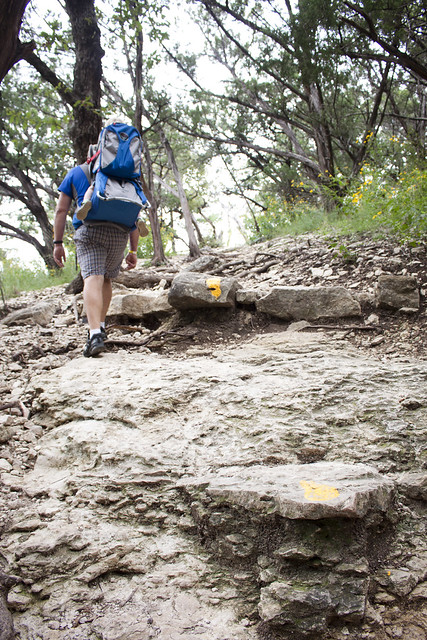 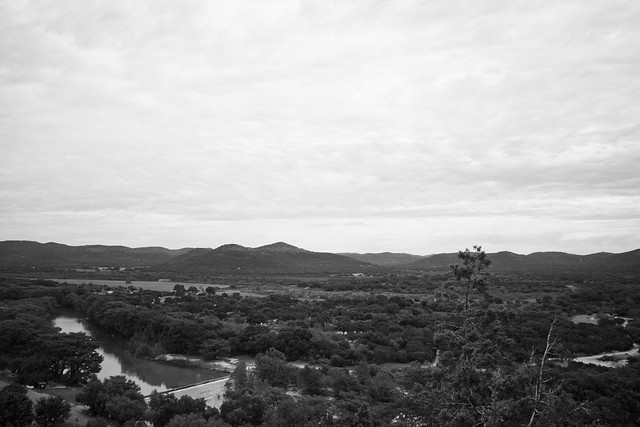 A view of the Frio River. 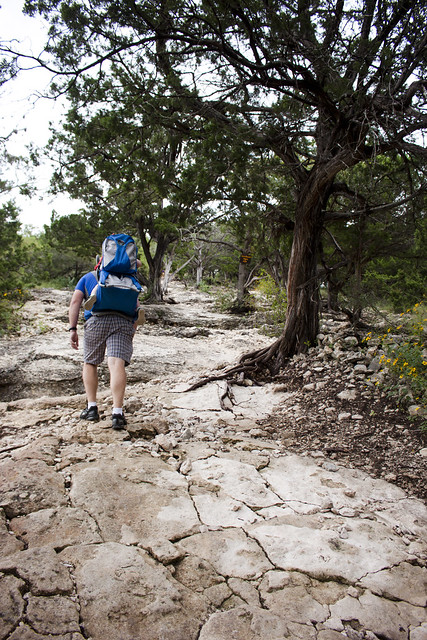 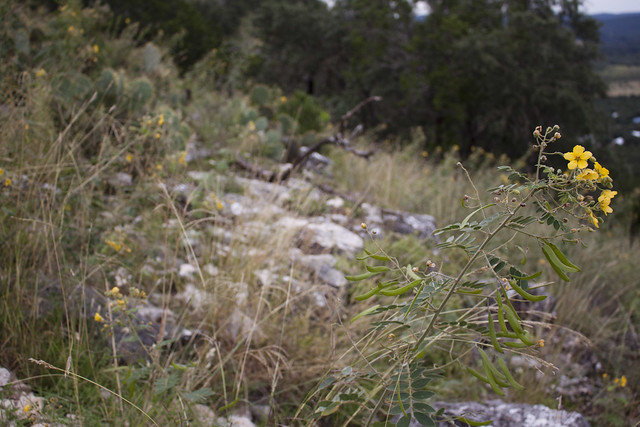 Along the trail were quite a bit of fall blooming wildflowers coloring the landscape. 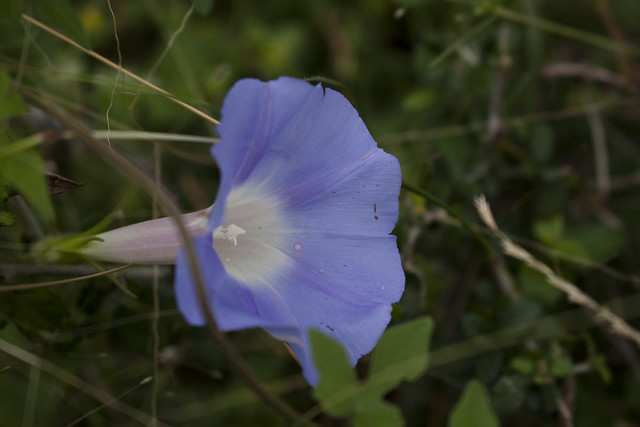 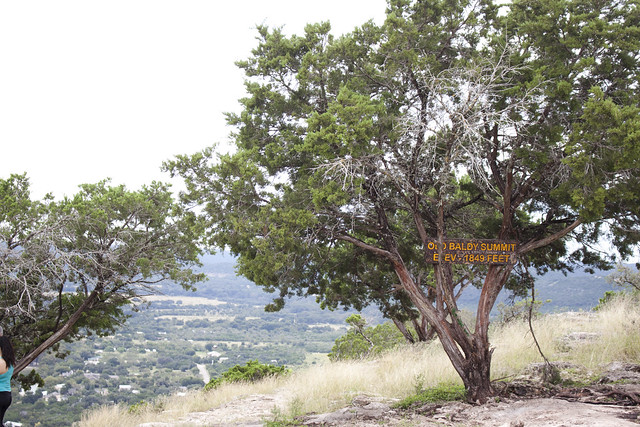 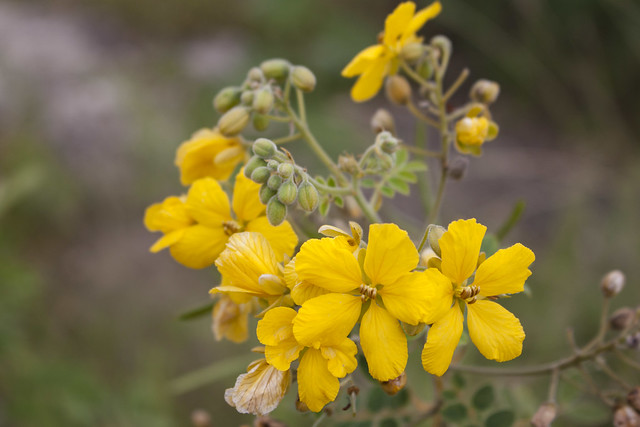 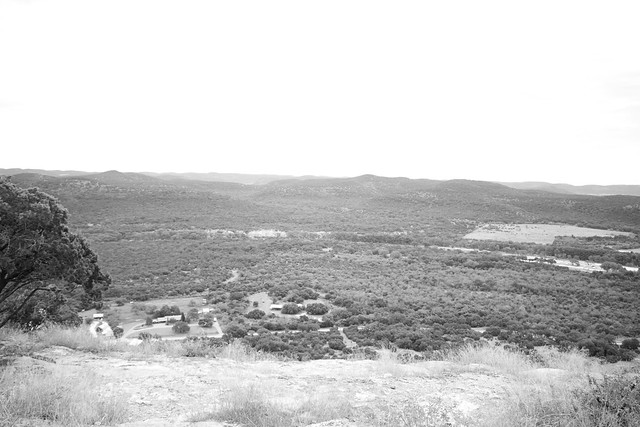 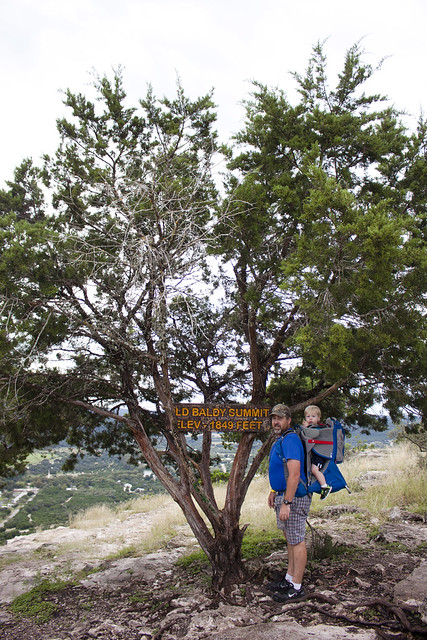 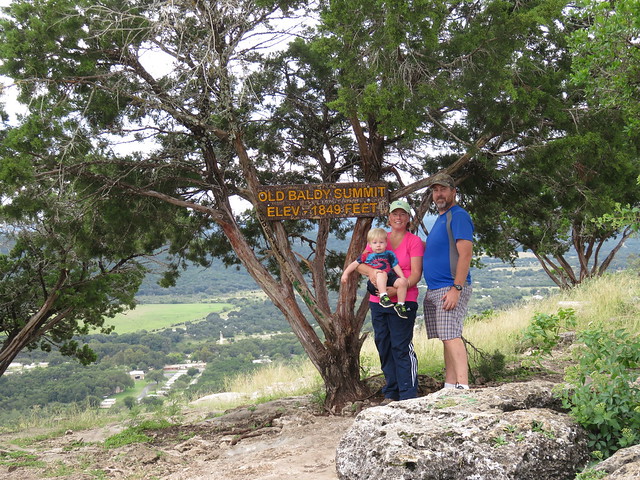 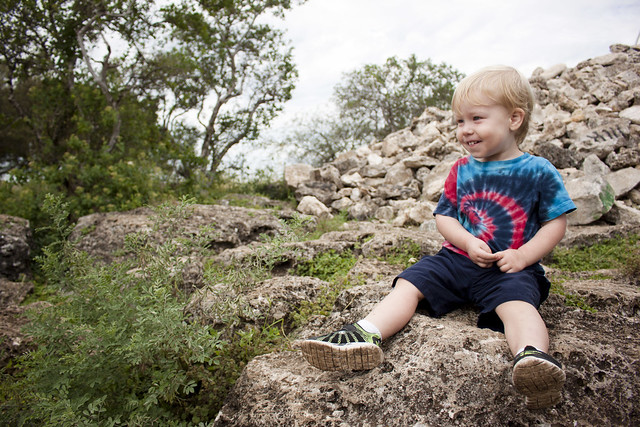 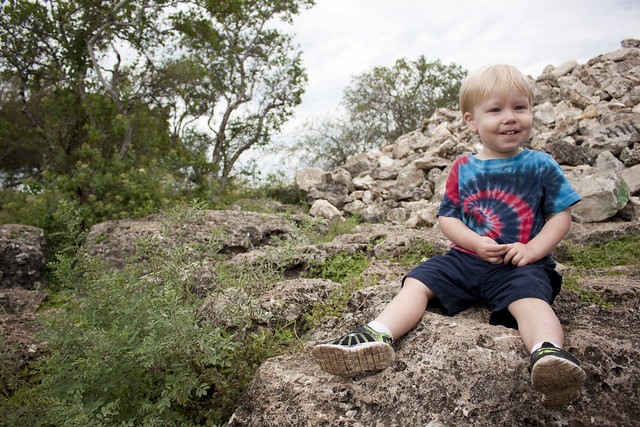 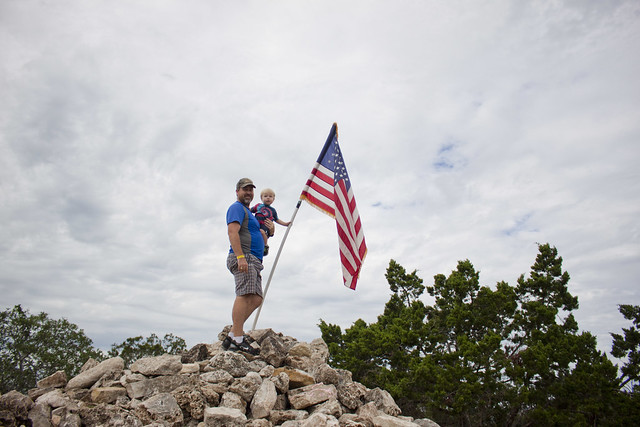 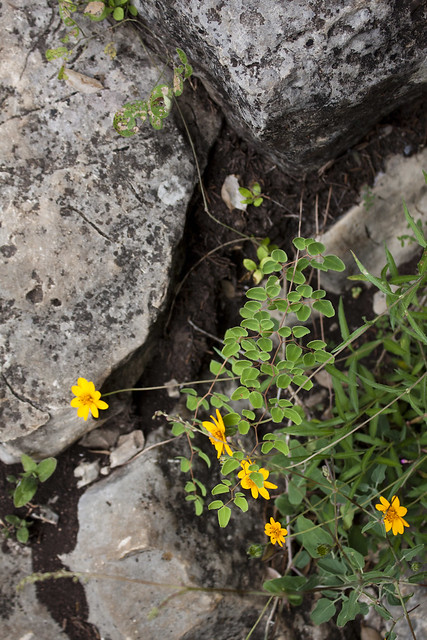 Our descent back to the campground included hiking the Foshee Trail to connect a loop with the Bird and White Rock Cave Trails. Both of those trails were relatively quiet compared to the Old Baldy trail. 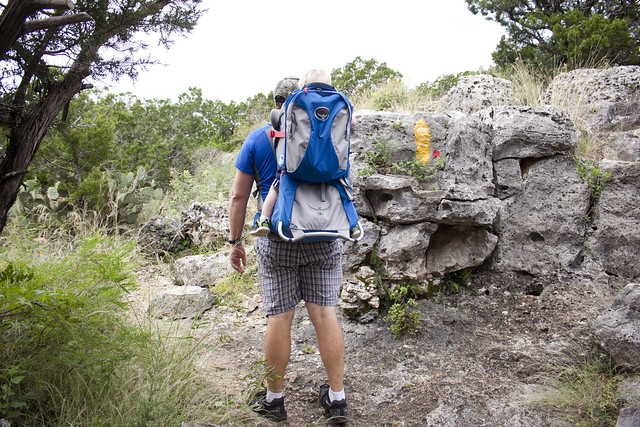 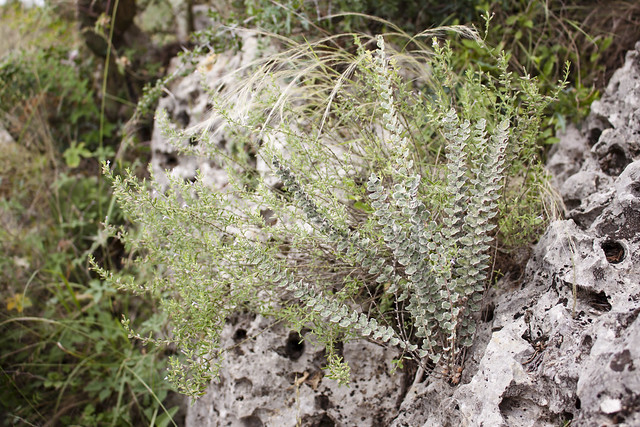 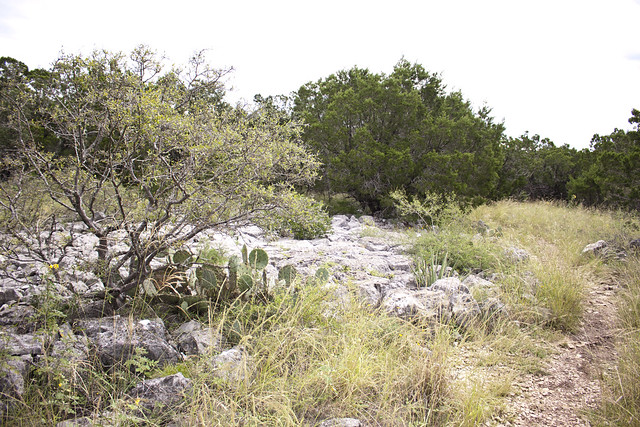 Most of the trail along the Foshee Trail included quiet ridge walking with a few undulations in terrain. The Bird Trail was steeper as it connected back down to the White Rock Cave Trail. 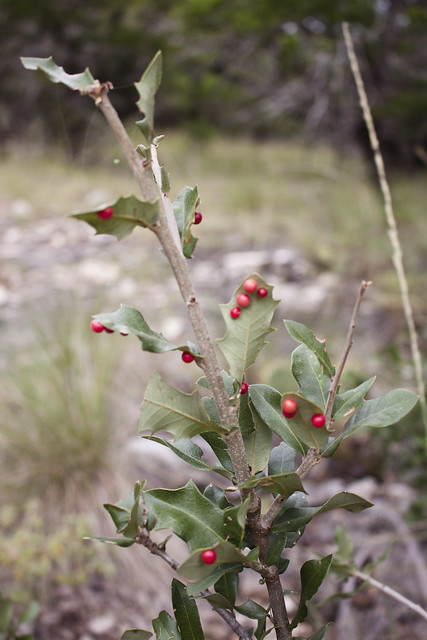 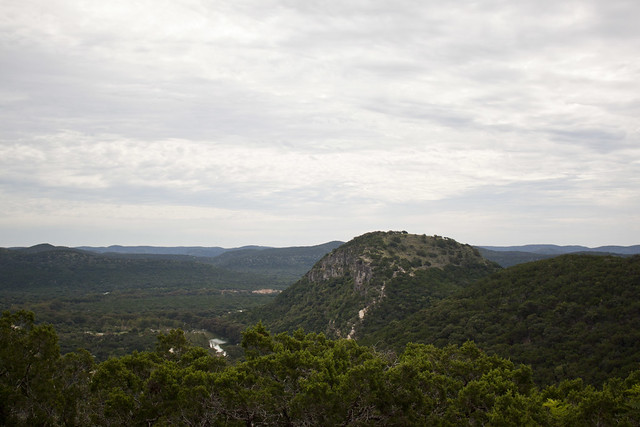 A look back at Old Baldy.

The hike was great but Chris was pretty beat after carrying a 26 lb toddler up that terrain. We don’t have that kind of elevation change over here in SE Texas which makes that kind of hiking a little tough.