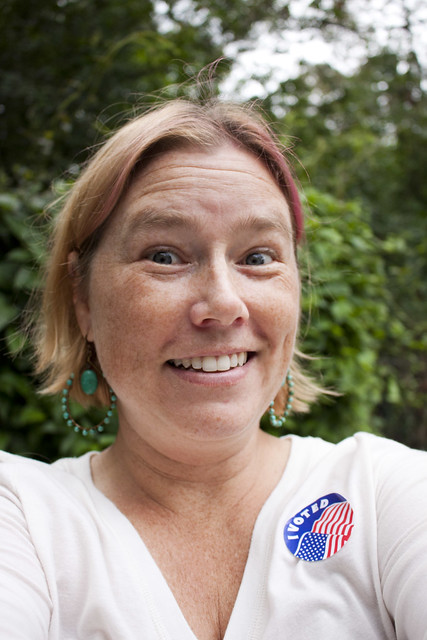 This was an unplanned post. This was me yesterday at lunch. I voted in the morning, wore a white shirt in solidarity because I don’t have a pantsuit that I can fit into, and happily cast my ballot for Hillary Clinton. Tears welled up in my eyes when I was getting dressed; it was going to be a monumental day!

As the evening wore on I tried to go to bed at 10:30, only Forest woke up and I had to go calm him back to sleep. As I sat on my phone more tears came to my eyes as it was evident it was going to be monumental in the worst possible way. I slept in fits last night. I hoped that the split electoral college outcome was going to be an option, or that we’d squeak by. But no.

This is a much scarier feeling than in 2000. If you haven’t been paying attention and think Voldemort was blithely running his mouth, think again. There are a lot of people who are very worried, nervous, and scared about someone who was endorsed by the KKK being president. If you think that other people around him will keep him in check, have you seen what some formerly respectable politicians have been saying on social media or real media? Moreover, look at some of his constituents. Words matter. And what happens when words turn into actions?…well.

I’m going to relish the last few months of the Obama Administration and be so very thankful for that man. And remind myself of what Michelle Obama said, “When they go low, we go high” and make it a mantra for the next four years.

*comments will be disabled. If you really need to say something, you can email me. Political posts aren’t my thing, so regular writings will return after I’ve had time to sit with this for awhile.*