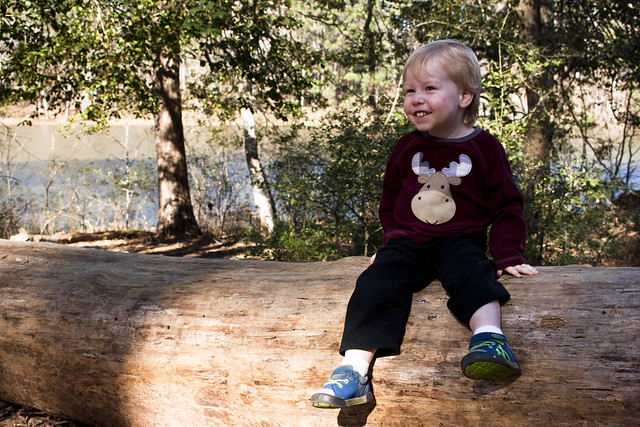 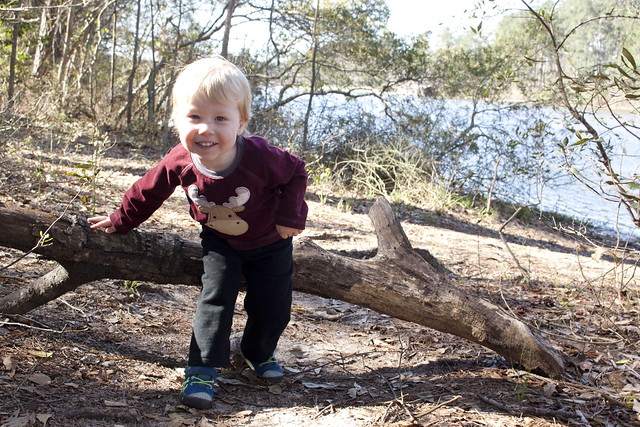 We finally managed to get out for a camping excursion after several months of dormancy in that department. Busy schedules and chilly weather left us without a camping trip on the schedule for December and January and while February warmed up nicely Chris ended up out of town for work for several weekends. We’re sticking closer to this side of Texas for our spring camping trips and we kicked the season off with a trip up to Huntsville State Park. While we’ve hiked here many times, Chris and I have only camped here here once, back in February of 2012. I like that this park is so convenient, only an hour drive from our house so it makes it easy for us to leave on a Saturday morning and come back later in the day on a Sunday and still get home in time to unload and prepare for the week. 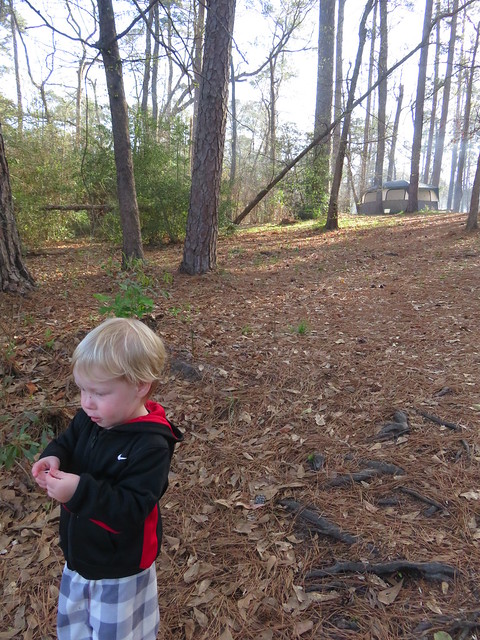 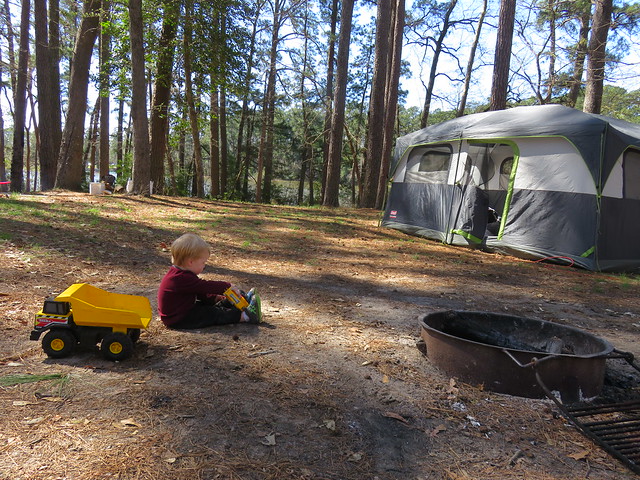 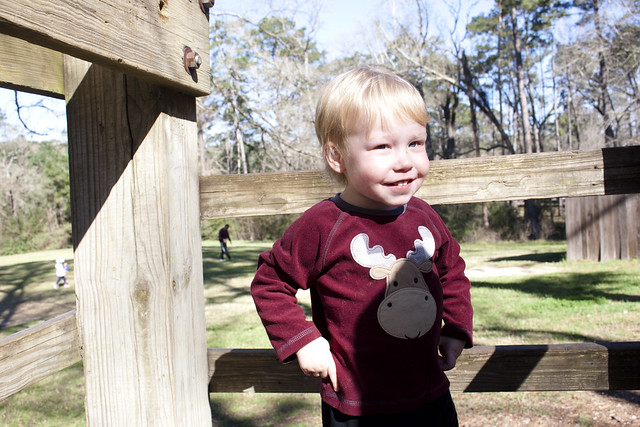 We lucked out with site 49 in the Raven Hill campground, which put us close to the bathrooms and playground but we had a buffer from that which meant we weren’t too close to the comings and goings of that area. In addition we had access down to the lake and the campsites right here were not stacked up on top of each other. I’d say that sites 49-53 on the lake side would be ones to get if you are coming to camp at the state park. The last time we camped the place was fairly deserted due to bad weather but this time the place was packed. There were umpteen Boy Scout groups to boot, but thankfully they were all kind of placed in a scout area, where all of the groups were in one general section of the campground. I have nothing against the scouts, my brother and dad are Eagle Scouts, but it gets a little cacophonous when camping next to a scout group. 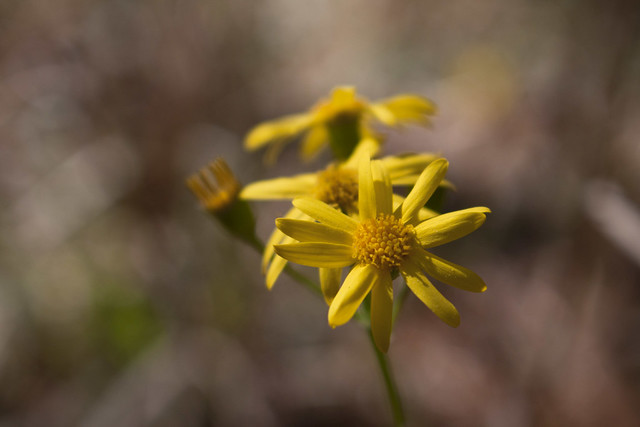 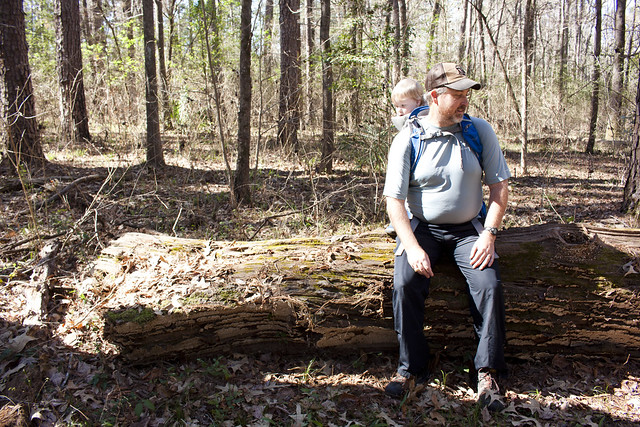 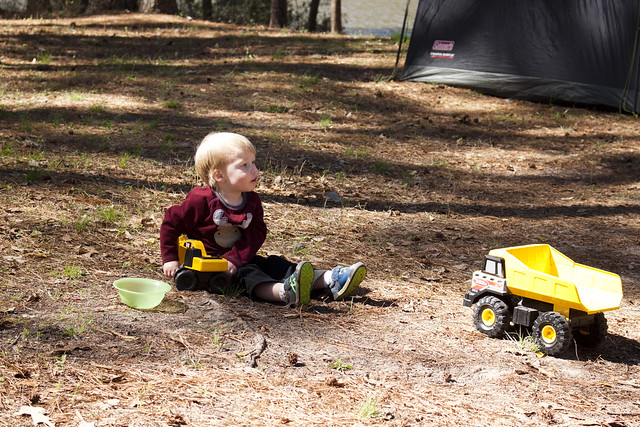 Forest is turning out to have a really good memory. The last time we were at the state park was back in October when we went for a hike. The education center was open and they have two baby/juvenile alligators in an aquarium there in addition to other small tanks, one with a coral snake and another with baby box turtles. After we set up camp we had planned to do a pre-lunch hike in which we would create a loop of a portion of the southern section of the Chinquapin Trail and the Coloneh Trail together and end up back in the trailhead parking lot near the visitors center. As we approached the visitors center Forest started pointing and exclaiming about alligators and it took both Chris and I a few seconds to realize he was remembering seeing them months ago! He would not let up about seeing alligators for about half of the hike and if you saw in the video he kept wanting us to turn around so we could go see the alligators. Of course we finally made it back and he got to see the alligators but not without some panic on his end! 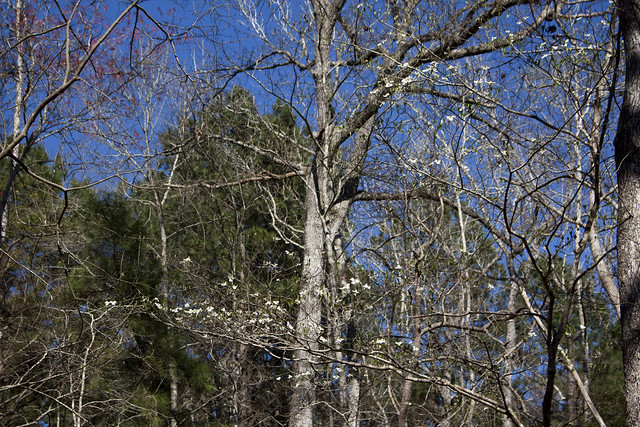 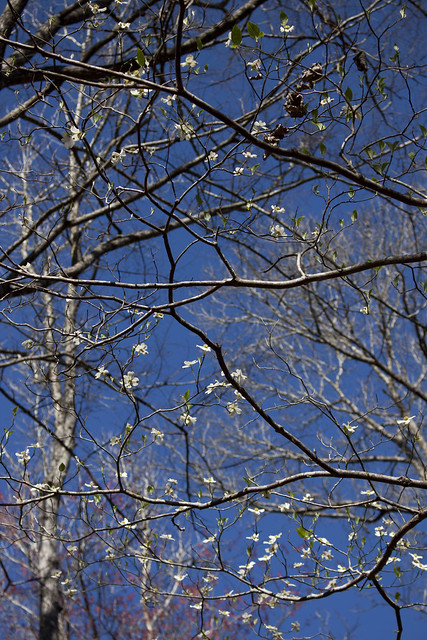 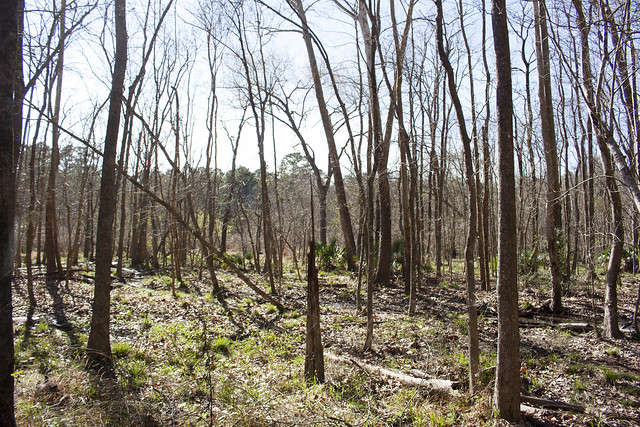 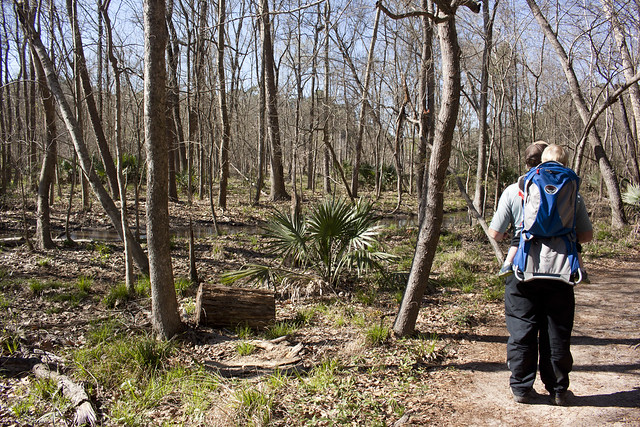 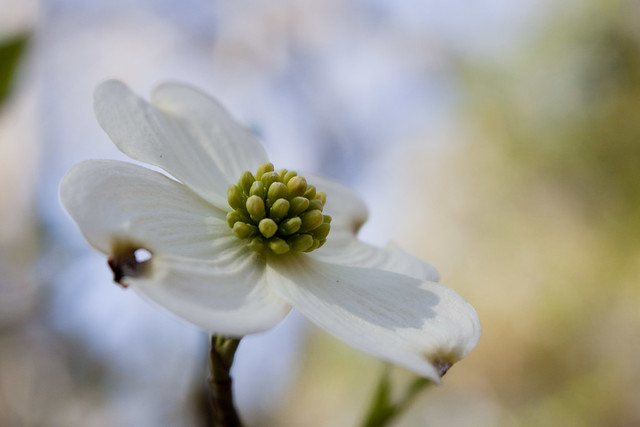 Compared to this time last year, camping with Forest is getting quite a bit easier. Following directions (with plenty of testing boundaries in the mix) and an interest in playing with toys and self directed play has allowed us to be able to sit or do camp chores instead of constantly minding a toddler. It was so, so pleasant when Forest would play with his trucks in the dirt and I could just relax in the chair while I took in the wonderful spring sunshine and blue skies. It was also a lot of fun just exploring around the campsite with Forest. He has an interest in spiders and ants and when we were trekking back from the bathroom we spotted a line of leaf cutter ants. I went from hyperfocused on the few ants and zoomed out a bit until I saw a clear path of ants heading in one direction which lead me to look over and see several mounds about ten feet to our right. It was fascinating because I had been reading that book On Trails last month (soon to pick it back up) and in that book the author covers ants and the unique way they know to follow trails. When I zoomed out in the scene I realized these ants had worn a path in the grass just like humans wear paths into their environment. It was really awesome to see and I didn’t have my camera to try to document this but I hadn’t really been acutely aware of this until that moment. 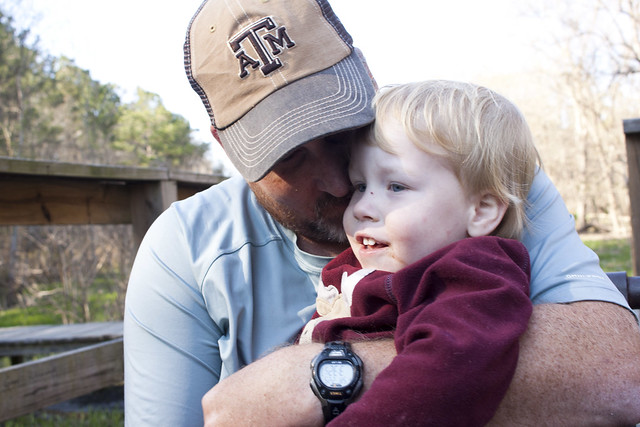 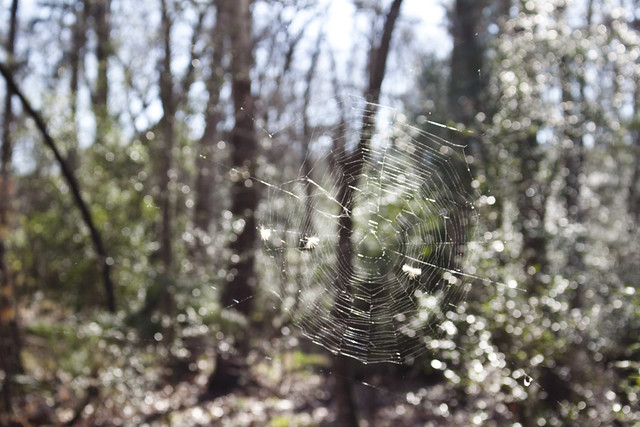 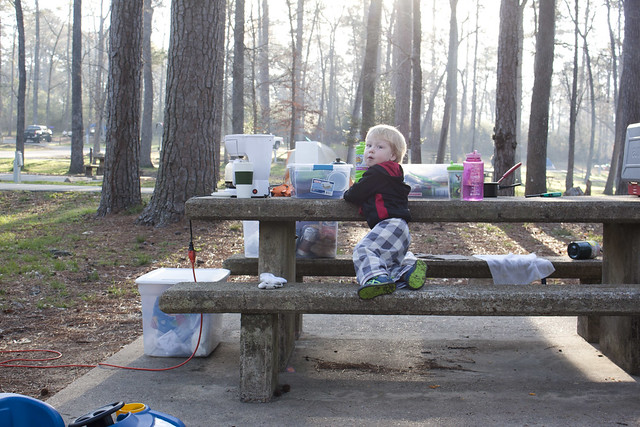 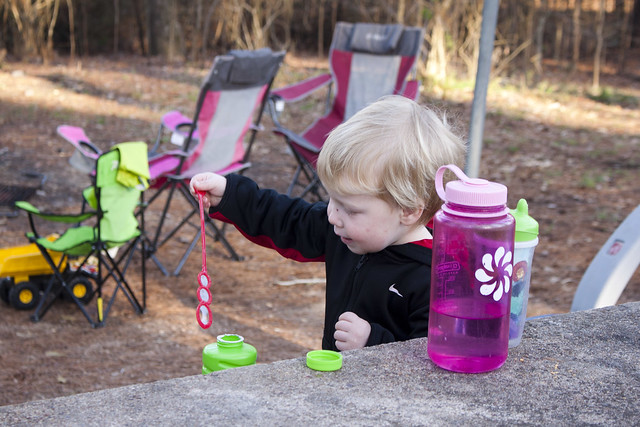 So, we watched leaf cutter ants, looked at leaves, picked flowers, talked about birds in the sky; it is a whole lot different camping with an older toddler! Another change has been that Forest has been starting to want to eat at the table with us and that translated over to camping. We’ve been letting him sit in a chair at times, with him kneeling on his knees to reach the table—we’ve got to find the booster component to our highchair!—and he wanted to do the same while camping. He only sat in the highchair once, at dinner, because there were too many bowls and plates to deal with being spilled for that meal. 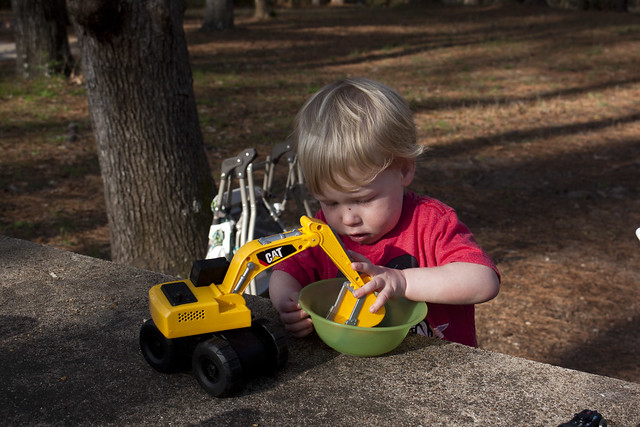 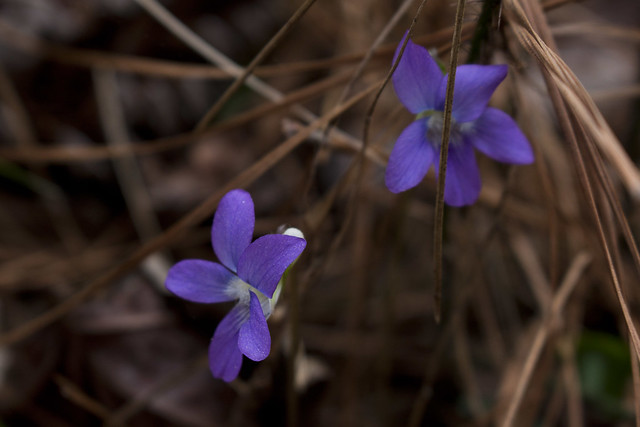 Hiking wise we had to piece together some trails because the far back trails were closed due to the work being done on the Lake Raven dam (see map here). Saturday afternoon we took the lower portion of the Prairie Branch loop out to the Chinquapin Trail and crossed over at the marsh on the north end of the lake to have a snack at the bench. It was a slow walk, to see what we could see and enjoy the afternoon. Sunday morning’s hike was via the Chinquapin trail starting at the nature center parking lot and continuing on about a mile beyond the marsh where we judged the contours of the map with where we were in real-time and then bushwhacked at the first instance where the trail dipped close to the Triple C trail, which follows the perimeter of the park boundary. We wanted to make some kind of loop but following the Chinquapin trail to the Triple C Cutoff and over to the Triple C trail would have made it too long of a day than we wanted so the bushwhack worked out well. It worked out well also in that the area we chose to cut through wasn’t thick with yaupon and instead was mostly navigable through grasses and other not-so-thick understory plants. The whole bushwhack couldn’t have been more than 500 feet but it was exhilarating to get off trail for once! 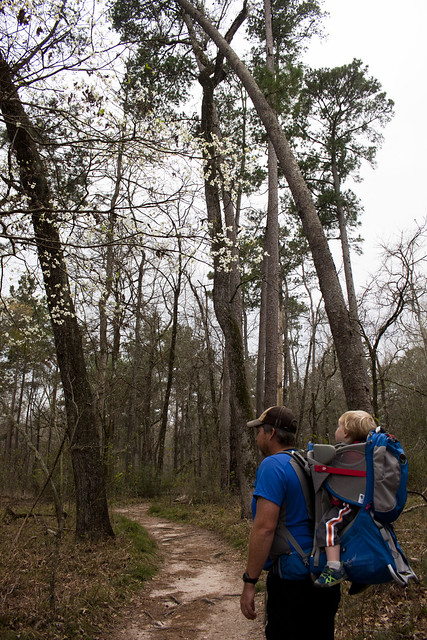 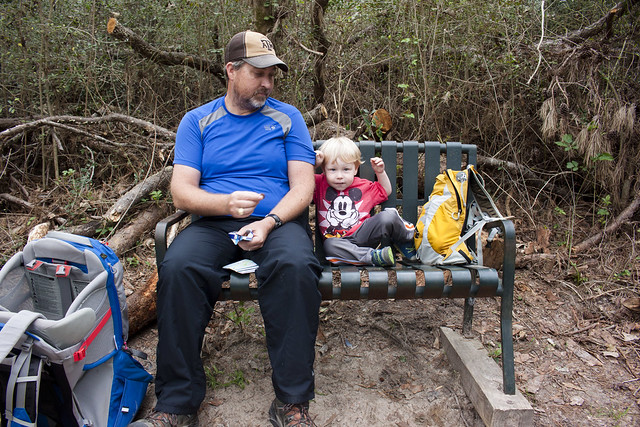 On our way across the marsh we had noticed the sky clouding up and thought we should have checked the radar on our way out, and of course on our way back on the Triple C trail we heard some suspicious rumblings in the distance. Luckily the rumblings did not evolve into any precipitation and we made it back to the campsite for lunch unscathed by bad weather. 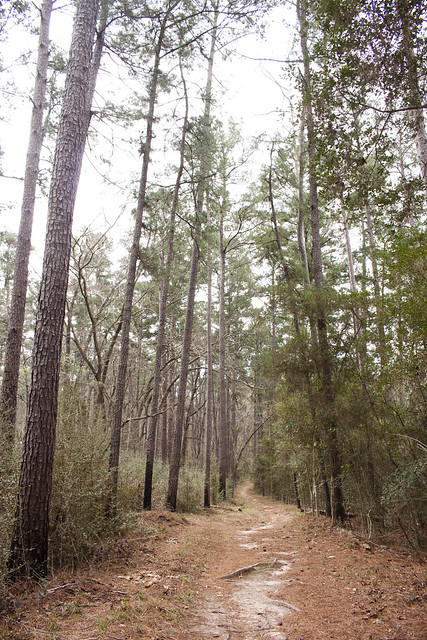 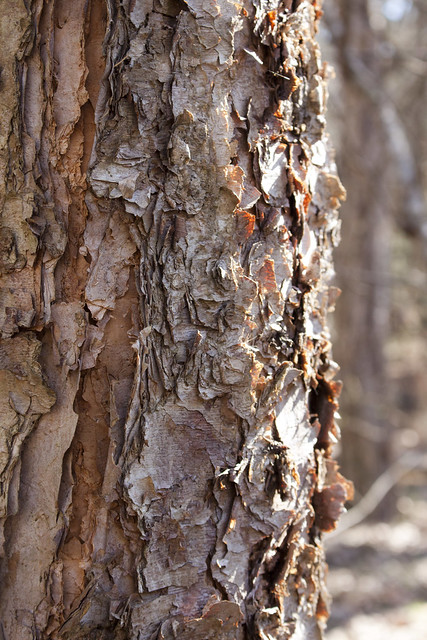 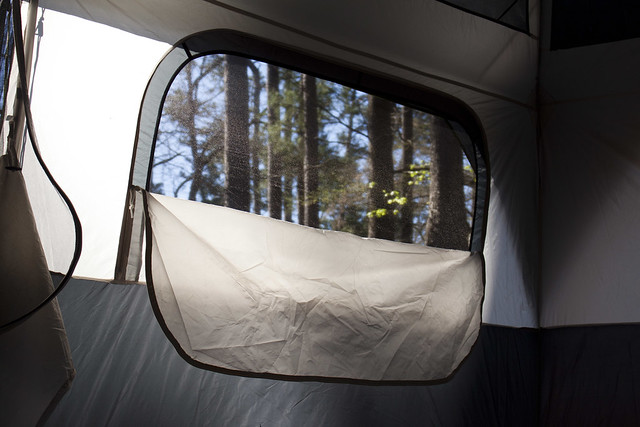 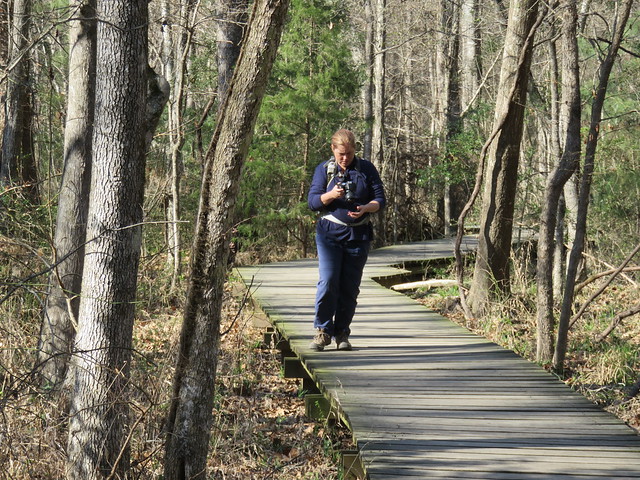 We usually don’t do lunch at camp on the day we head back home because we usually have a long drive ahead of us. Being only an hour away we took a leisurely lunch at camp, dismantled the campsite, and then Chris fished at one of the docks for about an hour before we headed home. I’m looking forward to having a few more of these scenarios in the coming months—the no rush to get out and get back home; we still got home with plenty of time to unload and get everything ready for the week.