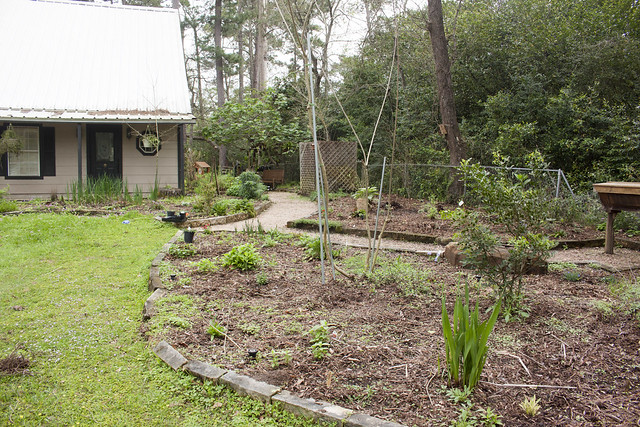 Today is a rainy, dreary day and we’re going to get a slight dip in temperatures to the 50s and 60s for a few days before we return to life in the 70s and probably 80s once again. I was hoping to get a few things done in the garden this weekend, pull some weeds, plant some seeds, and transplant some stuff, but that might be held off until later in the week. 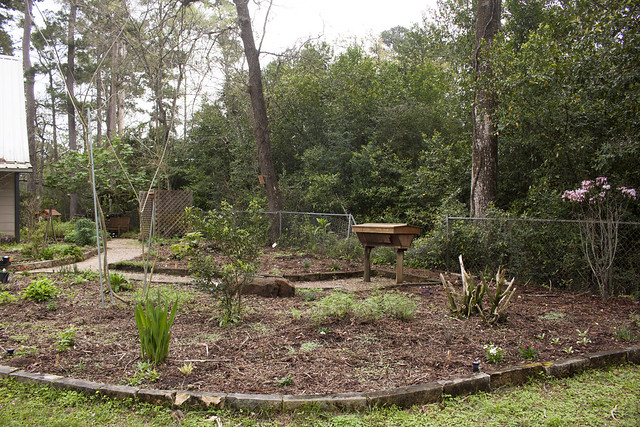 The garden is awakening well now, with a few plants taking a little longer than others. A couple of plants I am actually wondering if they are dead but we will give them another month before we do something about them. Sometimes plants are sleepier than others and they take awhile to come back. 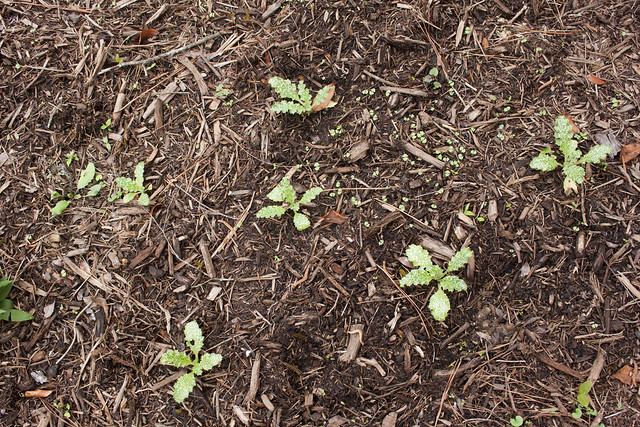 We’ve had a ton of milk thistle reseeding itself in the vegetable garden from the compost so I’ve been trying to transplant some of them into the flower garden. I’ve been reading and listening to a few podcasts/blogs that talk about using thistle in various manners and I may try to see what I can do with our thistle once they are grown. I’ve been thinking a lot about trying to use more of the plants and weeds in the yard for whatever edible and medicinal uses they are known to have. 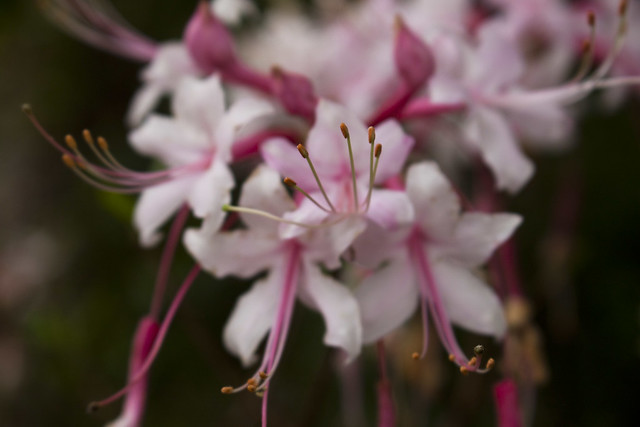 The Rhododendron canescens is blooming and has been for about a week. Now that I’m thinking about it, we have a few more behind Chris’ man-cave (the garage) and I don’t usually go over there but I bet those are blooming, too. 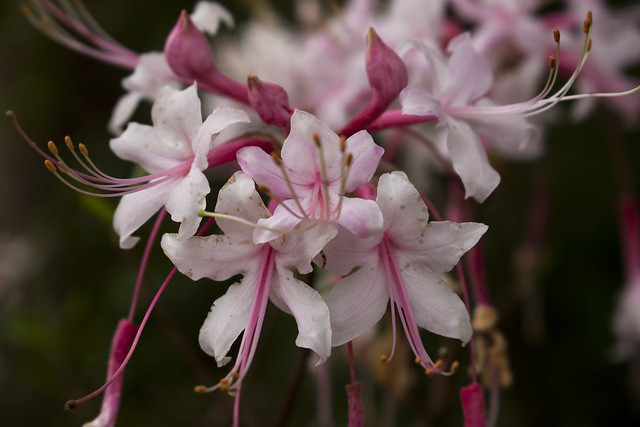 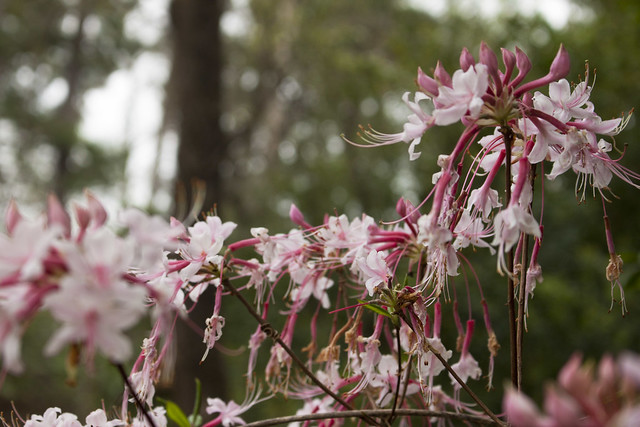 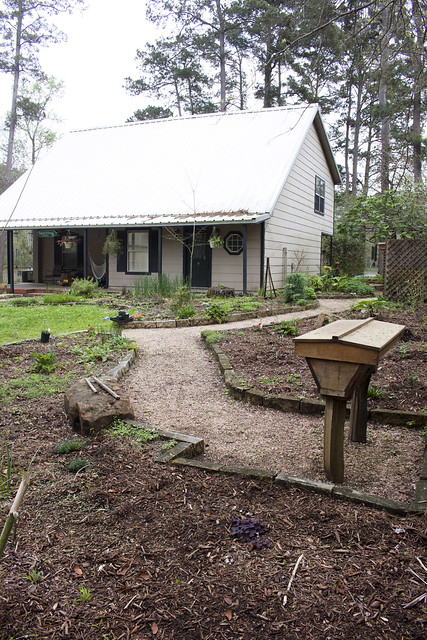 A couple of weeks ago we got a third load of mulch which I spread out on the final areas of the garden, some of which is seen here. I spread it on a Saturday and on Sunday I noticed a few plants looked grey and a little weird but I thought it was from the mulch dust and just shook off whatever mulch was left on the plants and didn’t think anything else of it. Chris and I planted a few things and I sowed some seeds in that bed and then on Monday we had a good rain. On that Wednesday after I went through the garden to see what was going on and I was horrified to see plants bleached out and looking like they were dead! A quick Google searched suggested that the mulch had not been cured properly and alcohols had built up in the mulch which basically burned the plants. I truly thought the plants were dead but by a week later I saw a couple of plants look like they were trying to pull through. If you see the purple plant and two little green plants at the bottom of the photo, those are two that I thought were toast but here they are severa weeks later, pulling through. I was a little dismayed at the mulch issue because we’ve bought from that company many times in the past and had no problems. Needless to say we will be more vigilant in the future! 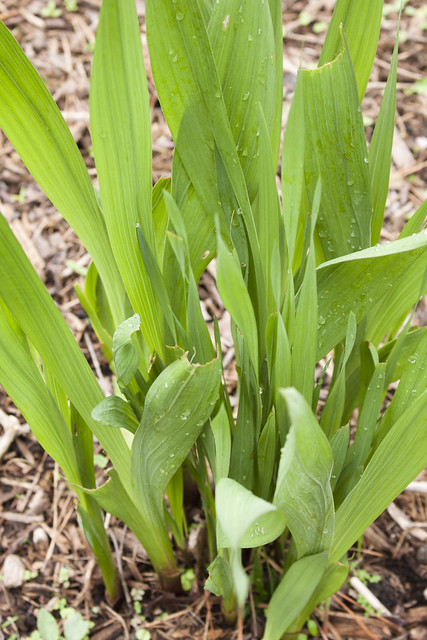 The Gladiolus dalenii are thriving after Chris started spraying some fish emulsion on the flower beds. It has been working as both a fertilizer but also a deer deterent. I had to replant one gladiolus bulb continually because the deer kept pulling one up when they were nibbling. 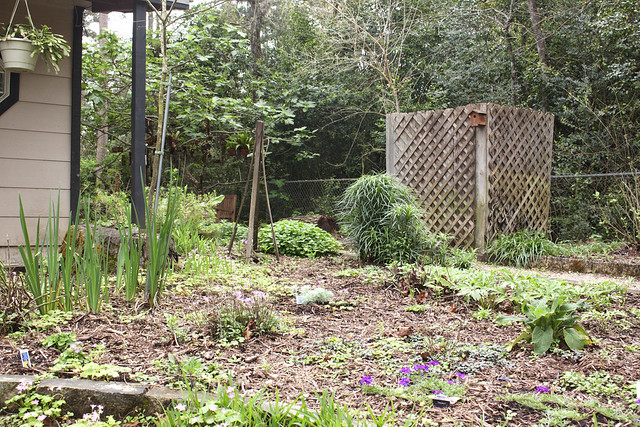 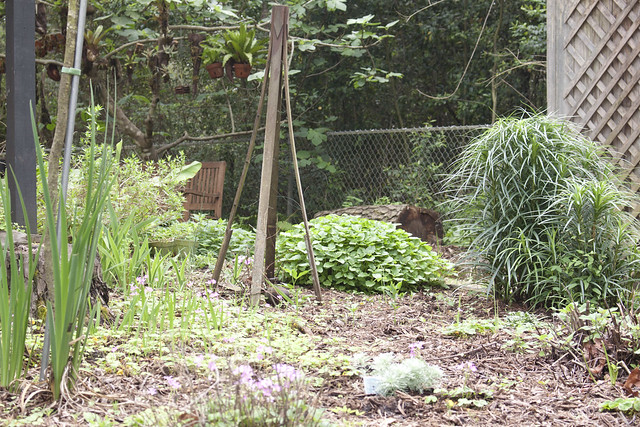 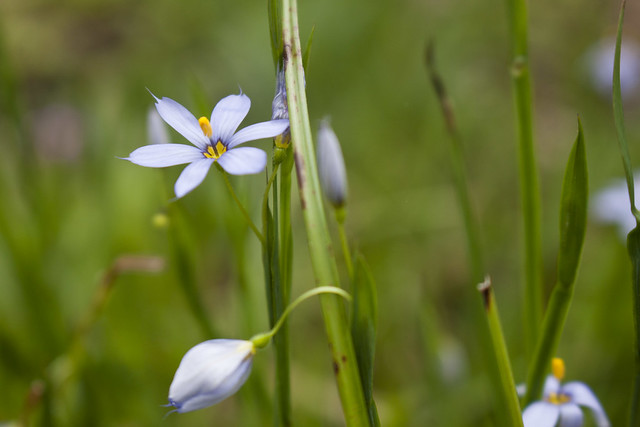 The patch of blue-eyed grass has expanded over the years and if we let it I think it would take up an entire section of the flower bed. Nevertheless, it is a gorgeous addition to the front flower bed. 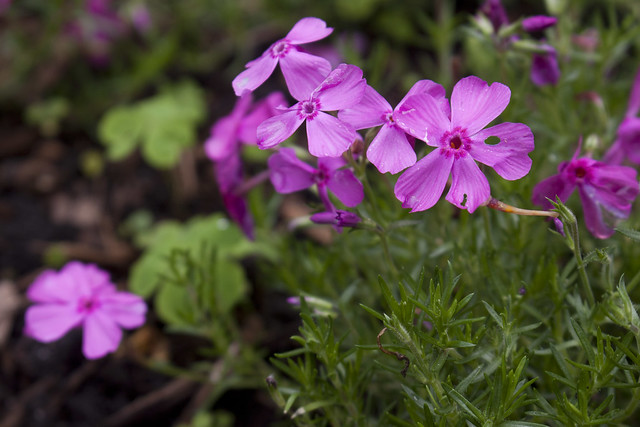 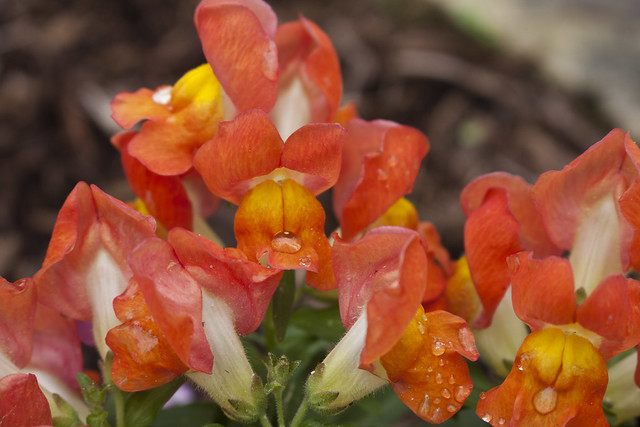 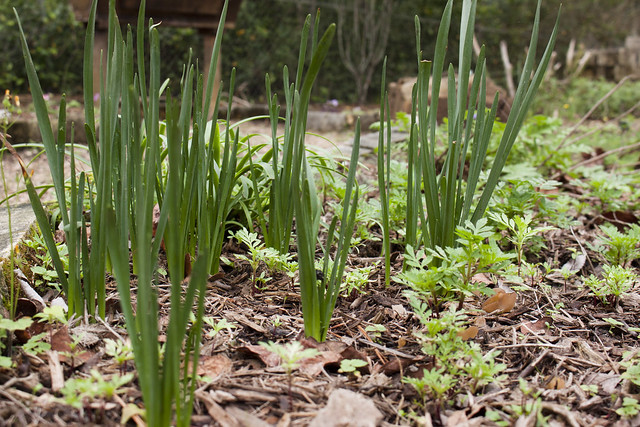 We had several nice marigolds that really made the corner of one of the beds look really awesome last year and they all self seeded and germinated back in January. Looks like we will have another great patch again this year. 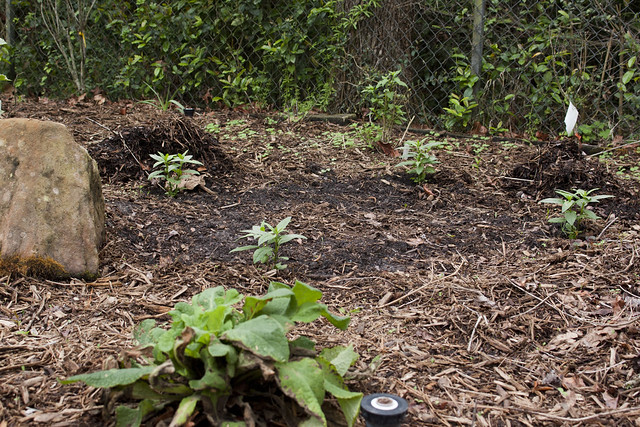 One of our goals this year is to provide plenty of milkweed for the monarchs. In addition to swamp, common, and ‘butterfly’ (tuberosa) milkweeds, Chris bought more tropical milkweed seeds so we can really get a thicket of it growing. Some of it reseeded from the plants we had, and even came back after the freezes, but we are looking to have more plants this year as I think we may end up raising many caterpillars in a caterpillar tent. We need to get more pots of it so we can have a rotating supply of it in the tents as the cats chomp them down. We’ll see. 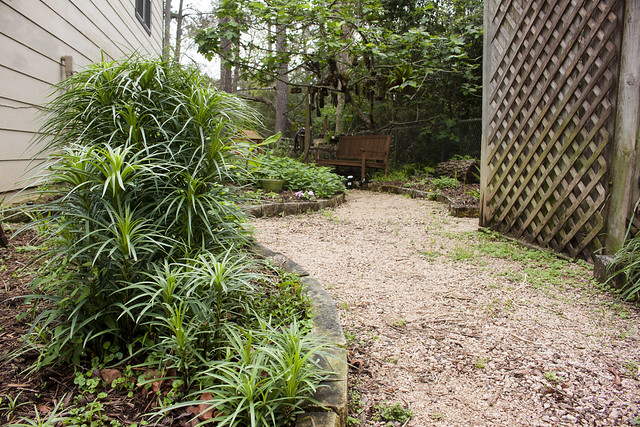 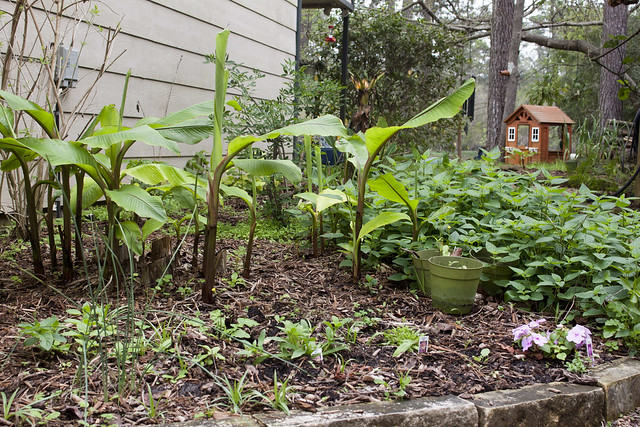 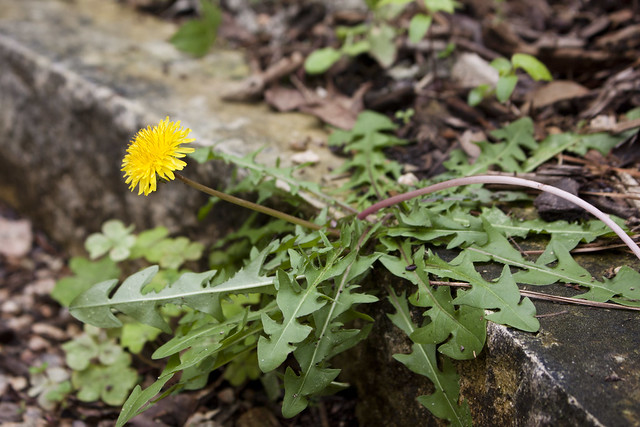 I left this dandelion because it was just too happy growing out of that nook! 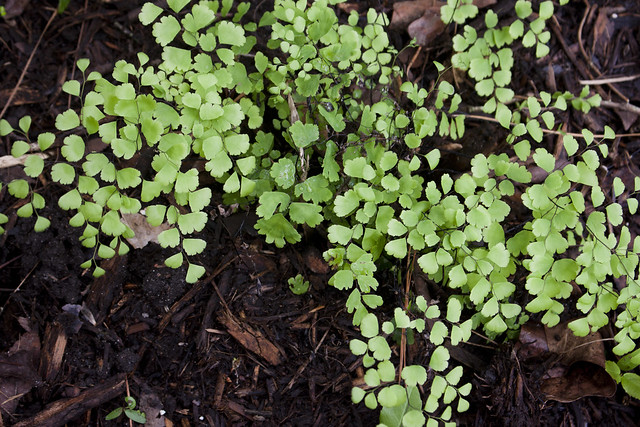 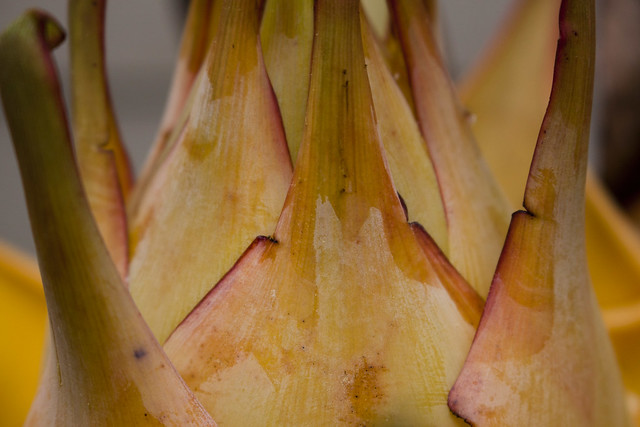 One happy surprise is seeing the golden lotus finally bloom! Progeny of a pup we gave Chris’ dad back when we lived in Florida, it’s like having an old friend back! 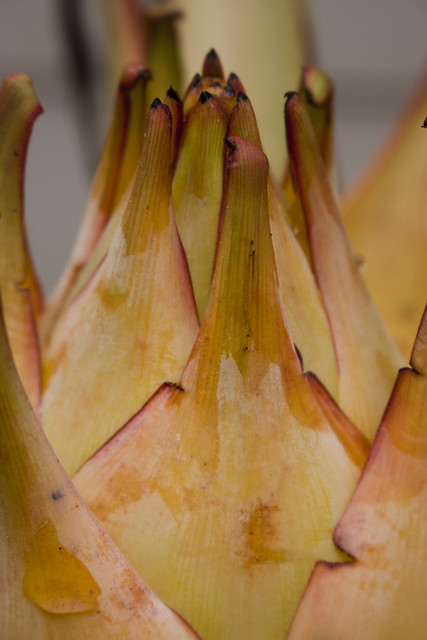 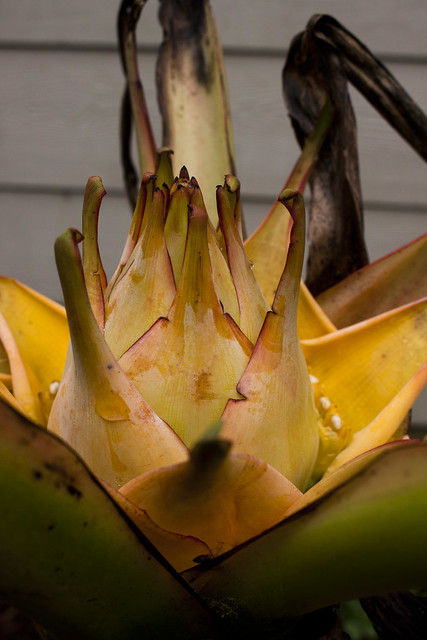 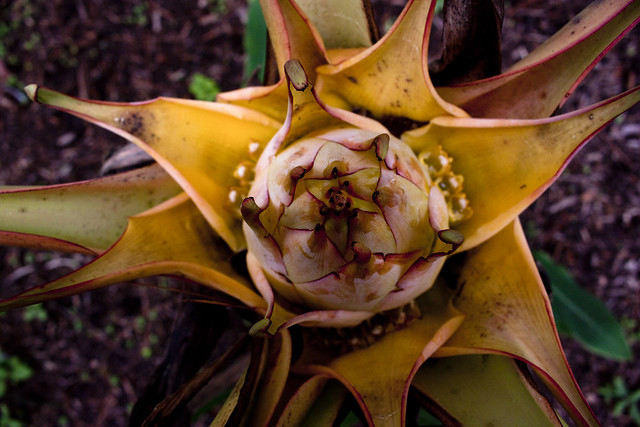 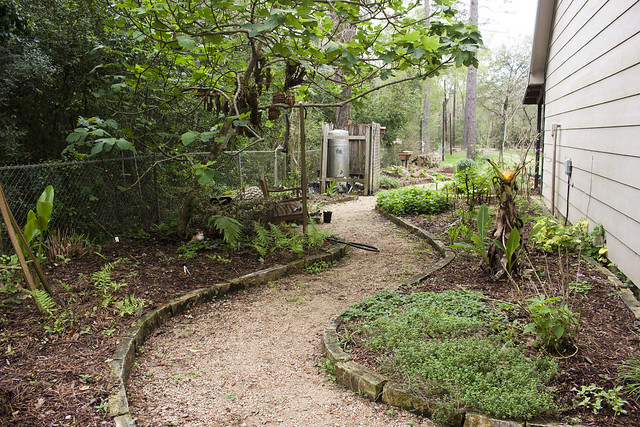 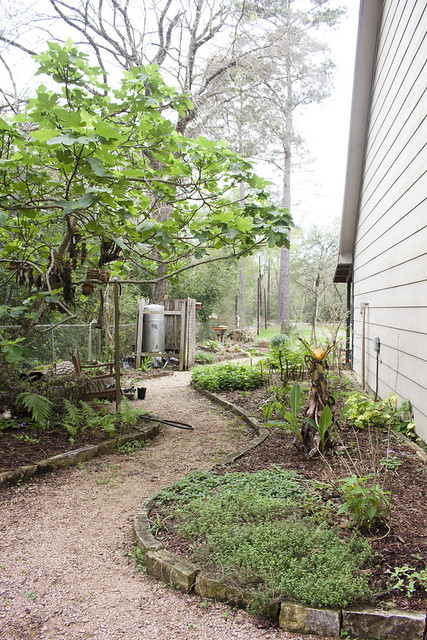 Things are looking good. It will be vastly different in a month!