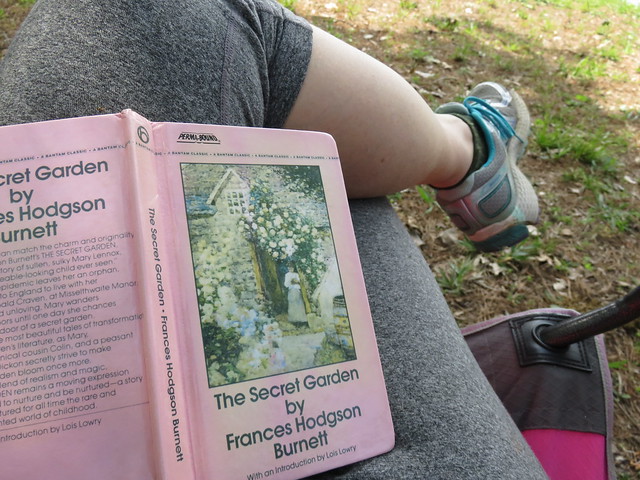 Hi, my name is Misti and I’m an audiobook convert.

I was completely and utterly burned out of politics this month and I opted to move away from podcasts a bit and intersperse my listening with audiobooks. I’m finding that I enjoy listening to mostly non-fiction or shorter fiction via audiobooks. I use a combination of Hoopla Digital and Overdrive for downloading audio and digital books. I have preferred Hoopla mostly because it is easier to search for books and usually something is available. The only problem is there is a daily lending limit set by the library so if I want to download something at noon one day I usually get a message to try back later. If I remember, I try about 6:30 that evening and all is well. Overdrive seems to have a broader selection of books but it is not nearly as easy to download books because there are usually only a certain amount of copies per digital or audiobook so I have to put a hold on it. No big deal, just that sometimes there’s a line of people in front of me, whereas with Hoopla, despite the daily limit, if there’s a popular book available I haven’t had a problem downloading it before the daily limit is reached. I don’t know, it’s a weird system.

I’ve been flagging so many books to follow up and read at some future date. Some I’m coming across that I know I want to own and will keep that in mind next time I see a used copy or one on sale somewhere.

With my audiobook uptake this month and spurning of podcasts, I’ve ‘read’ a lot more books this month. I’ll denote which were audio.

Completed
On Trails by Robert Moor: I originally started this book on paper and got about halfway through before I couldn’t renew it anymore and had to return it. I found the audio on Hoopla and was able to finish it easily within a week. This is probably my favorite book I’ve read so far this year. Moor writes a fascinating overview about the history of trails, from what may be the first trails left in fossilized rocks from primordial animals in Newfoundland to a history of the Appalchian Trail, including a scouting adventure to Morroco for part of the potential IAT. Interspersed are stories about Native American trails and hunting trails. In one section he covers herding sheep on a remote portion of the Navajo reservation and in another he scouts old Cherokee trails in North Carolina. I found the latter fascinating because he discussed how you can often see the original foot path in the woods with the adjacent wagon path after settlers arrived and then adjacent to that the eventual highway that was built because the original foot path had been that desirable of a trail. There’s so much packed into this book I really thought it could have gone even further. Highly recommend this one for outdoor and nature enthusiasts.

The Patron Saint of Liars by Ann Patchett: This is a story of a married and pregnant woman who leaves her husband in the 1960s and ends up at a house for unwed pregnant girls in Kentucky. She gives birth and stays on, remarrying and raising her child there. It is told from three points of view. At first I found this frustrating because I had just gotten into the story with the main character narrating when it switched over but then I grew to like the point of view of each of the storytellers. It ended more abruptly than I wanted and didn’t quite resolve everything but overall this is good introduction to Patchett’s work. I really want to read State of Wonder next!

Epic Tomatoes by Craig LeHoullier: LeHoullier has made the rounds on various gardening podcasts and is always an interesting person to listen to. The book cover has intrigued me for years and I’ve wanted to purchase the book but never broke down to buy it. This was an informative read but I was mostly interested in the discussion about heirloom tomatoes and the history of some of the seeds, including the resurrection of 70+ year old seed. Most of the detailed information about seed starting and tips and tricks was less interesting because I was already familiar with it. This book is one for any gardener to check out. So many tomatoes, not enough garden space. Or driveway space in LeHoullier’s case!

Cold Tangerines by Shauna Niequist: If you read certain lifestyle and inspirational blogs long enough you’ll see someone mention Shauna Niequist. She’s got several books out and this was her first one. I typically like to start the beginning with an author but from what I understand her books stand on their own. This memoir was heavily faith based—or was supposed to be—but as an areligious person it didn’t really bother me that this was the intended goal. Honestly, the book would have been better and more inspirational if it had been more secular because the references to God felt tacked on, as if her publisher reminded her that she needed to include a certain amount of references to religion in approximation of how many essays she had in the story. That said, I found myself loving some of her essays, particularly the ones about life changes. This particular book was a take it or leave it one for me, I will give her writing another chance and check out her later books at another point. Another audiobook.

The Daring Ladies of Lowell by Kate Alcott: This was an audiobook. I was looking for an easy fiction listen to break up the non-fiction and this seemed up my alley in the vein of historical YA. Historical, yes, YA….ehhh, not really. I’m not sure how I would have liked this book if I’d read it on paper but as an audiobook it wasn’t that spectacular of a story. Actually, I probably wouldn’t have like the paper version either because the plot was trite and pithy. It takes place in the 1830sish in New England when cotton factories were just starting to gain steam. If you’ve read or watched Elizabeth Gaskell’s North and South you’ll get an idea of where I going in a way—but in less well written storyline. The protaganist is a factory worker who left her family’s farm to escape farm life (which many of the other factory workers were doing) and there’s a story about murder and unwed pregnant factory girl, a weird side story of a tent evangelist, and of course a romance between the protaganist and the son of the factory owner—a romance that is incredibly forced.

So, I liked the zone out and imbibe in something frilly aspect but this isn’t that engaging of a book.

Bird Watcher’s Digest Butterflies Backyard Guide: Identify, Watch, Attract, Nurture, Save by Erin Gettler: I had Erin on the podcast to talk about her book a few weeks ago and I was bummed I didn’t think to check to see if the library had her book earlier than I did. I saw Hoopla had it available for download a few days before I chatted with Erin but I was already out of credits for the month so I had to wait until it reset March 1st. This is a great guidebook for common backyard butterflies throughout the United States. I’m going to have to buy a copy to have on hand at the house—Erin said Home Depot is supposed to be carrying it so I will have to look next time Chris or I go by there.

Finding Everett Ruess by David Roberts: I have a love/hate relationship with this book. I loved the writer and the idea of this story but I really did not like Ruess himself. This was because the story focused on his years from 16-20 when he was exploring the southwest and he was a bit of an entitled, bratty teenager, not quite coming into his own. This book has been on my to-read book for years and I listened as an audiobook. If you aren’t familiar with Ruess’ story, in the early 1930s he was exploring the desert southwest, roaming with pack mules and horses as he tried to make his way by selling his art. Almost like a Muir or some other similar transcendental type of nature enthusiast, but not quite. He lived with other people doing work or exploring the southwest as well as various tribal groups on occasion. He was actually very negative about his interactions with tribal people which was frustrating, too. There’s quite a bit known about his wanderings because he was an avid journal and letter writer and his family has quite a bit of his information, except the final journal and some other information that they lent out to unscrupulous characters in the 50s and 60s. The first and last quarters were really the best parts of the book in my opinion, and because the story of his disappearance has not be solved it makes you want to become a Ruess fan just to solve the puzzle.

Along the Appalachian Trail: West Virginia, Maryland, and Pennsylvania by Leonard M. Adkins: This actually needed to go on last month’s book list but for some reason I forgot about it. The book was mostly a lot of photos but I am always intrigued by early photos from the AT!

In the Middle Of

Appalachian Odyssey by Steve Sherman: I’m about 3/4 of the way through this book, a memoir from the 1970s. I have a lot to say about it and will save it for April’s book report. Pretty good so far, could have been developed a bit more.

Lincoln in the Bardo by George Saunders: This year’s most hyped book, after I saw people raving about the audiobook because of its cast of readers I put myself on the lending list on Overdrive (Hoopla didn’t have it) and it was automatically downloaded this weekend. I just started yesterday and so far I’m ambivalent. If I was reading this on paper I would probably abandon it. I’ll keep you posted next month!

This is the Story of a Happy Marriage by Ann Patchett: This non-fiction compendium of her essays is fantastic! I think she’s Elizabeth Gilbert’s long lost soul sister. Listening as an audiobook, read by the author.

The Secret Garden by Frances Hodgson Burnett: I haven’t read much into this still, about a quarter of the way through. Probably going to have to audiobook it to finish.

On Hold
Difficult Women by Roxane Gay: This is on hold because it is a series of short stories and not one continuous novel so it doesn’t make it easy to just sit down and read straight through. I’ll probably borrow it off and on throughout the year until I can finish it.