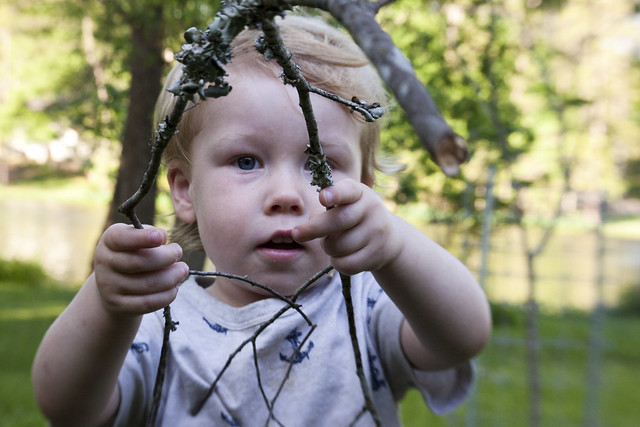 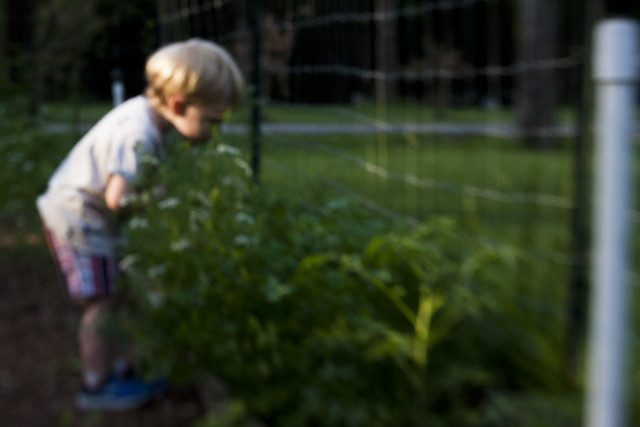 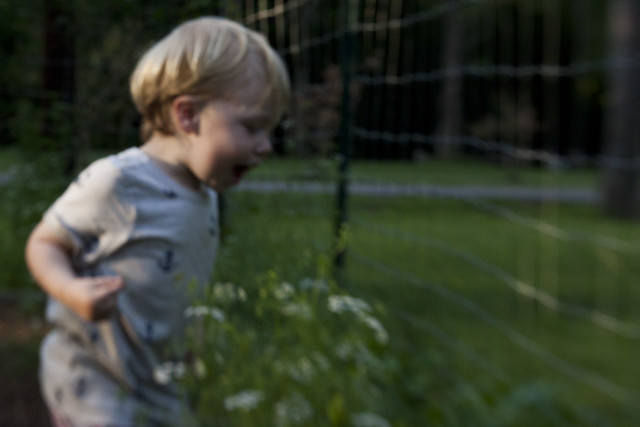 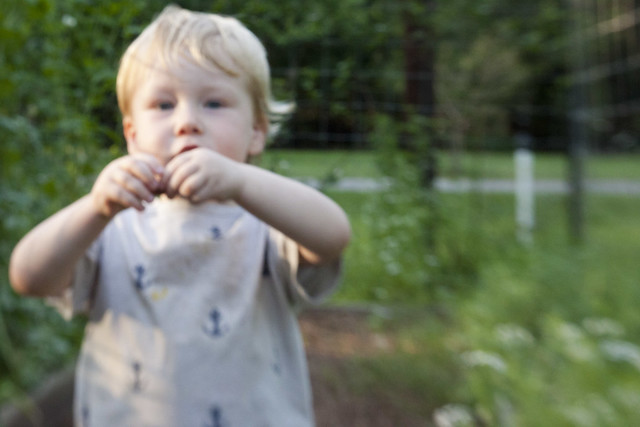 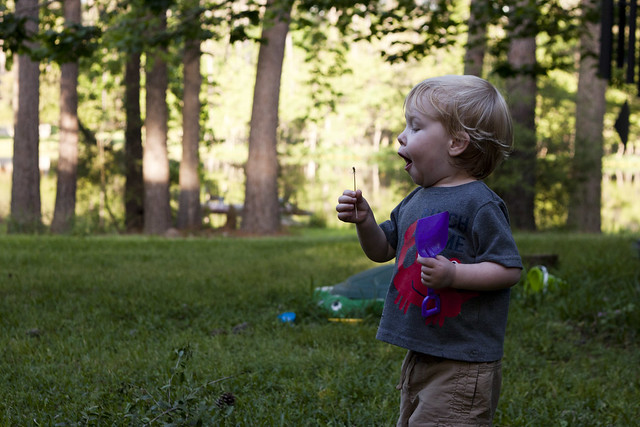 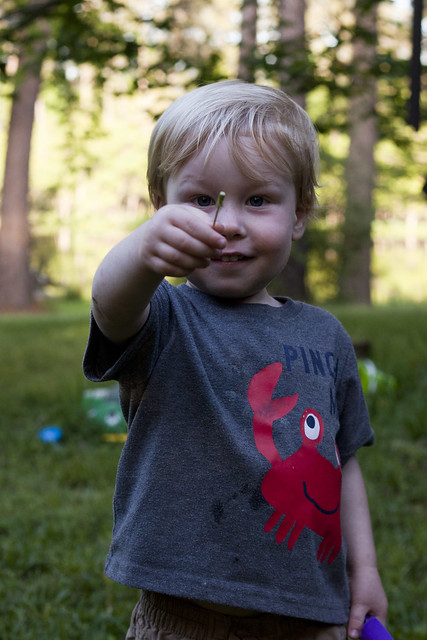 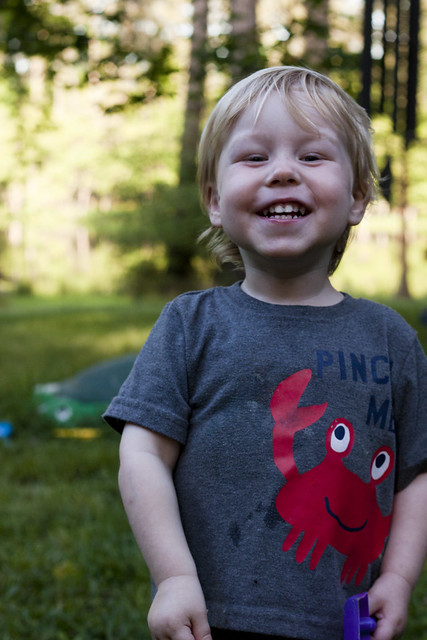 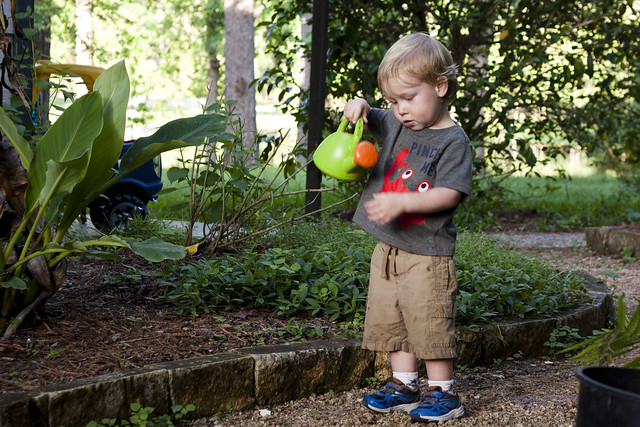 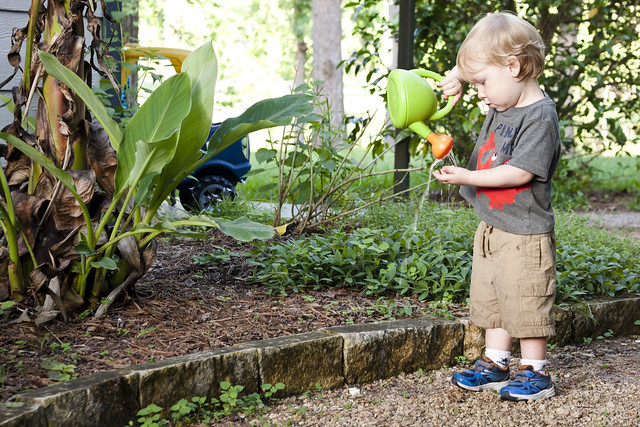 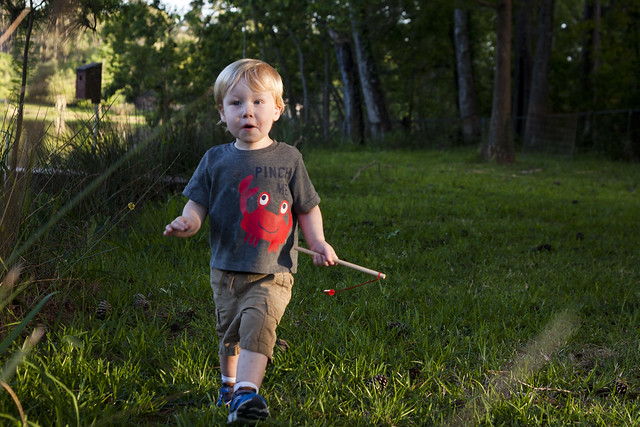 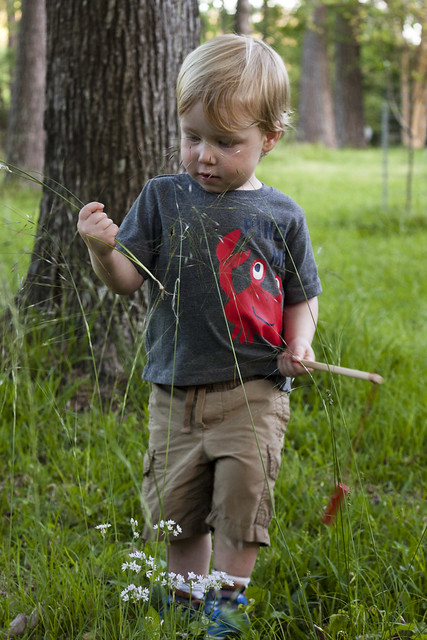 Six weeks have almost gone by since I took most of these photos. I’m so far behind but spending evenings outside is a good reason to be behind, right?

After dinner we hoof it outside, where we wander the yard or head to the vegetable or flower garden to inspect what’s going on. These days it is almost a necessity to drop by the vegetable garden because there is undoubtably something to be picked, even if it is a handful of cherry tomatoes. Sometimes we head out to a spot in the yard that I know something interesting is going on, such as when we had the orange dog caterpillars on the citrus, or if if there are monarchs on the milkweed. Some days we just putter, other days are more productive work in the garden. Lately Chris and Forest have been able to fish together; Forest has been able to sit still and follow directions on the dock and they will sit out there for a bit and fish, with Forest even reeling in some fishes.

It’s overcast tonight and drizzled earlier but I’m not expecting much in the way of rain, though I wish it would because we need it. The overcastness at least makes me feel less guilty about staying indoors sometimes, which is one reason I wish it would rain at least once a week around here! When it is bright and sunny it is easy to feel like you should be heading outside to enjoy the sunshine.

Despite all of that, it really is good that we are spending so much time outside and Forest is really getting to know plants and some animals. The other night we spotted a gray treefrog hanging out on a blackberry cane. Gray treefrogs are around but not nearly as common as their frog cousins the green treefrogs. Of course Forest looked for it the following night and I had to explain to him that I didn’t know where the frog went to. One day we watched a pileated woodpecker working on one of the dead pine trees in our neighbor’s yard and that kept him entertained for a little while.

Soon we will be turning the sprinkler on and filling up the little paddling pool (I can’t write those last few words without chuckling over a certain scene from Bridget Jones’ Diary!) for Forest to play in when the temperatures start soaring. Those days aren’t far away—I’m pretty much to the point where I’m going to have to shower when I do any lunch time gardening!

What do evenings look like for you right now?