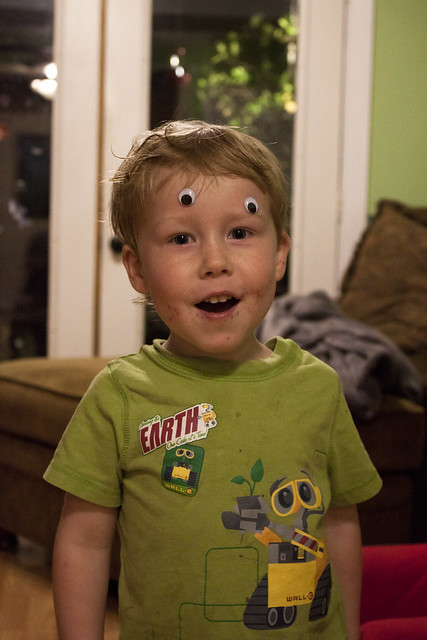 For Christmas this year Forest received a Koala Crate box subscription from Chris’ mom and so every month we’ve received a really fun box of crafty things that we make (read: I make) together. Forest loves getting mail so he definitely looks forward to this craft box! What I love about this box is that it isn’t junky for the most part, though there have been a couple of crafts that don’t quite get played with while others are used over and over again.

A few day ago we received May’s box and in it were crafts to make a felt butterfly (and turn it inside out to make it a caterpillar!) as well as components to make a rain tube that also turns into a tree. Well, with the butterfly there were googly eyes and we had an extra pair that didn’t get used and before I knew it Forest had taken them off and put them on his forehead and said “I’m a lady bug!” I about fell over laughing and had to get the camera because he was so cute and and it was hilarious! So, today’s Forest Friday is his lady bug antics complete with whatever he’d been eating for pre-bedtime snack all over his face!