Nearly mid-May and I’m finally here to write-up what happened around the garden and yard in April. Oh boy. I think it’s time to return to taking photos in small batches and processing them accordingly. There was a time when I was really good at that but these days I take photos and the camera languishes on my desk until I find time to process photos and then I end up with a back log of things to write about. Right now I’m only finding time to process photos on weekends or during Forest’s bath time and other than that I’m mostly finding time to do and be rather than sit and create.

Such is life right now. 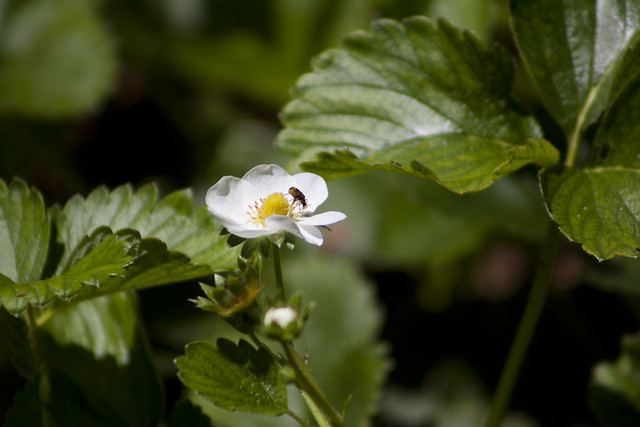 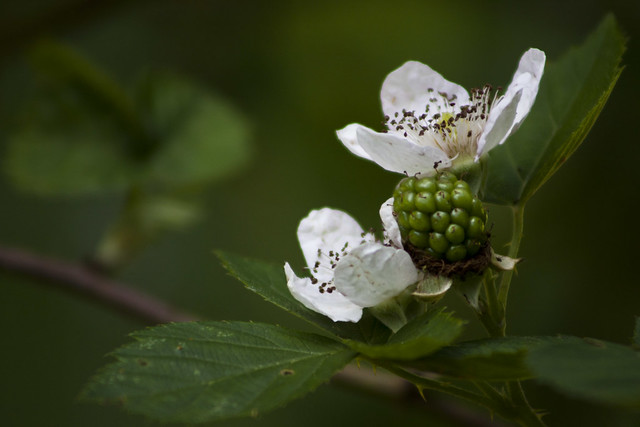 April was full of blackberry blossoms that have now turned into blackberry fruits. There is one or two that may be ripe as of the next couple of days but we are still several weeks out from a real harvest. Unfortunately I think we may have to have a neighbor pick blackberries or leave them for the birds (a dangerous idea—they might get used to it) as we will be on vacation when they are at their peak. I guess it is a good thing I made so much blackberry jam last year! 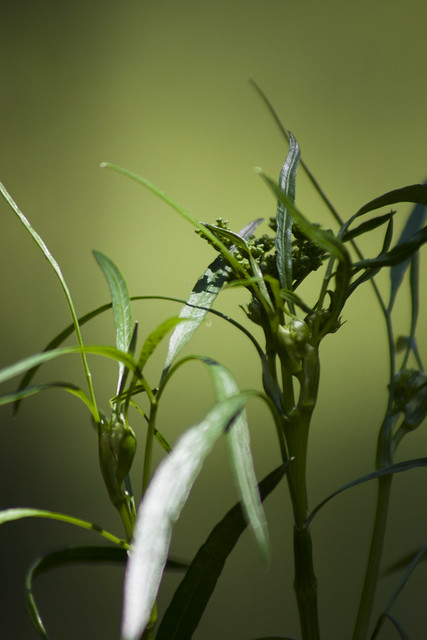 Last year the parsley managed to look great all the way until Harvey flooded the garden and then it rotted to pieces. This year the parsley has decided to bolt, which I’m not happy about because I liked the idea of having parsley all summer. I need to dry some of the leaves now and I plan on saving the seeds for kitchen use and re-sowing next season. 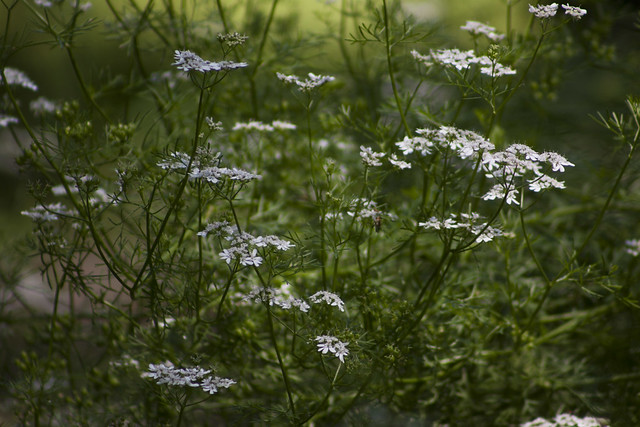 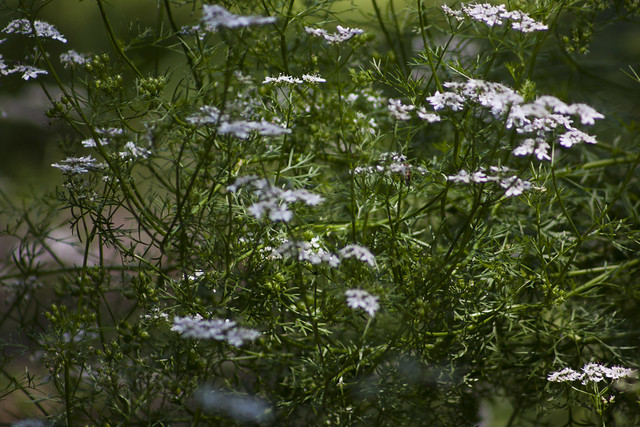 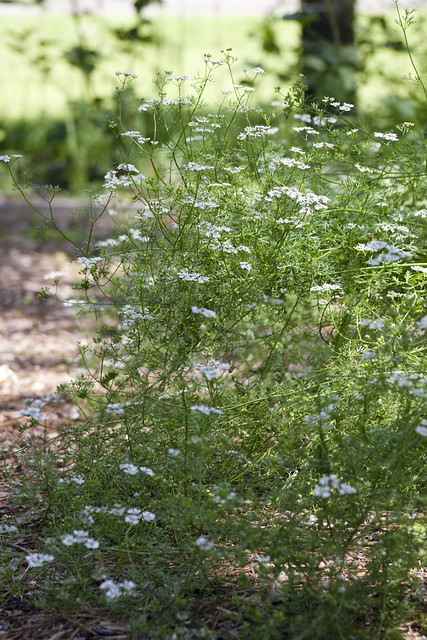 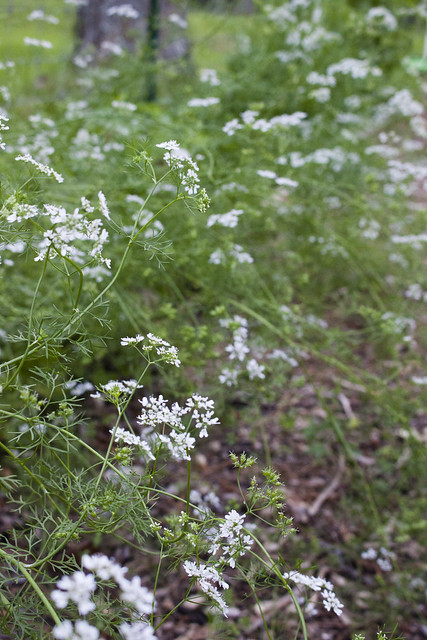 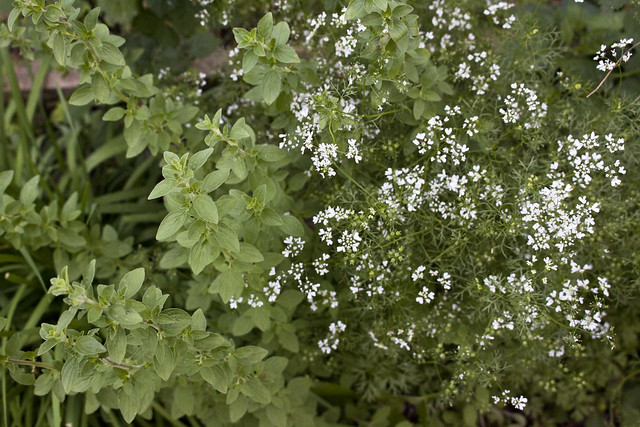 For a few weeks the cilantro was a glorious bouquet of blooms cascading into the paths in the garden. While there are still some blooms on a few plants most of it has gone to seed that I need to collect. 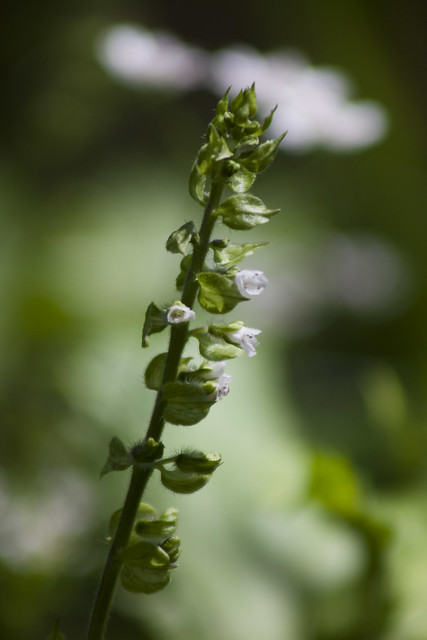 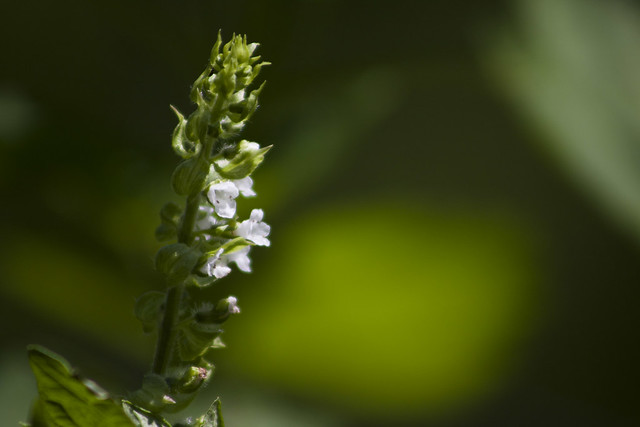 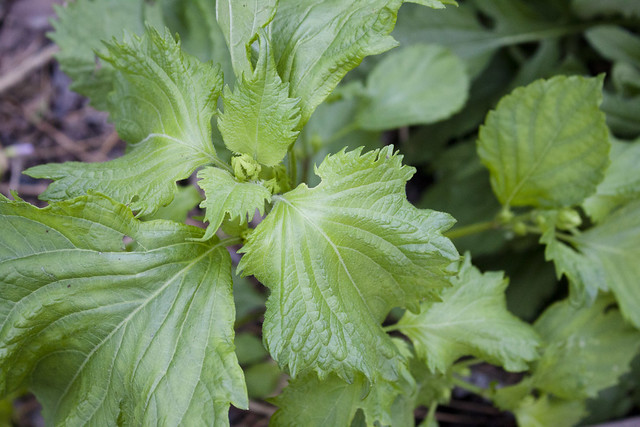 Shiso perilla blooms. Shiso is a new-to-me herb this year that I’m excited to add to our kitchen ingredients. It has grown profusely and is already blooming! 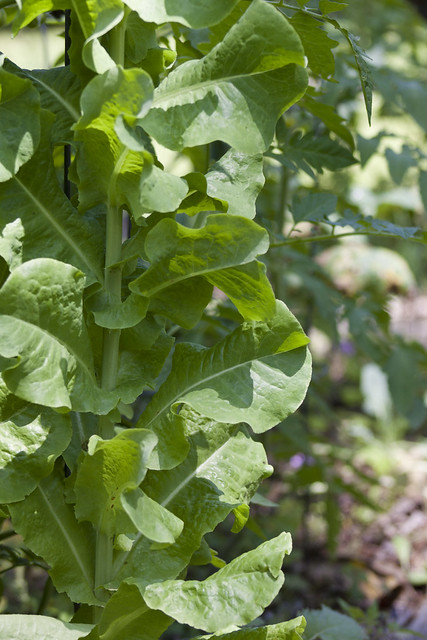 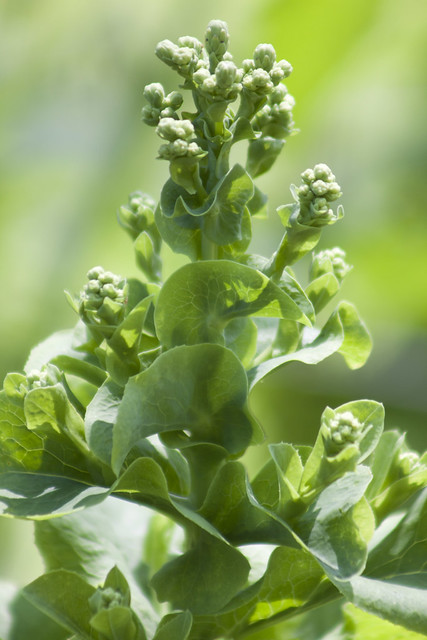 The lettuce managed to stay around a bit longer this year due to the cooler weather but as soon as it even dared to dip back into the 80s they were done. I pulled most of them out a few days ago and am leaving some for seed for next season. We grew an ample amount this year, more than was eaten. I think Chris may have eaten one or two salads and used a few leaves on some tacos but I was the primary salad eater this year. 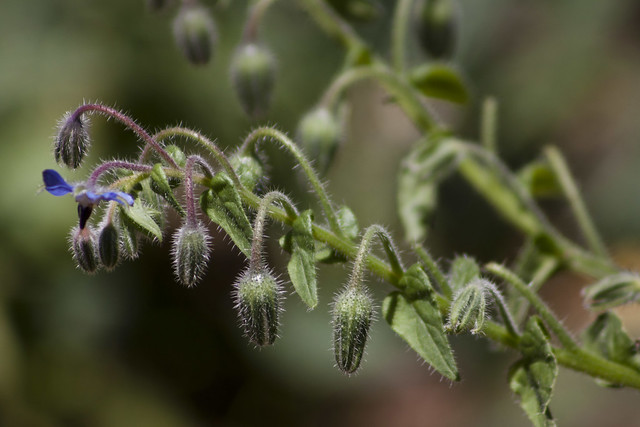 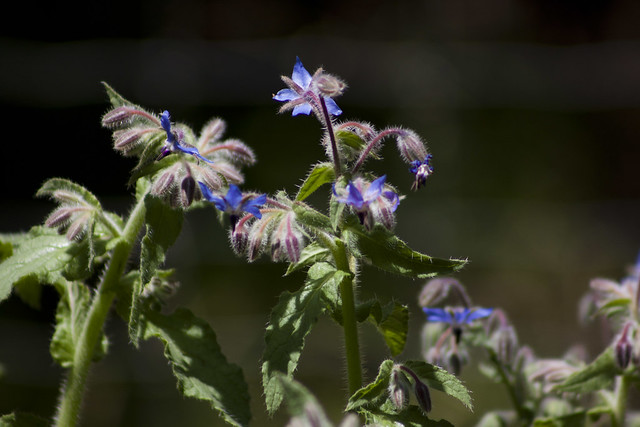 The borage is a magnificent bloomer right now, attracting bees and other insects galore. I was sad when about six weeks ago I found the snails had decided to eat through the base of a borage I planted in the fall—it was a decent size by the time January rolled around and then it was touch and go if it was going to survive the 16* days we had. It did and bloomed and then—snails. But other borage that Chris planted in another bed have been doing great! 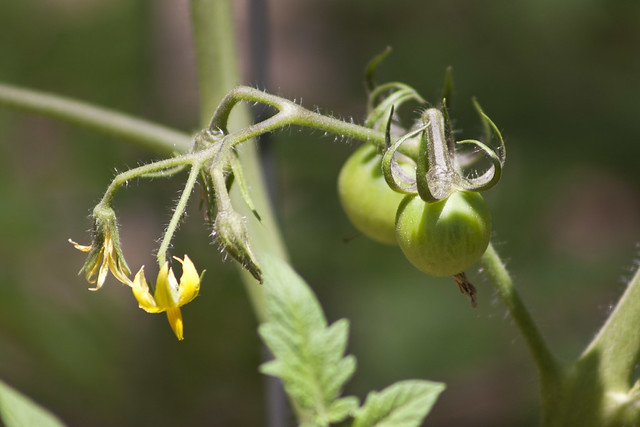 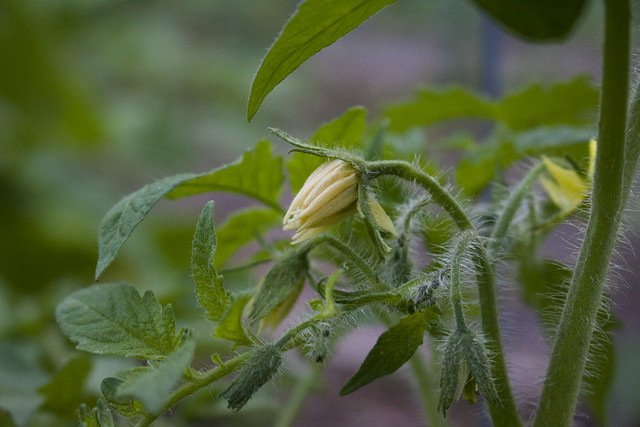 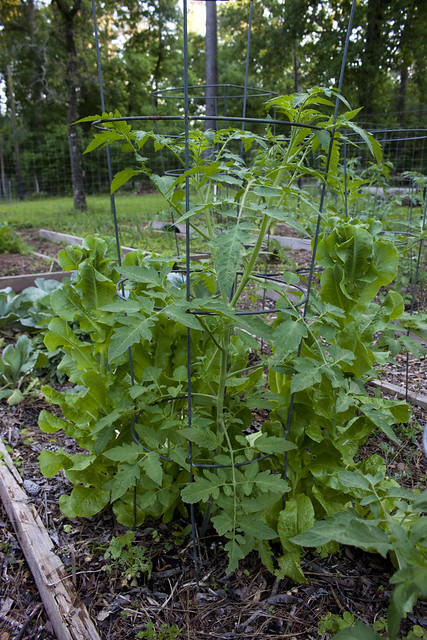 As for the tomatoes, they lept at the sign it was going to warm up! They are all topping their cages and reaching for the ether as we speak. The Matt’s Wild cherry tomatoes are beginning to ripen with other varieties not far behind. This is another crop that is going to peak while we are on vacation and I’m probably more upset about not being here for the tomatoes than I am about the blackberries. *sigh* I’m hoping that I’ll manage to get a lot of fruit ripening right before we leave and maybe another round of fruit setting while we are gone and when we return there will be more fruit? Can we cross our fingers for a cooler June so more fruit will set?? 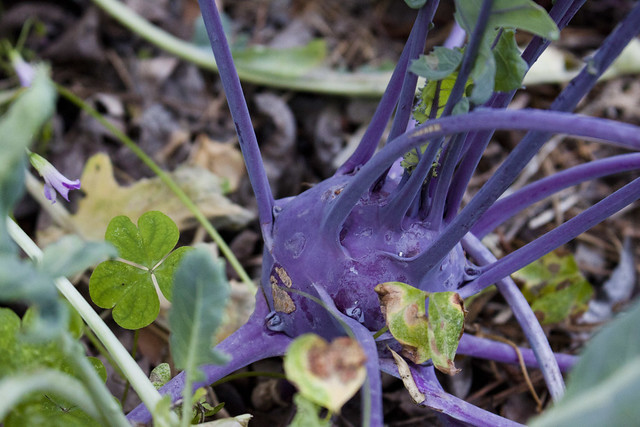 I wondered for months if my kohlrabi was ever going to bulb up as I watched Texas gardener after Texas gardener show theirs bulbing up. Finally it happened and I’ve been using it in stir fries and salads ever since. But boy, does it really stink up the fridge. I had pre-sliced some for use in salads and at the same time we had some chicken in the fridge that hadn’t been cooked yet and I had thought it was the chicken starting to go bad. It had only been a couple of days from when we’d gone to store so I was kind of surprised. I had Chris put it in the freezer and then a few days later when I opened the kohlrabi bowl I realized it was *that* which was stinking up the fridge. Oof! 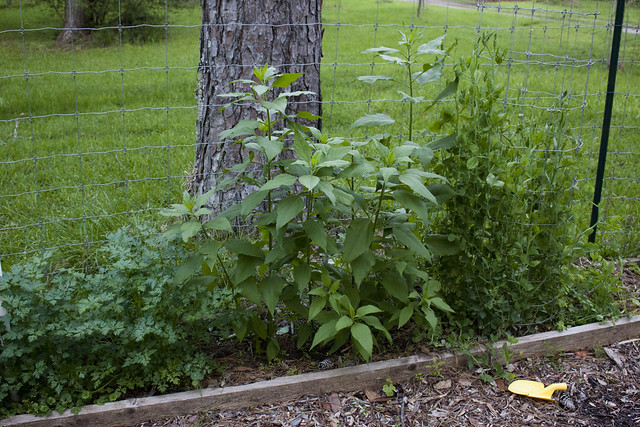 This vignette shows from left to right the parsley, sunchokes, and sweet peas. As I mentioned the parsley is bolting and the sunchokes are now pretty much taller than me while the sweet peas produced a couple of sweet smelling blooms and then started drooping when it got into the 90s earlier this week. They also broke out into an aphid infestation—the lady bugs had swooped in to do their duty—but they were done and I pulled them out. I’ll let the sunchokes spread into their territory this summer. 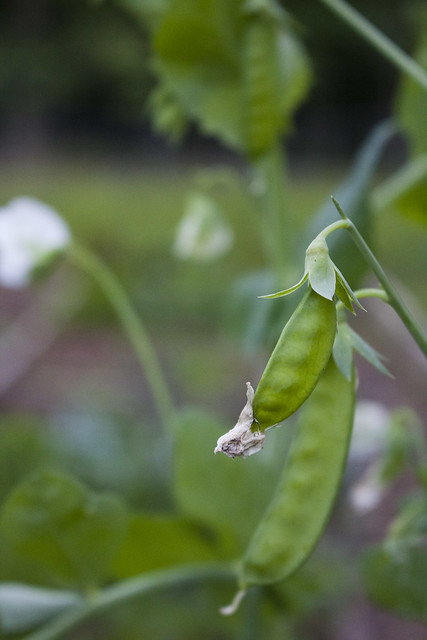 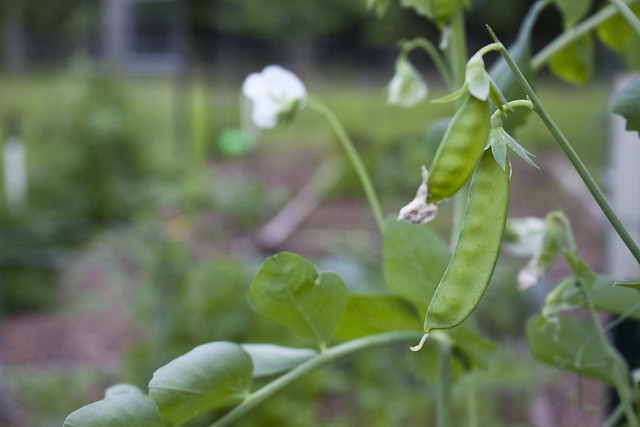 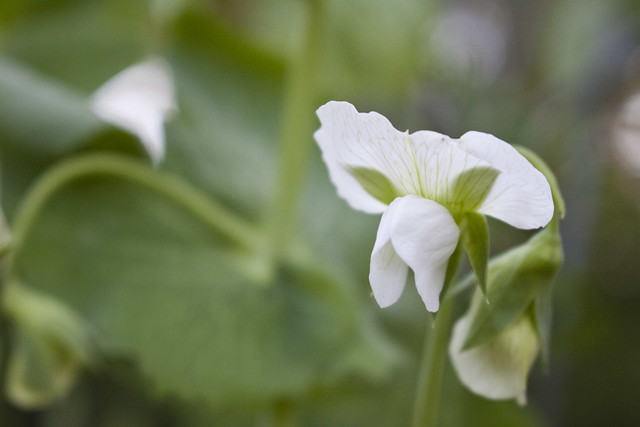 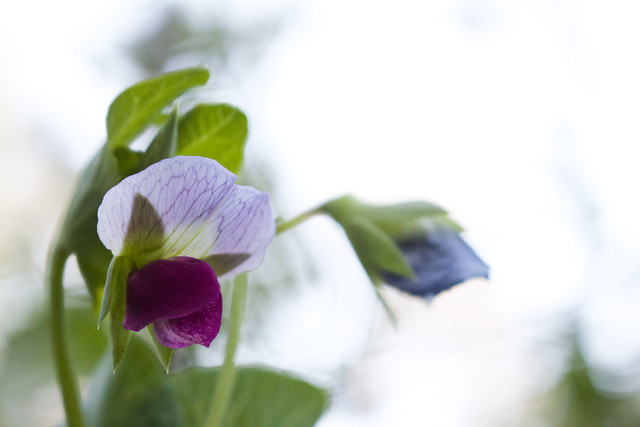 Lastly, I’ll say that while Chris did not plant a ton of snap peas this year they did produce what I would consider to be a reasonable harvest. Enough to throw into salads or cook up for dinner but not enough that we’re overwhelmed with freezing a bunch for next year. We are still eating on some we froze last year! I suspect we’ll need to go over board with planting next year because we won’t have any saved up.

I’ll be back soon with a flower garden write-up for April, a spring monarch update, and maybe I’ll get my act together to finish up the wildflower post for McKinney Falls as well as to take current photos of the yard and write about that!