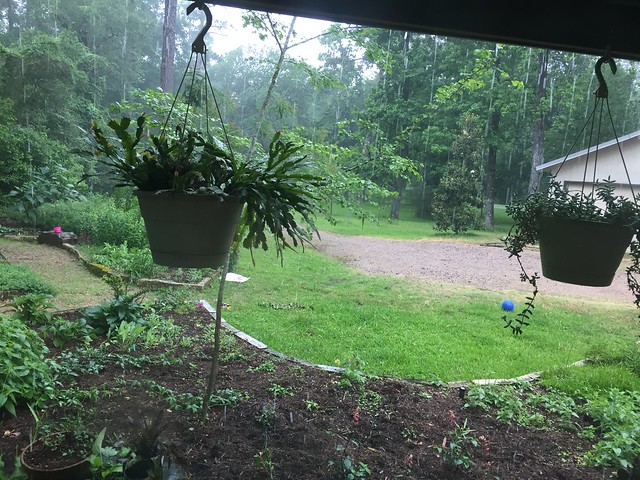 One would think that after a month or so of no rain that a few hours of rain would be a needed respite. And it was when it all started. At this point in the nearly six years (at the end of June) that we’ve been here the number of times we’ve had flooding issues has continued to grow. Frankly, sometimes I dream of a drought—yes, tempting to wish for a drought but that also has its own terrible consequences. How about some balance, Mother Nature? Or maybe we’re just screwed because we’ve effed the climate so much this is our new weather pattern? 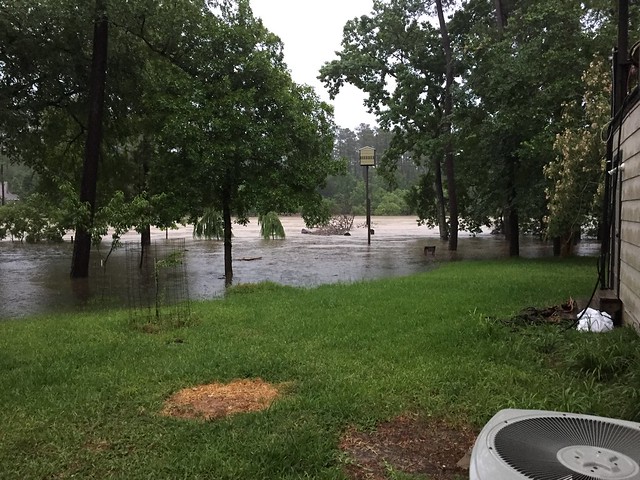 Anyway, last Sunday Forest and I were heading back from Lufkin/Nacogdoches where Chris was working and as we approached The Woodlands I noticed that the thunderheads that have been noticeably absent this spring were fluffing up on the horizon. Good, we needed some rain! We had stopped at the grocery store to get groceries for the week so I wouldn’t have to get back out that day and on the way home the sky darkened. 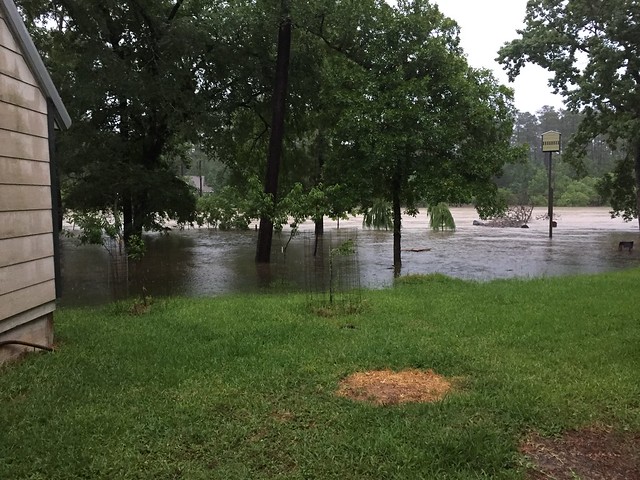 After lunch the rain started and was gentle at first with intermingling lightning and thunder to make it a cozy afternoon indoors. I prepped food for the week and Forest watched some tv and in all it was rather relaxing. 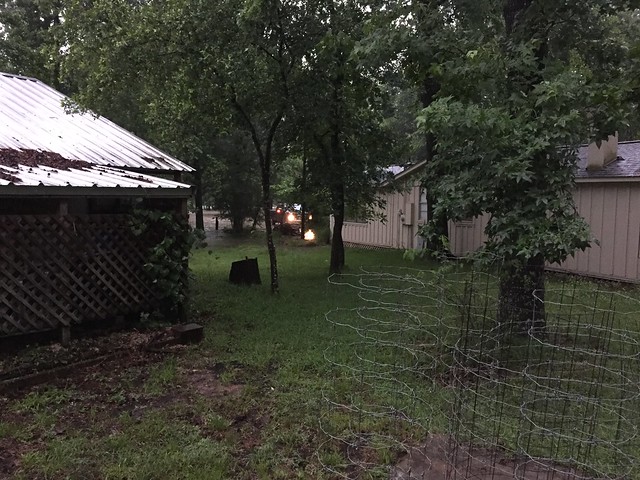 (No water flowing through here this time, thank goodness!)

By mid-afternoon there was some ponding in the low spot in the front yard which was to be expected. Meh, I thought. By 4-5pm the rain had picked up and was falling steadily and after I’d laid down on the couch to rest my eyes for a bit I got up and noticed the pond had risen into the backyard. Ok, well, it had rained steadily for a few hours, that would happen. 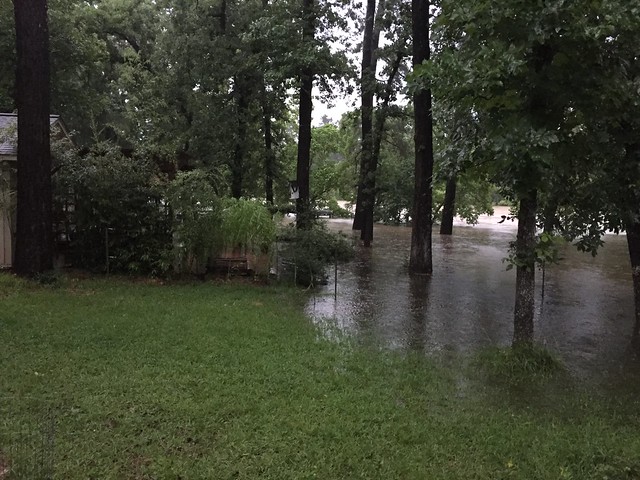 I looked out front and the water was higher there as well, inching into the edible garden now. *sigh* alright, we’re going to do this thing again? Ok. Fine. What was I going to do about it? 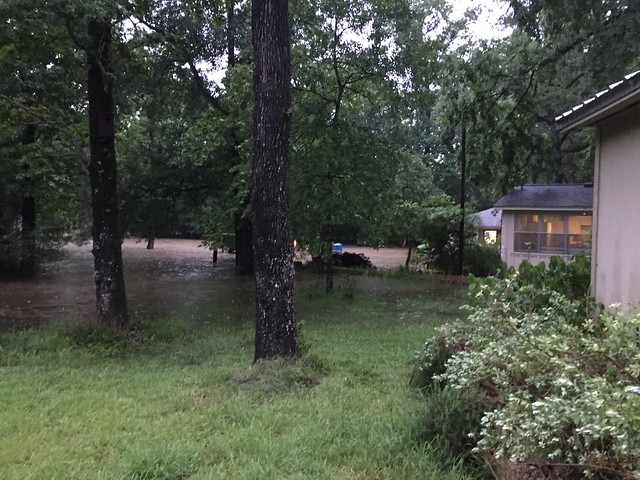 By dinner time it is getting higher in all areas around and somewhere around the 3-4pm time frame the lights had also started flickering. I had been trying to dry laundry and the drier wouldn’t stay on and then the microwave had some issues running as I heated up something for Forest for dinner. Great. I turned both off and just hoped the rain and wind was what the problem was. More on that in a bit. 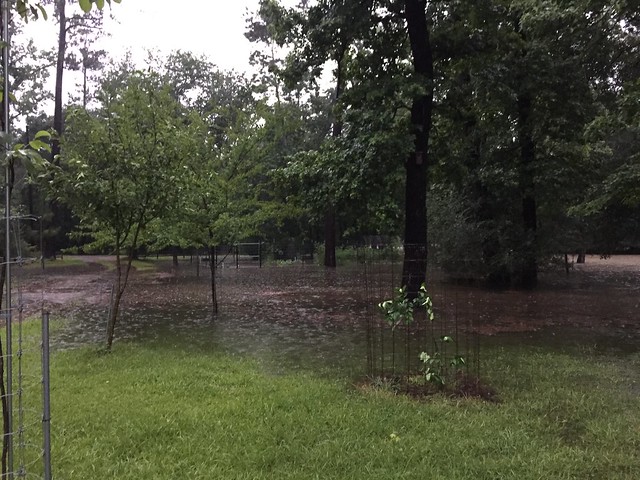 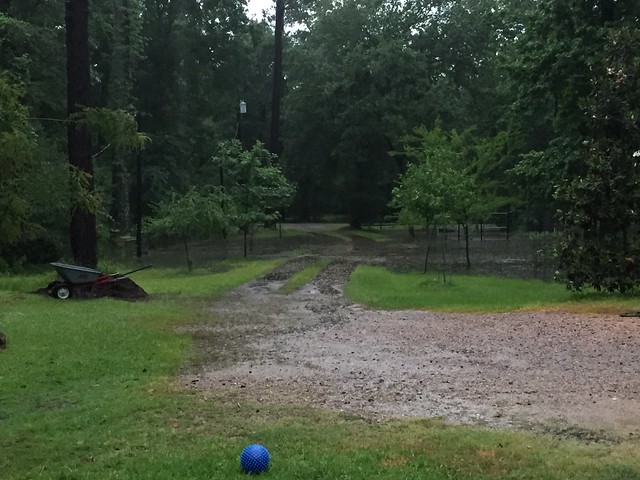 So after dinner the rain was still going and the water still rising somewhat. My neighbor two doors down had tried calling me because she smelled gasoline and wanted to see if I smelled it as well. I did not. I for certain did not want to be smelling gasoline with flood waters all around. Not on my agenda for the evening. She had called our shared neighbor between us to find out and they didn’t smell it at the time, but later I found out they did end up smelling it as they were leaving to move their vehicles to higher ground.

I went for a run the day after and I did end up smelling something off in the vicnity of the neighbor’s house, though the flood waters had already receded. Something had spilled or floated down the creek for certain. 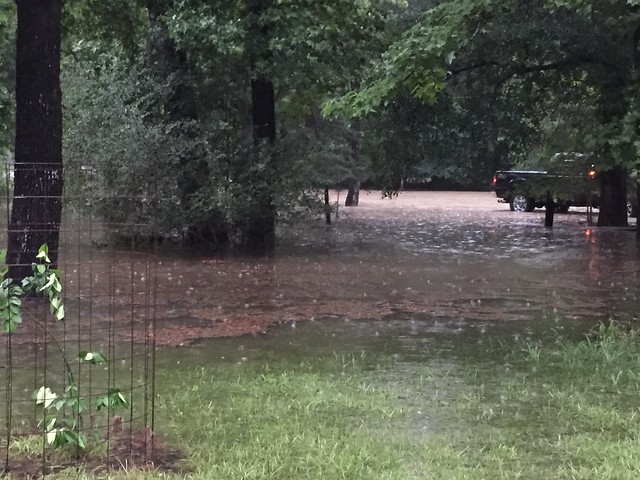 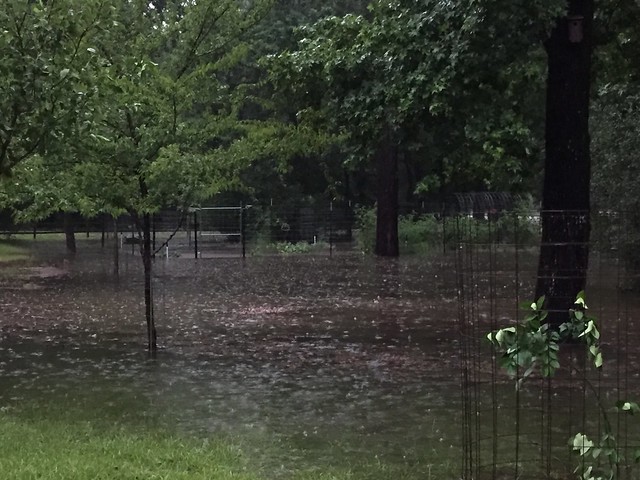 Meanwhile I’m texting with Chris and at some point he Facetimed me and I showed him what was going on. We had a camp chair out near the bat house that had eventually gotten submerged about half way and I ended up putting on his knee boots to get out there and get it and swamped them in the process. In all of this, Forest is toting around behind me, not into the water of course, but to check things out.

The thing is, it wasn’t supposed to rain this hard and everything was supposed to pass quickly. Even the issued Flood Warning that came through an hour after things got worse seemed a little too late—as if they weren’t expecting this little flash flood to happen! 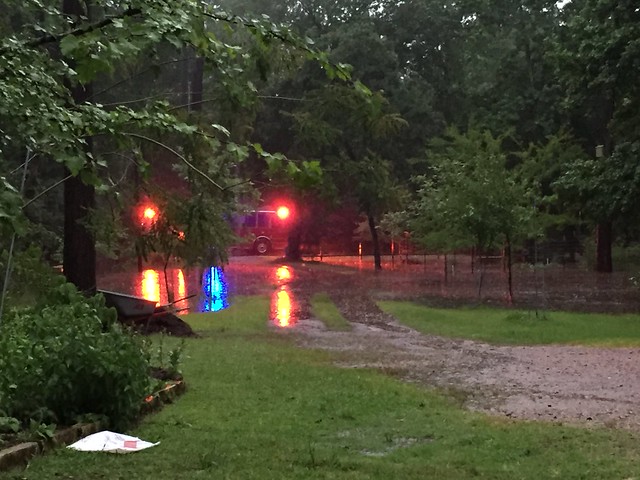 I don’t know what these guys were doing but they came whirring by the house, slowed down and then backed up. I presume because the water was too deep down the street for them to continue.

As for the flickering lights, they were still going on at 9pm and I mentioned it to Chris at that time because the rain had finally stopped and I had thought that the lights would have fixed themselves too. Googling ‘flickering lights’ will definitely cause a panic because that means worst case scenario you have a wiring problem and your house could burn down or the other scenario there’s something wrong down the electric pipeline that is causing the issue. I had hoped that was the case but didn’t know. In the meantime I went around and turned off all the lights we had on, including our lights outside that light up around the house at night, turned off the man-cave a/c and the main a/c as well. And in my paranoia about a house burning down I got our shoes and my purse together in case we had to flee!

I had also been reading on our local NextDoor group and everyone else was talking about their flooding issues in the surrounding area so it wasn’t like we were alone. Someone in our city directly posted about their AT&T service being out and I mentioned mine was working but that I had flickering lights. And then several people chimed in they had the same thing which had me running outside to look at my neighbor’s house and their’s was flickering and I called my neighbor back and hers was flickering too. So, *phew* it wasn’t my house about to burn down.

As for living here and continuing to deal with flood issues—well, as long as we live here we’re going to have this but it definitely seems that this has become more prevalent occurrence compared to the last several decades based on what other people who have lived here for a long time have said. While there have been flooding events from time to time, yearly or multiple times a year events have become more frequentt. We could talk about several things affecting this such as continued growth in the area, maintenance of streams, creeks, and ponds (ours has silted in significantly in the last five years—it needs to be dredged but it isn’t going to happen because $$$), among many other things. All of this has definitely caused an interest on NextDoor in wanting to get something done such as a county flood district like Harris county (Houston) has, which is great but unfortunately people continue to vote against their own best interests.

And as for the garden, while the initial siting of the garden was the best spot in the yard, I’ve definitely thought that maybe we need to reconsider another option. Because having my garden flood yearly is really beginning to get on my nerves. I lost a few plants out there but it was mostly a mulch mess this time around.

But yeah, 8-10″ of rain in one day after a month without it—I think we’re good until July without rain. Unfortunately we’ve had spring/summer afternoon t-storms popping up all week so I don’t think that’s going anywhere any time soon.

Oh, and if you live anywhere in Houston, buy some freakin’ flood insurance. This should be a given by now.