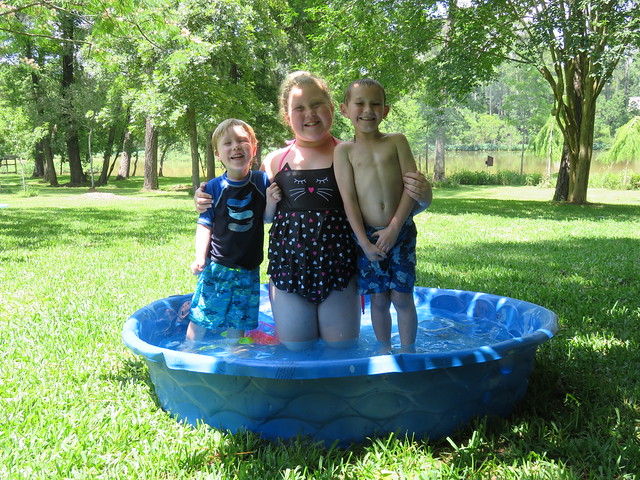 +In My Head
We just had a great long weekend with all of my family down to visit. It’s been a long time since we’ve had both my parents and then Curtis, Stephanie, Zoe, and Grayson all over at the same time. Having a three day weekend made it worthwhile to have everyone down. Often if we try to cram everything into a typical weekend it feels too rushed and there’s not enough time to enjoy everyone. This weekend we had plenty of time to go to the splash pad, the plant nursery, plenty of time playing in the kid pool, running around the yard, and loads of other things! I lost count of how many time we ran the dishwasher—we were running it at least three times a day! My mom even brought their new ice cream maker so we had homemade vanilla with fresh blackberries from the garden!

Forest and Grayson are at such a great age to hang out together and definitely miss each other when they leave. And Zoe, I can’t believe she will be 10 this summer!

+Watching
Nothing. All of my shows are on hiatus and it’s been too crazy to start something new so I haven’t watched anything. The only thing I watched in spurts was the royal wedding and I still have the rest of the ride through Windsor to watch. I got up early to watch Will and Kate’s wedding and remember some of it vaguely but this one was definitely the one where you are excited for her but also incredibly jealous because in your head as a kid you were going to be the American girl Will or Harry swept off their feet (or else there wouldn’t be a million Lifetime-esque movies in these vein). But then as you read about everything she has to integrate to become a royal you start to re-think that whole royal thing. Yeah, jet-setting around the world is great but then remembering who to curtsy to and all of the social status stuff?? I did enjoy all of the celebrities filing in during the ceremony but my favorite part was watching Meghan’s mother, Doria Ragland. I just wanted to sit next to her and hold her hand during the ceremony. She looked excited for Meghan but also very nervous about the whole thing. This was a really great article: The Profound Presence of Doria Ragland via the New Yorker.

+Outside My Window
Sun, blazing sun. The good news is we aren’t scheduled to be in the 100s this week like the rest of the state, the bad news is with the humidity it will feel like it anyway. Good times!

+In The Garden
I’m attempting to get all of the gardens in as good of a position as I can before we leave for vacation. That means constant weeding, getting plants and seeds sown, and just prepping as best as I can. I’m thinking the only thing that won’t get done is the flower garden path, though I’m going to do my best to start weeding that and pulling the most obnoxious weeds. I’m currently writing this up while taking an a/c break from pulling the weeds in the edible garden. Another 1-2 hours out there and it will be good to go for a few weeks.

Currently, the blackberries are starting to roll in. Thank goodness! We’re eating those and some Matt’s Wild Cherry tomatoes. A Creole tomato is this-close to ripening and I can tell a few others are wanting to turn. But I seriously doubt the bulk will be ready before we leave so I’ll probably tell the neighbor to get some tomatoes if he sees them ripe while we’re gone. No reason to let the birds get them.

And I’m a little perturbed that my Seminole pumpkins aren’t germinating. I did see one finally come up but I think that was from a the second round of seed planting. I used the original seeds I had first but nothing germinated and then two weeks later went back and sowed the ones I saved from last year. So far one has sprouted. I guess I’ll try to sow a few more seeds and see what happens.

I need to start more cow peas. The ones I planted a month or so ago are now flowering and starting to produce! Woohoo! And I just sowed various green beans and they are starting to thrive, though I need to go back and sow a few more in some gaps that didn’t germinate.

I’ll wait until we get back to sow some other items, though maybe I should just do it before we go so they have time to grow while we’re gone.

+Reading
I’m in a lull at the moment. I need to get back into some Net Galley books I have because some are about to expire.

+Loving
+Schmidt’s Natural Deodorant: I’ve tried my share of natural deodorants over the years only to go back each time to a conventional brand. The B.O. stank just got too bad and I gave up. But I’ve been hearing about this brand for awhile now, originally via The Girl Next Door Podcast and other people but I just never wanted to break down and order it online, which is only where it was found for a good while. Or at Whole Foods and the like which isn’t near me. But someone tipped me off that it was at Target and only $4.99 so I bought one and I love it! It has worked really well for typical work days and general outdoor activities but I did give it a run for its money this weekend. While I would say that even in some moderate Texas summer sweating it works fairly well, if you go all into hardcore Texas summer outdoors and get really dirty, at some point your whole body just smells so the point is really moot anyway. So far I’m liking it though and hope it holds up!

+Levi’s 529 Curvy Bootcut Jeans: I was in the market for new jeans last month and found some Levi’s on sale at Kohl’s. Now, I tried to find these same jeans on the Levi’s website and they do not come up, so I’m unsure why there’s a difference. I’ve always been a bootcut type of person, mostly because I have thighs and calves that just do not work with skinny leg jeans, and I like the leg room. These are super comfortable!