The first campout for the season didn’t start off quite on the right foot. Rain was predicted for at least Sunday but we ended up having a little of it on Saturday while we were setting up camp. We drove over early on Saturday morning and were making it a long weekend with Monday off. The last time we were at the park we had stayed at campsite 218 across from Gum Slough. I remember liking that little circle because there was no thru-traffic and I wanted Forest to be able to ride his tricycle without a lot of traffic. Not that the park was very busy anyway–the predicted rain meant a lot of people canceled their plans. The last time we were here the place was packed, including the walk-in water only sites! 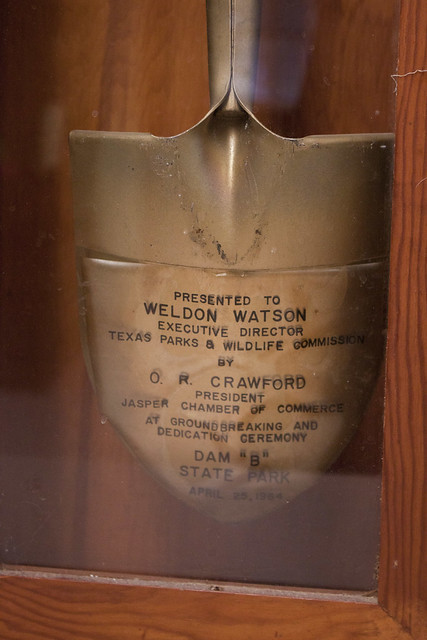 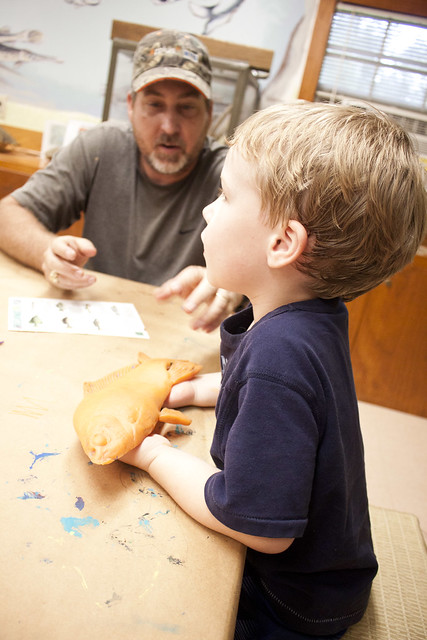 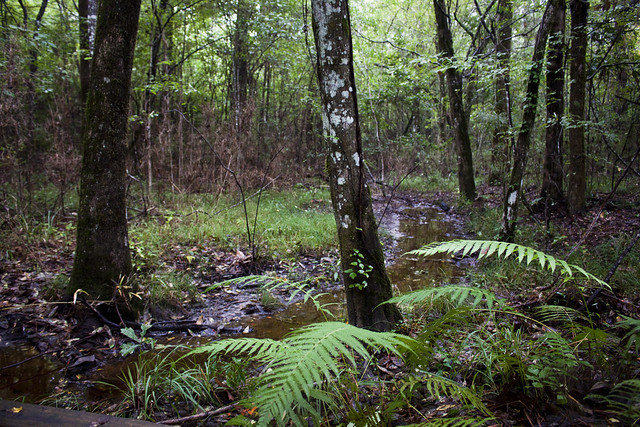 When we checked in Chris opted for site 216 since it was on the water and he could fish, however when we arrived at the site there was a piece of paper at the sign saying the site was closed. There was no obvious reason why but we thought maybe the electric didn’t work or something. I called the office and asked them what it was about but they didn’t know and suggested we just move sites. So we moved to 217.

I’m a firm believer in park offices having a good idea of what sites do what during certain weather events. I think the last time we were at Huntsville State Park they had photos of their campsites so you could see what they looked like as you selected them. This might be a moot point soon because Texas Parks and Wildlife is supposed to be switching to a system where you can reserve the campsite you want when you make the reservation. I never understood why they hadn’t upgraded to this long ago—that was what Florida State Parks had. 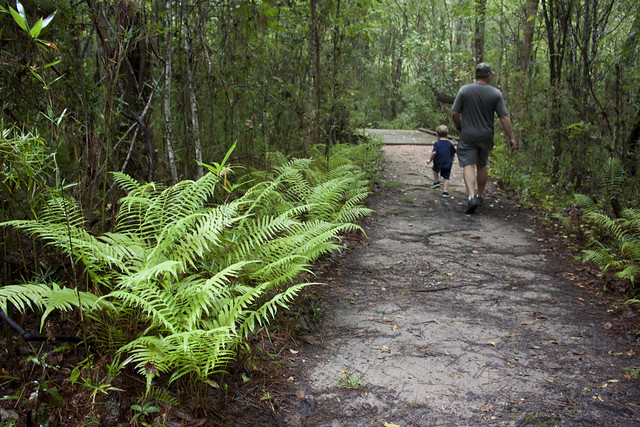 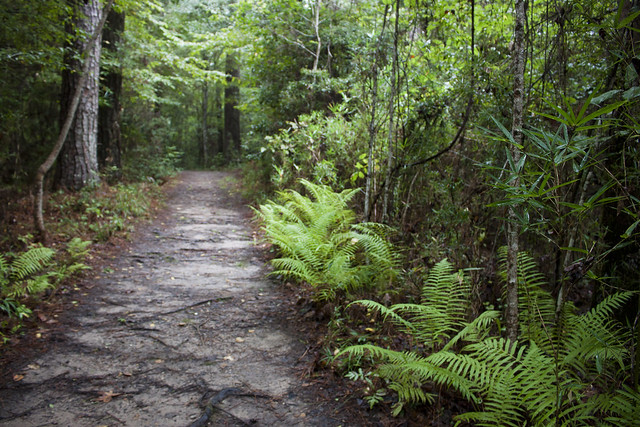 Saturday we set up camp, ate lunch, and then went over to the nature center to do a fish print craft. I was honestly surprised how many people came considering the weather but it was a full-house inside. We all made fish prints and had a bit of fun and then went to Jasper to pick up a couple of things we had forgotten and Chris wanted some candy and fishing gear. We walked around Walmart for a bit and then headed back to camp. We tried to take a hike down the Slough Trail but quickly the mosquitoes began attacking. Retreating, we headed back for the campsite and planned to try the trail later when we had better mosquito spray, which was at camp. 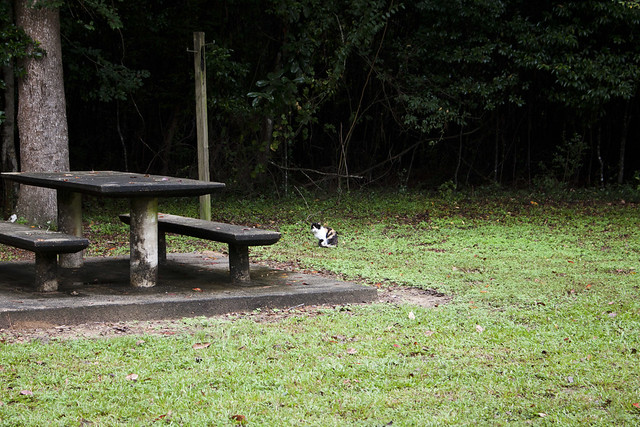 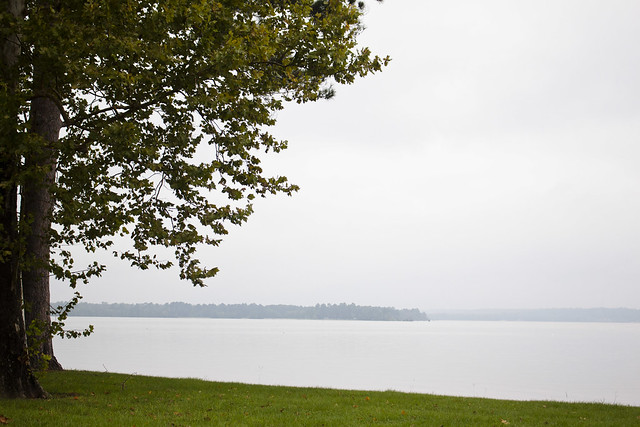 Mostly we lazed around the campsite on Saturday. It rained just a bit but wasn’t too bad that day. Forest and I walked over to the playground and lollygagged on our way back to camp. 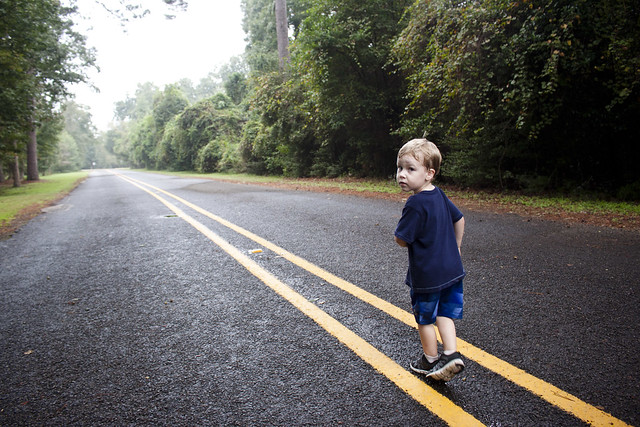 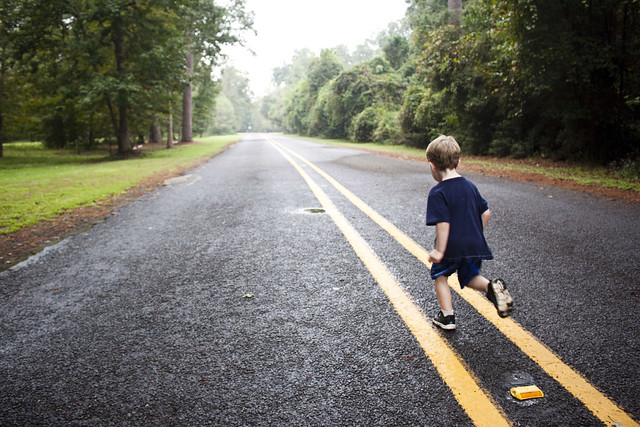 Overnight, the rain moved in. We slept in for a bit and got up not long before the bottom fell out. I had managed to get coffee made and was about to start making breakfast when we all had to huddle under the canopy over the picnic table. Chris looked at the radar and it wasn’t going to stop anytime soon so we piled into the truck and drove back to Jasper to find a late breakfast on Sunday. We ended up a diner/restaurant in a low-rate hotel but they provided a greasy good breakfast and that’s all that mattered. 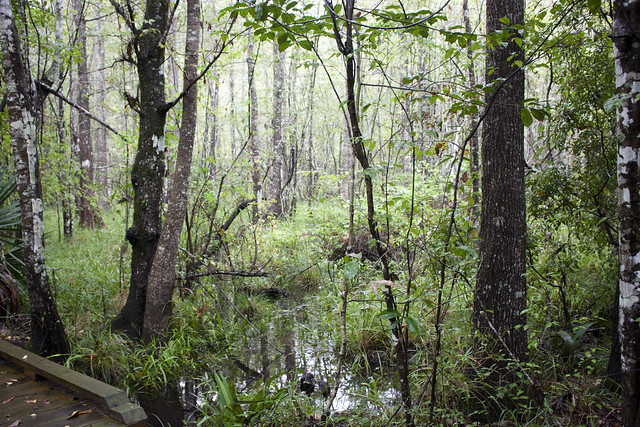 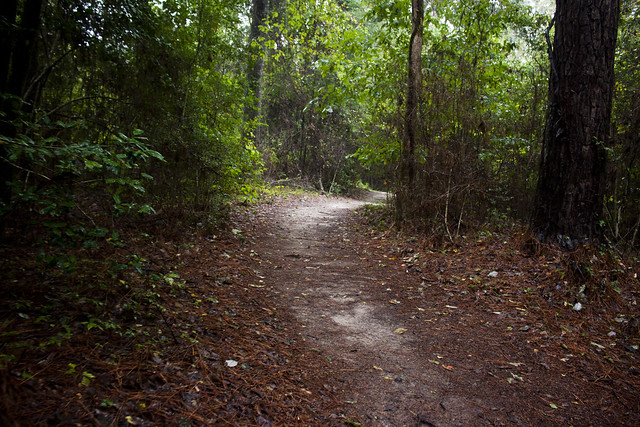 It hadn’t rained that heavily in Jasper from what we could tell and it was somewhat clear back at camp so we opted to re-try our hike from the previous day. It was mosquito filled 2.2 miles on the Slough Trail with hardly any stopping to take photos. I was bummed when we found a ground hornet nest and I couldn’t stop to watch because the mosquitoes would have carried us away. Forest managed to walk the entire time, though not without a lot of begging to be carried. 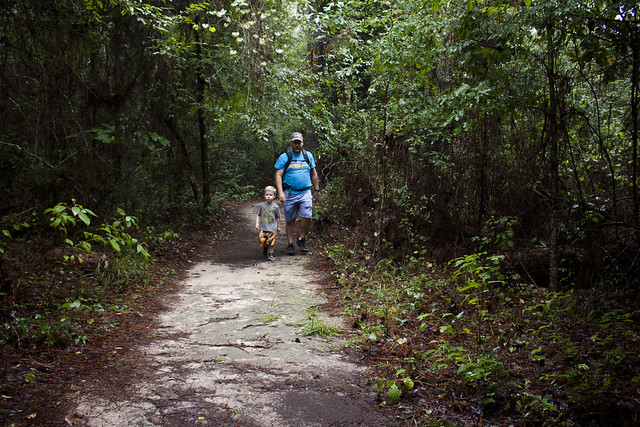 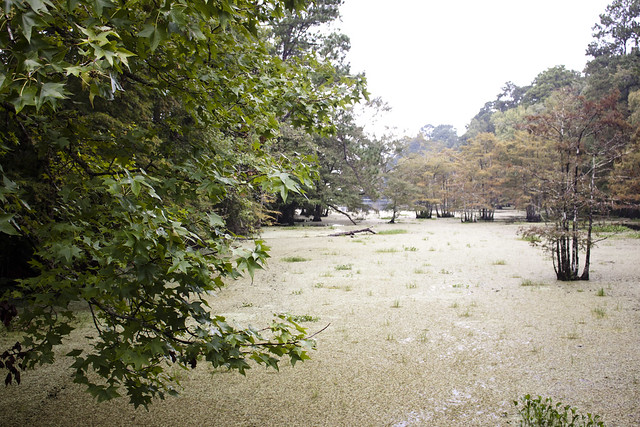 We took the long way back to camp and looked at the lake on the way back with some dubious looking clouds on the far southwest. Sure enough by the time we got back to camp we had noticed severe ponding happening at the site with a corner of our tent sitting in the water. Before we had left I had moved a lot of our stuff to a central area of the tent because our fly had been leaking. Chris had planned on spraying it with sealant at some point that weekend but it had stayed wet so much that we didn’t get the chance. Before we had left for breakfast the drips started. 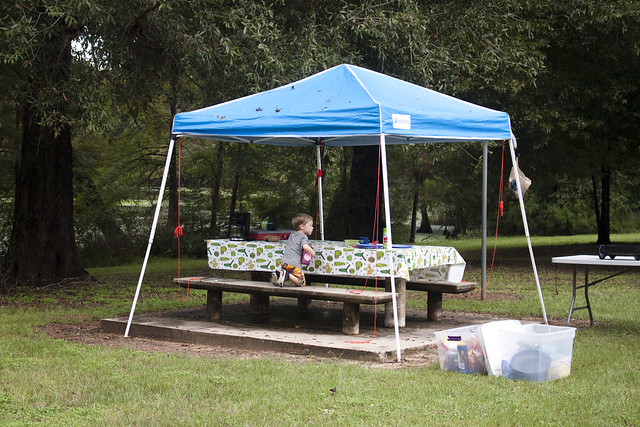 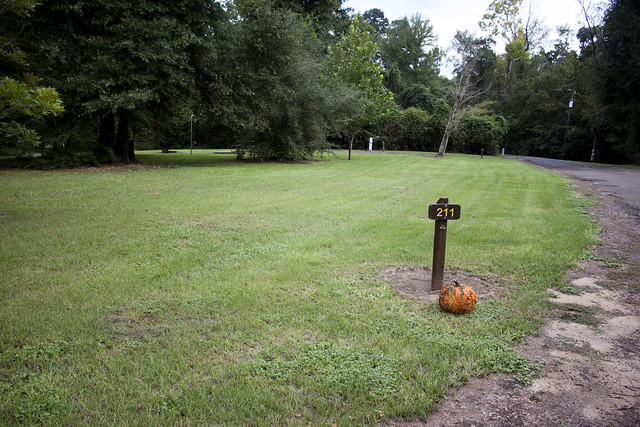 So, ponding at the campsite and then the bottom fell out from those dark clouds. We all sat in the truck for awhile during the heaviest part of the rain and Chris got out when it let up a little to attempt to move the tent out of the water, which was much worse by this point. We were not going to be sleeping in water overnight. 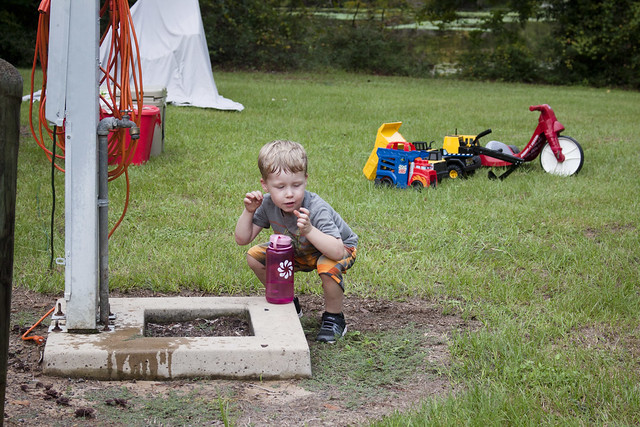 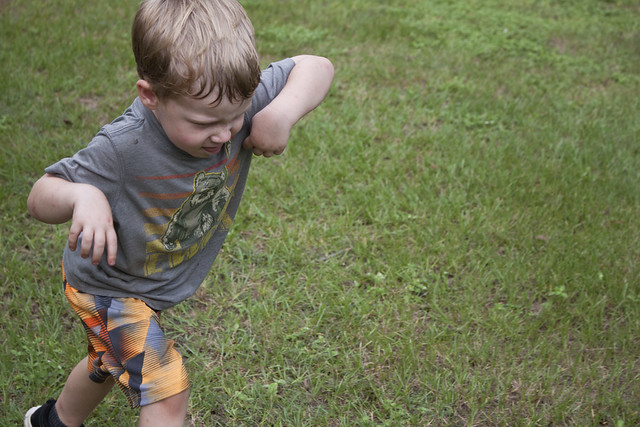 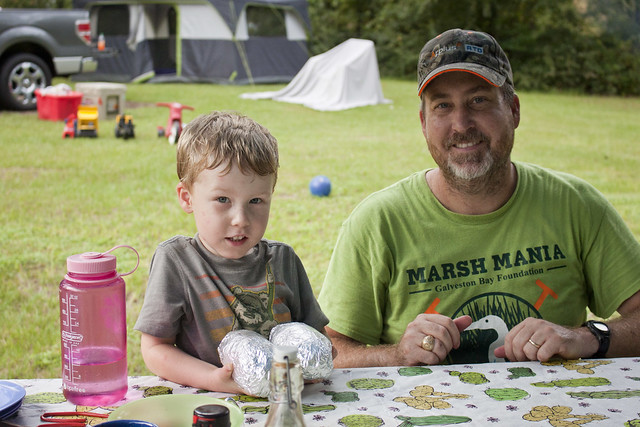 This is Sunday afternoon—with the rain the park was really cleared out by now so we had the best pickings of where we would like to camp. I had wanted to try to stay in the circle but Chris didn’t like the fire rings (standing water) and so we decided to throw everything in the truck and went over to site 211, which was high and dry. In fact, it didn’t even look like it had rained on it, that’s how high and dry it was. And it had a lot of space to move and play—I would definitely choose this site again. 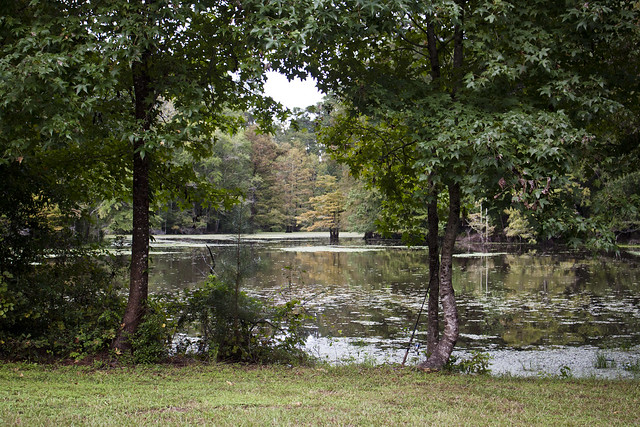 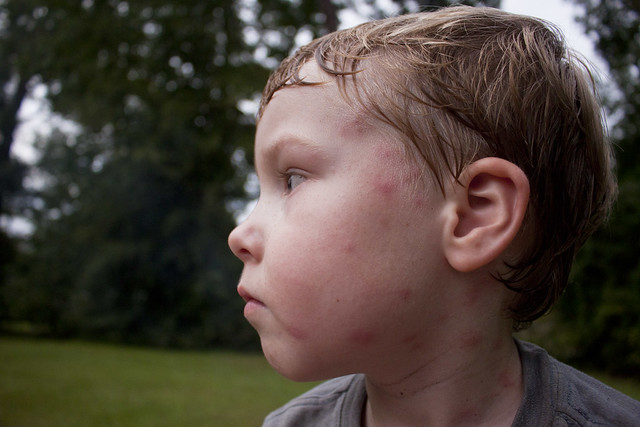 The rain moved on and Forest and I made another loop back to the playground. Forest played dinosaur and chased dragonflies and I wandered the pond edge taking photos and Chris fished. Sunday afternoon turned out to be a great day later on—it was Chris’ birthday, too! 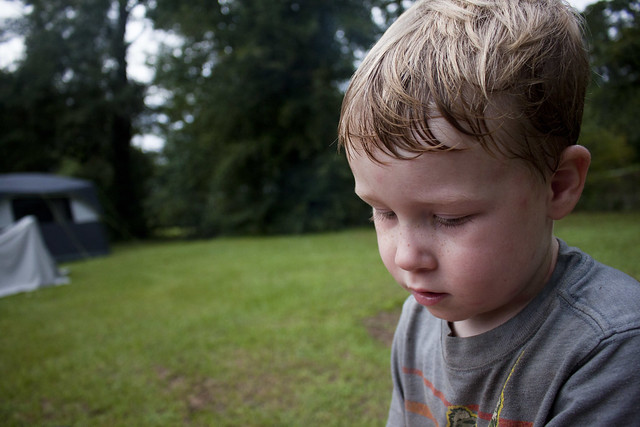 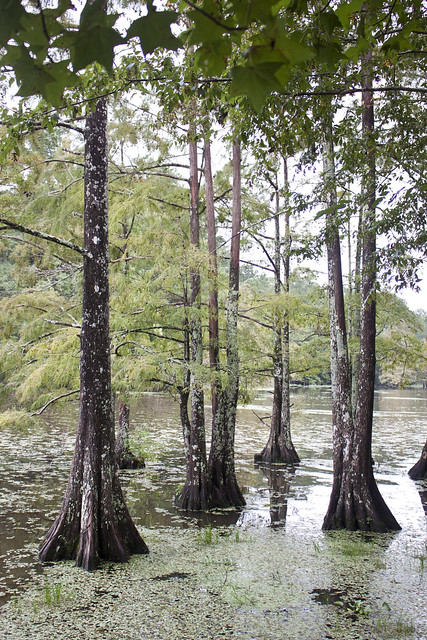 On Monday morning we went for one last mosquito filled hike on the Wildlife Trail on the north side of the park. Protected by DEET, we were able to pause a little more to take photos. 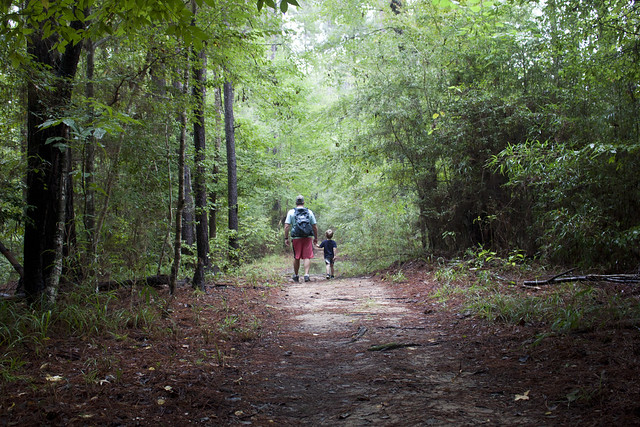 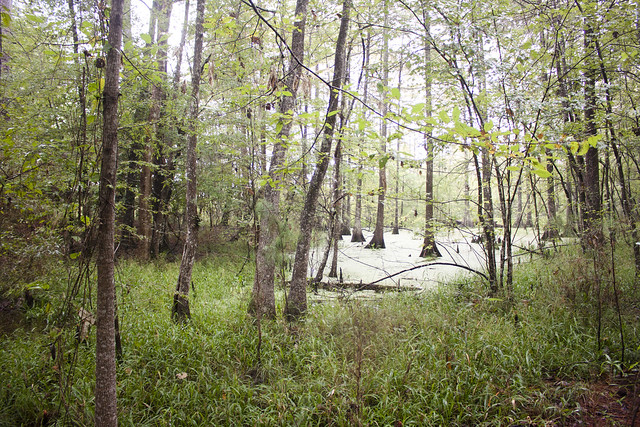 I will say, I love having the campground to ourselves. I think next year I want to have more Monday return days instead of taking Fridays off to camp. Yes, you might lose out on a good campsite by going on a Saturday but you get all of that quiet starting Sunday at noon. 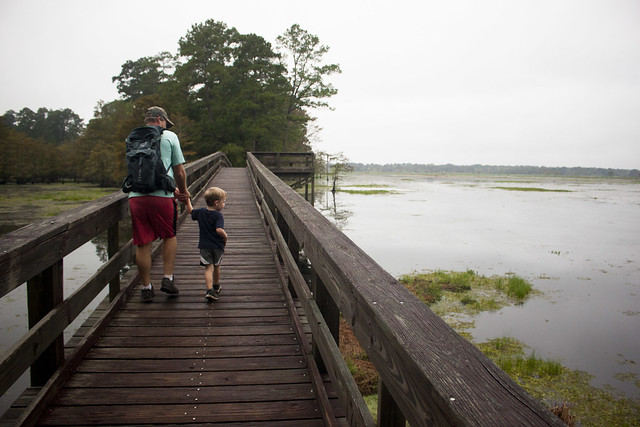 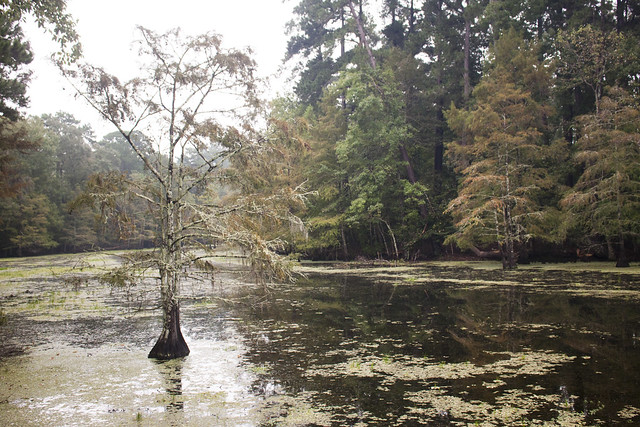 I’ll have a separate post soon with fungi, flora, and fauna from the park!