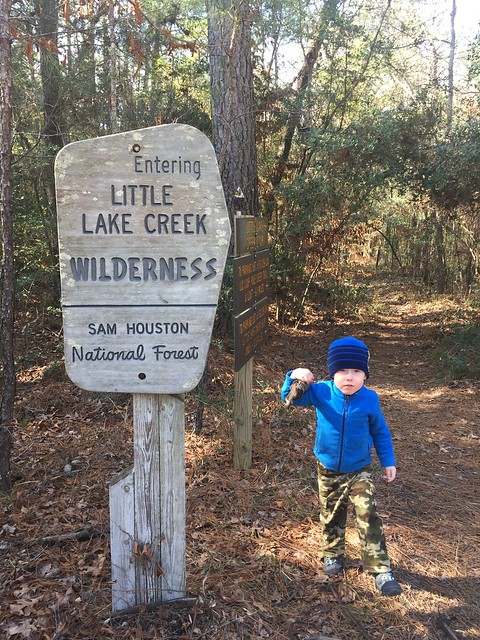 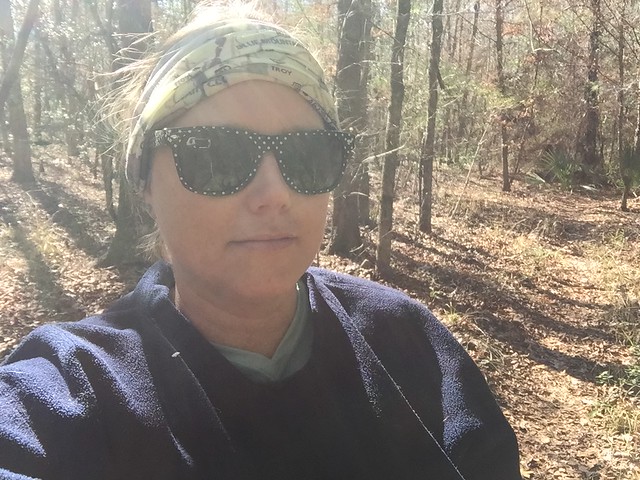 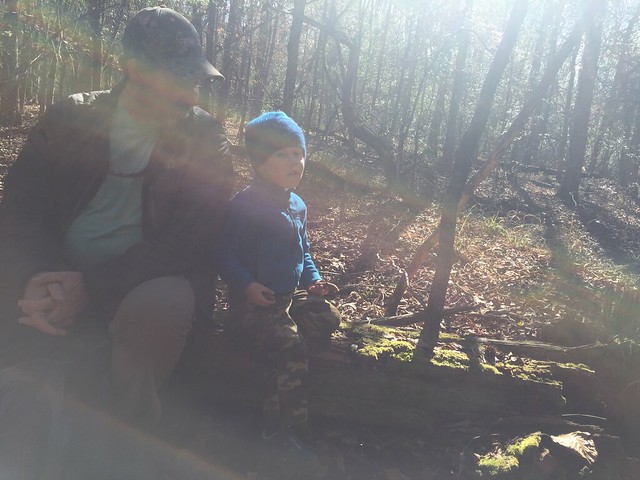 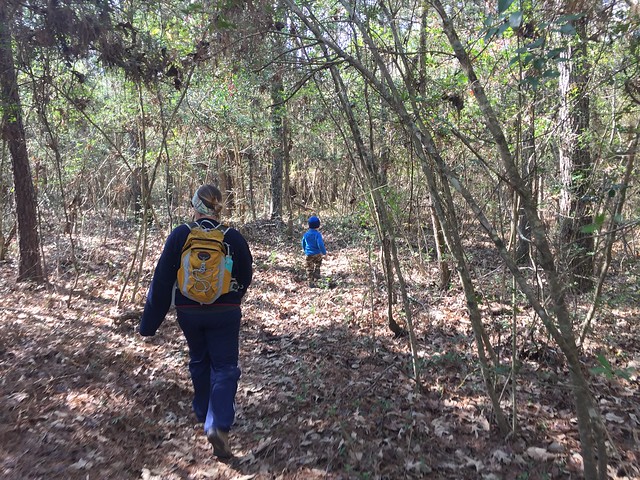 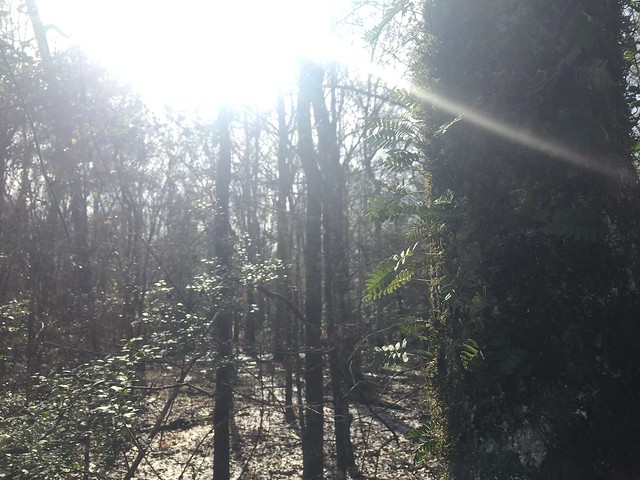 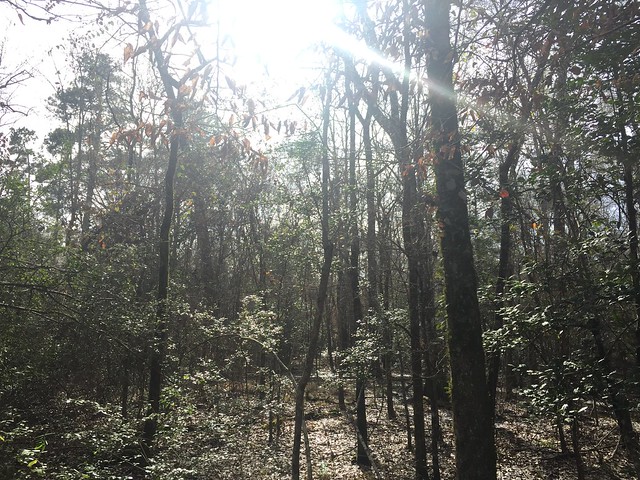 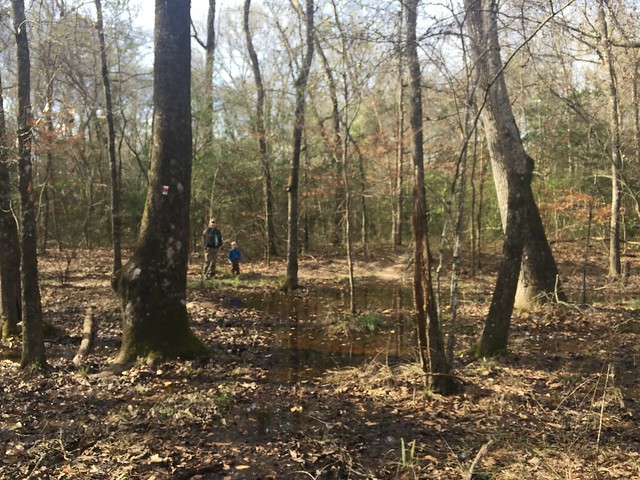 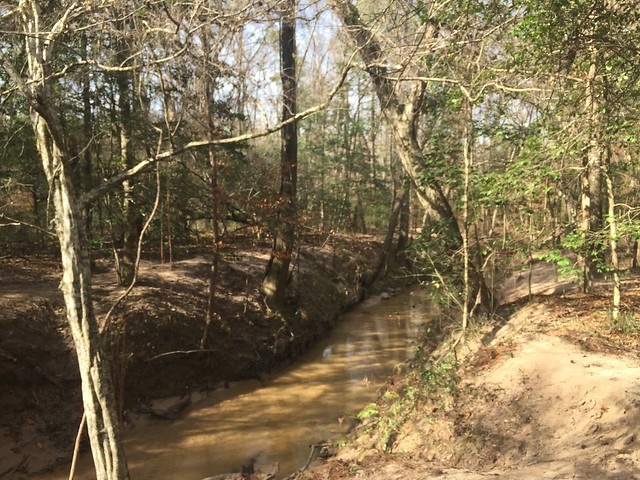 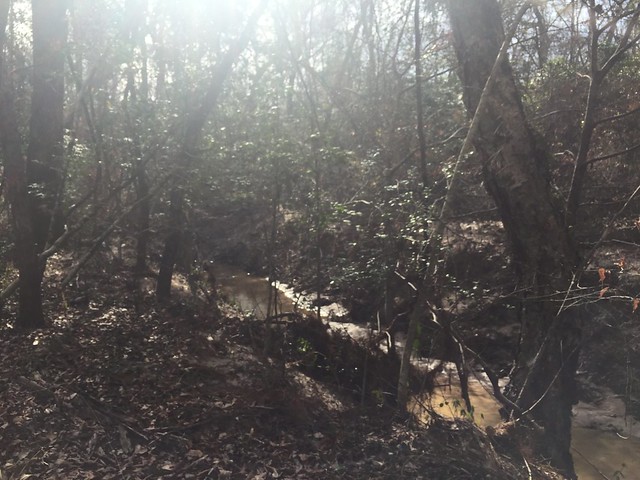 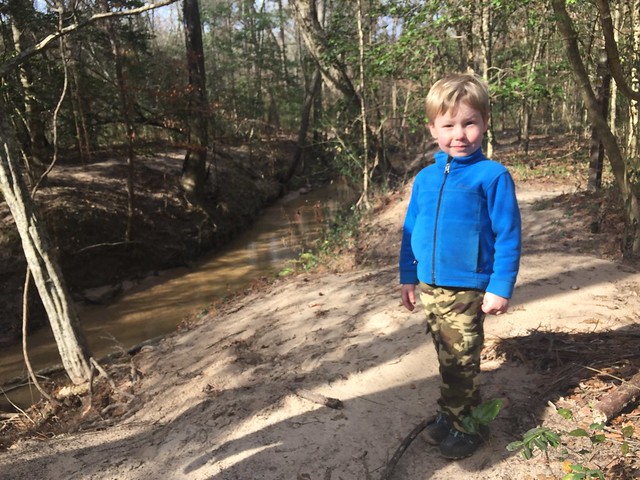 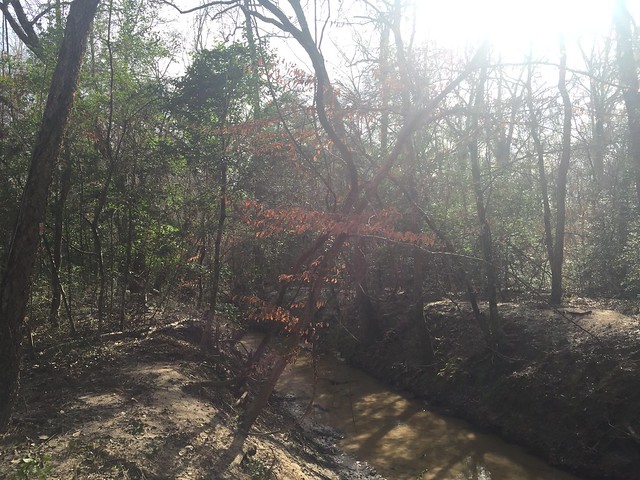 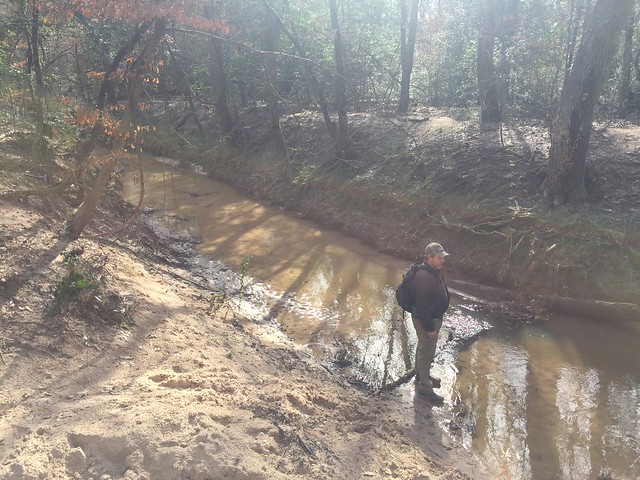 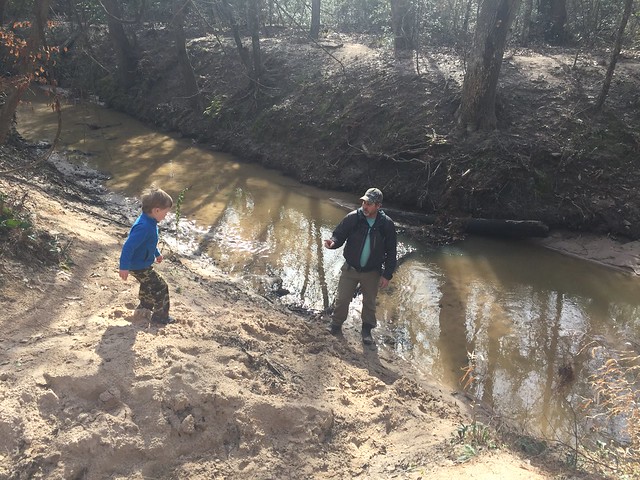 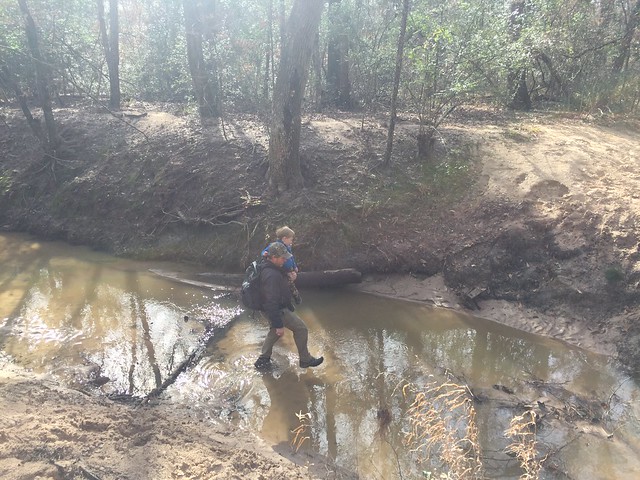 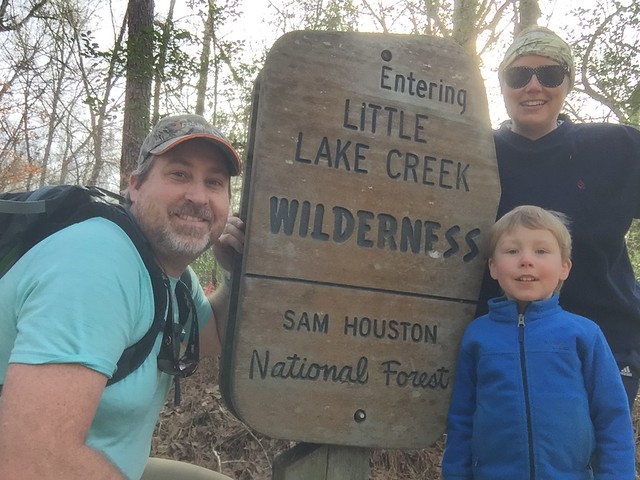 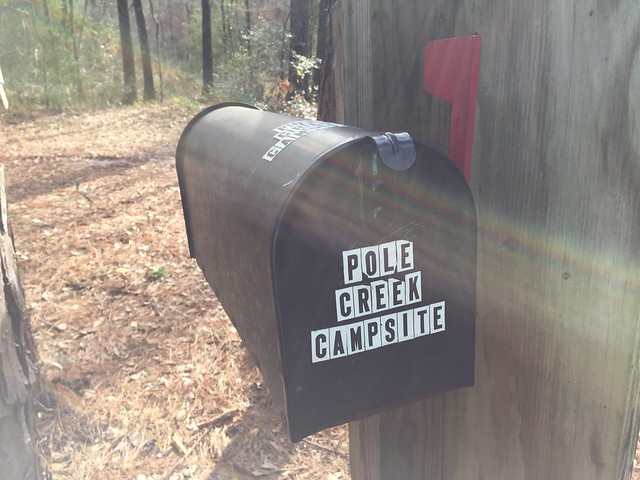 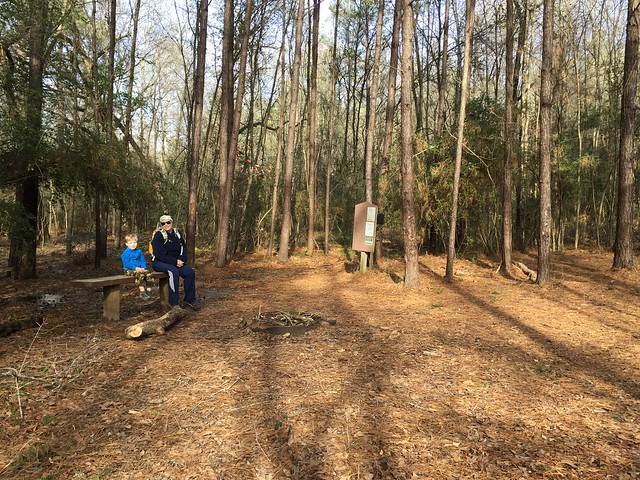 *Photos are from our phones. Left the cameras at home.*

It’s always hit and miss in December through February with camping plans around here. We canceled a weekend camping trip back in December and I thought we were going to make last weekend’s reservations but it became clear that it was going to be iffy as the week wore on with rain and cold front. The rain came at night in a short downpour leaving strong winds in its wake the next day. While it was sunny, it was also quite chilly. Nighttime temperatures were dipping in the 30s. And when it is only one night, packing for a family of three amidst cold and rain doesn’t sound fun.

That said, I think all of us wanted to do something so we made a plan to find somewhere to hike on Sunday afternoon. I miss a lot of the whimsical out and about adventures that we used to have pre-Forest, the ones where we’d go off geocaching in the afternoon and get back early to late evening. This hiking adventure felt a bit like that but with an intention to arrive back home before dinner so there was plenty of time to cook.

Considering it has been quite wet in the last few months and with the more recent rain, we thought hard about where we would want to hike. Our go-to of the Lone Star Trail seemed like the most viable alternative but as you see in the photos, it too was rather sloshy. Chris and I had actually done part of this section before back in 2011 when we did a larger loop. This time we parked at trailhead 4 and headed west along Little Lake Creek Loop with an idea to walk until we felt like turning around.

Despite a vigorous start to the hike with Forest running up and down the slopes from the creeks, somewhere around 0.8 miles in he started getting a bit stinkery, picking up large sticks that was far too big for him to carry long, slowing down, and generally being a little frustrating to hike with. After we told him to knock it off and find smaller sticks there was a melt down and then the proclamation to “Carro Me!” Yes, it’s ‘carro’ though he can say carry quite well, he just likes to bring that out when he’s needing more attention.

Being as he’s nearing 40 pounds and we were carrying backpacks, the possibility of us ‘carroing’ him was not likely. More tears ensued and protestations before I somehow managed to convince him to continue walking and change the subject to where we found a stalk of grass to pick. Mere minutes later that said grass somehow caused a cut on his finger which turned into needing to pull a Band-aid out of Chris’ pack. Luckily the cries for ‘carroing’ did not continue and a more cheerful 4 year old returned.

Eventually we came to Pole Creek and shortly after the signs for the split of the Little Lake Creek Loop and the Pole Creek Trail as well as the Pole Creek campsite where three men in their 30s or 40s (I think one of them was a teenager hanging in a hammock) were hanging out. On our way in we’d found a GPS hanging on a branch alongside the trail and debated taking it trying to identify the owner. We’d seen a car with geocaching stickers in the parking lot and thought perhaps it belonged to them. We asked the hikers who’d also mentioned they’d seen it and all decided hopefully the owners would return.

We left the day hikers and went back to the trail junction to figure out where we were going to go next. The bridge across Pole Creek had been wiped out by floods several years ago, though a piece of wood was still visible sticking out of the sand from where the bridge had once been. Chris got it in his head to cross the creek, which I wasn’t thrilled about since I’d not brought a change of shoes. The water wasn’t deep, 1-3 feet at most. Chris carried Forest across and then attempted to bolster the several logs that were sort-of used as a dry crossing already in the creek. It was mostly successful, though I almost lost my balance because I didn’t have a hiking pole or a stick to help me across. I found one for the way back.

The trail turned here to the south paralleling Pole Creek and crossing several wetlands. The trail itself was still rather wet. I think we were tired of the water and Forest had been begging for a piece of candy so we stopped for a short break and turned around.

Crossing the creek and then stopping back at the Pole Creek campsite, which has a nice log book and a great set up for an easy overnight access (I wonder how busy it gets considering it is only a mile from the road), I thought we might come back and camp there sometime this spring. A Forest Service Road led east as an alternative to getting back to FM 149 and we opted to take that because it looked drier than the trail we’d come in on. Other than some standing water at the bottom of hills it was a much drier alternative back.

We had a short road walk to get back to the trailhead since we were just a bit north of where we’d gone into the forest. Just as we were getting back to the trailhead we noticed some hunters going in and then saw a hiker come out. Turns out it was the person who owned the GPS! He’d gotten all the way home and realized it was missing and had come out to get it! Good thing we hadn’t picked it up.

In all it ended up being about 3.5 miles according to my Garmin.