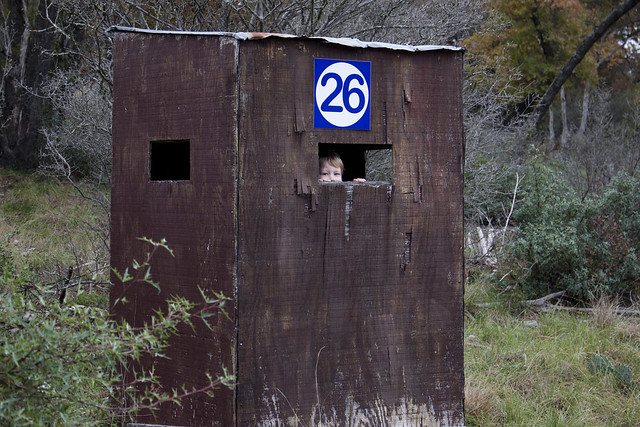 Thinking:
While we were camping last weekend we had to take a road back to make it a loop to the car from the trail we were on. About 10′ off the trail into the vegetation was a large empty chip bag. I deviated off the road for a moment to pick up the back to LNT the thing and as I was stepping off the trail Forest says “Are we going bushwhacking?” Chris and I chuckled because it was so funny and he used it in the right context! I was going off the road but not with the intent to bushwhack back to the parking lot so I explained I was picking up the trash. I did think that we were about due for another bushwhacking adventure, though!

Gardening:
It looks like winter is having its last stand this weekend and early next week, with temperatures predicted to dip into the low to mid 30s. I was hoping to get the tomatoes planted in the ground this weekend but looks like that will be delayed until late next week. I know that Chris was looking forward to not shuffling all of the tropical plants back indoors again but that’s not going to happen. I too will move a few plants, definitely the tomatoes and peppers.

The edible garden is on the precipice of change. Several cool season crops are bolting and I’m hoping that others will hold off for another 6-8 weeks, particularly the collard greens! I’ll be sad when salad season goes away.

A few weekends ago we picked up a lot of plants at a couple of different nurseries and we’ve been working on getting the flower garden into shape. I need to start going through and picking the elm, pine, and Virginia creeper seedlings that are coming up everywhere before they turn into small saplings and vines. I’m going to be interested to see how a lot of the native seeds I sowed (and some of the non-native ornamentals) do this year.

Loving:
+MyFitnessPal
+Girl Scout Cookies (yes, this is ironically following MFP!)
+My only surviving phalenopsis orchid at work is putting out flower spikes!
+Looking for pots of native plants that I can see can be easily divided when I’m at a nursery. I’m all about looking for the pot with the most plants or ability to be divided—more plants for the $$! Yesterday I separated out 10-12 Brazos penstemon seedlings that otherwise looked like a large single plant. Nope, a bunch of different plants. I think that was a $2.99 4″ pot at The Natural Gardener in Austin (stopped by there on our way home last weekend), so that’s a lot of plants for not much! Now, if I can keep the deer off of them.
+My Desk Cycle Ellipse. Can’t remember if I wrote about it here yet but I won it on a blog contest and I LOVE it! I use it a couple of times a day in chunks and love being able to move while still getting work done. One of the downsides to my job is how sedentary it is.

Reading:
This month I read Thirst: 2600 Miles to Home by Heather Anderson, which I loved! It’s about Heather’s PCT FKT hike in 2013. More recently I finished The Pursuit of Endurance by Jennifer Pharr Davis which chronicles the back stories and side stories of FKT holders on the AT and PCT. I enjoyed reading the book but thought that the title was a bit misleading for someone who might pick it up thinking it was about endurance athletes across different sports. I also finished a fiction book this month and will talk about it when I do a book report next month.

I’m starting Natural Companions by Ken Druse on my Kindle. It’s a beautiful book of scanned floral plantings with descriptions of the plants and gardening advice. I’m a fan of Ken Druse so I’m sure I’ll enjoy it! I’ve got a few other books I’m in the middle of as well.

Making:
Photos, writing, podcasting. Not much time for anything else.

Watching & Listening:
Grace and Frankie: I binged this over the end of January and early February. Found it hilarious and enjoyed it!

Russian Doll: Natasha Lyonne is one of those character actresses who you can easily enjoy whatever piece of work she’s doing. This is a bit of a re-mix of Groundhog Day with some darker subject matter.

I’ve been catching some Downtown Abbey recordings that are randomly recording on DVR. It is making me miss that show a lot!
Still watching Grey’s Anatomy, Victoria, This is Us, and Big Bang Theory.

I’m actually looking forward to summer when there’s less to be watching!

Loved this 15 minute documentary of YouTube of Stringbean’s FKT on the AT:

And really enjoyed this 20 minute slightly tongue-in-cheek early 80s AT Gear Review on YouTube–h/t to Mags:

On the podcast front:
Sworn Statement Podcast put out by the Collier County Sheriff’s Office. The first three episodes are about a hiker named Mostly Harmless who was found deceased in his tent last summer on the Florida Trail in Big Cypress National Preserve. The hiking community was able to immediately pinpoint who he was as a trailname after he was found but there has been no other identification information on his real name or family. I talked with the podcast host for about 20 minutes mostly giving some background information on the hiker community and have a small snippet included in the first episode, but a hiker and trail angel named Kelly Fairbanks from Crestview has more interaction in the episode as she met him and had photos of him and was the person to identify him once the drawing and description was set out into the hiker community. It appears that he may be linked to New York State. He was also on the AT in 2017.

Episode 64: 2% For Conservation With Jared Frasier of the By Land podcast. A long interview but some interesting outtakes include having hikers and other public land users add into the fees that hunters and anglers have when purchasing equipment and licenses. One of those fees talked about is a ‘backpack tax’—Googling gets you lots of links for more reading, which I need to do because I found the topic interesting. Of course there are differing opinions about the subject.

Leave No Stone via the Outside/In radio show/podcast about the trend of writing and painting on rocks and subsequently leaving them in outdoor spaces. A very interesting episode!

What’s up with you? If you haven’t commented in a while, say hello! I go through my older posts from time to time and wow, it is a big difference in comment interaction 6-7 years ago versus now! I know people read, I can tell by analytics (not who, mind you, just #s) so I know you are out there! I know I’m not the only one with this problem, many bloggers are lamenting this. Say hi!