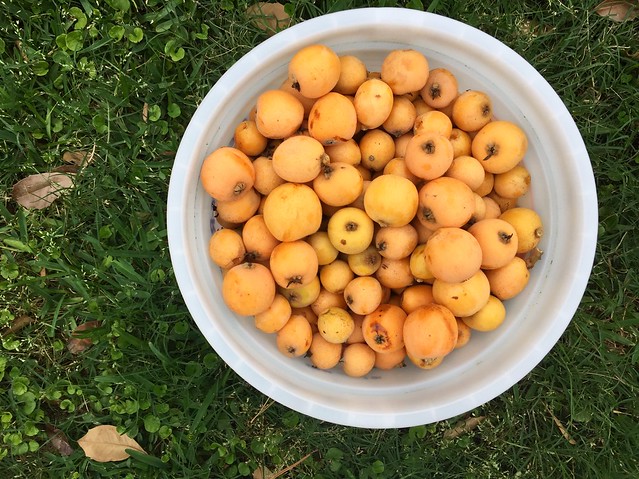 Loquats from our friend’s tree that I turned into jelly/thick syrup.

The evening sun is blaring into the office while Forest whoooshes dinosaurs and blocks around the living room. He’s supposed to be picking up his blocks so that he can watch a cartoon or three but as always playing is greater than putting up the mess you create. I imagine in about thirty minutes when he tires of playing once again I’ll be getting onto him to put his blocks up. The refrain will be “But there’s so much! I can’t do it!” to which I’ll reply “Don’t get it all out if you can’t put it up!” The funny thing is that sometimes when I pick him up from daycare he’ll be in the midst of playing and he will put away all of his toys, so I know he can do it. There’s just something about rebelling against mom and dad!

I don’t know why I hit the wall this last month or so with writing here. I had a groove and then lost it. So many different things going at once and sometimes it is best to let go of something before you just topple over. We’re having the house painted after many years of talking about it. Of course that coincided with our annual/semi-annual Big Rain Event here in Houston. Last Friday we got a taste of what we’ve been missing (purposely forgetting) this spring when a downpour of 4″ or so paired with tornado warnings came through our part of Houston. We’d gone out to lunch with coworkers and had been monitoring the weather and when we arrived back to the office it was raining heavily. Less than 20 minutes later Chris was calling all of us to the front office as well as one of our new coworkers who had parked his car in what appears to be a convenient space but just so happened to be the path where a heavy flow of water coming off the ditch and street and was pouring down the rock wall and down into the creek below. Thankfully he got out in time to move it, soaking his pants up past his ankles—another five minutes and his car might have been pushed over the wall.

Wednesday we mostly avoided the worst of the rain but other areas were flooded. It was prep for what everyone was worried about last night. Thankfully we only had some minor issues, the pond only coming up to the fire pit in the backyard and this morning it was all back into the pond. Somehow the front yard is now draining through the pipe that goes under the neighbor’s yard once again, which is great. So, we’re sloshy up front instead of swamped. Of course roads were flooded in many areas which led to closures of school districts and our office was closed today, though Chris and I did our best to work from home. I’ll be cobbling together a few more hours of work over the weekend that I didn’t get to today. More rain is predicted overnight and into tomorrow so we’ll see what kind of issues arise from that.

I finally opened up some photos from a hike we did in maybe late March, early April. There’s another day hike and a camping trip to process. It feels like this spring has been one thing after another with barely any chance to get out and hike. This weekend’s rain and the house being painted has thwarted my desires to get out to the Big Thicket to hike and botanize. Maybe naturalize is the better word as I’m not just looking or wanting to look for plants. I spotted two, no, three, interesting things in the garden this afternoon during our get-out-of-the-house moments today. One was a tiny black and white butterfly that reminded me of a tropical checkered but I think it was too small to be that. The second was a broadheaded skink that I scared up from the extra garden rocks we have piled up off to the side for another potential flower bed. And the third was an ebony jewelwing damselfly!

I guess all of this is to day, I’m here. I’m around. Maybe writing this will beget some more writing. And *crossing fingers* we can get out and do some hiking or adventuring here in about two weeks!