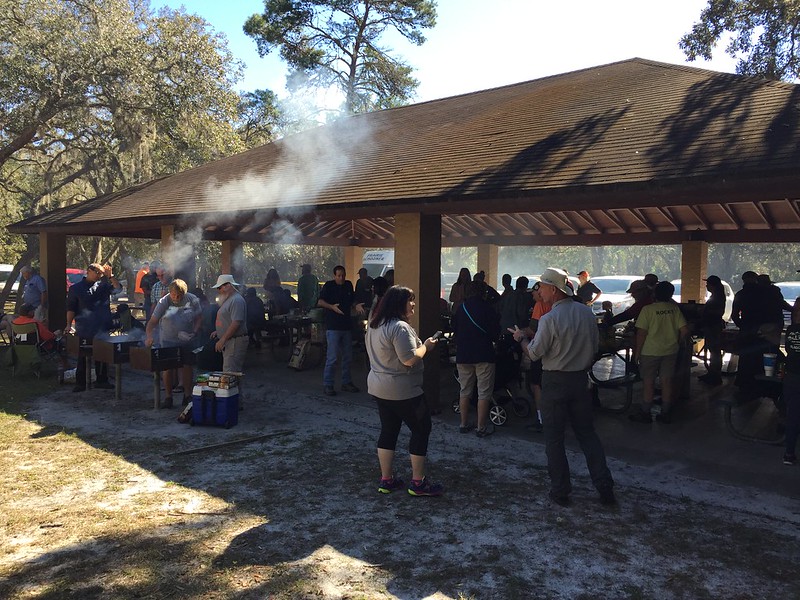 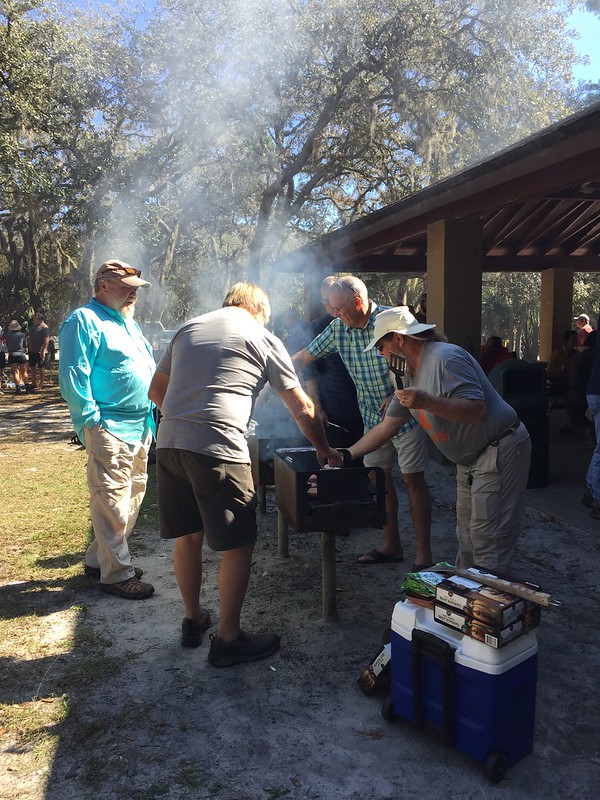 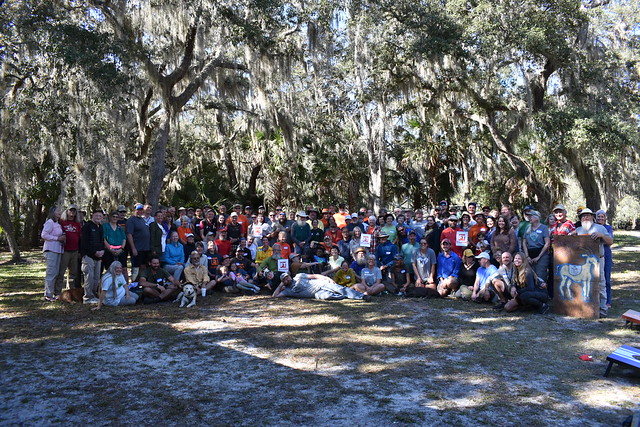 Photo from Florida Hikes via Flickr – To find me, look for the dog in the lower left corner, then the guy in the yellow shirt, and then the grey and orange FT Thru-Hike shirt just to the right of that. It was a good crowd!

Wow, what a weekend! I flew into Florida very early on Friday morning, landing at around 10:45am local time, stood in line for my rental car, and then jettisoned myself to the nearest Publix to get lunch. I’d started craving a Publix sub the night before but had been thinking about it for weeks. The particular Publix I found was very busy at the lunch hour with many workers getting their lunches, definitely busier than when I used to get my subs for work and hikes. The secret is out and has been for a while! Next I drove over to Split Oak Forest to eat my lunch and go ambling through the woods there. In the end I made a four mile loop on the northern portion of the tract and had a wonderful afternoon before I hopped on the voluminous toll-roads through Orlando to Lake Mills Park near Chuluota for the weekend’s festivities.

At Lake Mills Park current Florida trail thru-hikers were arriving as were trail angels, volunteers, and other hikers within the FT community. I met up with my friend Eleni who I had gotten to know through social media the last few years and had been the secretary of the Florida Trail Hikers Alliance and set up my tent at her site where she and her significant other Joel were set up as well as a hiker named Grits. Grits, I never got his age, but he is either in his late 70s or early 80s and was a hoot to talk to! He’s hiked the FT many times—a ‘true’ thru 3 times and then most of the trail another 4 or 5 times. He skips some of the longer road walks these days, which I don’t blame him one bit for doing.

After that it was an evening of wandering around the campsites putting names with faces and often times trying to mix together trail names, real names, and screen names all at one time. My goal for the weekend was not just to record some audio for the podcast but to also actually be involved with the community a bit since I don’t live in the state any longer. It has always been a bit tricky thinking about how to do this podcast remotely, moreso than I think other long trail podcasts have to worry about, because it is so hyper-focused into this particular trail. Showing my face, meeting people in person, and making connections was a big point of coming to this event.

I slept well that night in the tent and then the next morning things really started moving once the event began starting. It’s a celebration for Billy Goat but also a time when many hikers actually get to come together throughout the year that may not see each other the entire year otherwise. Other than Billy Goat there were two other well-known people in the hiker community who showed up: Jim Kern, founder of the Florida Trail, and Nimblewill Nomad. That was pretty spectacular! All three are in their 80s. I had talked with Jim on the first episode of the podcast so I went up and introduced myself and reminded him of who I was and we chatted for a few minutes. I asked if he wanted to talk again on the podcast but he declined due to the crowd size and some of the opinions he wanted to share and suggested we try to connect later on this year.

Later, I was able to sit down with Nimblewill Nomad, more known as Sunny these days, and talked to him for nearly 30 minutes. Earlier that morning I had been introduced to him via Sandra Friend and we chatted a little bit with a few other hikers before everyone started arriving. I only met Billy Goat briefly in the middle of the event—he was looking to get some dessert after the main photo so he was a bit distracted. Honestly, everyone was very busy the entire event, talking to new and old friends and it was incredibly hard to even think about pulling anyone away to get a 10 minute snippet of conversation recorded. But, I think I was able to capture enough to put together a few episodes this spring and I made connections to follow up with other hikers later on in the year. There were just so many people doing cool things—some folks doing what we did, making the best out of a few years off and getting out and hiking trails, and other folks who manage to incorporate long trails into their life. Young, old, folks in the middle. A smattering of everyone getting what they can out of life on the trail.

Once everyone got up on Sunday morning many of the thru-hikers were heading back to the trail. Most had been picked up by trail angels and had to get taken back to where they were on the trail, sometimes a few hundred miles south or north of Orlando. Several had timed their hike to arrive into Orlando at the right time so they walked back to the trail or got a ride to the nearest trailhead and kept on going down the trail. I had the rest of the day free until I had to be at the airport around 4:30 so I went to breakfast with Eleni and Joel, Sandra, and a new acquaintance Vera who I know has stories up her sleeve. On my way to the restaurant in Oveido I suddenly became familiar with where I was because I found the sports complex we’d stopped in at to pee after leaving the state forest and then the Mobil station around the corner that we’d had second breakfast at 10 minutes later. Boom, it was the beginning of the walk through the Orlando ‘burbs!

After breakfast Sandra and I shuttled cars to trailheads in nearby Bronson State Forest to do a four mile hike between Chuluota Wilderness and Joshua Creek. My internet friend Kate lives nearby and wanted to join/meet in person so she came along as well. It was another great hike and we had an excellent time traipsing through the trail there. This section was not routed when we thru-hiked and instead it was a road walk at that time. I ended up seeing the faded blazes on the power poles during our time shuttling cars. Ahh, memories.

After all of that I had to get back to the airport and get back to reality in Houston. And here I am, trying to digest the weekend and come back to life here at the same time. I’ll be working on editing photos and getting posts up in the coming weeks (along with Alaska photos!) so stay tuned for more detailed posts. It was a great weekend and like always, Florida felt like home.