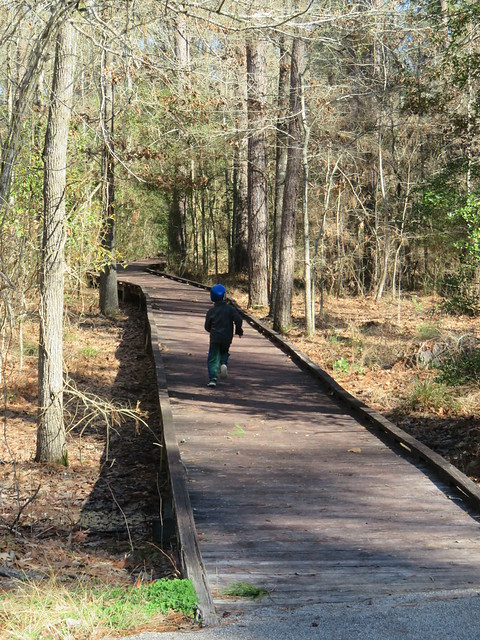 We kicked off February with a camping trip to Lake Livingston State Park. It is one of our closer camping locations and thus allows for easy access on weekends when we don’t feel like trekking across the state. 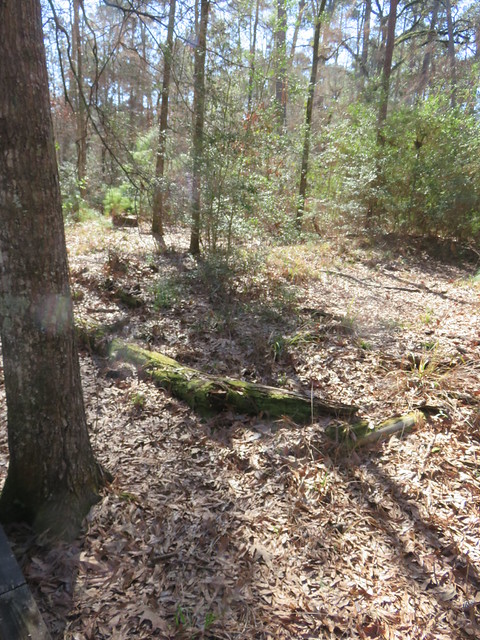 In the past we’ve tried to take off work a bit early on Friday to make it a longish weekend at the campsite. We weren’t really able to leave that early this time and so when we arrived it was nearly dark. We would end up setting up the tent in the dark as well as making dinner in the dark. This was something we really couldn’t fathom doing a few years ago with a baby and then toddler, but Forest is now big enough to follow directions and to also hang out by himself while I help Chris with getting things set up. I don’t really enjoy doing the camping set up in the dark but it is nice to know that the option is there for us now! And with the days getting longer it will be less worrisome for awhile. 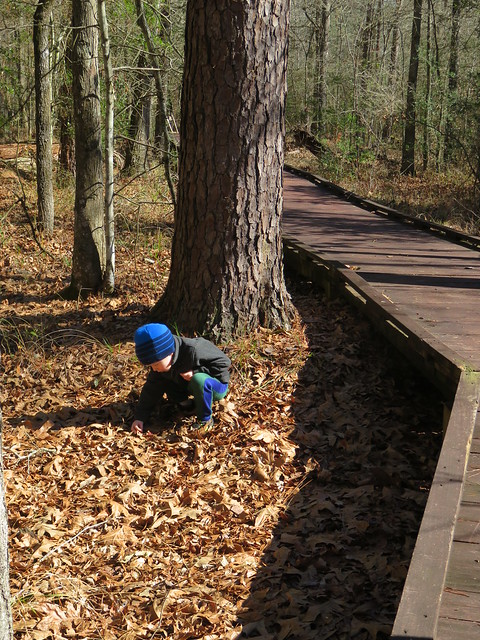 On Saturday morning we did our typical hike on the boardwalk trail, taking it slow to see what early spring ephemerals might be out. It was rather quiet and still feeling a bit like late winter. Forest found a tiny, not fully formed pinecone here and kept it before he ended up losing it sometime later that weekend. 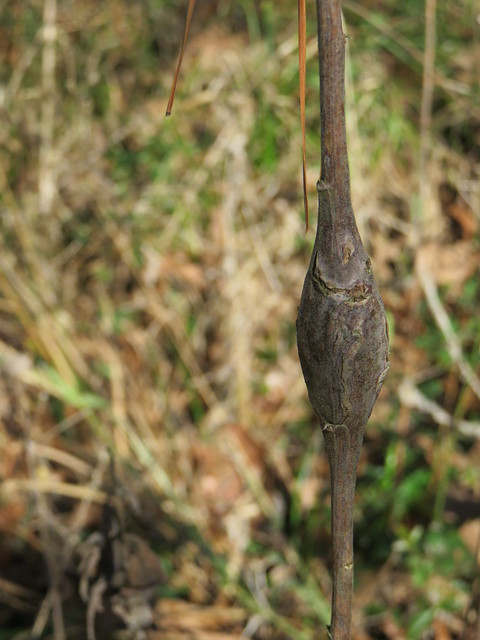 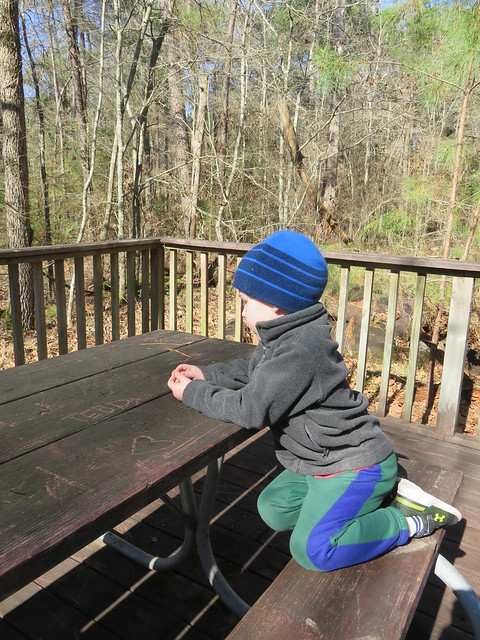 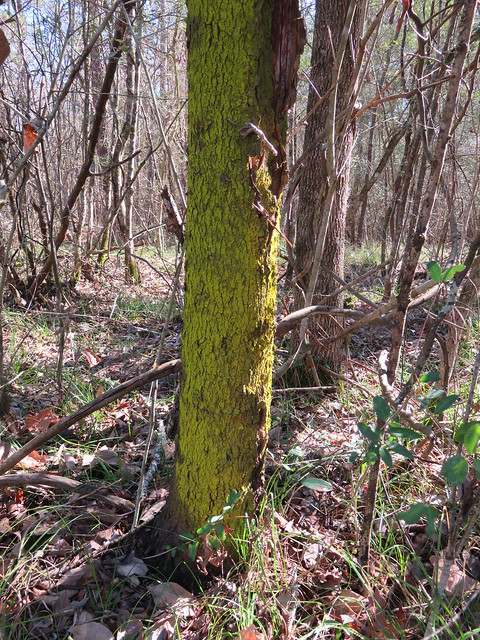 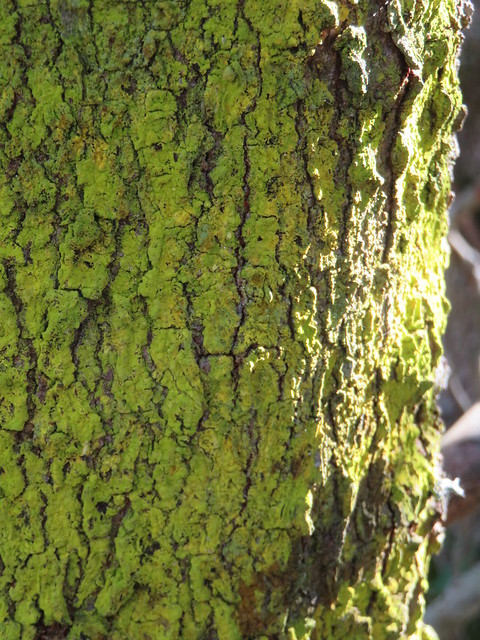 I was stopped in my tracks by this neon-yellow/green on a tree and had to take a few photos. I thought I had seen something like it before on iNaturalist and turns out it is Candleflame Lichen, Candelaria concolor. You may recognize it in smaller doses—the other photos of it on iNat show it how I’ve seen it in the past with little splotches in pieces of wood or cement, but this entire side of the tree was covered in it. 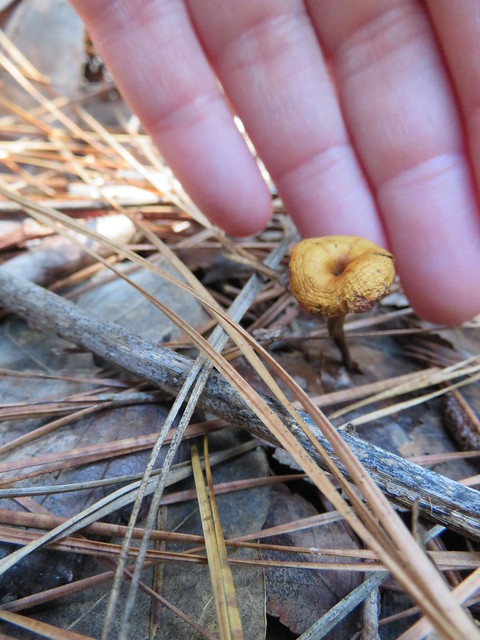 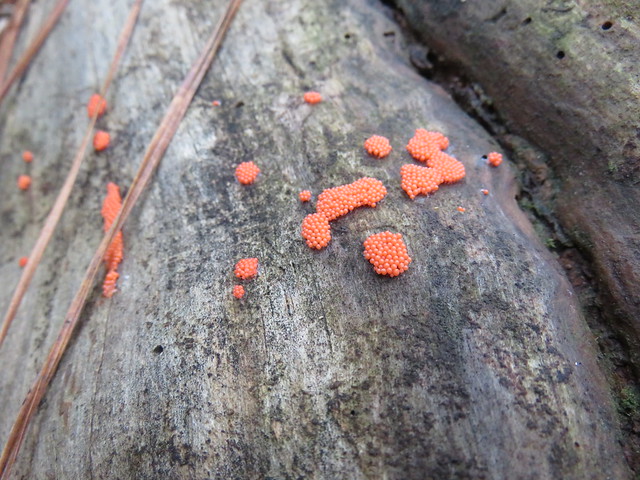 This log with these strange formations on it stopped me in my tracks. Initially they looked like eggs but I got off the boardwalk and inspected and thought they were fungi. Nope, someone on iNat identified them as a slime mold, Trichia decipiens! 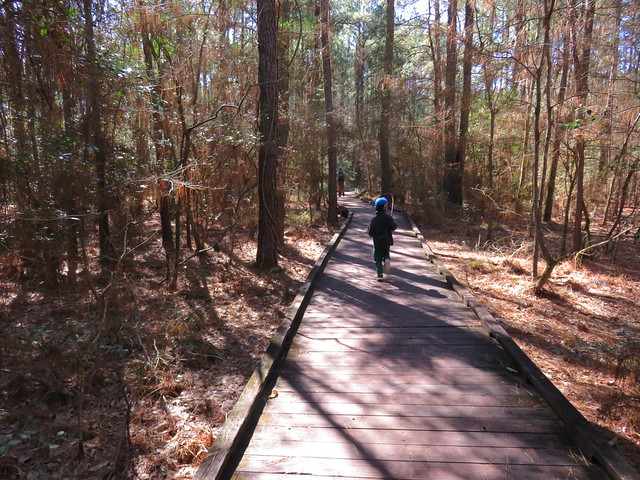 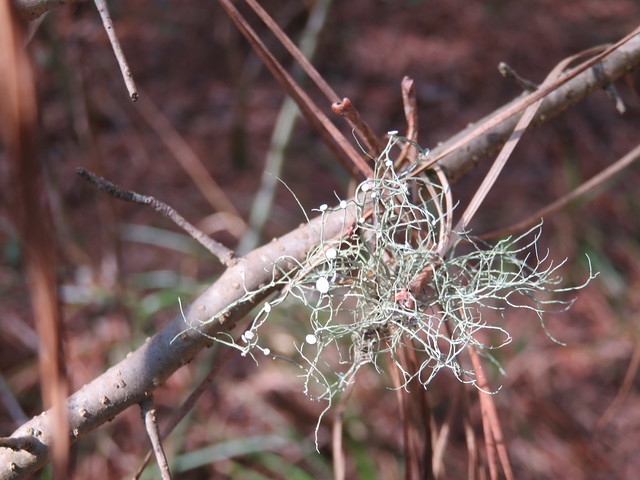 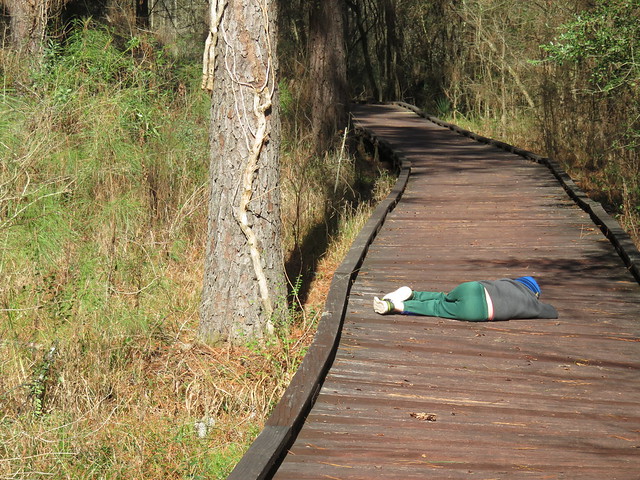 Don’t ask me—he found a sunny spot and just laid down in it. You’ll see that spot again soon. 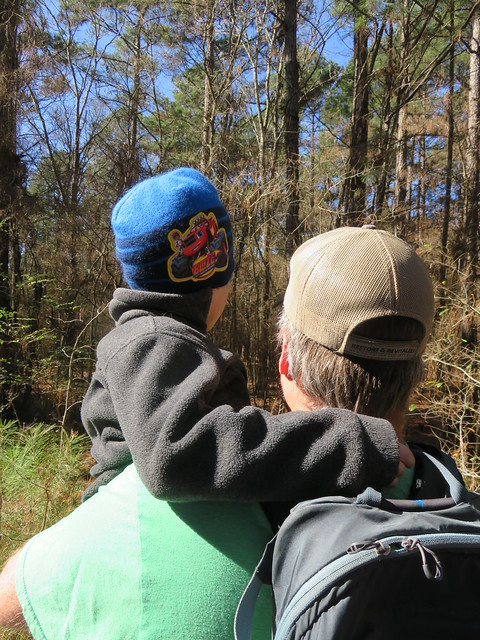 Chris found a woodpecker and was trying to show Forest where it was off in the trees. 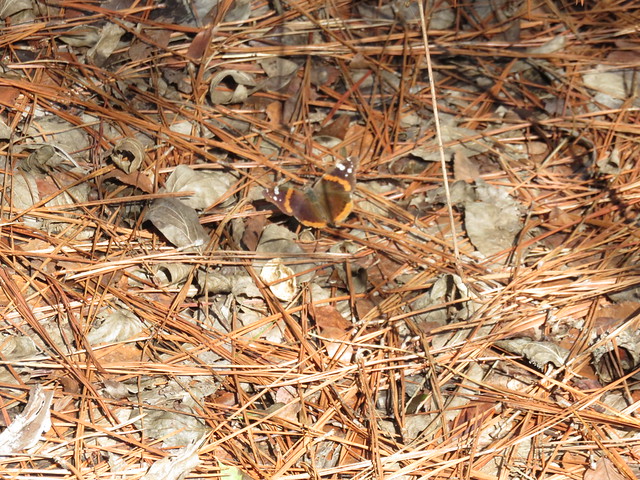 A butterfly! We spotted this red admiral flitting about. Not too much butterfly activity right now but with the warming days I think that will change soon. 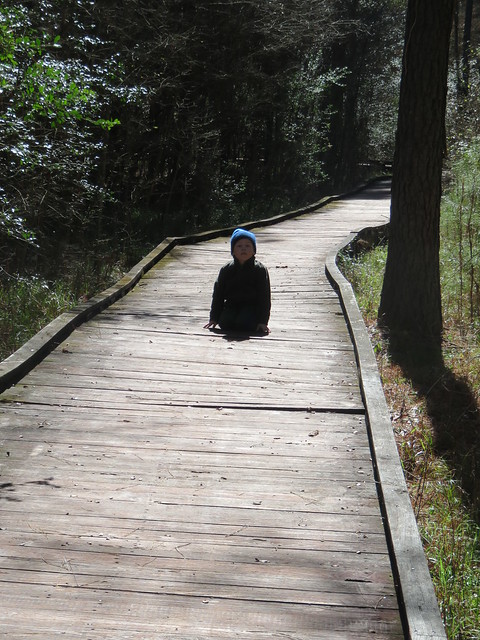 He just really loved this little spot and wanted to hang out there. 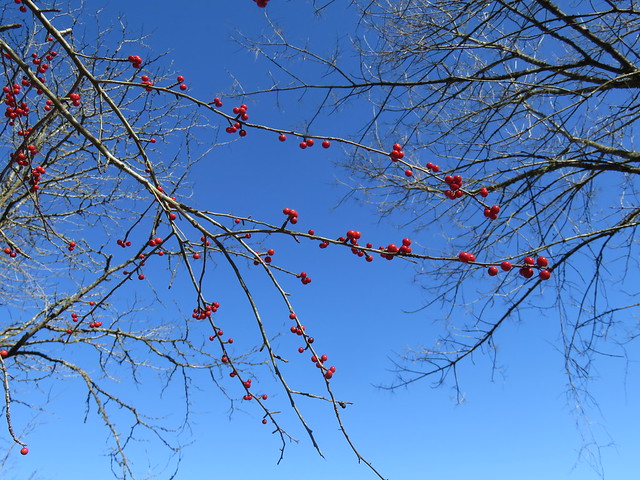 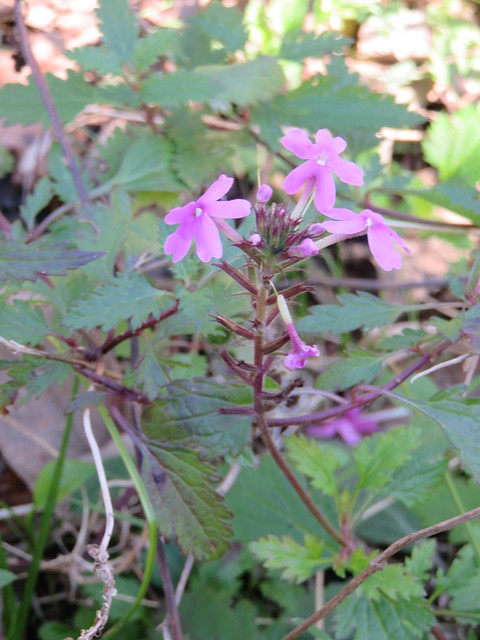 Maybe someday I will figure out the difference between phlox and mock vervain…Glandularia sp. mock vervain. 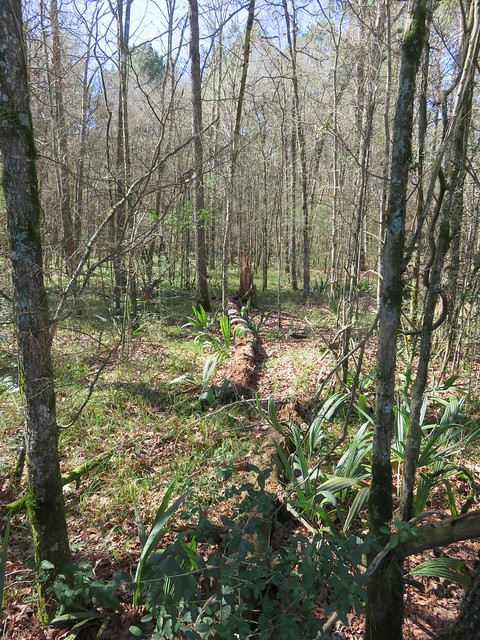 I just loved this scene with the dwarf palmettos, Sabal minor in the foreground. 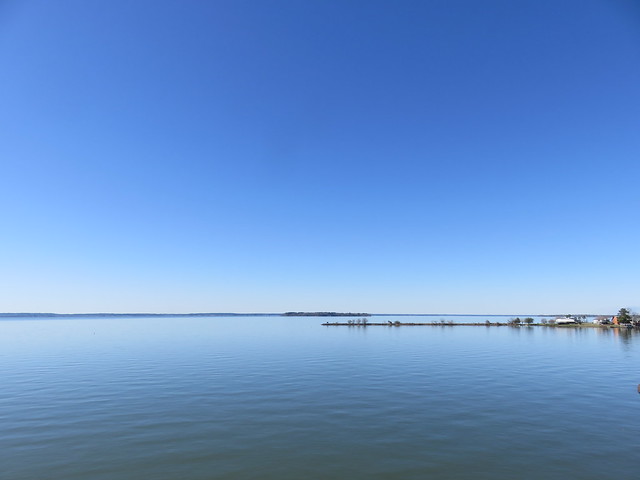 We hiked, Chris fished, Forest and I attended a honeybee talk by a ranger in the nature center/gift shop, and did more hiking, playground-ing, a bit of bike riding. We packed it in! 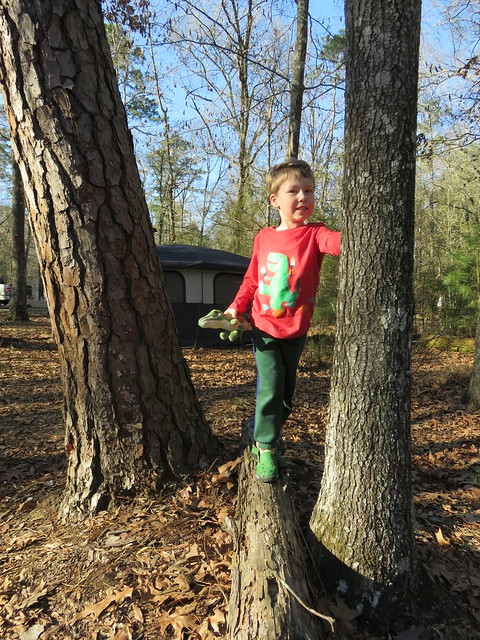 I chose the same site we had the last time we were here based on the wide play area behind the camp site. Forest really enjoyed it this time around (he was a little over 4 last time) and walked on the logs like a balance beam and there was another tree that was leaning over far enough he could ‘climb’ across it. Definitely a play spot for an adventurous 5 year old! 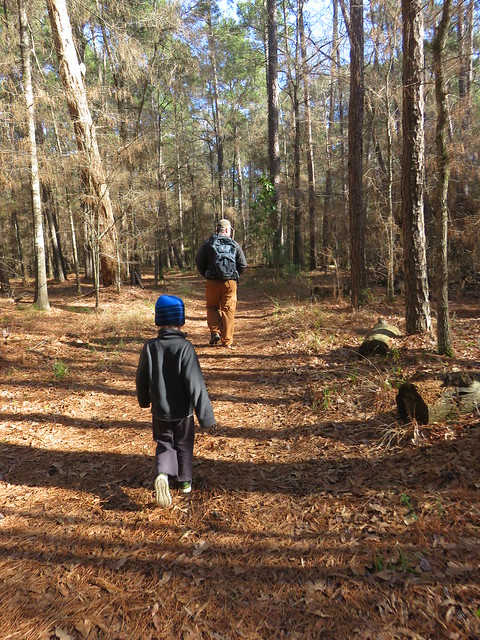 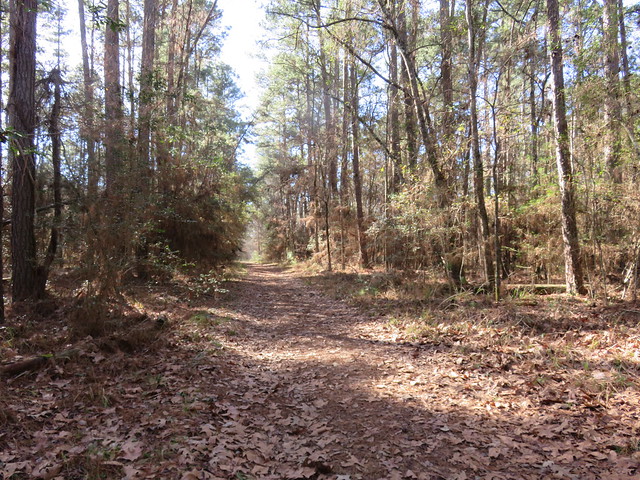 We closed out the weekend with a hike on a loop we hadn’t hiked before and then went back to camp to pack things up. Another weekend camping trip in the books!