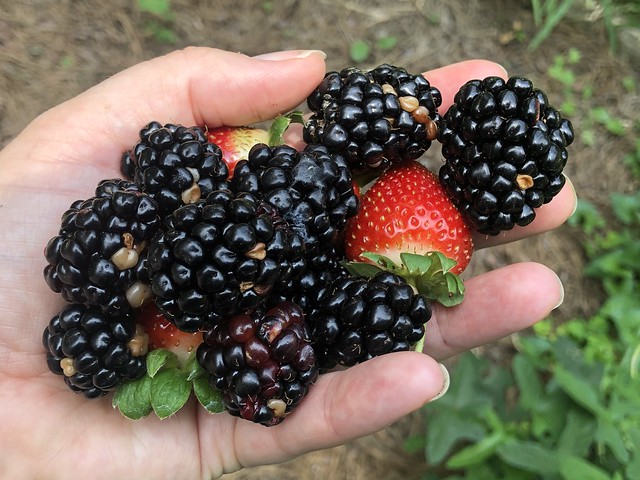 Yesterday I spent the majority of the day moving a load of mulch and doing various gardening tidying activities. I had wanted to move this particular load of mulch back in March after we moved a different load of mulch but then everything shut down and that didn’t happen. I was getting tired of weeds appearing in many of the unmulched areas over the last two months so I asked Chris to get another load for me now that things are open again. I’m only disappointed that it did not come with a couple of kolaches for breakfast from Kolache Factory as it typically did in the Before Times. Such is life these days and after a breakfast of whatever we had in the house, I got to moving mulch.

Forest helped me with his little electric car he drives around the yard. Handily, it is a John Deere brand so I shoveled some mulch into the back of his dumping bed and he moved two very small loads of mulch for me before deciding he was done moving mulch. Subsequently we had many hours left to go in the mulch moving.

Breaks were had for lunch and the SpaceX Crew Dragon launch at Cape Canaveral but by the end of the day both Forest and I were filthy with mulch. He was filthy because of course he thought playing in the truck bed was fun and during the process even had a imaginary playground situation with his friends from school. Oh, do I wish we felt comfortable enough taking him to daycare again but with Texas having a record high number of cases last week I am still unsure when that will be.

My answer for Forest to get a bit clean in the middle of the day was to drag the kiddie pool out to the edible garden and let him play in that while I continued weeding and moving the last barrow full of mulch.

In all, the gardens are looking in decent shape after this last week of weeding and mulching. I still need to work on the flower garden paths and do a few spots out in the edible garden but it all looks good for the moment!

Here’s a short tour of the garden via photos from my phone over the last couple of weeks, most before a lot of the tidying up happened.

As you see above, blackberry season is beginning now! 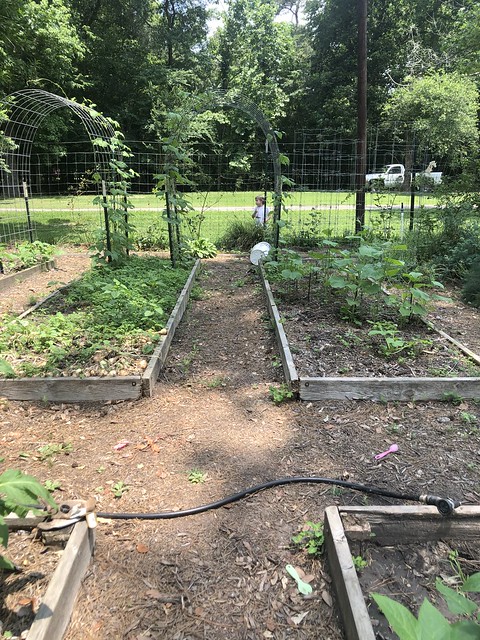 A bit has changed since I took this photo as the beans are heavily climbing the trellis now and are also putting on flowers. 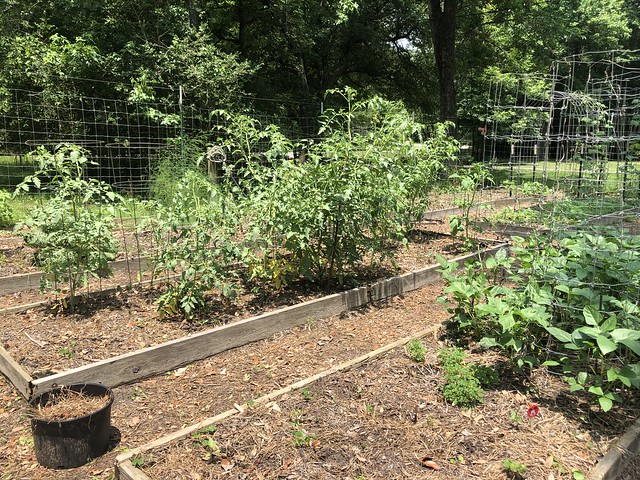 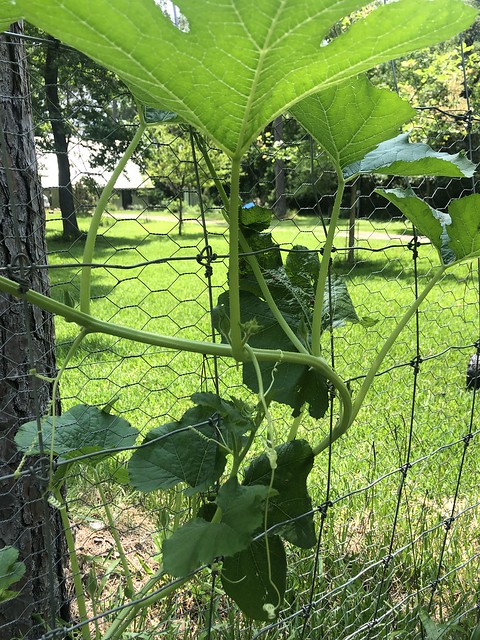 Sadly, this particular pumpkin vine had escaped the confines of the extra layer of protection from the wire mesh fencing and the deer came and chomped it in half. The vine is now recovering again but I’m trying to guide it to stay within the mesh so no more chomping occurs. 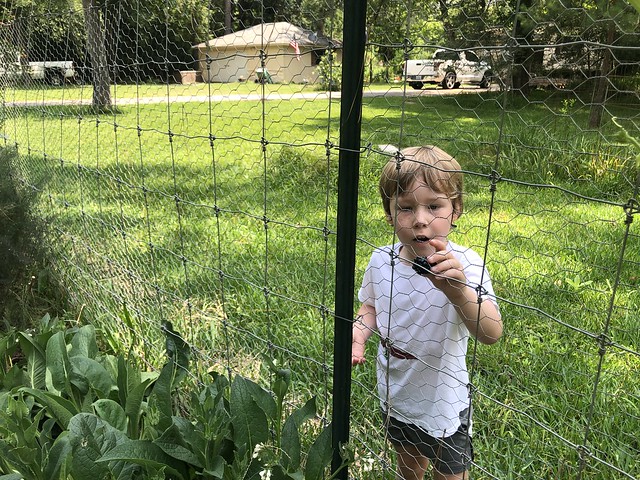 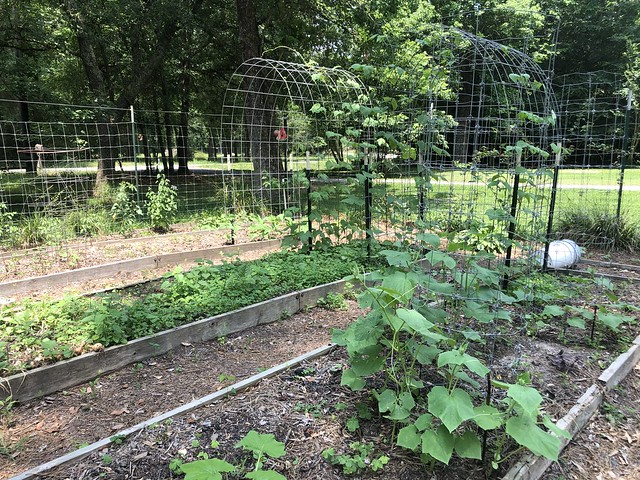 Even the cucumbers are in a much more vining stage at the moment than they were when this was taken. 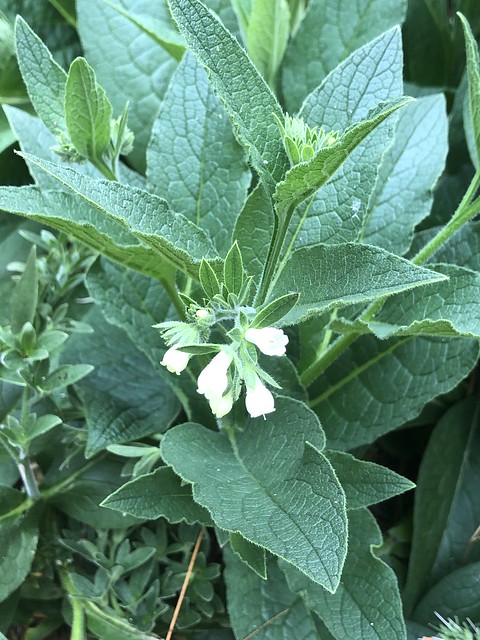 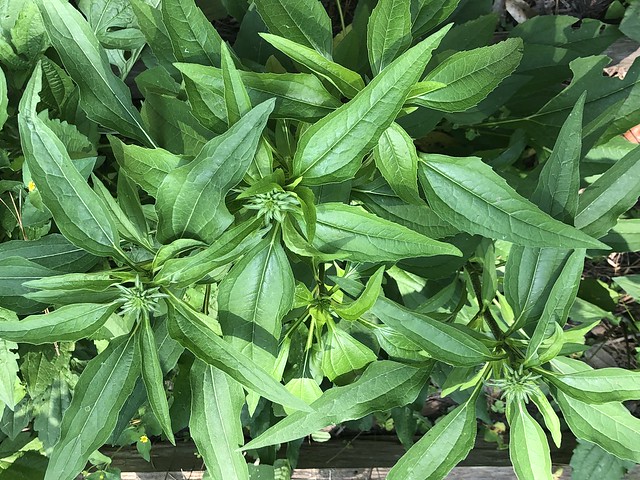 I think this is my Echinacea tennesseensis but I’ll know for sure when it blooms. Bought from a nursery at some point in the last two years. I cannot keep echinacea in the main flower garden because they are a delicacy for the deer. 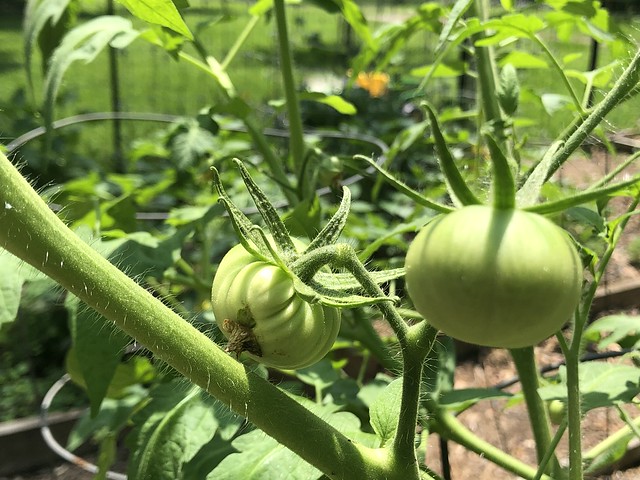 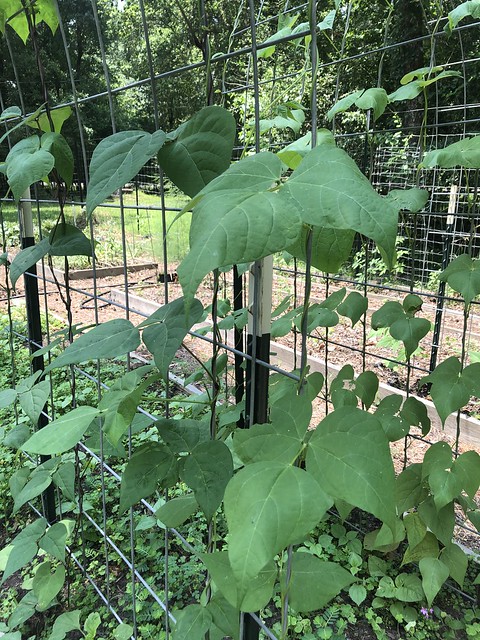 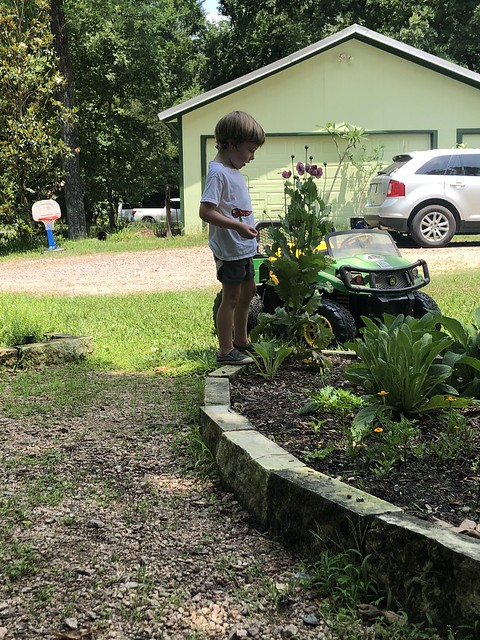 Forest having a moment with the Lauren’s Grape Poppy flowers. 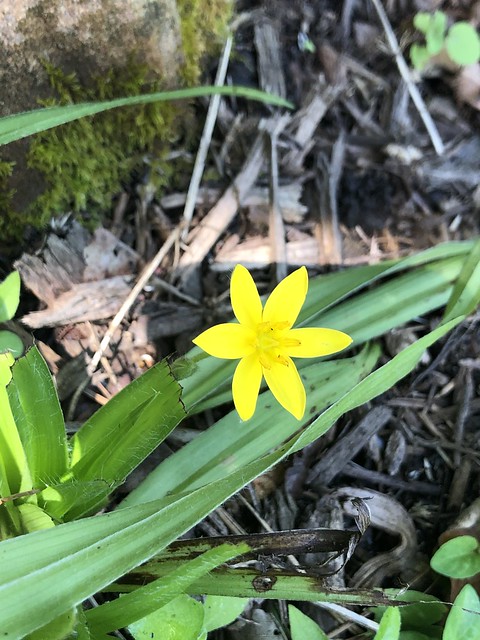 Always loving my Hypoxis hirsuta. When I bought a large pot of it last year I divided it into three clumps and they are thriving. I might have to divide one of the clumps again later this year. 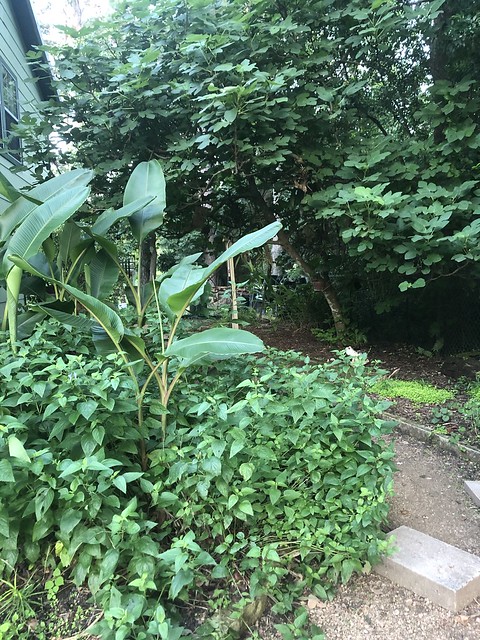 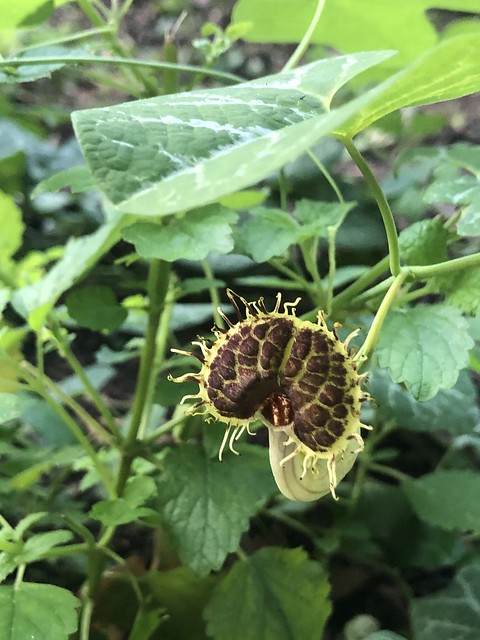 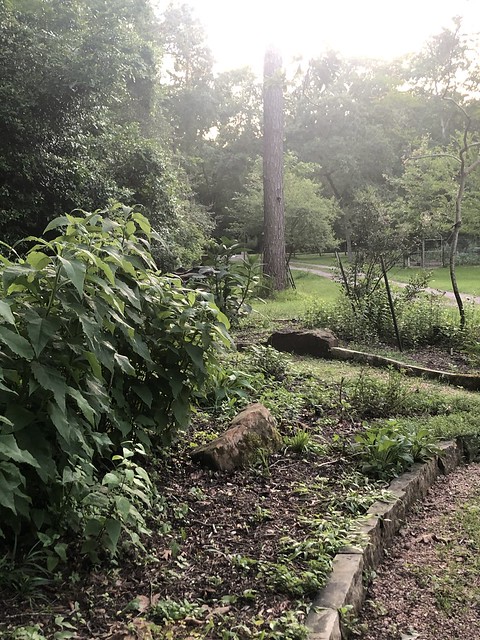 The garden looks even better now with so much more growth than in this photo from just two weeks ago. 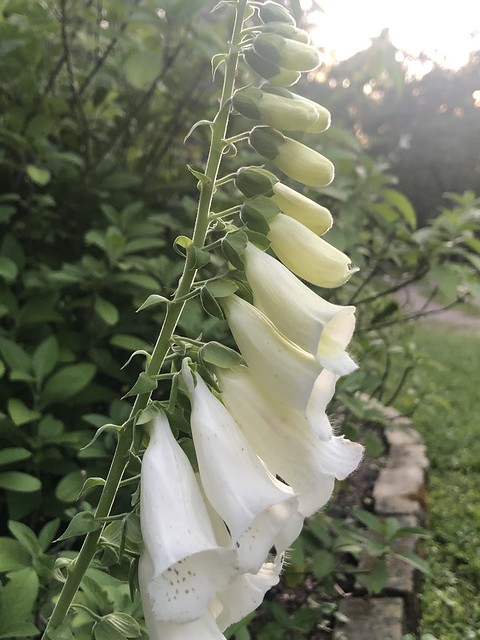 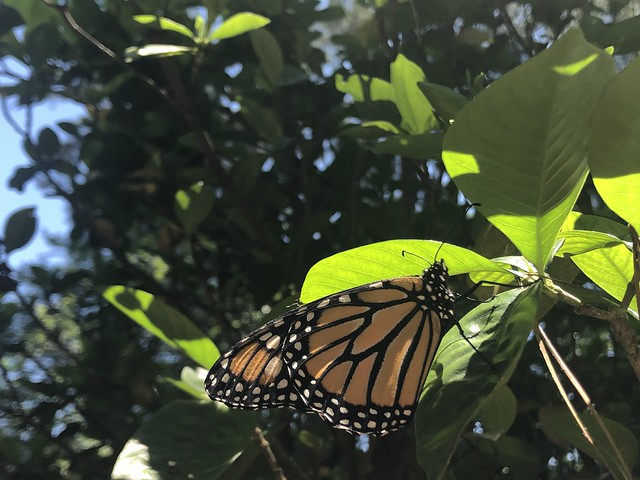 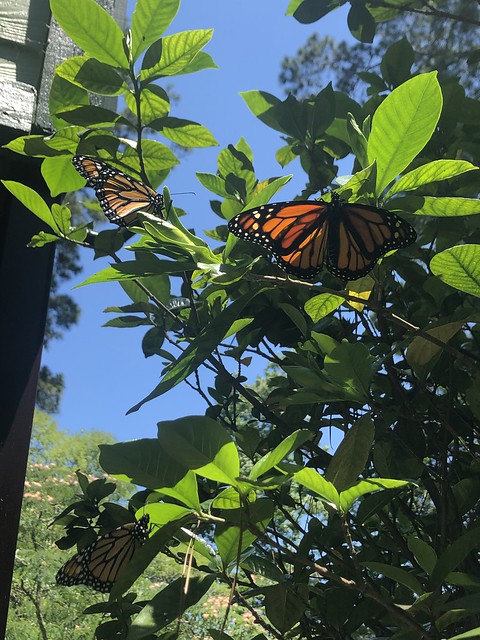 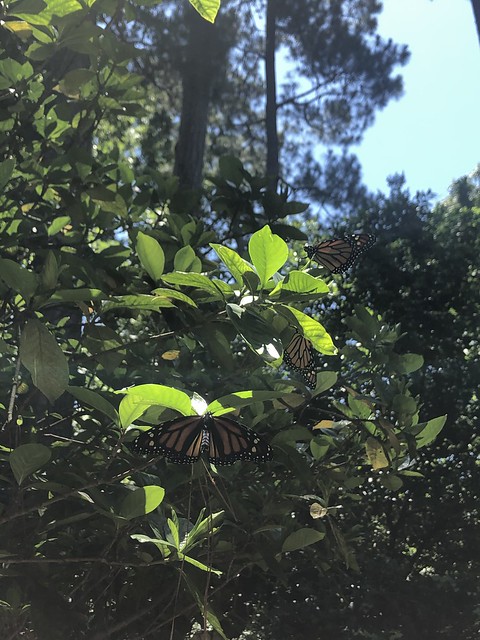 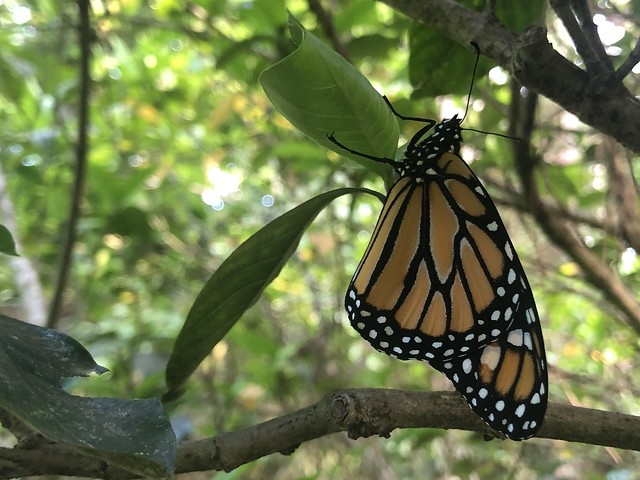 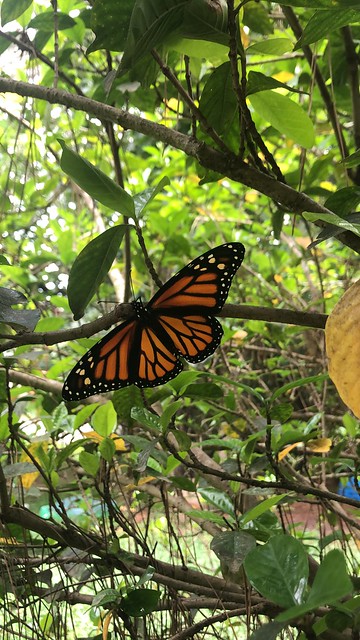 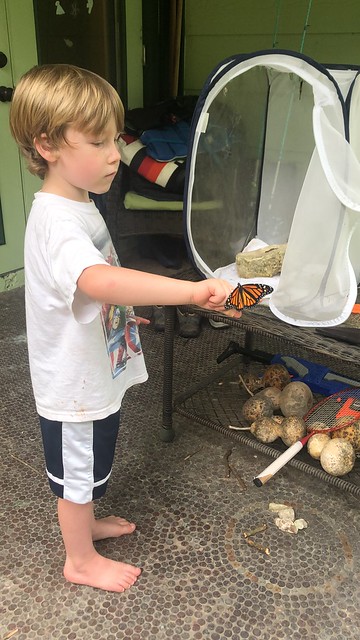 It was a very successful monarch raising season, raising 15 butterflies in all. I raised them entirely on green milkweed, Asclepias virdis from the lot around the corner (let’s pretend it didn’t get mowed last week right when seed pods were forming, monarchs were still visiting, and who knows what caterpillars and chrysalides were on plants. Later in the week a For Sale sign appeared…I knew it was coming but that doesn’t mean I wasn’t livid nor in tears…anyway…). It was a success with 100% of the butterflies making it to adult, no issues with deformed wings, malformations while trying to pupate, or tachnid fly issues. Forest had a lot of fun releasing them with me and I am very glad I decided to raise them again this spring.

We’ll see what happens for the fall this year. 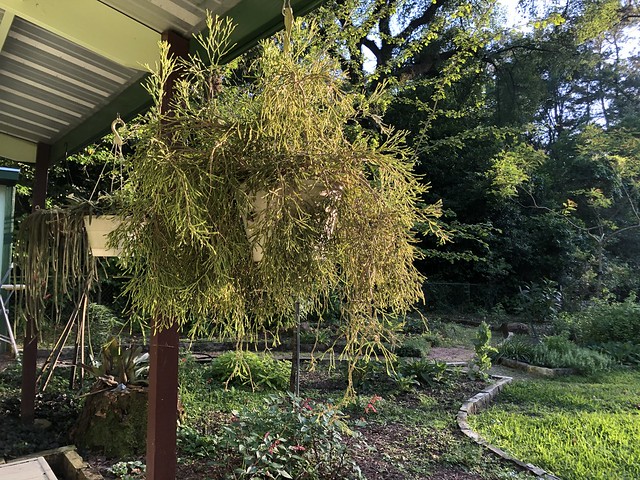 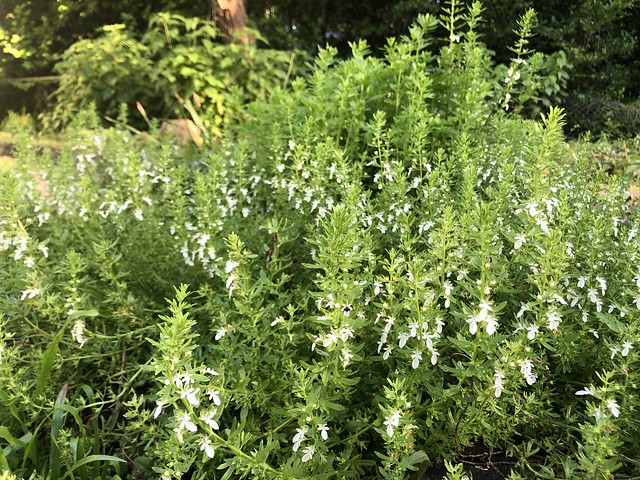 Coastal germander,Teucrium cubense—I’ve been nothing but pleased with this plant since we bought it in a tiny pot last spring. It flowers almost non-stop and has spread well. I even managed to get a cutting to root and have since placed it in another spot in the garden. A lovely native that I’m glad we added to the garden.

That’s it for now. I’m going to go around with my dSLR and take better photos over the next week or two as things really get into the summer growing season and share more soon!