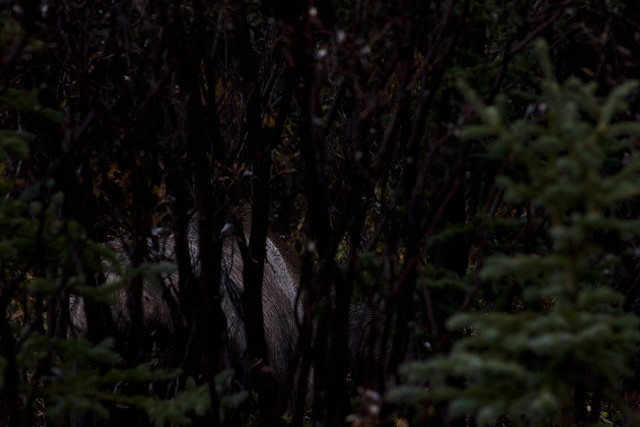 To explore Denali beyond the Savage River you need to access the park system’s bus services. There are several options designed for various experiences, including guided tours and buses that just get to a destination. They are also various lengths as some buses only go to certain locations and turn around. The longest bus ride would be to the end of the Denali park road at Kantishna, some 90 miles down the road. We opted for a transit bus which its sole goal is to deliver visitors to certain destinations along the way. You can also get out at any location along the way as off-trail hiking is encouraged within the park and is really the main way to explore.

My one beef with the bus system is the requirement for a car seat for kids under a certain age. (Looks like it is an AK issue). It would make/makes it incredibly hard to do that off trail exploring when you’ve got to keep an eye out for/lug around a car seat. We hopped onto a bus for the Eielson Visitor Center, mile 66, about a four hour ride down the road. You may wonder how such short mileage makes a four hour bus ride but these are dirt/gravel roads, fairly narrow in areas, plenty of stops along the way for wildlife, plus passing other buses, a couple of pee breaks and stops at other viewpoints—and that all makes for a long bus ride. We would have loved to have gone all the way to the end but didn’t know how Forest would handle such a long day in a bus and car seat so the Eielson stop made the most sense.

Our goal was to stay on the bus to Eielson and then decide to stop wherever we felt like on the way back. You can basically hop on any other transit bus you see on the way back as they regularly traverse the road throughout the day, as long as there’s room on board for you. Of course, bring all food and drinks with you! I know you can refill water at a couple of stops but otherwise there are no food vendors within the park that far in (that I saw—maybe at the last stop?).

And so, we set off very early for the Eielson Visitors Center! 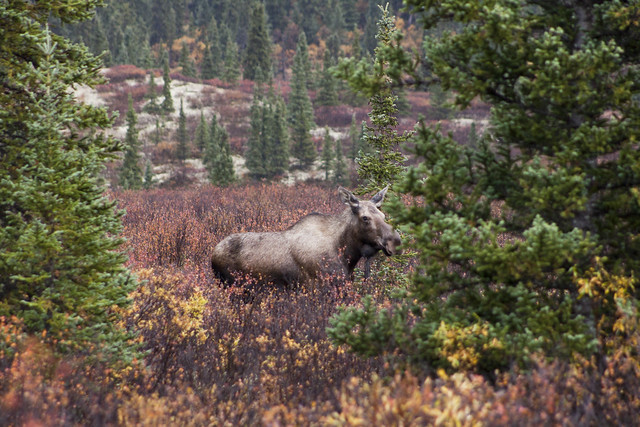 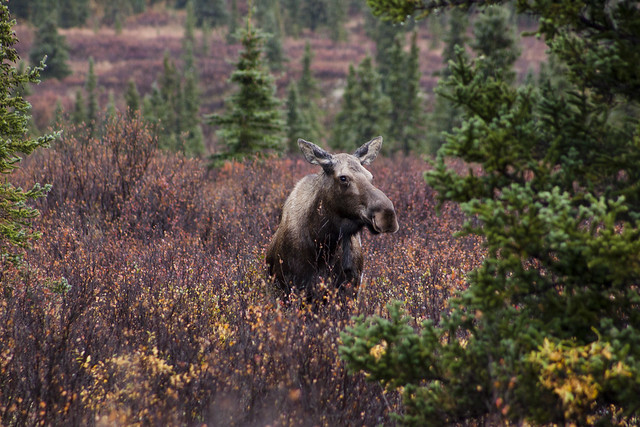 While the transit buses aren’t really guided, some of the bus drivers are more chatty about their knowledge of the park and more willing to stop and look at wildlife. That was the case with our first bus driver who did a great job of dishing out information along the way. And stopping relatively close in to the beginning of the park to get a glimpse of a couple of moose! 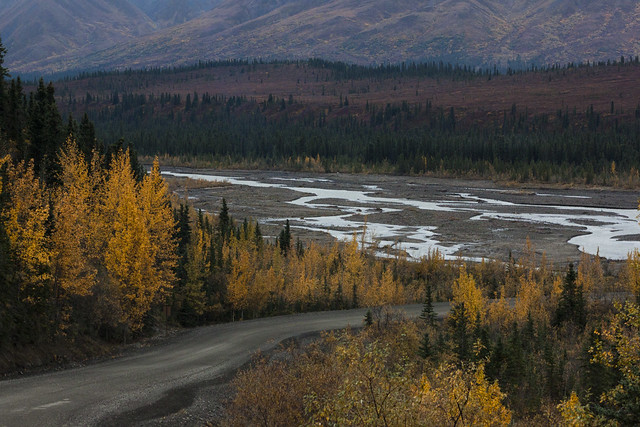 Descending towards the Teklanika River. 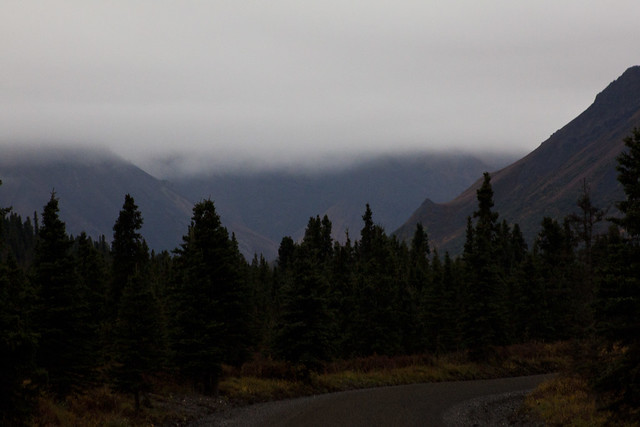 It was a very moody early autumn morning. 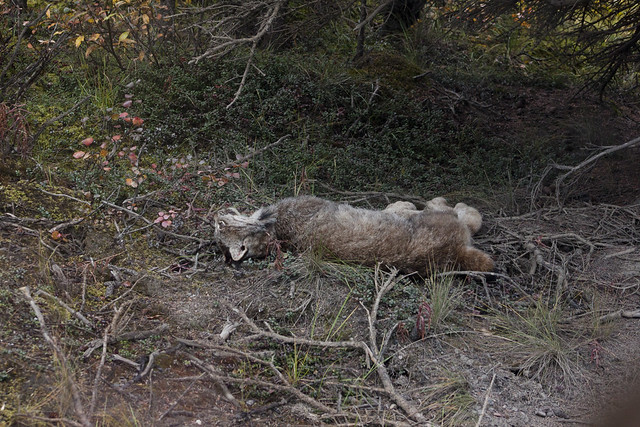 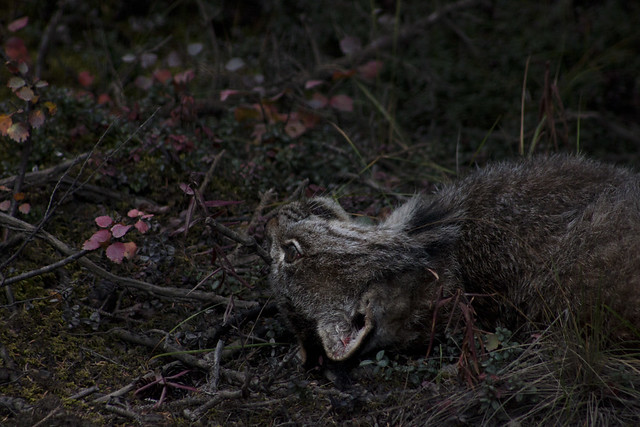 Sometime after the river another passenger noticed a dead lynx along the side of the road. The bus driver said it had not been there the day before so perhaps a bus had hit it the night before? Sadly, this was my only glimpse of a lynx on this trip, though Chris ended up getting sight of one darting across the road on the return trip closer to the park entrance. 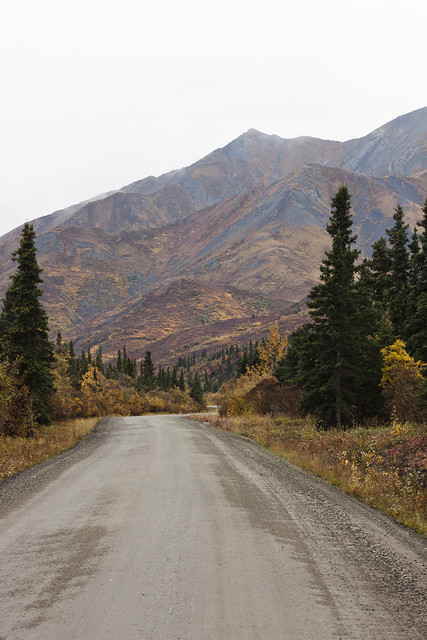 The colors are just something to soak in here! I’m really sad I won’t be experiencing this kind of fall color this year. 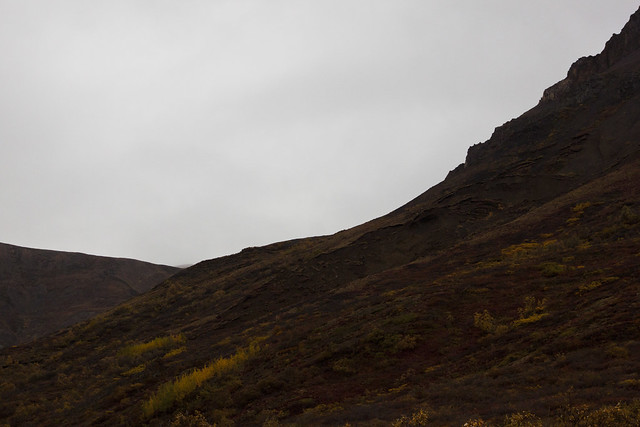 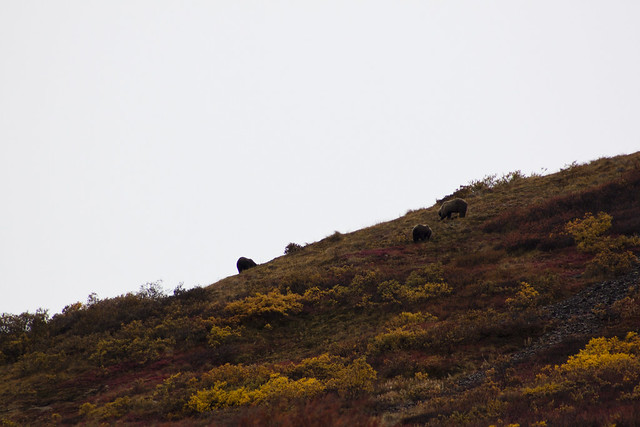 We’d been keeping our eyes open for wildlife and then, finally, brown bears! 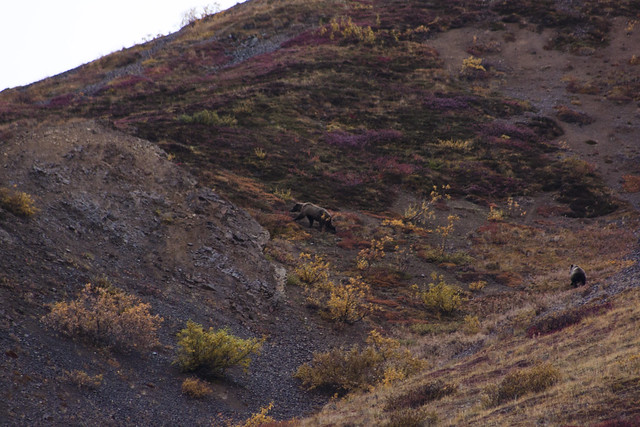 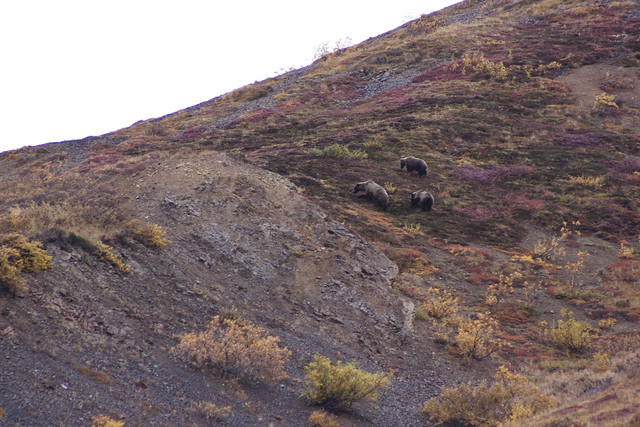 The bus slowed and stopped while all of us tourists oohed and ahhed and paparazzied them from afar. They ambled over the hill ridges and as the road curved around we were able to keep our eyes on them and watch from other angles. 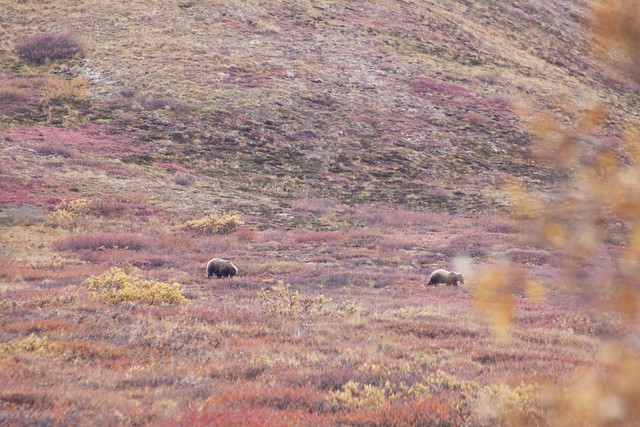 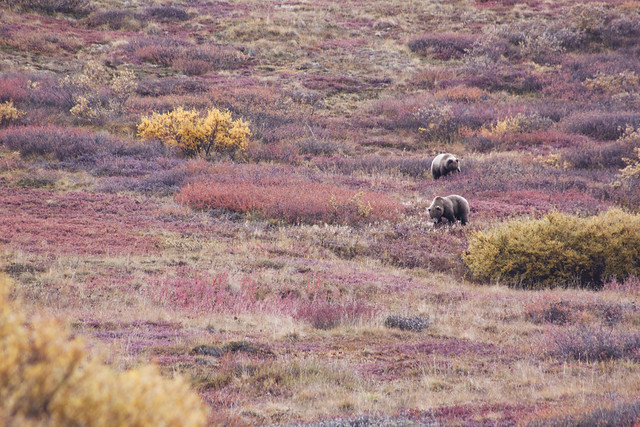 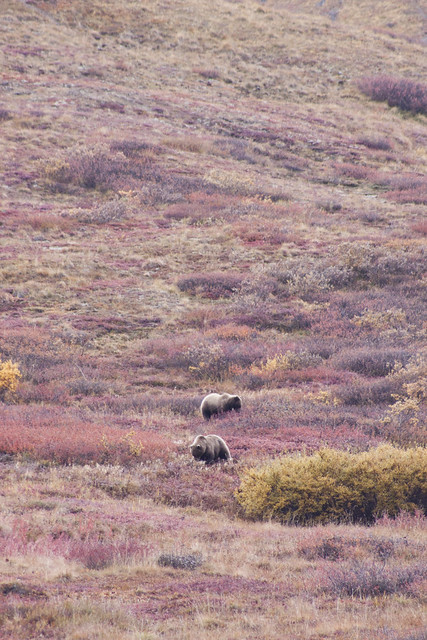 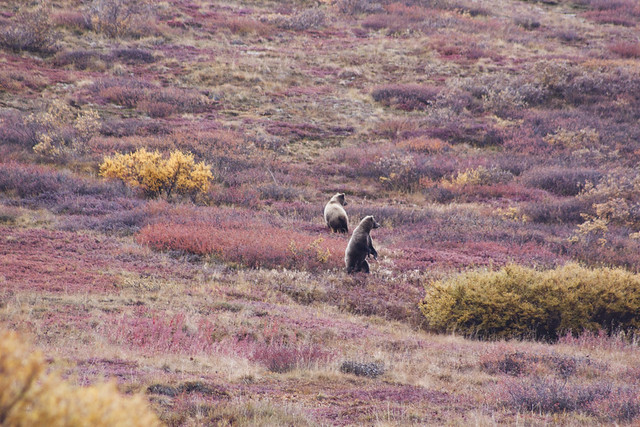 It was really a sight to behold, to watch as they dug for roots and berries to fatten up before winter set in. And the colors here, the cranberry and gold—so good! 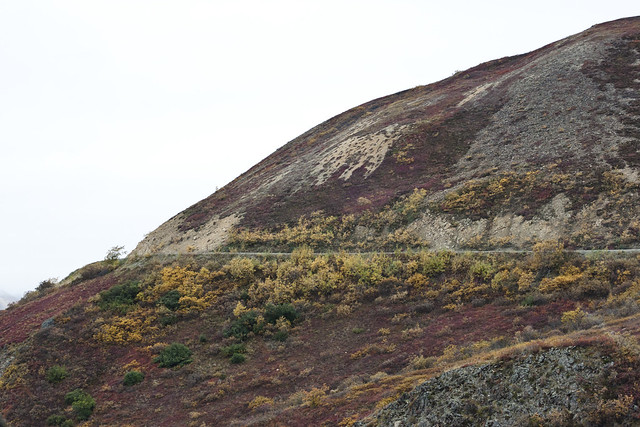 Eventually though we had to keep on down the road and around the next bend.

This will be at least a five part series! Stay tuned for more!