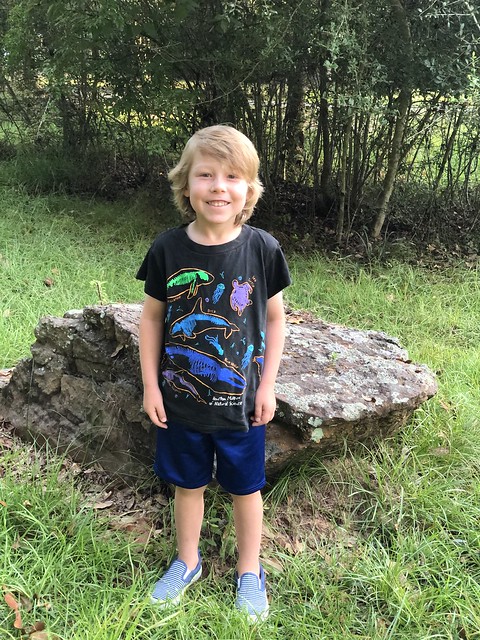 Thinking:
My first thought is—I was overly ambitious to want to try a 10 mile bike ride at 1pm during a heat advisory day (I’m drafting this on Saturday)! *Laughs in Texas in August* I cut it short to 5 miles and hope to do the other 5 this evening. Tomorrow (or today when this posts) I’ll go earlier.

My second thought is, Hurricane Laura delivered us barely any rain from a far outer rain band on Wednesday afternoon and that was that. The shift into Cameron, Louisiana really put most of the Houston area out of the range of anything and other than some storm surge in Galveston it was also unscathed. Even Beaumont, Port Arthur, Orange, and Sabine Pass managed to stay on the left side of the storm and thus escaped the dramatic damage they were expecting. During the summer of 2000 I spent some time along the area of the Louisiana coast that the storm hit during a sea turtle tagging internship in college. We worked out of Sabine Pass, Cameron, and Grand Chenier (Mermentau Pass) so I am familiar with these areas. I haven’t been back since but I spend so much time looking at aerial imagery in Louisiana for work that I often feel as if I’ve been there a million times.

So, with no rain means our drought conditions persist. And extreme heat—welcome to August in Texas.

School started for Forest back on the 12th. I went the Monday before and waited in the longest parent pick-up line ever and got my taste of that awfulness to get Forest’s tablet for online learning and a packet of school work. That mostly consists of coloring sheets, writing pages, and other materials. We’ve since had to go back once a week to pick up work because Forest isn’t attending the once a week face to face days they are doing for certain grades. This will end after Labor Day when everyone will go back at once, at least those who don’t want to do online learning. And we are so far committed to online learning. A few thoughts on that.

First, we are both still conflicted about this, just as I think many other parents are. It kind of broke my heart on that first face to face day when his teacher shared photos on the parent/teacher messaging system of the kids in the class and a few of them on the playground. I wished Forest was getting to go there. That said, as we hear more and more from various education systems throughout the country of Covid cases it helps me realizes we are doing the right thing. That doesn’t stop me from thinking that maybe if there aren’t any cases after the first 9 weeks we can switch him in. I know better in thinking this will all be great and we can send him but I still hope.

The second is that the online learning is kind of a pain in the butt. We got the tablet for him and Chris had to set it all up completely. And then of course log in issues that first week but I think the kinks are mostly worked out, though links to YouTube still don’t work properly and I have to pull them up on my phone for him to watch. So, on the face to face days the teacher isn’t zooming with us. We get our lessons for the day and can do them at our own pace. So far that has meant I’ve been with Forest on those days so I’ve been trying to get everything done in the morning so I can work in the afternoon and while he does some of the lessons. I actually like this set up much better as I feel as if even what is done with the teacher is kinda not great either—she’s on the screen and facilitates some things like when they do a color or letter show and tell (bring something from the around the house, talk about it, she draws it on a marker board at school) but most of the time she’s on the screen and switches to a video about the alphabet or coloring, or talking about science or something like that. And it takes a million times longer because you’ve got 12 kids all trying to talk and be interested in the lesson. Lots of “mute yourself” and “unmute yourself”—you as a parent have to be attentive because 5-6 year olds haven’t quite grasped that yet. So there goes any kind of uninterrupted working while in he’s doing school. Luckily we only zoom between 2-3 times a day, maybe we’ve done 4 once??? But they aren’t terribly long either, 30-45 minutes. I can’t imagine those grade levels that have multiple teachers and lots of zooming like my niece is going through right now as a middle schooler.

It’s a mess but we’re making it work. That’s the simplest thing I can say to all of that.

Gardening:
I haven’t shifted my thoughts to fall gardening yet. Still too hot and dry, but maybe in mid-September I’ll begin thinking about that.

Loving:
+The shifting light
+Finding our first saddleback caterpillars in the garden!

Reading:
I’ve read a few books lately:
+Hiding in Plain Sight by Sarah Kendzior about the rise of the current president and the people around him. Sarah has been banging the drums about authoritarianism since before 2016 and is a scholar of authoritarians so she’s not talking about of the side of her mouth. It’s good, I highly recommend. We’re in for it if he wins again.
+The Daughter’s of Erietown by Connie Schultz. This is a fiction book about life in small town Ohio in the 1950s-1970s, about going with the status-quo, teenage pregnancy, and breaking out of bad patterns. Really great and easy read. Connie is an acclaimed writer, Pulitzer Prize winner, and the wife of senator Sherrod Brown.
+The Last Flight by Julie Clark. Another easy fiction ready about two women who trade places in life, each running from the bad situations they are in. A bit of a thriller!

I’m currently reading Writers and Lovers by Lily King and The Future Earth by Eric Holthaus about climate change.

I’m still trying to read Cross Creek but it is so racist that it is really hard to handle. Even if you try to put it into context of the time it is pretty distasteful. I’m honestly not sure I will (or want to) finish it. 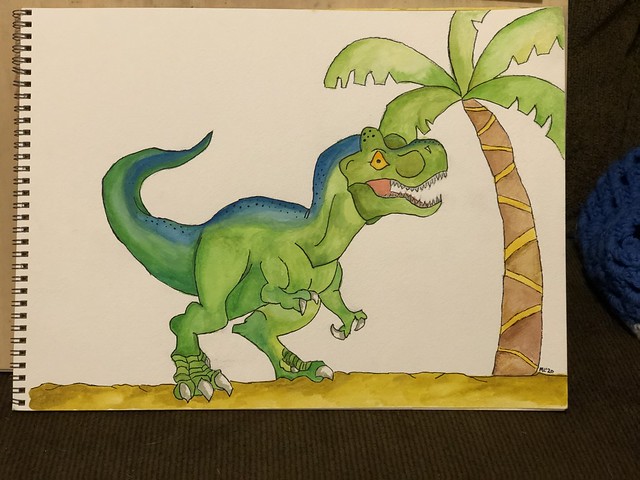 I painted this for Forest for his birthday!

I finished another painting in July but haven’t done a whole lot recently.

Watching & Listening:
Listening—podcast listening is sporadic. I really liked this episode of Outside/In about The Darién Gap, the roadless rainforest area between Panama and Colombia.

I’m rewatching Alias because nothing sounded good on any streaming service. Might as well stick with what I know! It’s been about 8 years since I’ve done a complete rewatch so it has been fun to see how it holds up now that it is coming up on 20 years old.

Looking Forward:
Forest turns 6 on Thursday!!! WHAT???!!! The kid continues to amaze me every day and I can’t believe he’s mine!

We made some camping reservations for fall but I’m unsure of how that will work. I’m a bit squicked to think about using public bathrooms.

And I would love to figure out how to see our family soon, too.