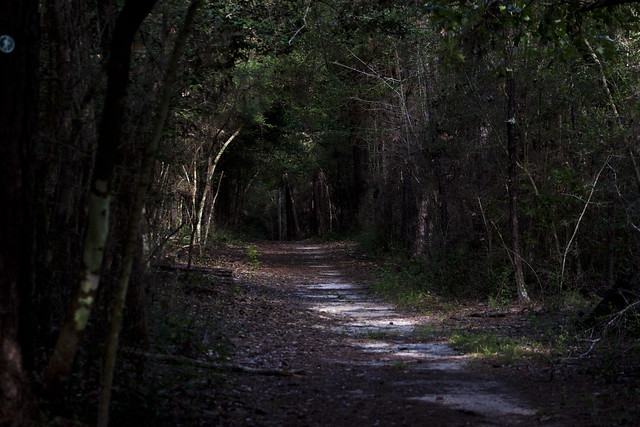 As I continue to see how crowded so many western outdoor spaces have gotten this summer with everyone seeking outdoor places to go, I’ve been glad that we live in area that sees less crowds. In general so many of the southern and eastern forests are less trekked than popular haunts out west or in New England. And summer really changes that up because who wants to walk in humid, moist forests when temperatures are in the 90s and 100s? Not too many, that is for sure.

Our second trip to the Big Thicket had us traipsing a bit past the pitcher plant bog and off into an exploration of a cypress-tupelo swamp. We arrived early and thus no one at the boardwalk as they had been the previous time we went in May. Just the humidity and us on the trails. 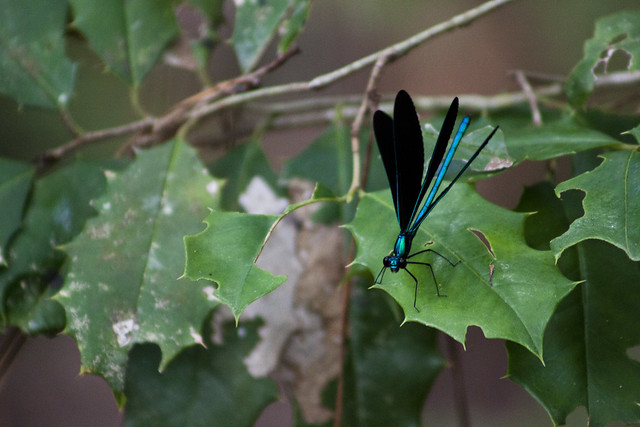 Ebony Jewelwing, Calopteryx maculata, greeting us on our way in. Our friend was still there on our way out. 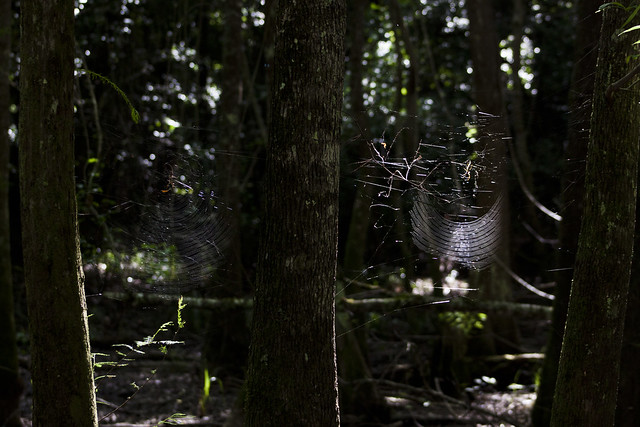 The trail intersected the slough and it was dry if a bit muddy in places along the way. I’ll never not be enamored with the sunlit glow of a spiderweb. 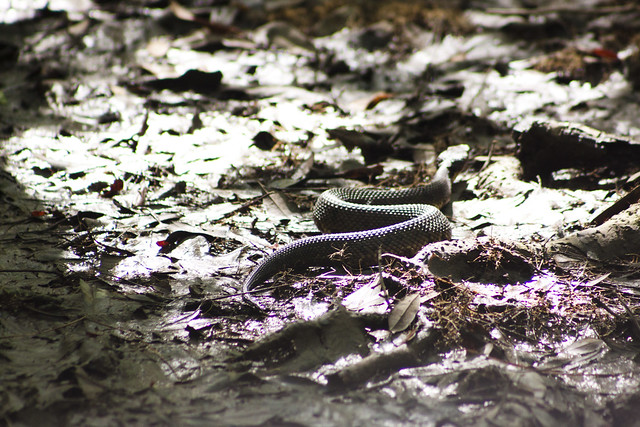 As we hiked, we warned Forest of the potential to run into a snake and he was the one who ended up finding our first and only snake, a water moccasin. We’d disturbed its sunning spot and it meandered over to the other side of the slough, far enough to be way from the pesky humans who had invaded its territory. 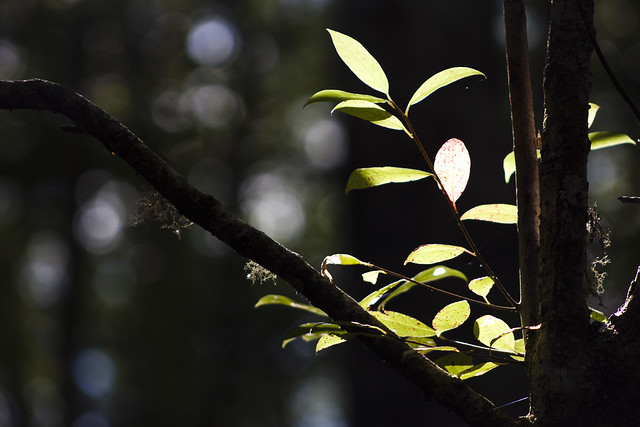 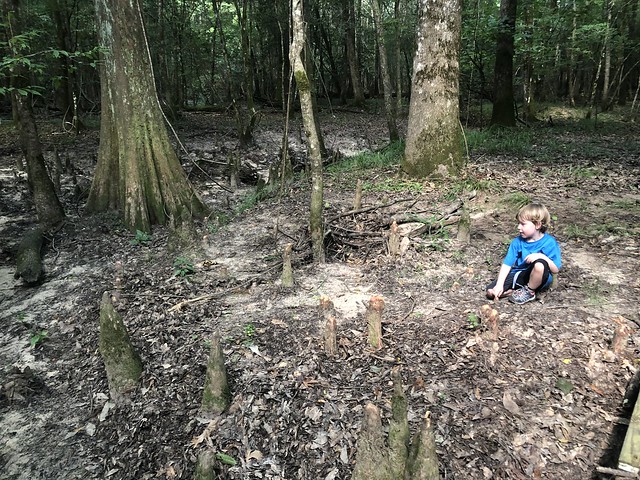 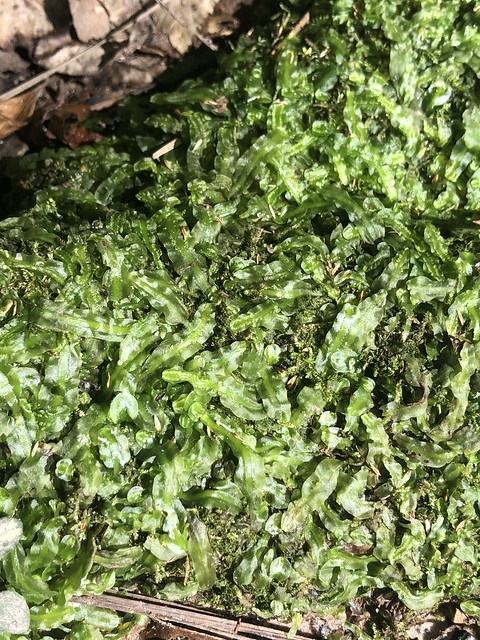 Veilwort, Pallavicinia lyellii
It is really exciting when I find veilwort out on our hikes. I’ve only come across it a few times but it is increasingly interesting to me. It is a bryophyte, part of the group of mosses. I just started reading Gathering Moss by Robin Wall Kimmerer and only a few chapters in and I am very hooked. I know very little about mosses so I hope this opens the doors a bit to my veilwort friends. 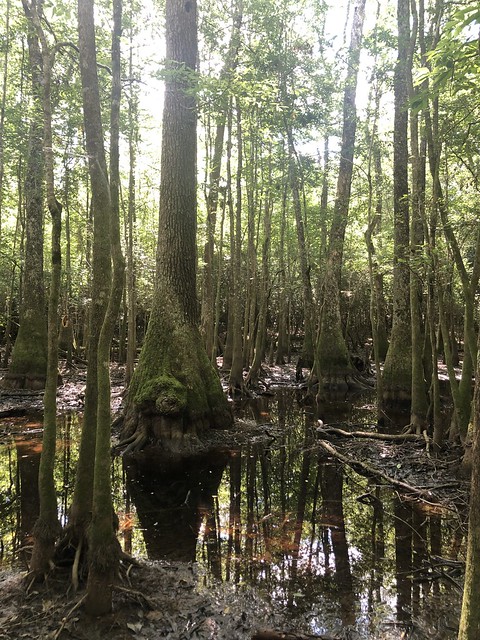 The cypress and tupelo trees in this slough weren’t enormous but there were some sizable specimens along the way. It just felt nice to be walking in somewhat familiar territory, a swamp. I will forever miss finding epiphytic orchids and bromeliads like I would in Florida but it just means I have to look harder to find the interesting tidbits along the way. 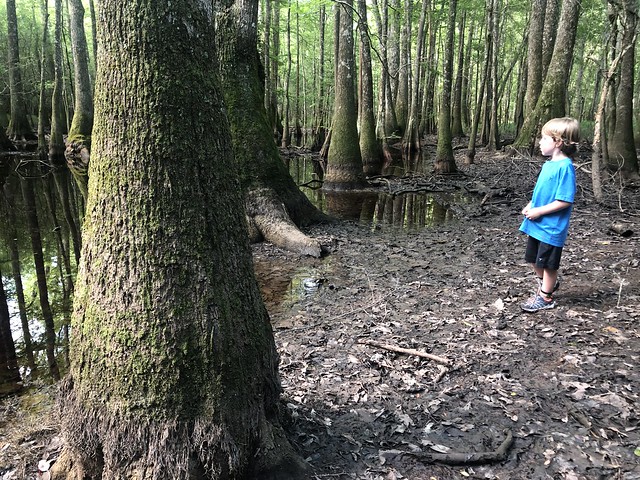 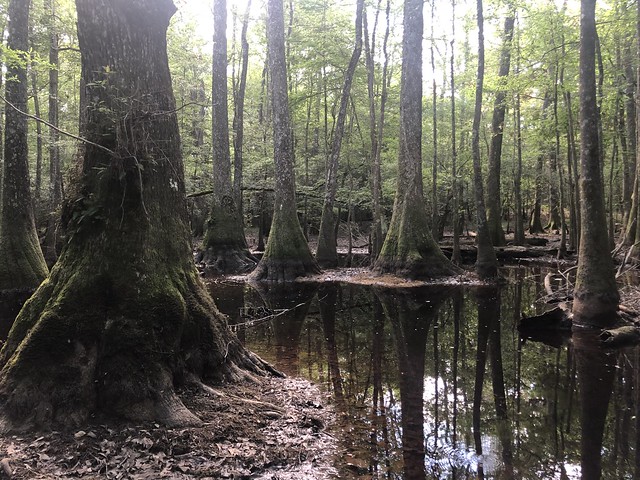 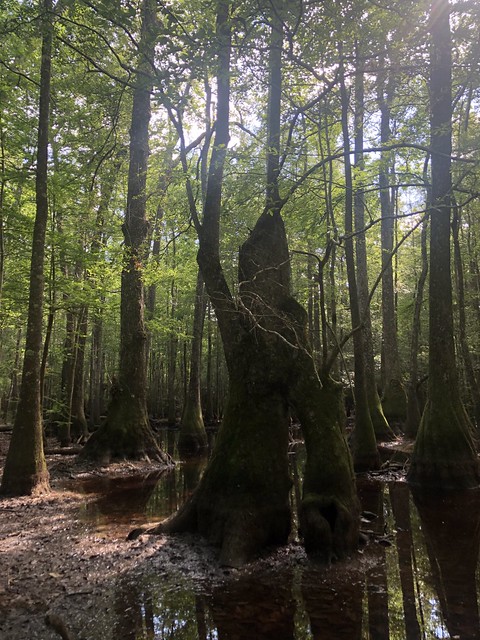 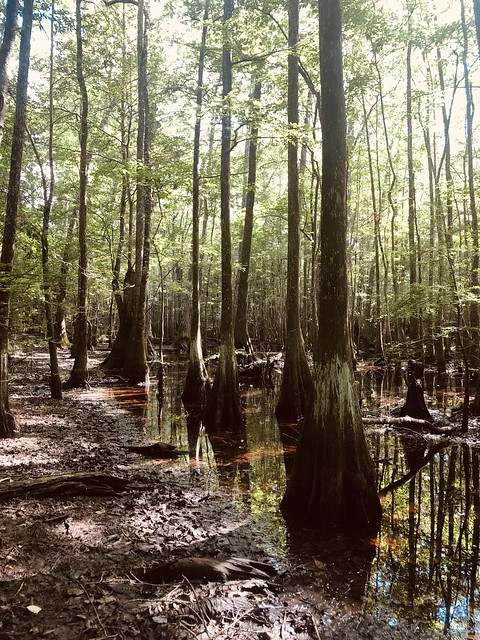 I had my long lens on my camera so I decided to play around with the settings on my phone to get some different colorations of the landscape in the swamp. 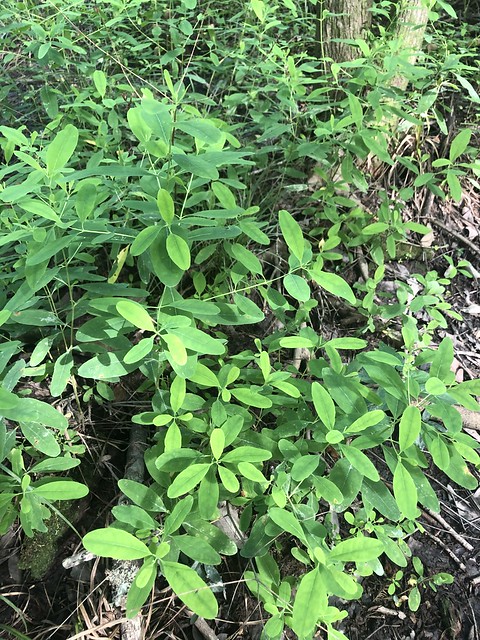 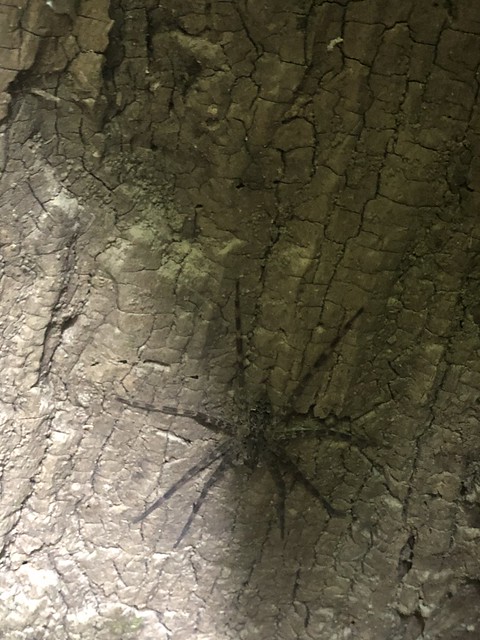 Another find that reminded us of south Florida, a Dolomedes sp. fishing spider! We decided to poke into one of the tupleo trees with an open buttress and found the spider waiting for unsuspecting prey. 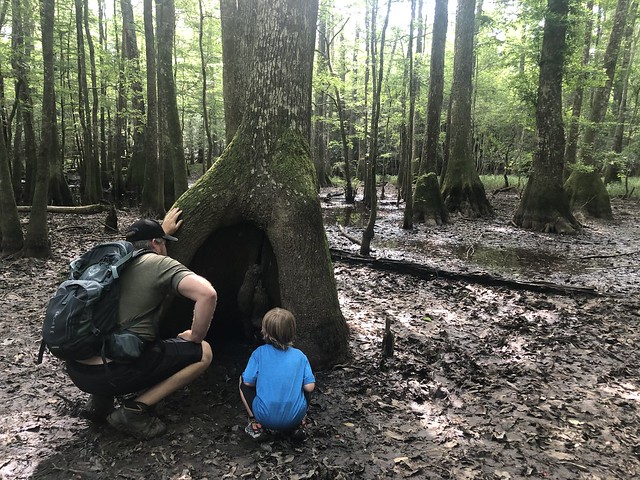 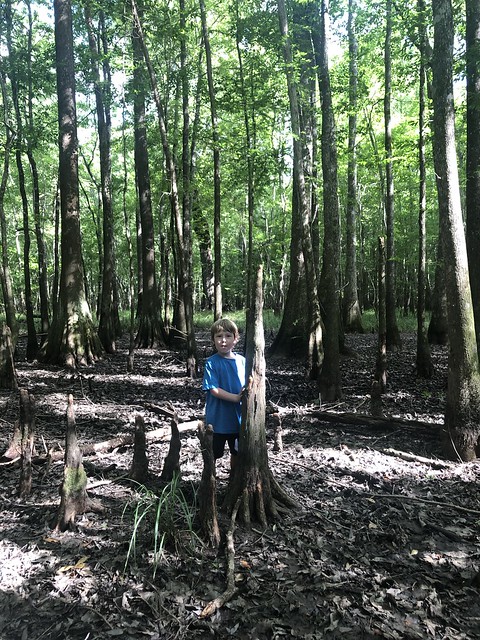 Forest was excited to find this very tall cypress knee! I was barely taller than it was! 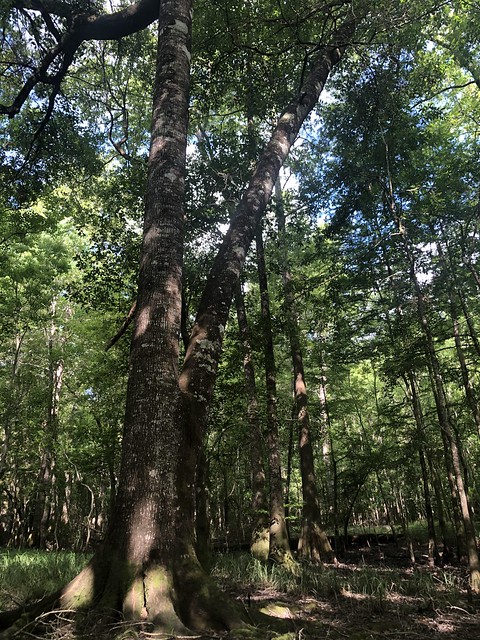 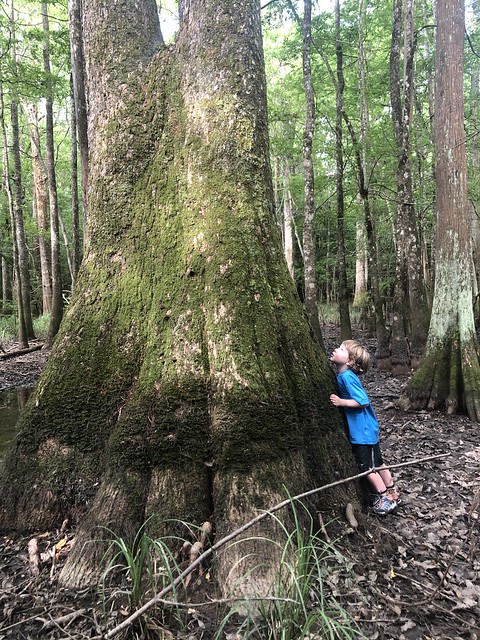 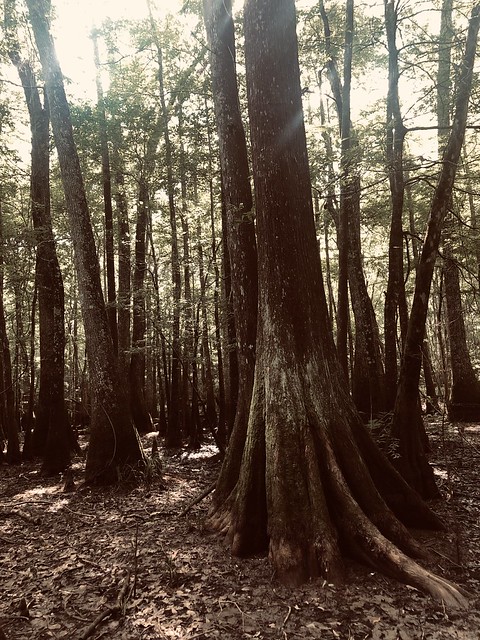 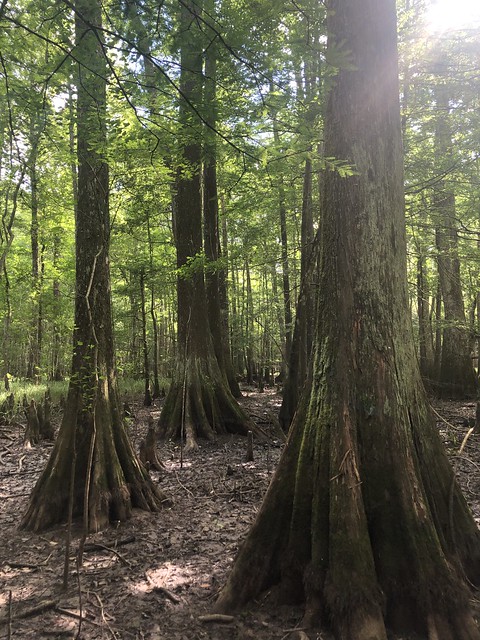 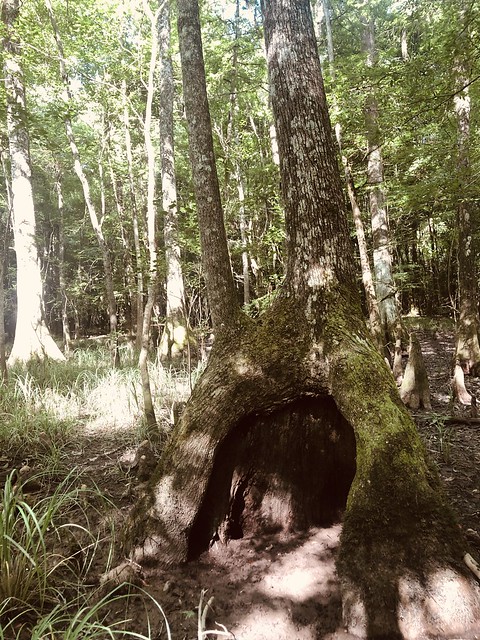 I really could have spent much longer walking along the slough, digging further back and closer to Turkey Creek. When we visit these places during dry times it is always hard to imagine what they would look like during the wet season. Each time they offer a different perspective and sense of places, these swamps whether they are dry or full of water to your waist. I do miss walking in the cool swamp water of the summer. Forest needs to be a bit taller before we delve into that world! 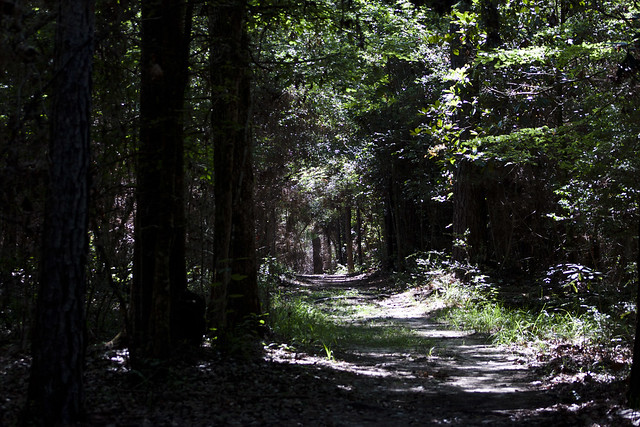 All in all, a great morning in the woods.