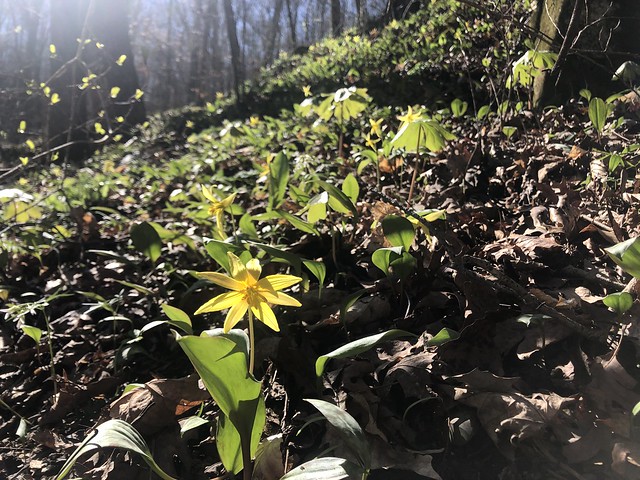 It’s back to the grind for us this week, but last week Chris, Forest, and I checked out of state and drove to Arkansas to spend the week in a cute AirBnB cabin on the SE edge of the Ozark National Forest. Between cooler weather and the state of Arkansas not being on their spring break, it was fairly quiet for us on the trails except in a few areas. We could see that ramping up as we left our cabin on Saturday, the start of a glorious weekend meant an influx of ORVs, and canoes and kayaks being driven into the Ozarks as we passed heading south to I-40.

We hiked, we waterfalled, we did some rock scrambling and bushwhacking, put some out and back miles onto the Ozark Highlands Trail (and now I want to hike it!), did some relaxing on the front porch while reading and playing games, and overall enjoyed having very little cell signal. We even got to meet Old Man Winter once again on Thursday when we briefly saw snow at higher elevations in the mountains. Thankfully it only stuck around briefly but it was a very cold day for us, though we did explore one of the cooler sets of waterfalls we visited in the Boen Gulf area of the NF that day.

And between when we arrived and when we left, many of the spring ephemerals were beginning to open. I managed to nab a few Life List goals because of this and left very happy with our botanical finds. Chris did some salamander searching and I think Forest only wished it was summer so he could have splashed in all of the pools of water at the base of the falls.

The return was a bit somber because we had an inkling one of our last two remaining feral cats might have died after Chris saw a loose dog on our property via our outdoor cameras, and the cat never showed back up on camera later in the week. Sure enough, we found Ruby dead on the garden path not far from the front door. Little Callie has been mourning her and I’m more than a little worried for LC now that she doesn’t have an outside companion.

So, we are easing back into life. I’m looking forward to my second COVID shot later this week and Chris will likely find out if he received the placebo shot this week as J&J is telling trial participants now and will vaccinate them if they didn’t get the shot the first time. And of course, spring is in full swing here and I’ve got a garden to get working in.

Hope all is well out there with my readers in Blog Land!