Thinking:
The last time I did one of these was in December and I lamented then that I hadn’t done one since August. I don’t have a very good track record lately, do I?

Well, a lot has been going on behind the scenes. 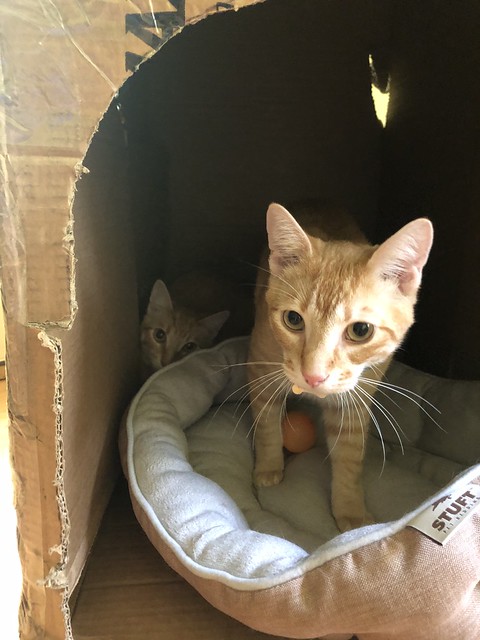 First off, we have new feline overlords!

I first found Rusty and Dusty on the Petfinder app back in January. Forest and I had started looking for cats and I was favoriting ones that were kid friendly and those who were in bonded pairs. These two were brothers and they had/have three sisters. Chris wanted to wait until we took our Arkansas trip before we started looking for cats and while we were on the trip I emailed the rescue group to find out more about them. I filled out their application and we made plans to meet them. Their living situation wasn’t the best, though they were well cared for. They were born in a garage from two feral cats and a woman took them in and cared for them, though she had at least one cat of her own. So she started raising them in her laundry room and once they were old enough she would shuttle them to her screened-in porch during the day. Which is how they had lived for most of this last year. We were the first people to have come to see them. After a few days of thinking, we decided to go ahead with adopting them and made plans for after Easter to have them dropped off at the house. A few days out from that we almost didn’t get them as the woman who had been raising them decided she wanted to keep them. It was a dramatic evening afterwards with tears all around but circumstances changed later that night and the next morning when she thought better of it and realized they would be better off with us. This is a synopsis of what happened, of course, it was a terribly evening and we were really upset. Finally, they arrived at our house and have been with us for the last week and a half. 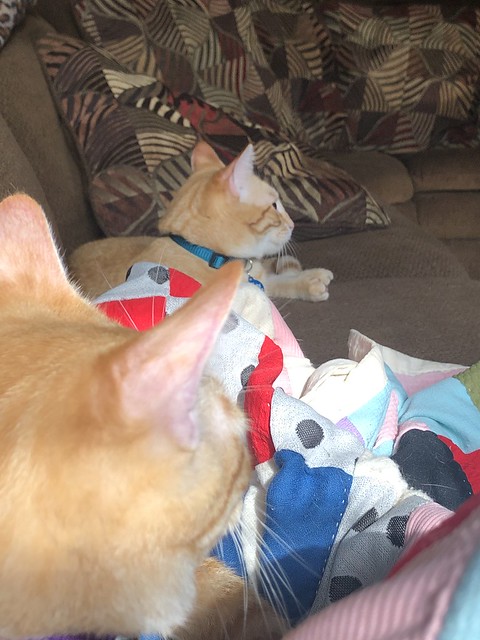 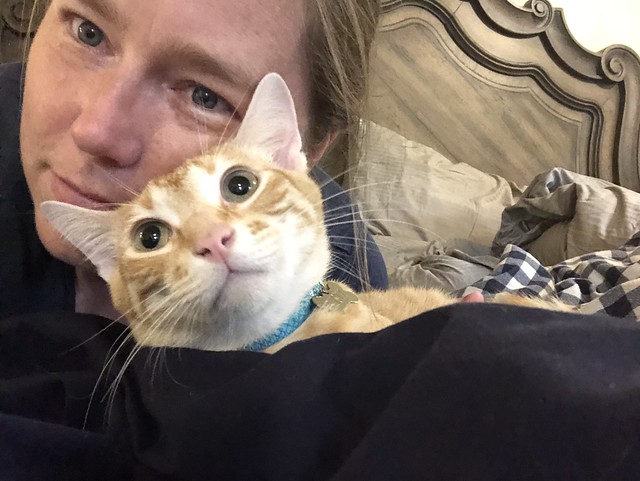 They are a pair of sweet goobers and yes, sometimes we have a hard time telling them apart. Rusty is the more social and less scared one so if you see a cat first it is likely Rusty. Dusty is a scaredy-cat but he is also sweet and Dusty is smaller. Both really are very sweet to each other and don’t really fight all that much. They’ve gone from hiding under our bed for days on end to sleeping on the bed at night. And they love to hang out on the couch upstairs while you watch tv because they haven’t figured out that tv isn’t real yet. And they love Forest, though he is too rambunctious for them still and they haven’t gotten used to all the movement and noise, even with us sometimes, they will scatter quickly if you move too fast. We love them and they will be a fun addition to the household for the next decade and a half. 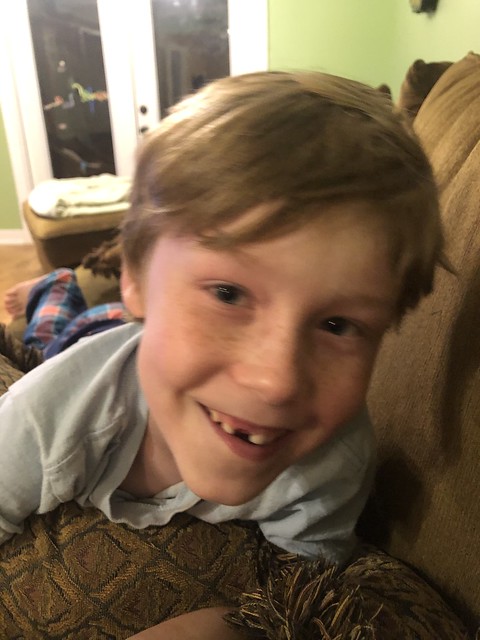 In Forest-land, he’s lost two teeth in the course of a week and a half. He’d had two loose teeth for a few months and finally the bottom one that was loose came out the night before Easter and his top one came out about a week ago. The tooth fairy has been busy around our house lately! And Forest is doing great, otherwise. He’s currently in a very imaginative place and wants to play battle dragons, which is a made up game adapted from one of his games off his tablet!

It was doing pretty well until a week ago. Even the deer weren’t being terrible assholes. Plants were recovering from the freeze in February and most plants were rebounding. 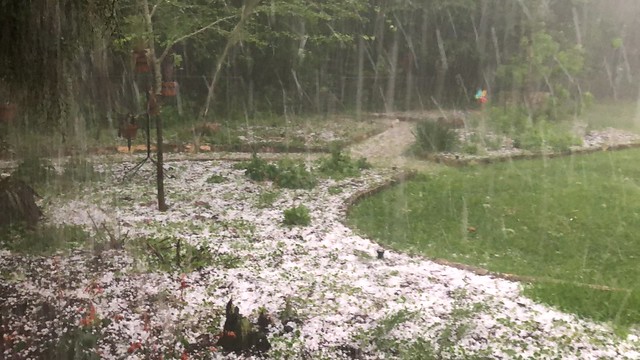 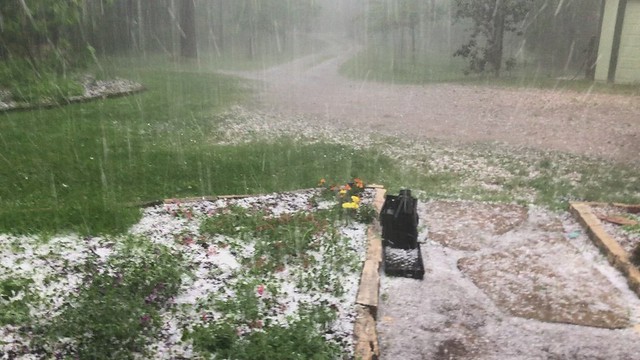 I had seen earlier in the afternoon this storm moving in from the hill country and it had dropped hail out that direction. The storm had shrunk by the time it reached our area but it also made a beeline for us. Chris said it still had hail in the center so he moved my car under the carport and cleaned up a few things. We sat outside to watch the rain and hoped the hail wouldn’t come but it did. It was light for the first thirty seconds but after that the clouds started dropping buckets of ice and Chris and I just looked at each other in amazement and shock. It was very loud because of our metal roof. The only good thing was we got to see the new drain in action that Chris installed in early February that will help drain water from the front walkway area to the backyard. It worked!

Needless to say the garden was torn to shreds and then the deer came by to add insult to injury the day after.

We still haven’t started the new edible garden beds, yet. I did end up planting zinnia seeds in the perimeter bed near the blackberries so I am excited to have some flowers out there this summer. To be honest, I wouldn’t mind a half flower garden/half edible garden out there since we will never be able to grow what we want in our actual flower garden without the deer browsing. We don’t usually use all the space in the edible garden anyway and we don’t eat a lot of the edible plants we do grow. Anyway, there’s a lot we can re-envision out there—more perennial edibles instead of annual edibles—something. I don’t know….

Reading:
I have been reading A LOT! I have a lull occasionally but then will complete 2-3 books in a week. I’ll hit some high points from the last few months:

+Open Book by Jessica Simpson: I loved this! I listened as an audiobook and I highly recommend as Jessica reads it herself. It’s a memoir and you get a glimpse of her life over the last 30 years. You see some behind the scenes of her and Nick but you really get a feeling of what a dipshit John Mayer really is.

+Thousand-Miler: Adventures Hiking the Ice Age Trail by Melanie Radzicki McManus: Audiobook—I loved this book! Melanie is an ultrarunner who wanted to FKT the IAT. The book gives you glimpses of her hike/run but also goes into other stories of other hikers on the IAT that she meets but also some of the historical aspects of the IAT. It isn’t a play-by-play of a thru-hike. Definitely add it to your hiking trail memoir collection!

+New Naturalism: Designing and Planting A Resilient, Ecologically Vibrant Home Garden by Kelly D. Norris: This is a very pretty book that guides gardeners into transitioning into the Piet Oudolf style of naturalistic gardening, which isn’t strictly native plants but a more wild design. I would say this isn’t for beginners but also beginners should read it. There are plenty of basics covered but there are also a lot of in depth analysis and ideas to go with it. It is a book you will be referencing for a long time.

+Floret Farm’s Discovering Dahlias: A Guide to Growing and Arranging Magnificent Blooms by Erin Benzakein: So, I’ve been falling in love with dahlias on social media. They are gorgeous and generally aren’t considered to do well in Texas and the south. Except—people are growing them! You have to give them more shade than you would think in the summer but people are being successful with them. So I ordered some dahlias tubers from Etsy and am trying my hand at them. I am growing them at the office, though, because they wouldn’t survive the deer. Unfortunately I didn’t account for the fact that the landscaping company comes in and sprays sometimes and a few were sprayed so I’m not sure if they will recover. I need to put a sign or fence them off somehow. We shall see. The book is beautiful and really details how to grow them and all of the varieties there are.

+Under Western Skies: Visionary Gardens from the Rocky Mountains to the Pacific Coast by Jennifer Jewell and Caitlin Atkinson: Another beautiful book to add to your garden book collection! So many gorgeous gardens from the American West are chronicled in here and you will want to pull so many design elements from there. Page after page will have you wanting to stand in each photo and wish that was your garden to enjoy.

+The Paris Wife by Paula McLain: A fiction book based on Hemingway’s first wife. I knew Hemingway was an ass but you really get a glimpse of it here and I really felt bad for his first wife and their son. It’s 1920s glitz and glamour but also you feel the dirty underbelly of that lifestyle.

+The Light Through the Leaves by Glendy Vanderah: If you loved Where the Forest Meets the Stars, Glendy’s debut novel a few years ago, you will love her second book! I really adore her writing and because she has a biologist and naturalist background the details are where it matters. You know how you read a book and someone is writing about nature or science and they get some detail wrong? And it is annoying because they used the wrong term? Well, Glendy doesn’t do that because she knows what she’s writing about! Definitely add it to your summer beach read list!

+The Way of the Gardener: Lost in the Weeds Along the Camino de Santiago by Lyndon Penner: Another trail memoir that goes against the typical grain, though I was left wondering if the author totally enjoyed his walk! Lyndon is a gardener from Canada and had the chance to hike the Camino with a friend a few years ago. He brings his gardening knowledge to this book so you get the plant aspect of what is found along the Camino as well as some historical tidbits along the way. And since he is not a thru-hiker are heart you see some of the antics that you wouldn’t see from a typical thru-hiker. I found myself wanting to reach through the book and prepare him a bit more, though.

Making:
I have not been making a lot of art but I have been doing blind contour drawings to stay in the creative groove and have started doing sketchbook work again. I am cleaning up my studio so I hope to start painting again soon. I have made two crochet pieces in the last several months, a shawl and a shirt. I have a photo of the shawl but it isn’t great and I never took a photo of the shirt so I’ll have to remedy that and share soon.

Looking Forward:
Seeing family in May! My parents are coming down and brother’s family are coming down later in the month. And finally seeing some friends again! I had my first friend date last weekend and it was fantastic! I’m also hoping for some hiking trips to east Texas and looking forward to getting beach time in as well.

*A note*: I was alerted that Feedburner is going to phase out the email subscription service for feeds soon. I need to figure out how to migrate that to another service so if you see any changes and get this via email, that’s what happened. They had said they were phasing out Feedburner totally about 8 or 9 years ago and that never happened so I’m not going to hold my breath too much but will try to take action to migrate it anyway. Just FYI*