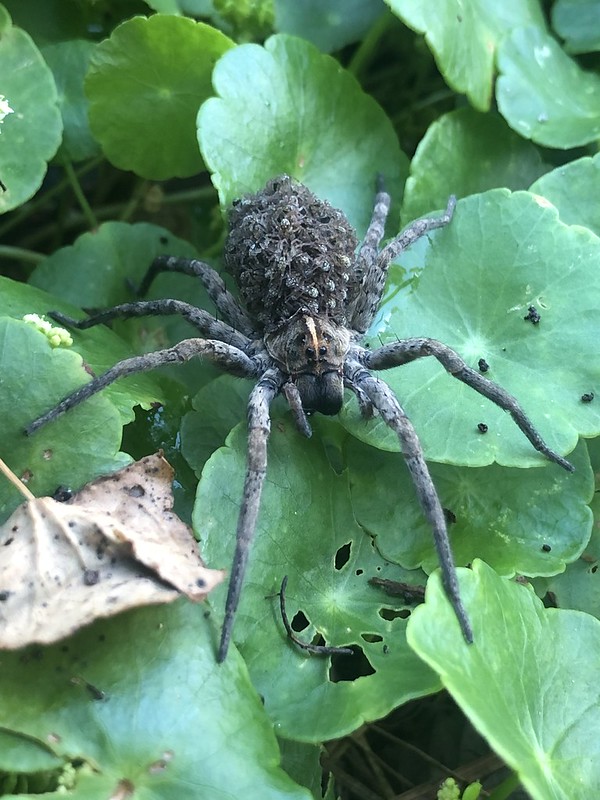 This month has felt very long and also incredibly short. It kicked off with this momma wolf spider out in the edible garden. I was trying to pull the pennywort that had taken over one of the perimeter beds when she scurried out with her babies. I quickly took some photos and let her be. 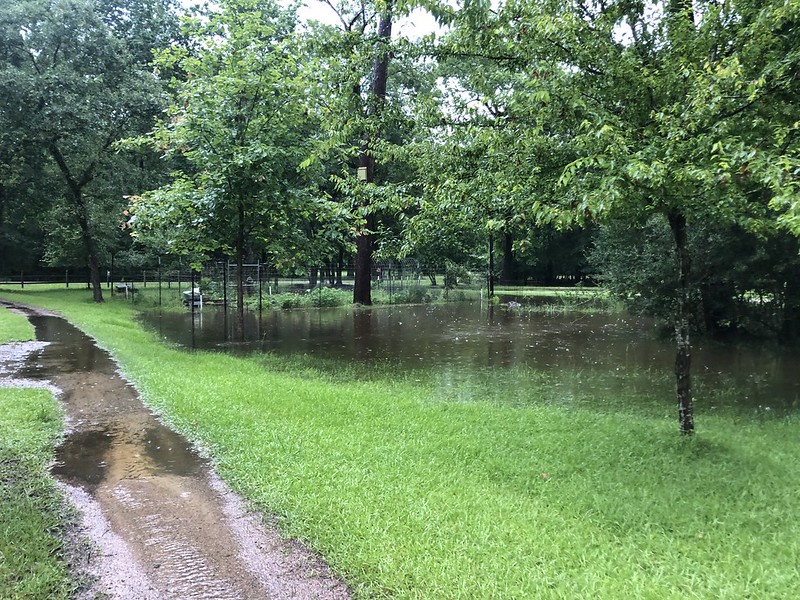 And it wouldn’t be a spring season without a little too much water. After a rather soggy May and then a week of some heavier rain that lingered in early June, we had some minor flooding of the yard and pond fringe. Then of course, as per normal, we dried out and had nothing for a few weeks. Now we’re back to some summer thunderstorm activity. And in the odd twist of fate (climate change!) we were 30* cooler than the PacNW yesterday. 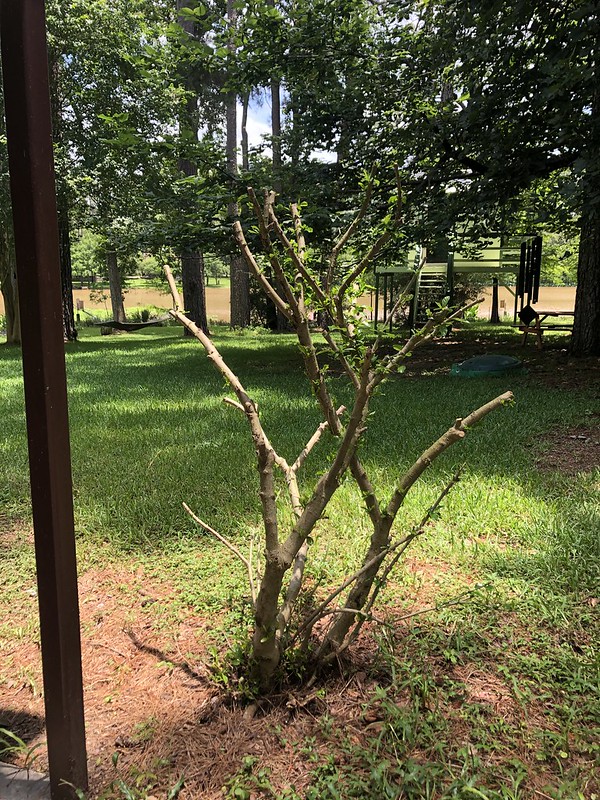 Chris hacked the gardenia back to where most of the new growth was coming back from the freeze. It still looks ragged but give it a year and I think we’ll get some blooms next May! 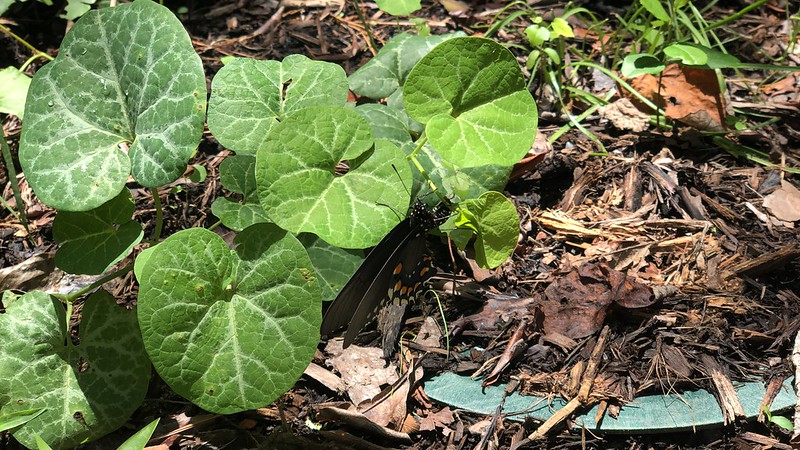 In my years of living here we have never had the pipevine caterpillar explosion we’ve had this year! There have been at least three rounds of caterpillars in the garden and the only pipevine that is still standing is the giant tropical species that is too toxic for them to eat. I’m sure we had eggs on them and I do feel guilty about keeping that pipevine around (it’s so cool, though!) but the A. fimbriata and A. watonsii have grown and been eaten at least three times this season too. And I saw another adult pipevine looking for somewhere to lay eggs and I had to tell her I had nothing available but to steer clear of the toxic vine. I’m sure that wasn’t heeded! 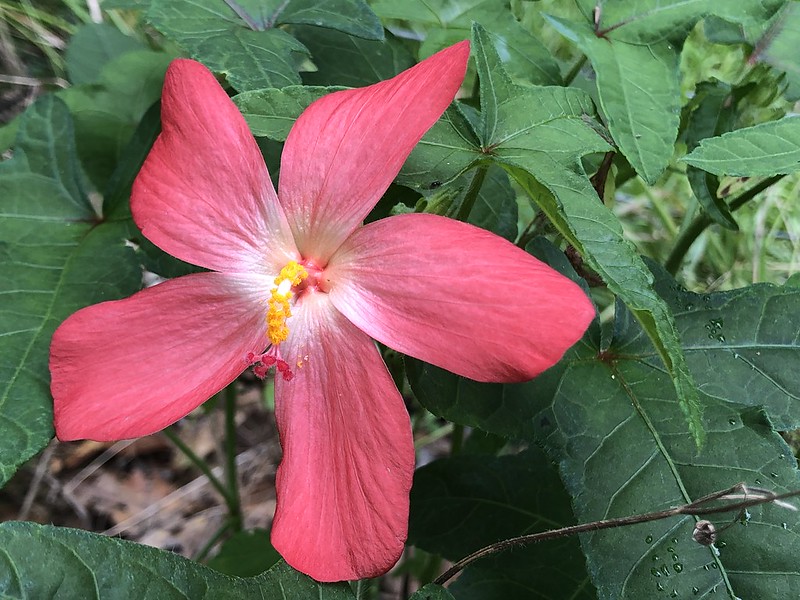 And another delight to see from the freeze was the abelmochus coming back and flowering. Not all of them made it but this particular plant, which has been in the ground a couple of years, pulled through. 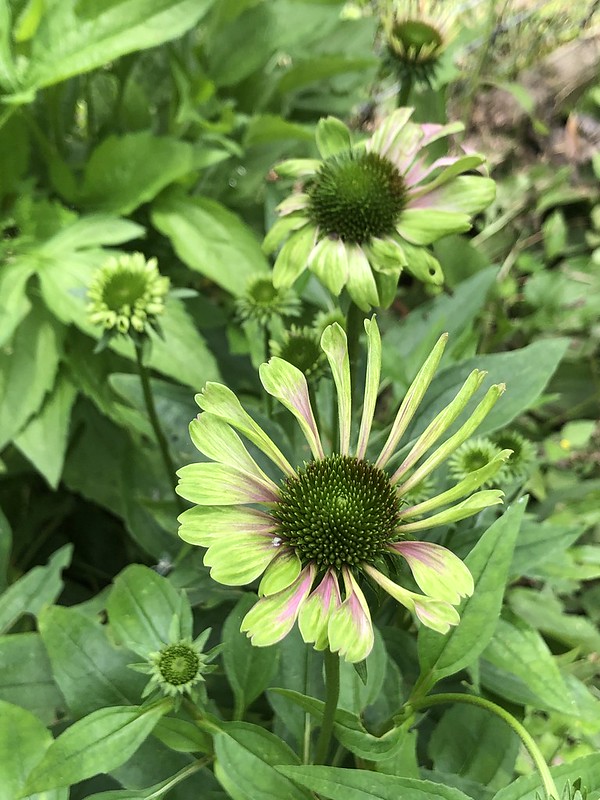 The echinacea were always a delight—this is before they truly started looking like themselves. 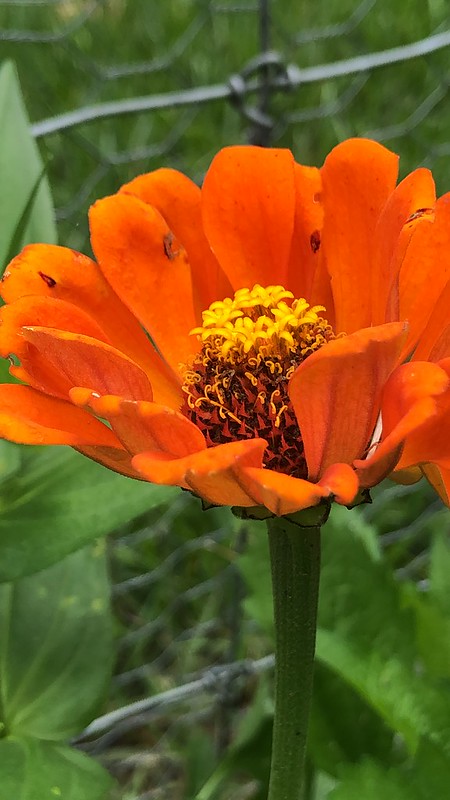 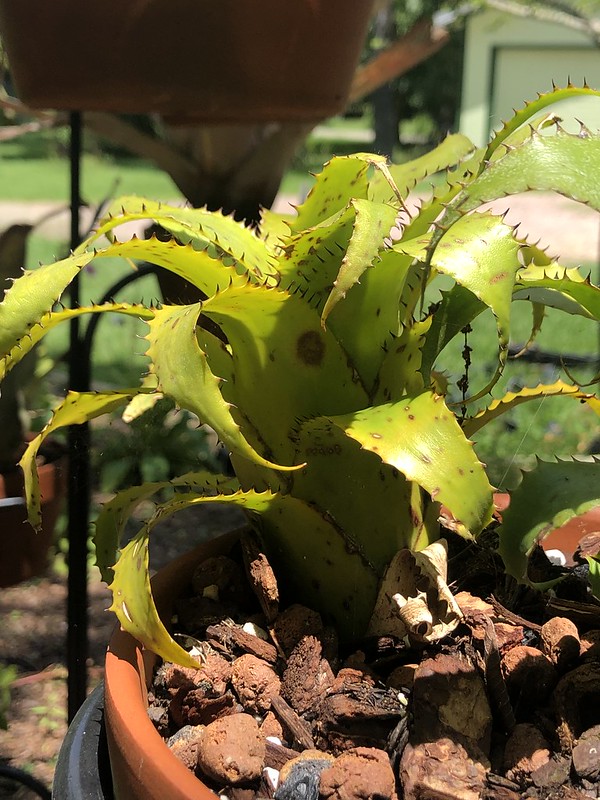 I’m not sure the name of this bromeliad but it is one of Chris’ and I love it! The light hits just right and it is such a unique plant. 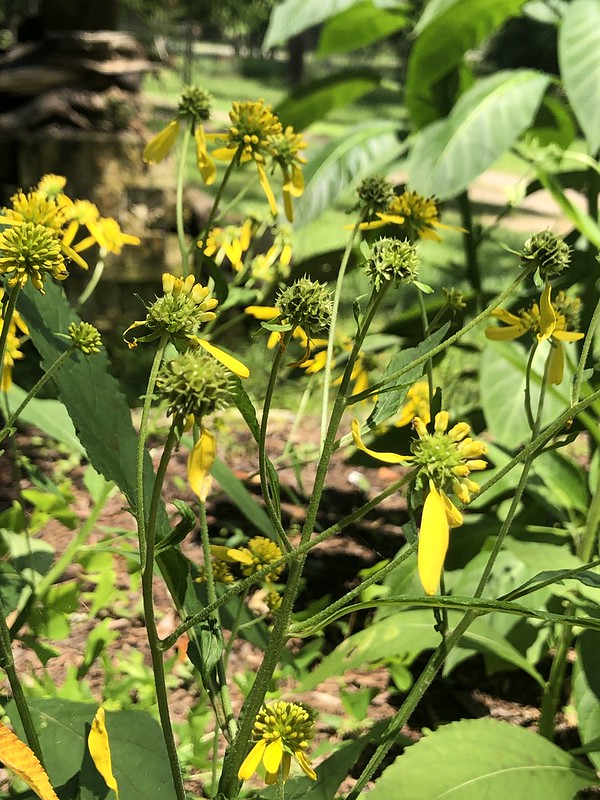 The wingstem, Verbesina alternifolia, finally made an appearance and began blooming, much to my delight. It is slowly spreading in the area I wanted it to spread and I would like to get more established in another part of the garden beds, too. 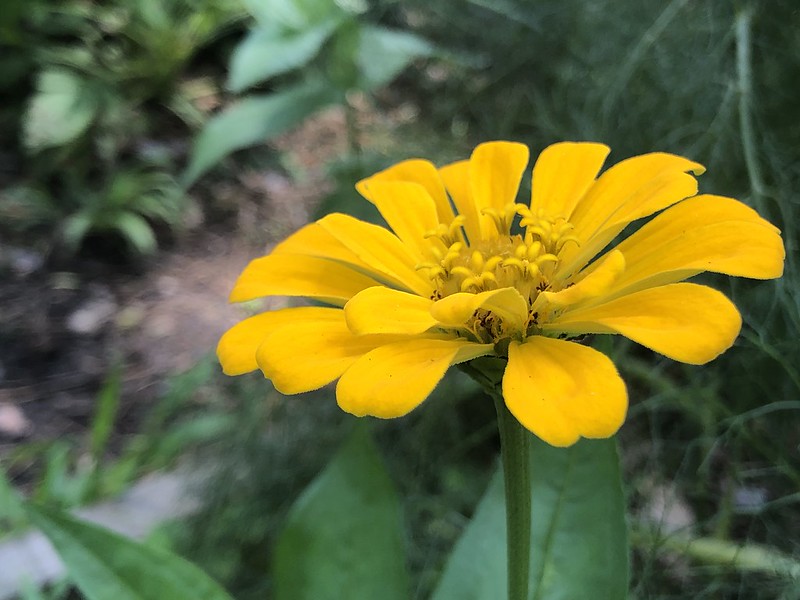 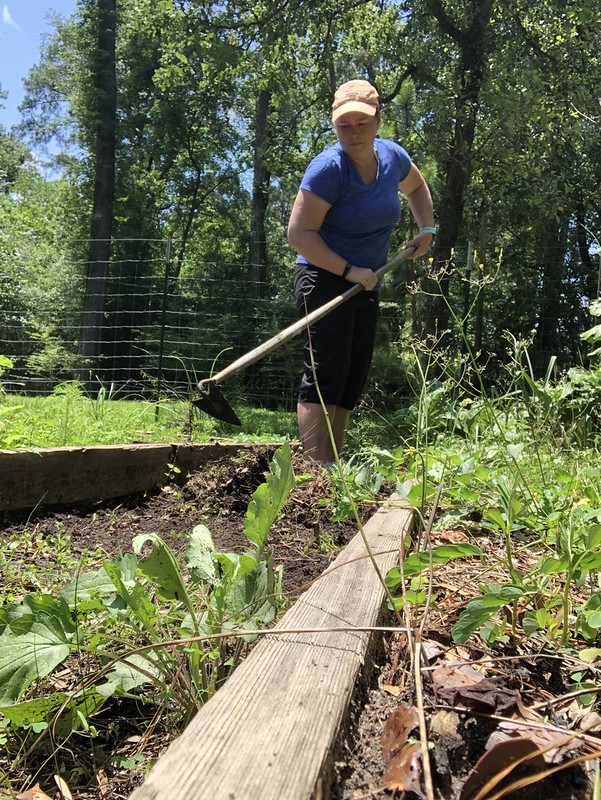 Early to mid-month I spent a week or so working on cleaning up the edible garden. We’d let the weeds get out of control there this spring as we’d thought we were going to be rebuilding the beds—but we haven’t gotten around to it for various reasons. So I finally cleared the weeds from the path and put down mulch there. I’m slowly working on weeding the beds themselves. 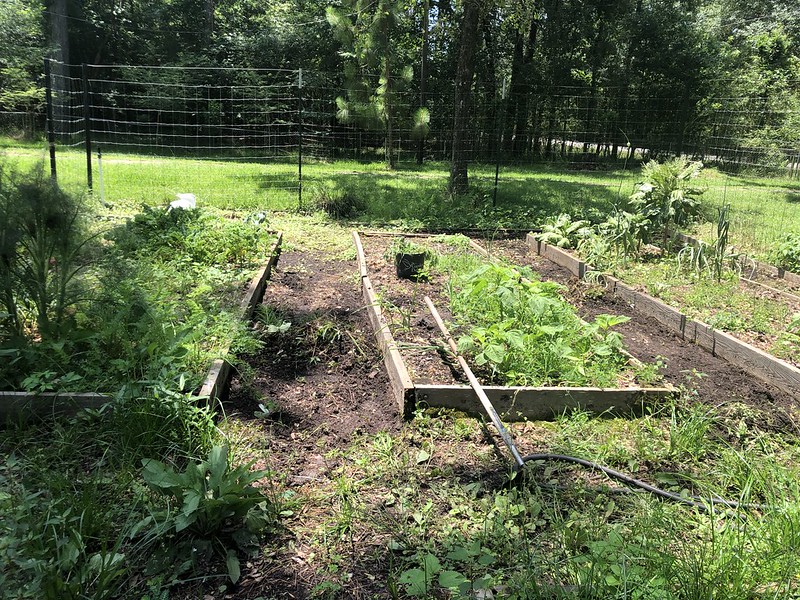 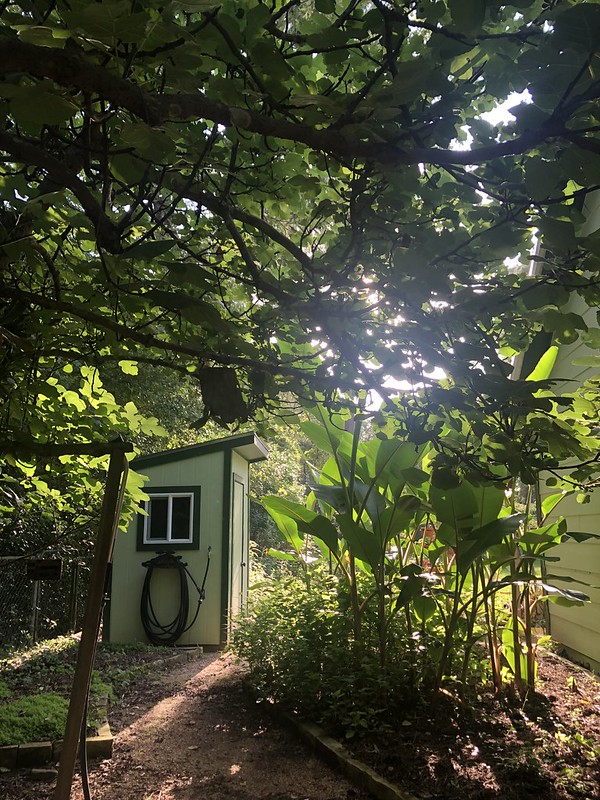 I still love the way the light filters through on the side yard bed but I really wish we could figure out how to get some other stuff established over here. Far too many gaps in plantings. 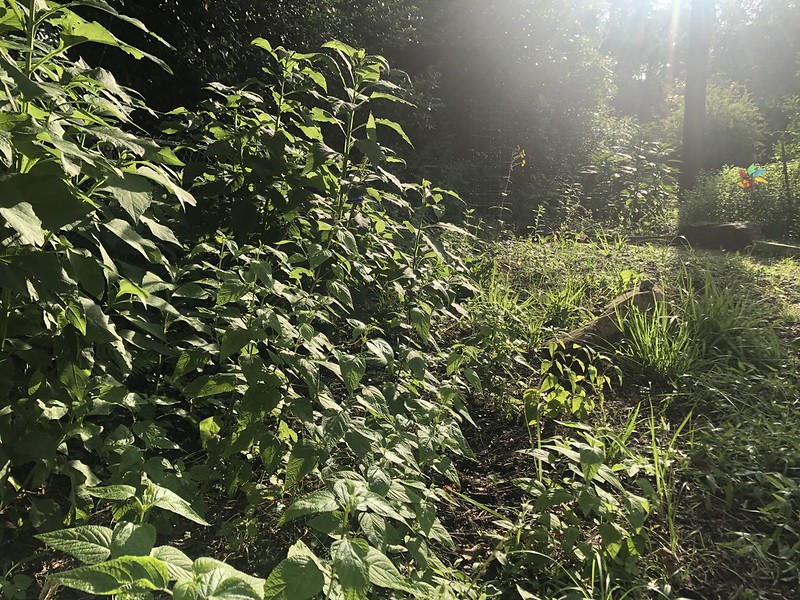 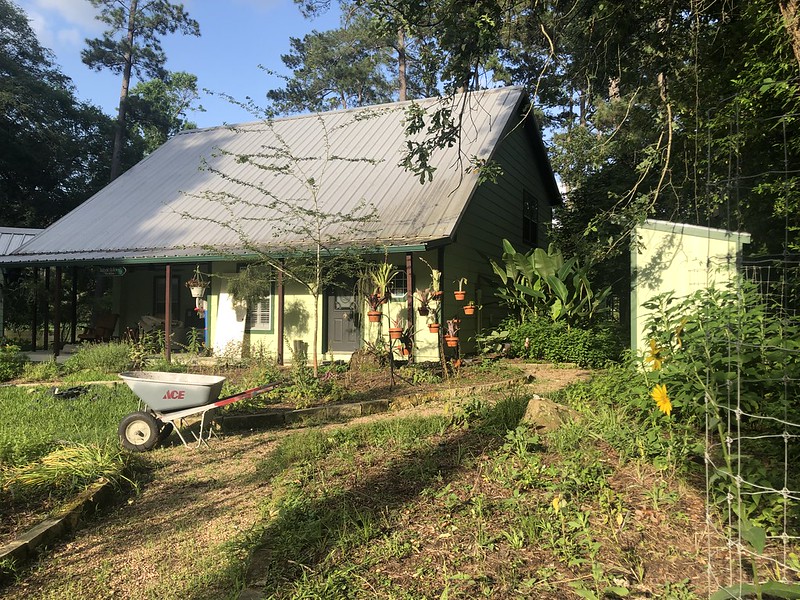 It was looking pretty good from this view earlier in the month. I need to get back on top of the weeds in the pathway, though! 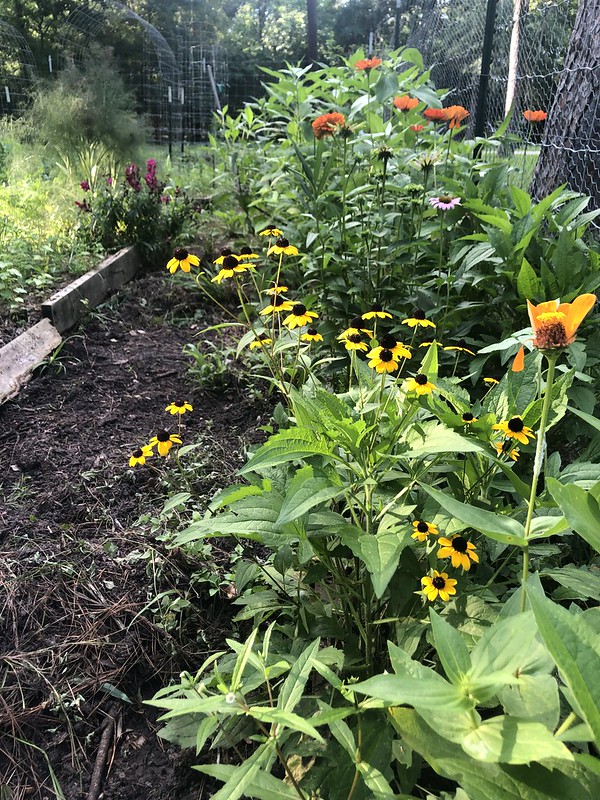 Bright spots out in the edible garden! 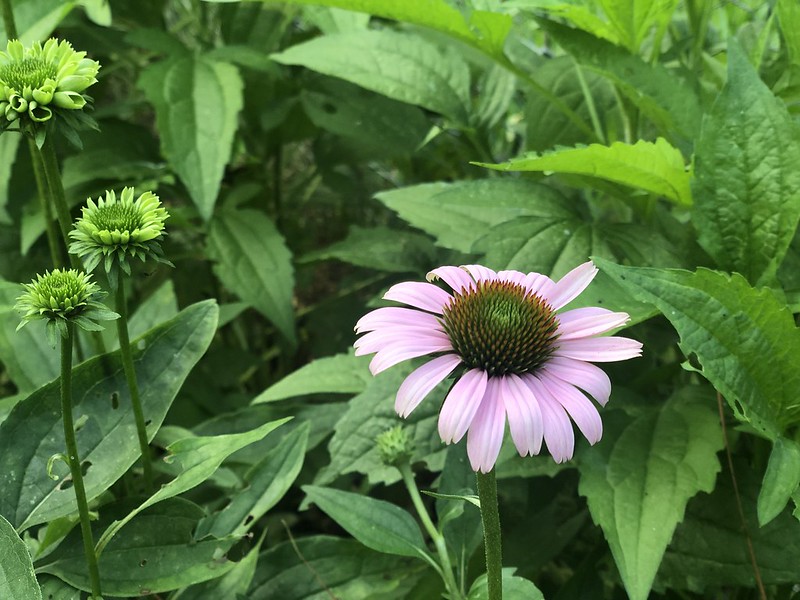 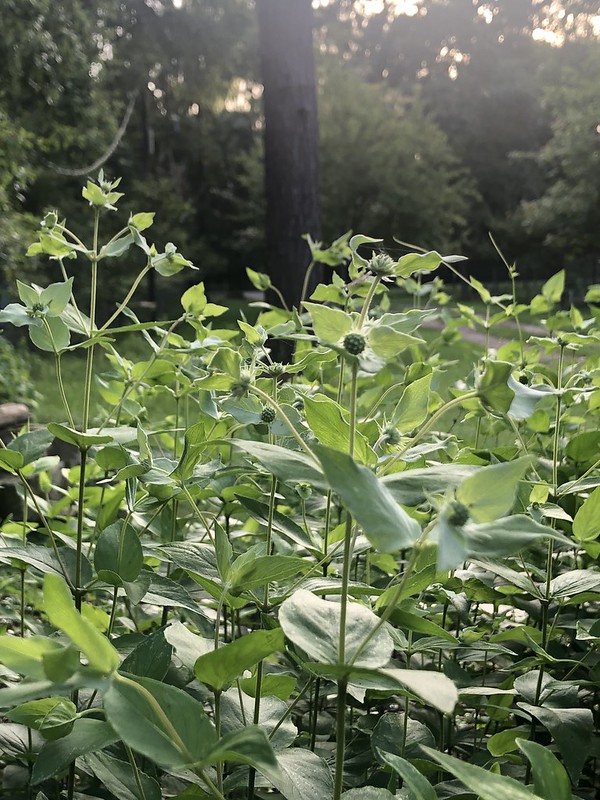 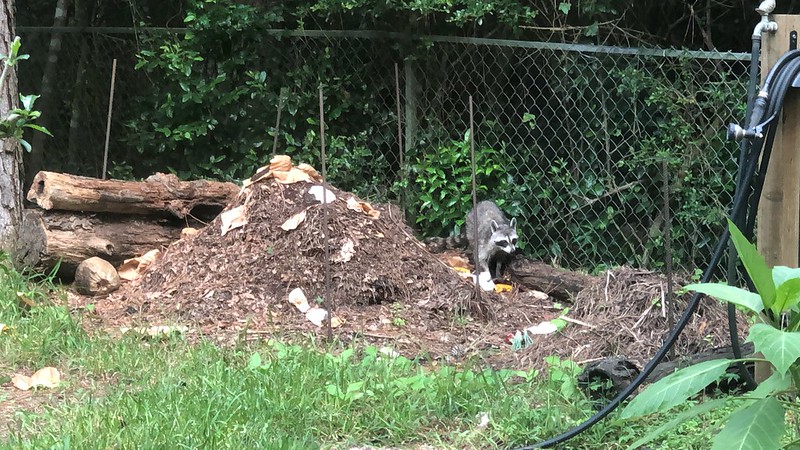 We had a racoon visitor to the compost bins a week ago or so. Forest even saw it again down by the pond recently as well. And I need to get the videos from the SD card, but we’ve caught several fawns on our game cam as well as our first coyote! We’ve known they were around but this was the first time we’ve had proof! 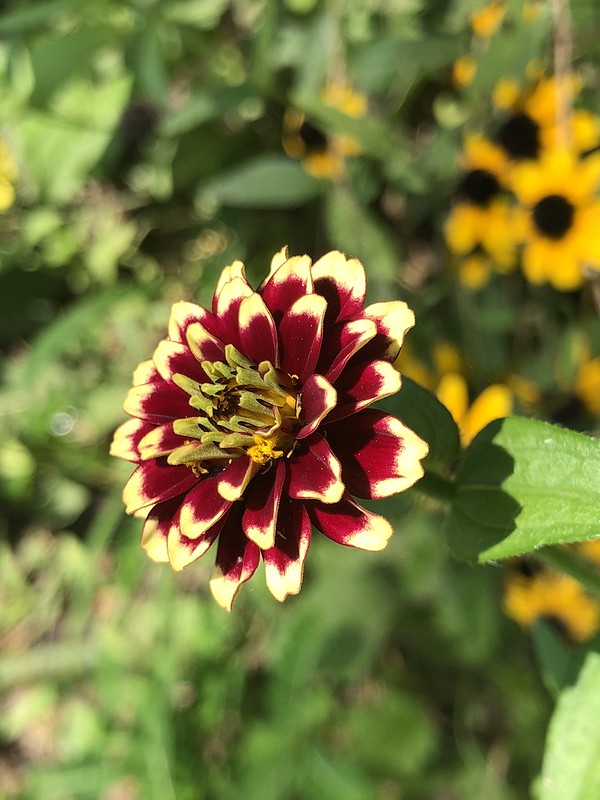 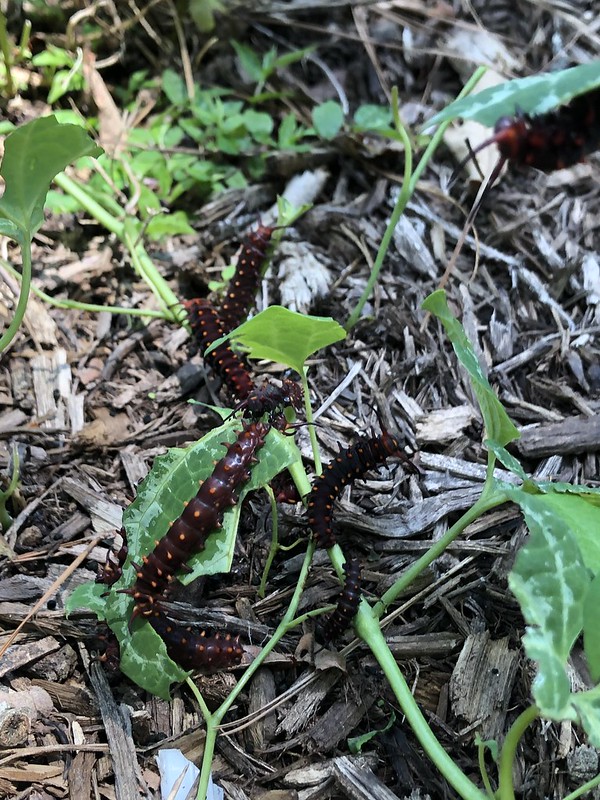 Some of the very, very hungry caterpillars! 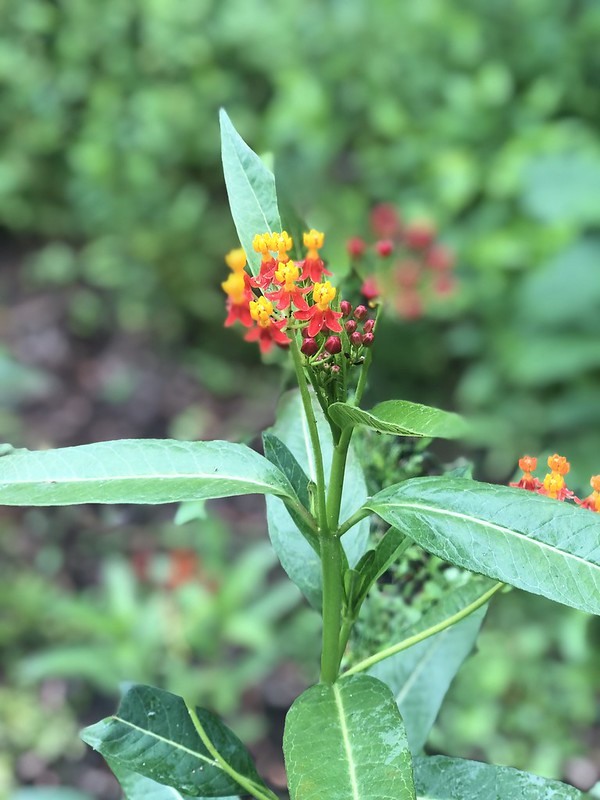 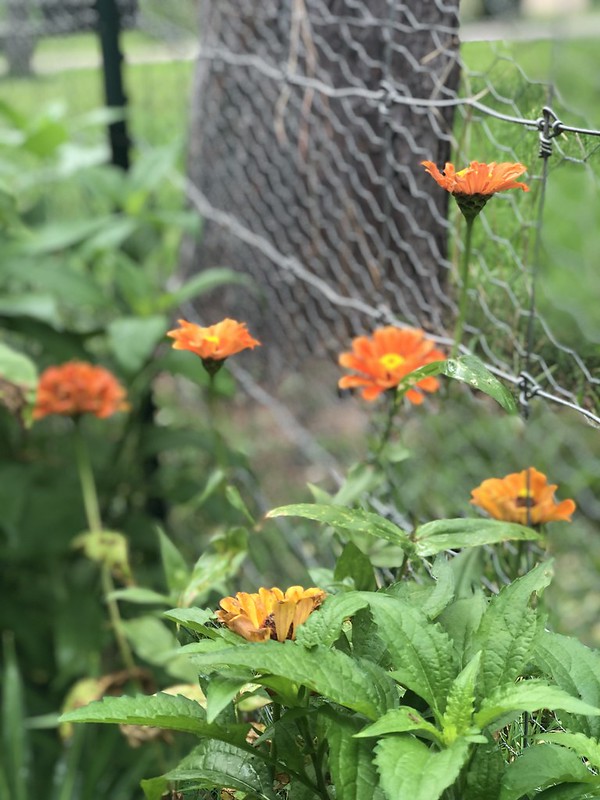 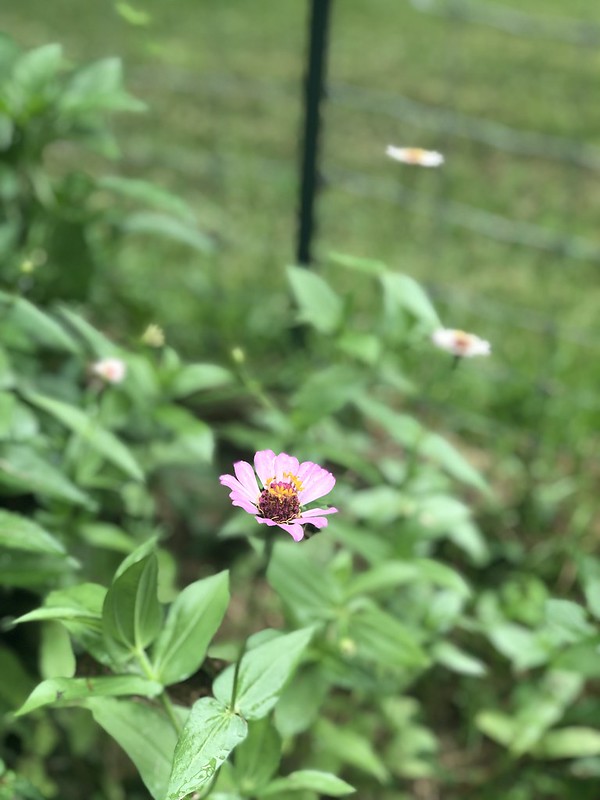 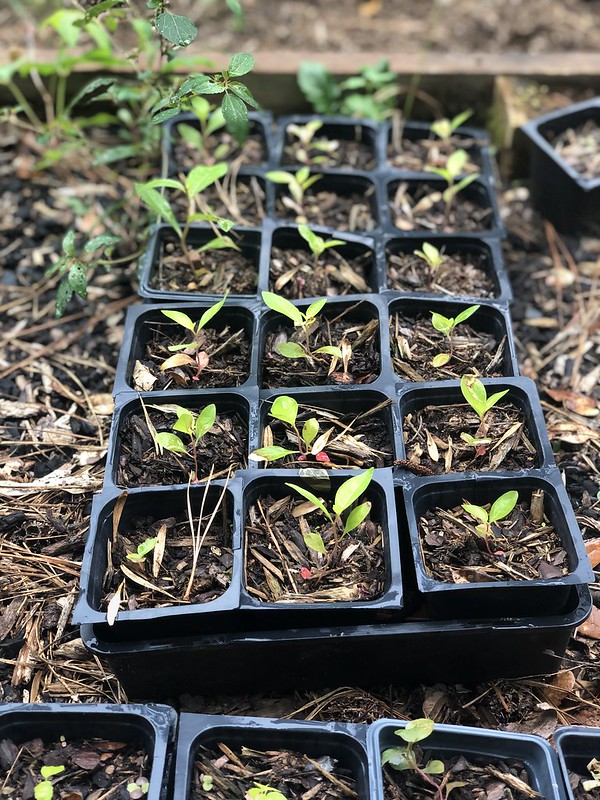 I’m trying to grow out various plants and our potting bench is full so the edible garden is the makeshift grow out space right now. These are Ludwigia alternifolia, some of which we’ll put out by the pond and others I might put in our flower beds, and possibly some of the wetter areas of the yard. 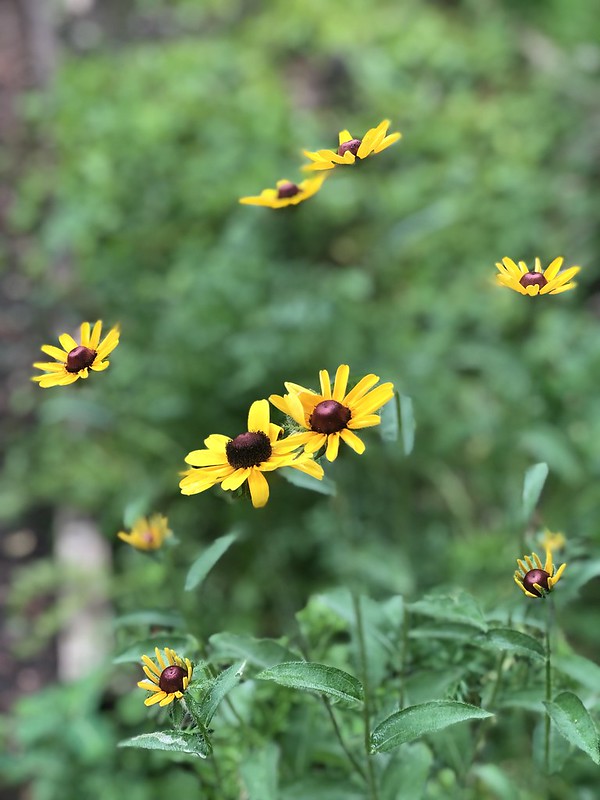 This is a mystery seed that came up in our carrot patch. I thought it was going to be a sunflower but it turned out to be some kind of rudkbeckia. The leaves are very fuzzy and don’t match the ones growing in the garden so I’m unsure where it even came from. 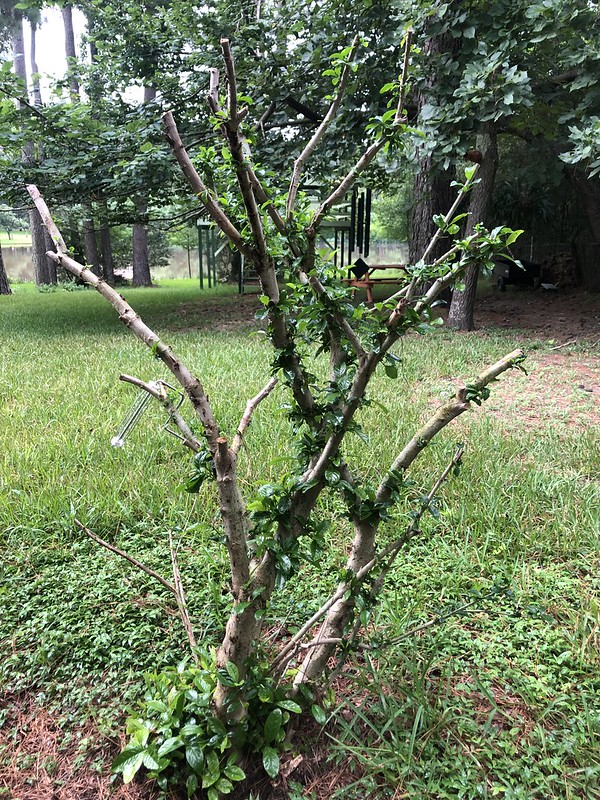 And finally, a second photo of that gardenia later in the month with even more growth, particularly at the base.

July is looking to be rather full as well so I doubt we will even get around to making the garden beds (I’m really thinking it will turn into a fall project now!) but I hope there are some more wonderful things to share with you next month!