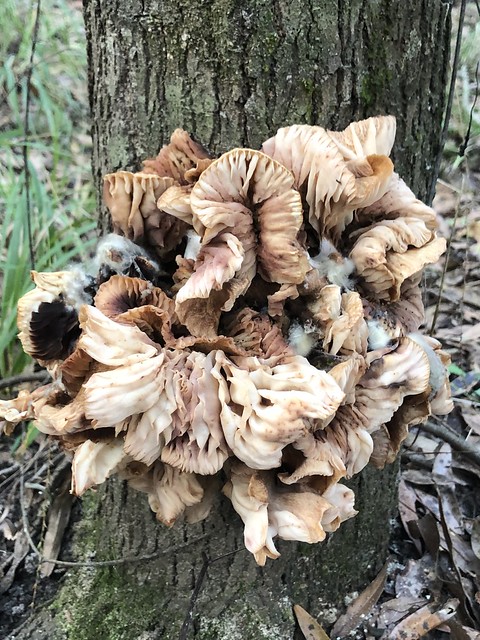 A few weeks ago we escaped the constant weekend work that has been pouring concrete raised beds and went for an early morning hike at Lake Creek Preserve. Chris and I had visited by ourselves in July while Forest was visiting grandparents and the mosquitoes were terrible then. I guess I didn’t end up writing about it here but you can read a post from Dec 2020 to see this park in a different season.

Autumn has brought out the fungi once again and I got a kick out of this fungi upon fungi situation with the mold growing on the mushroom. 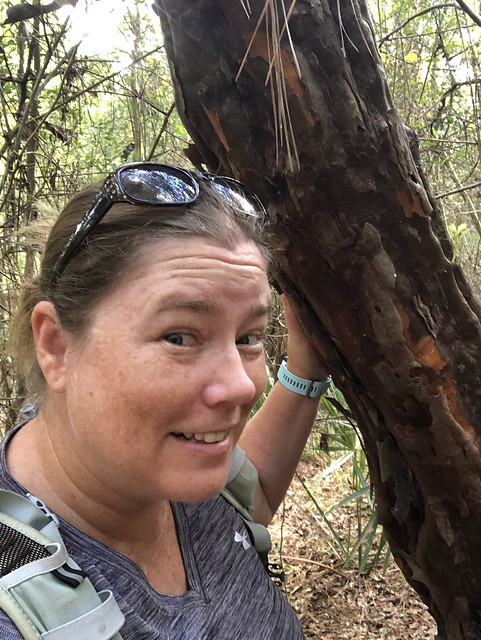 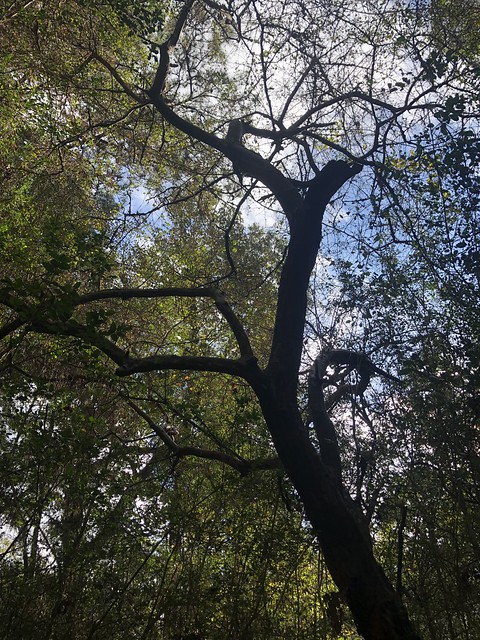 There used to be a sign marking this champion hawthorn but it is no longer there. However, there is a game cam watching the tree about 12′ up in an adjacent tree–be sure to wave! 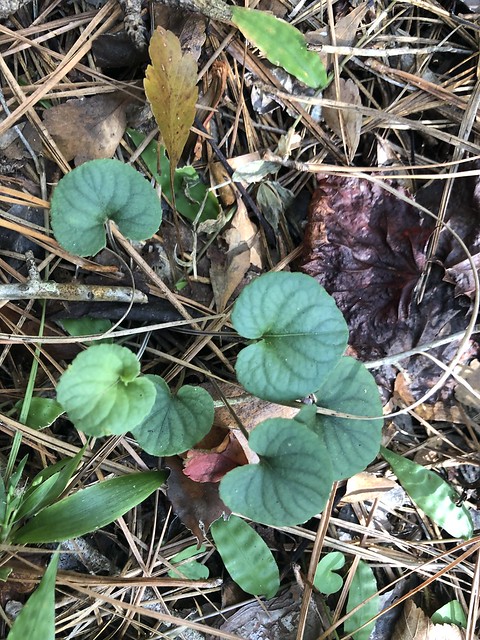 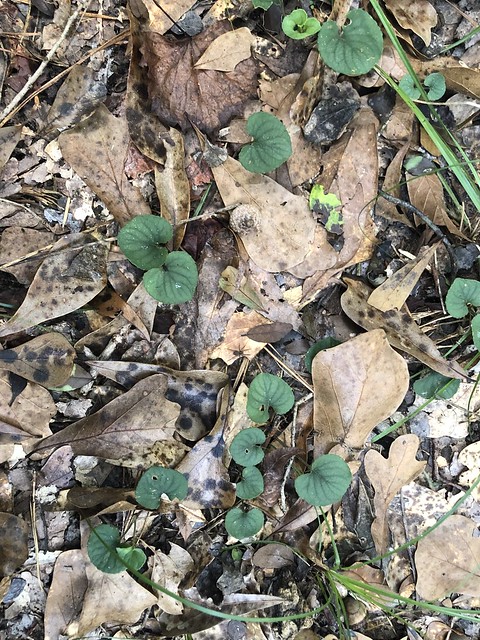 Prostrate blue violet, Viola walteri, which is almost about as far west as the sightings in Texas occur. There are a couple further west up in Sam Houston NF. It turns out that I had actually seen it here a few years ago on our first visit but didn’t realize it until I started looking at my old entries on iNaturalist. There are only a smattering of occurrences in Texas with most of the locations occurring in the mid to upper south, Louisiana over to Virginia. I’ll have to go back in the spring to catch it in bloom. 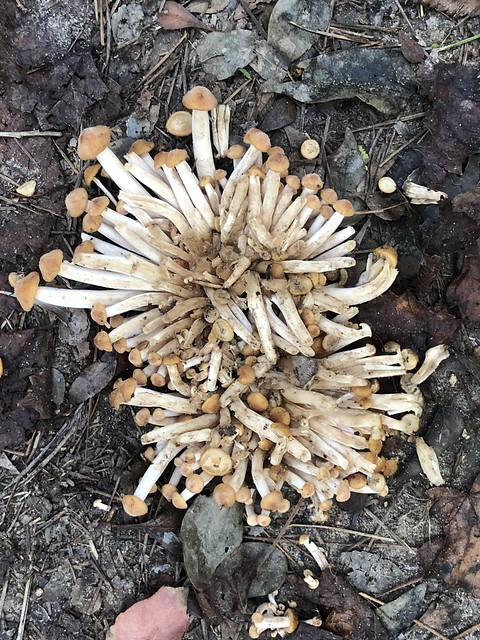 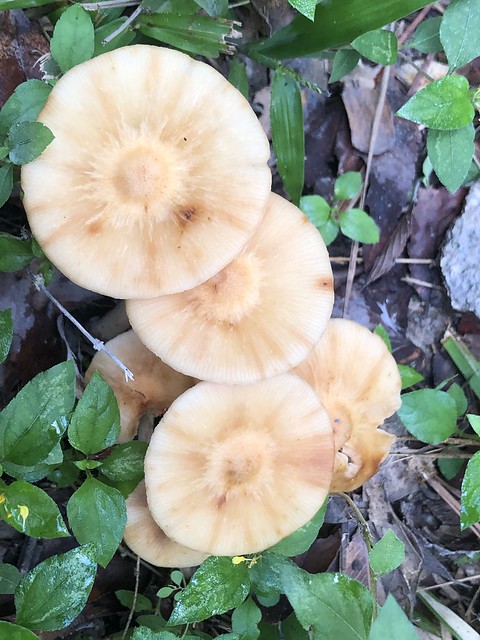 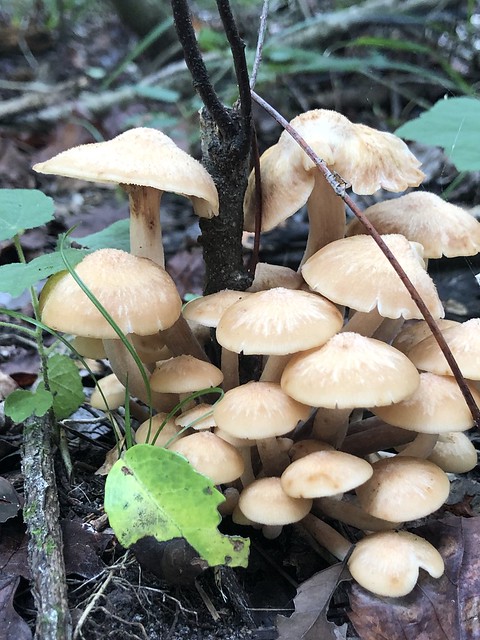 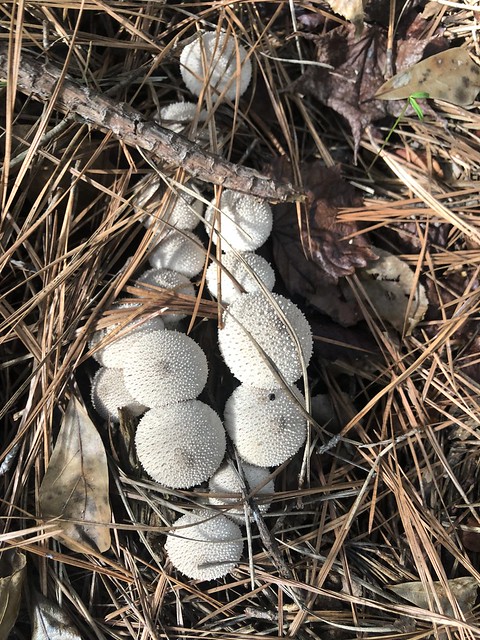 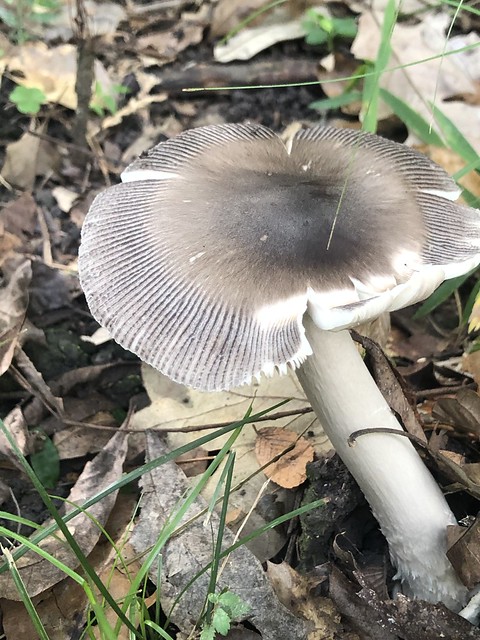 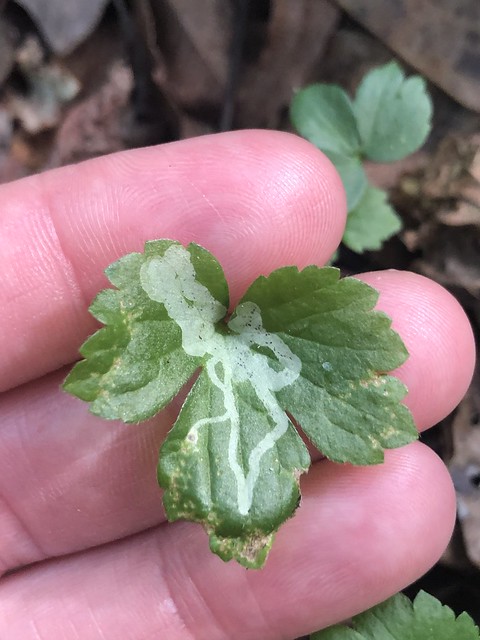 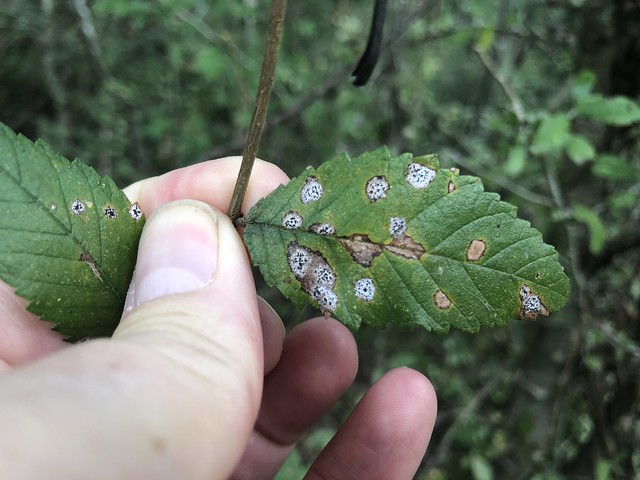 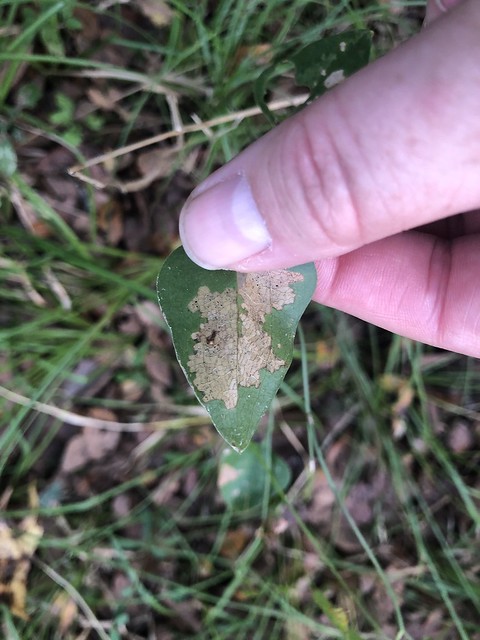 My new goal on iNaturalist is to start documenting leaf miner, saw fly, and other insect markings on leaves. I’ve been able to narrow down some with a google search but it has been slow going in getting some identified. There are always gaps in documentation on there and this is an area I saw that needed more! 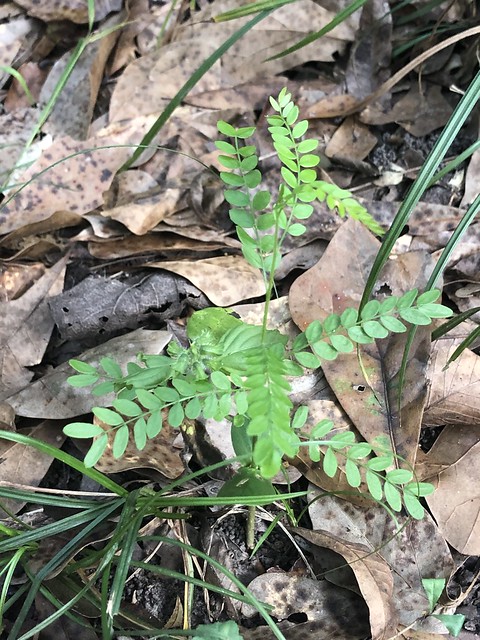 This little plant stumped me for a good while. On the surface when you first look, it seems like a spleenwort fern. Of course once you actually refocus and look at it you realize, nope, not a fern. I think it is actually a seedling water locust. There are several mature trees nearby and well, it is the only thing that made sense! 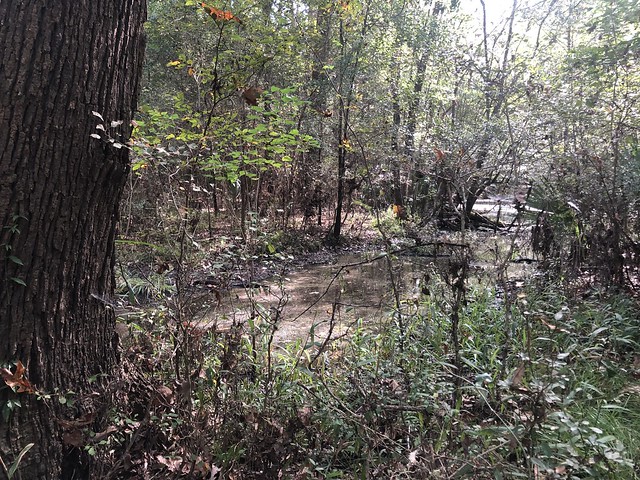 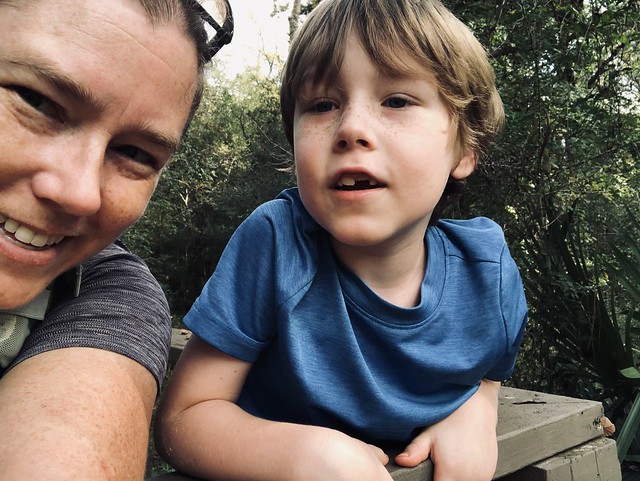 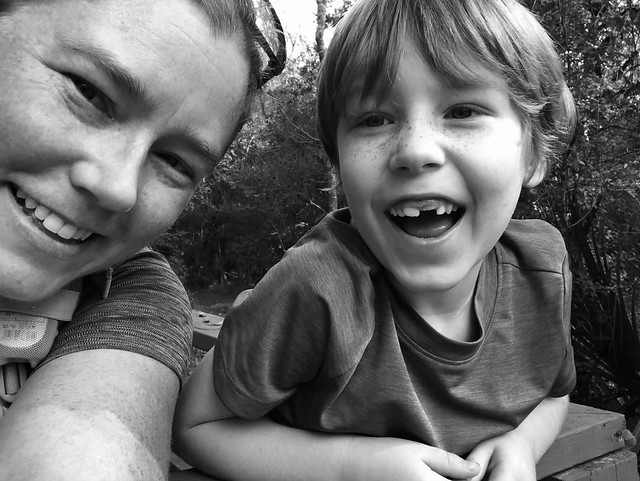 Forest wanted to play with various phone filters, so we had a bit of fun at a wetland overlook! 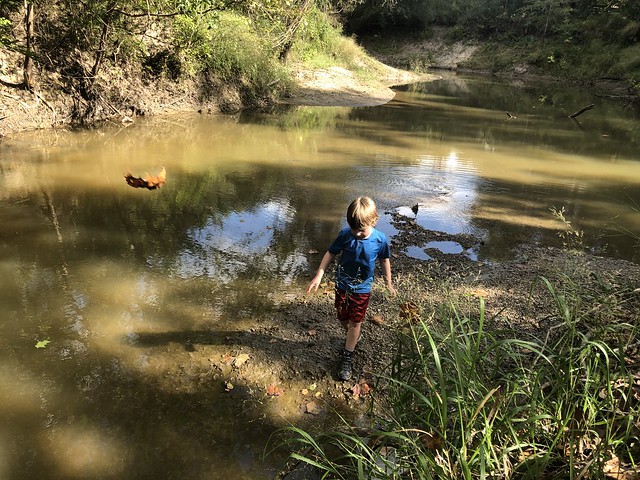 Forest can’t resist a rocky shoreline to play in! 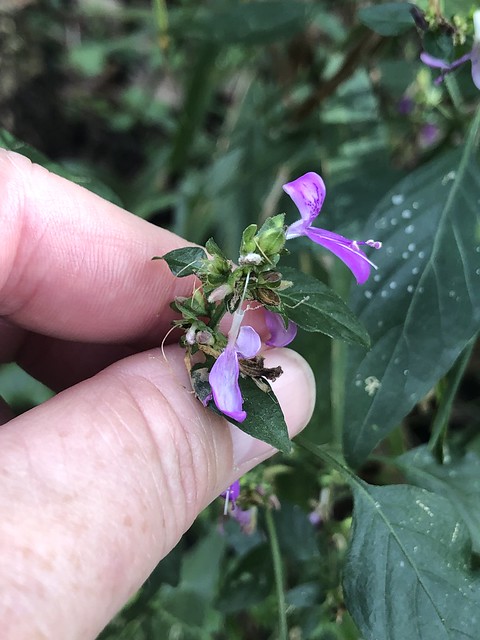 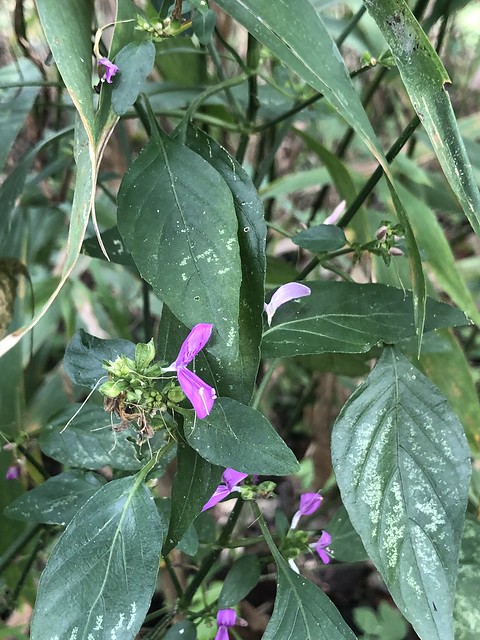 This was a new one for me but one I’d seen when identifying plants over on iNaturalist, False Mint, Dicliptera brachiata. 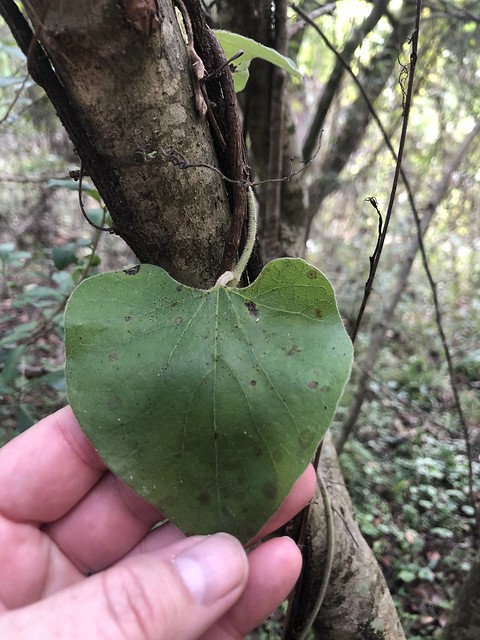 There are several great specimens of wooly Dutchman’s pipevine, Aristolochia tomentosa at this park and I’m hoping one of these days we eventually catch it in flower. 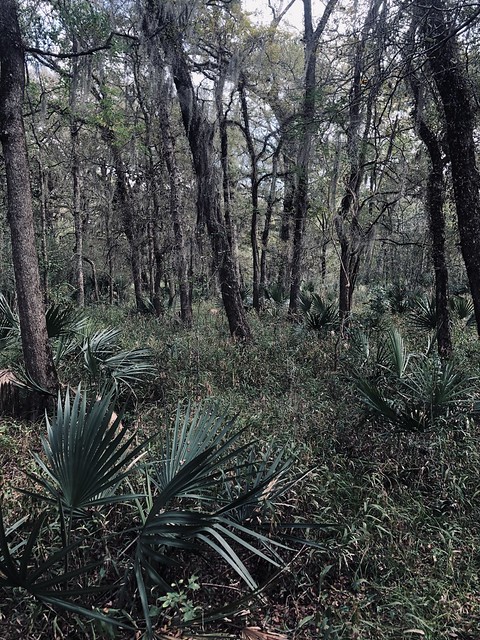 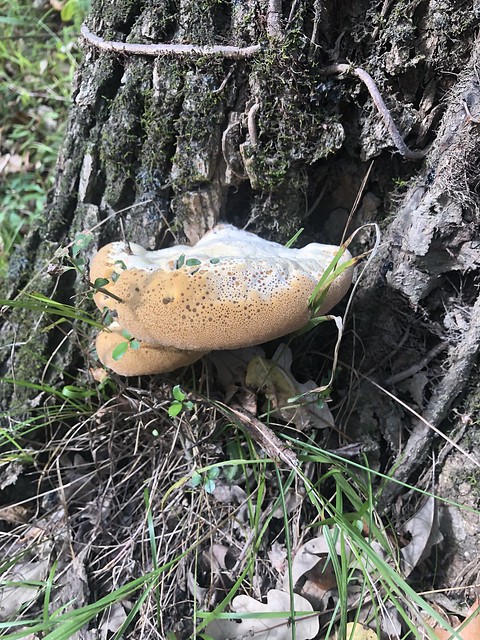 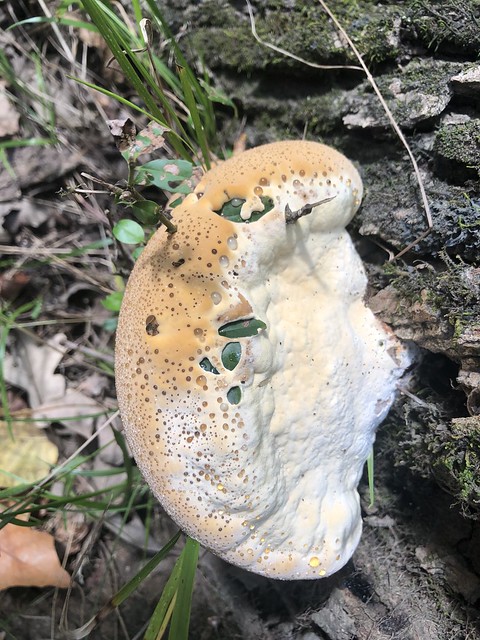 It absorbed and just “ate” the leaves that fell into it as it grew. I tried to pry them out—they were stuck in like super glue! 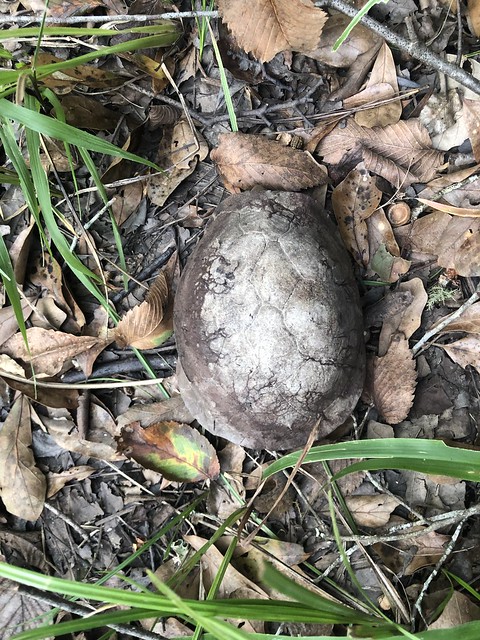 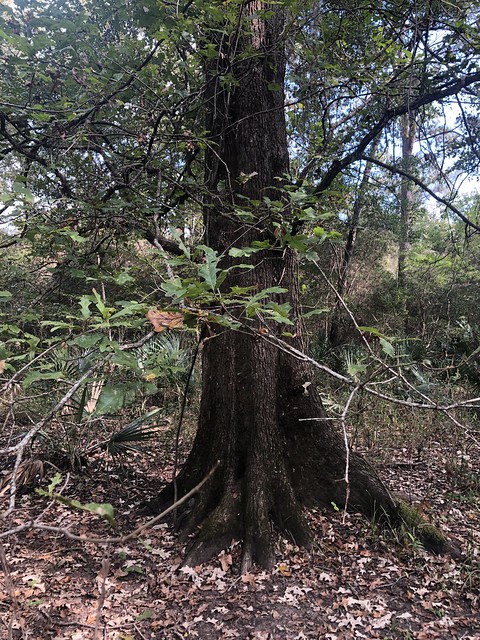 We got off trail briefly to walk through a dry wetland for a few minutes, where we found that box turtle shell. I’d love to explore more of this property off trail—I think it has some interesting delights waiting to be found! 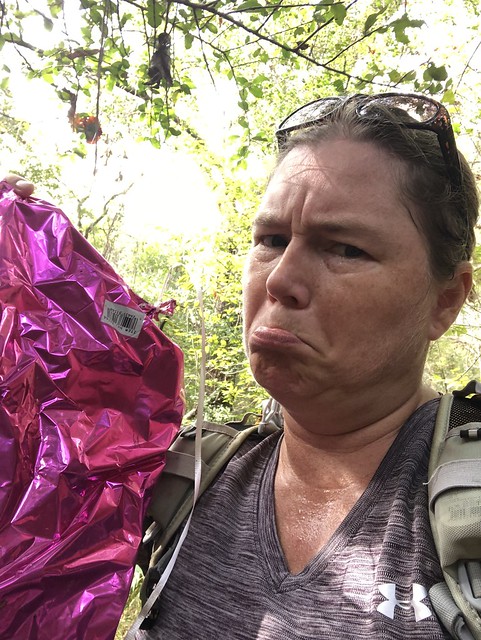 Unfortunately a non-delight found was a balloon. *sigh* I watched several balloons fly loose while driving home over the weekend from running an errand and wondered what natural area they would wind up in. Balloons are fun for kids—Forest loves them–but we’ve got to stop using them outside. 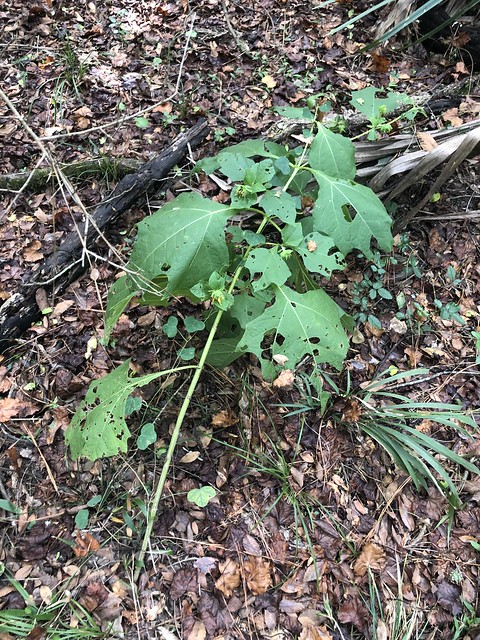 And lastly, the Bear’s Foot, Smallanthus uvedalia, the only one I’ve seen in the wild. They aren’t super common in Texas, though there are more sightings of them than the prostrate blue violet. They are much more abundant in the eastern half of the US. I knew to keep my eye out because I’d first seen it last summer and there it was, looking a bit ragged but hanging tight!

All in all a great bit of time spent outdoors. The garden beds are almost done. We have one more to pour and then it will be time to fill the remaining ones with soil and get new mulch in place. I’m ready for the break!