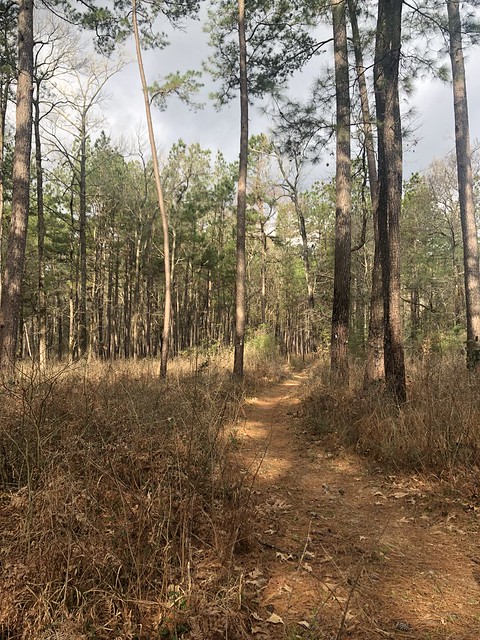 *write up is at the end of the post!* 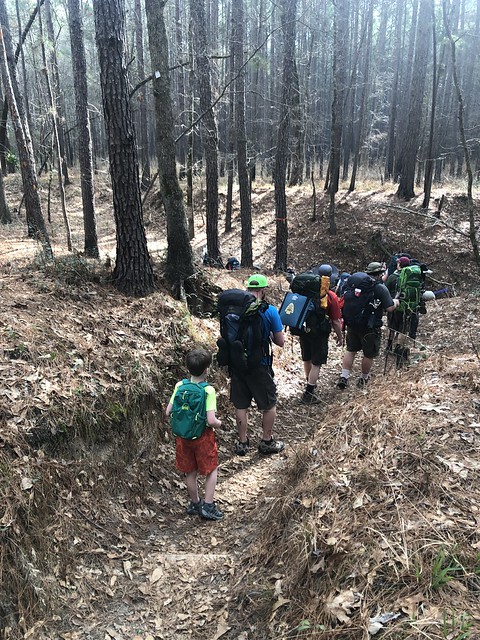 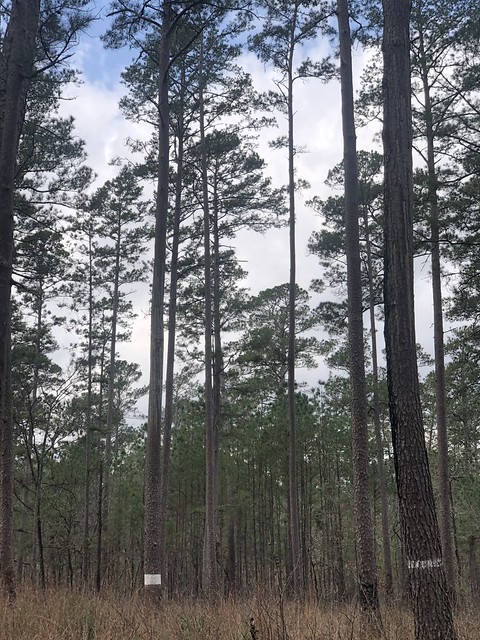 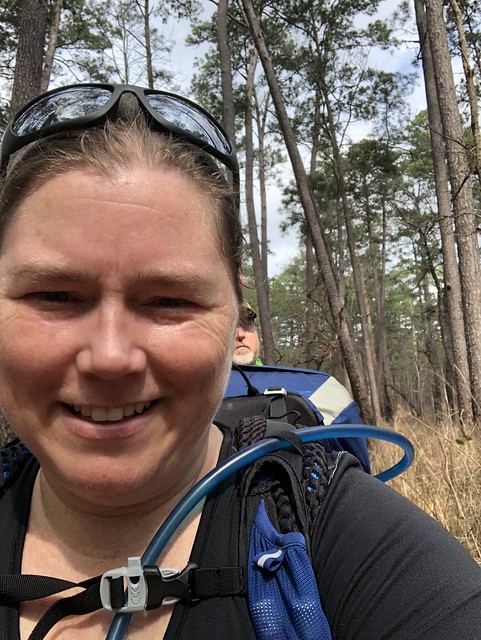 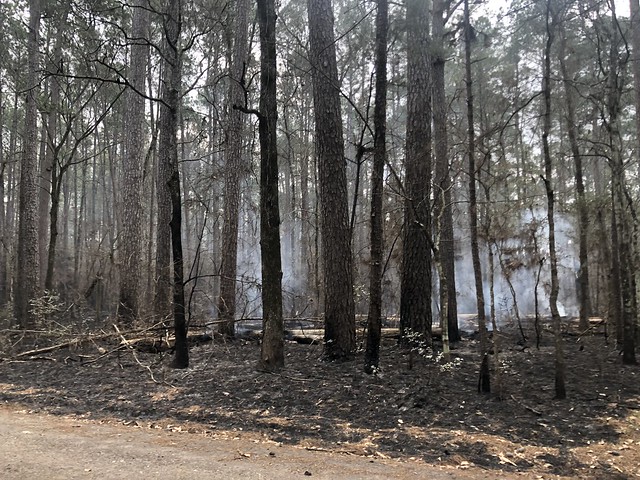 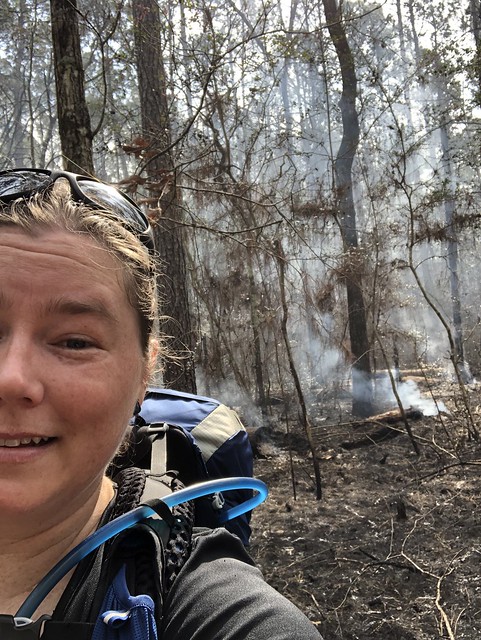 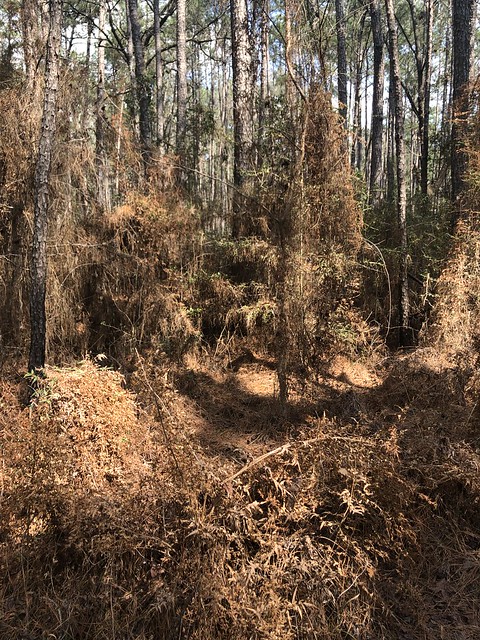 Japanese climbing fern, an invasive species, that has covered the forest here. They may have treated this area but likely it is only brown from winter freezes—it will definitely be back. 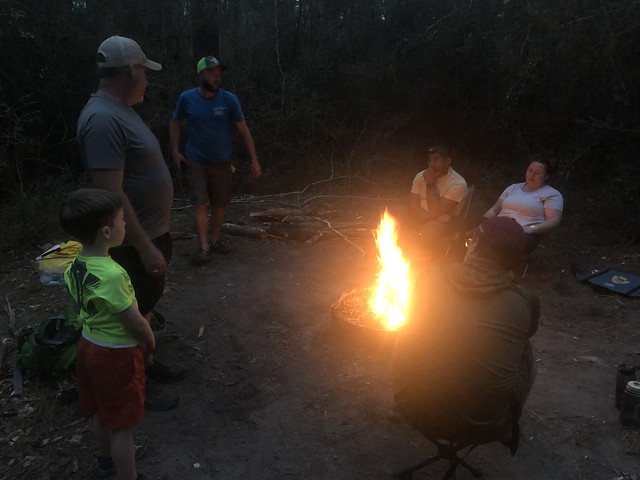 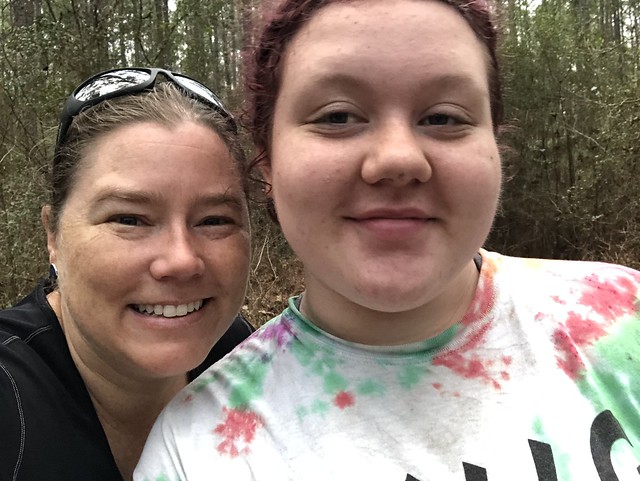 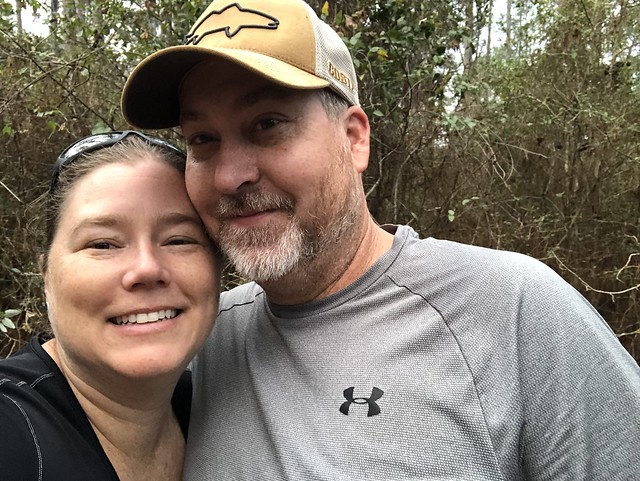 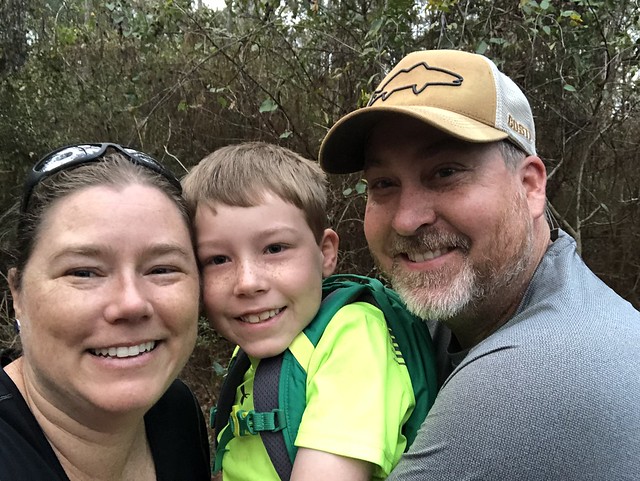 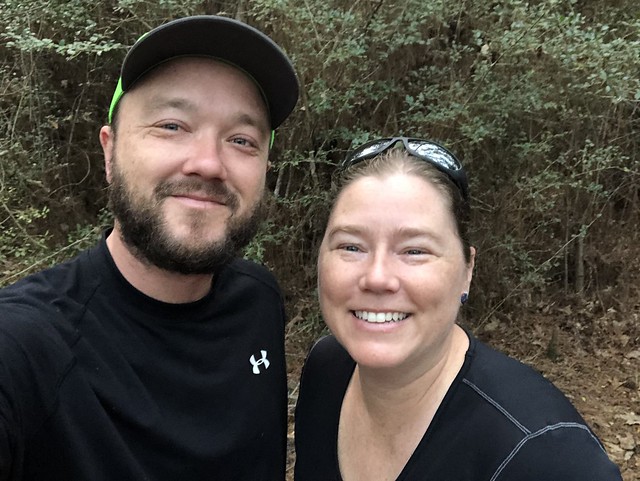 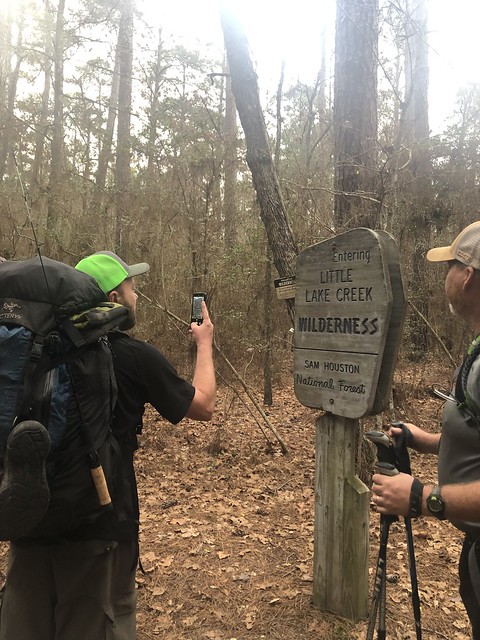 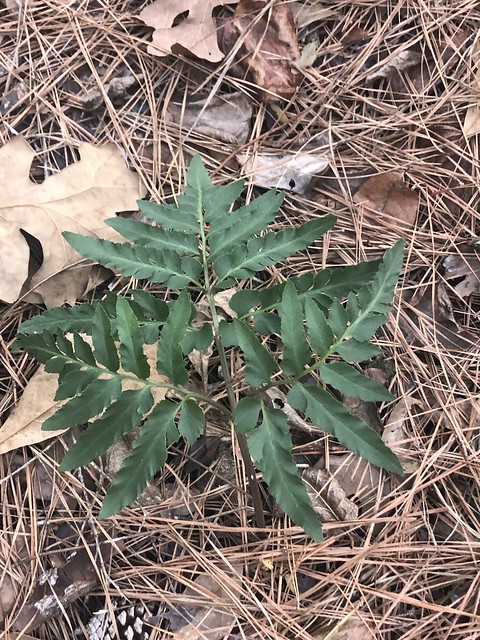 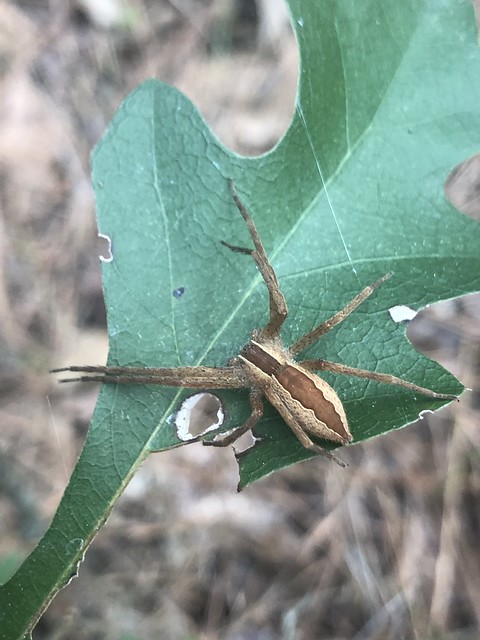 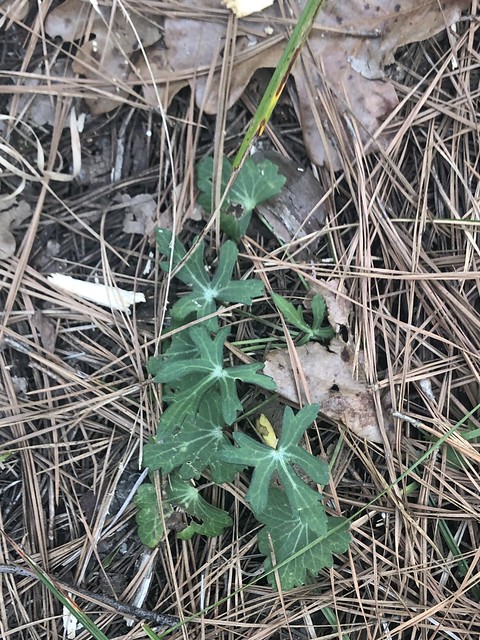 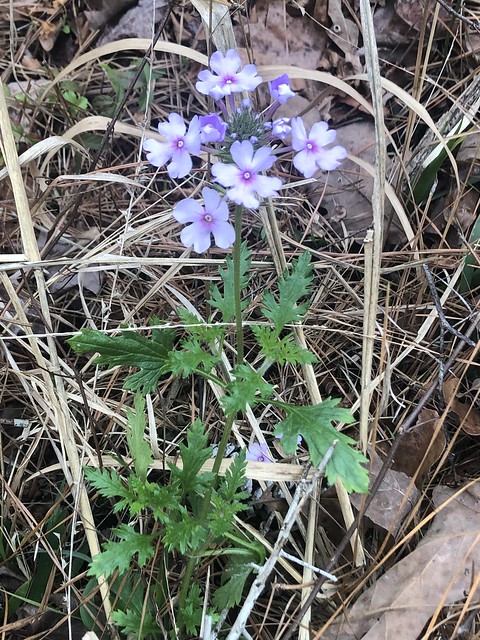 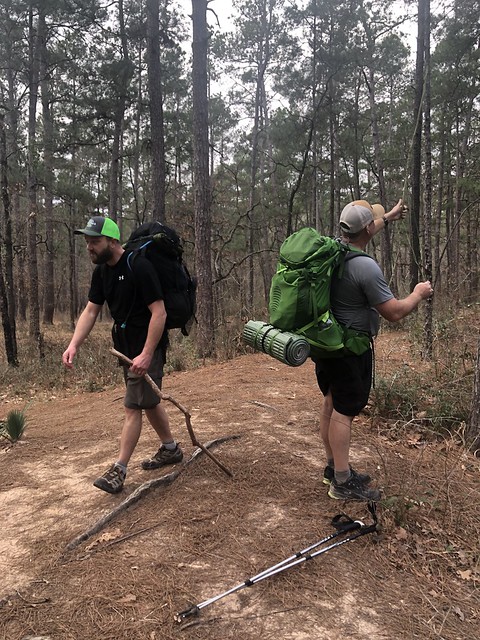 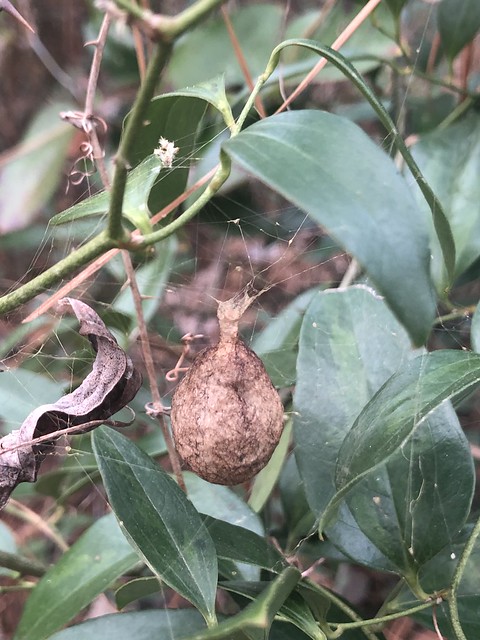 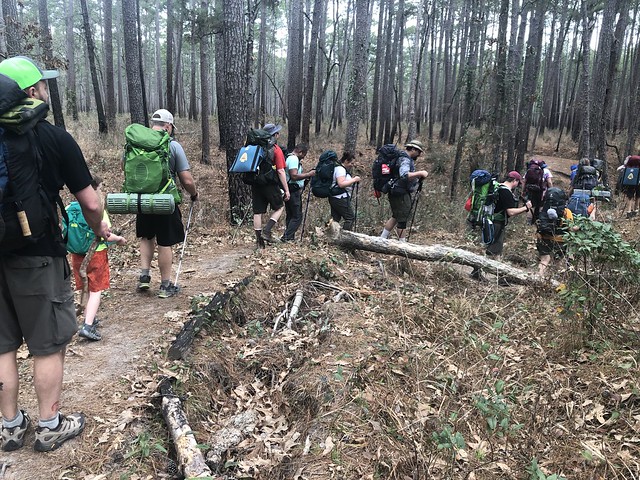 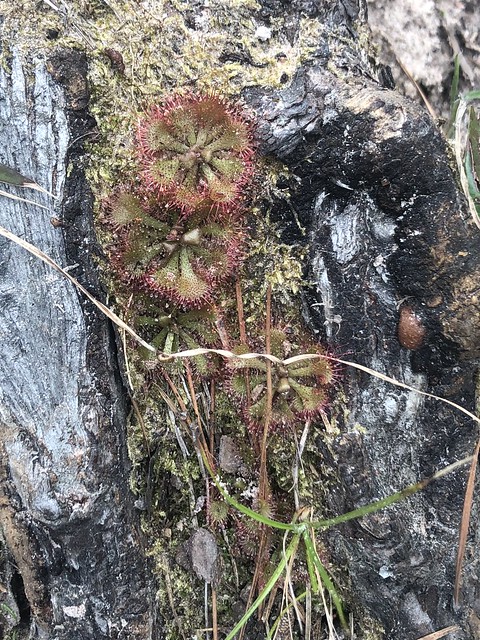 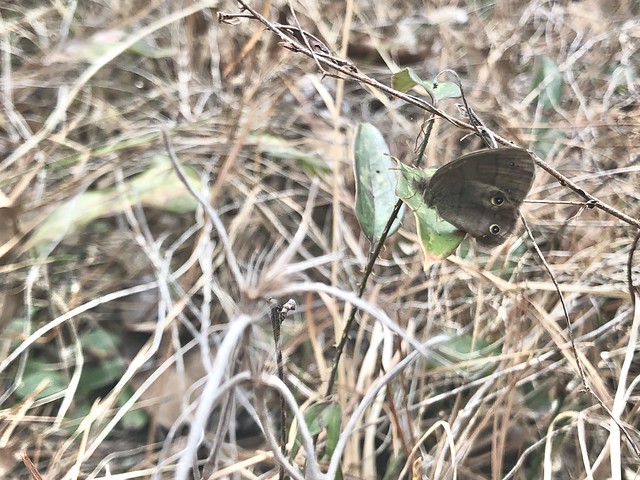 About a week and a half ago my brother texted to tell me that he and Zoe were coming down with her scout group to hike on the Lone Star Trail for a weekend and invited us to come out and hike. At first I thought we might only do a day hike but we decided to join the overnight hike and do the entire section the group was planning to do. It wasn’t quite a 12 mile loop but nearly so, combining the Richards Loop and the Sand Branch Loop from Trailhead 1 in Sam Houston NF.

We were supposed to arrive before the troop set out but apparently they rose earlier and got ready sooner than intended so we were behind them by about fifteen minutes. It was also a surprise for Zoe as she didn’t know we were even coming! We hoofed it out of the car and I sent a text to my brother after we passed the first pond to see how far behind we were and not long after we passed a hiker/hunter/old army guy who informed us that there were indeed a group of girls ahead of us. About fifteen minutes later we finally caught up to them! It wasn’t spectacularly hard to do with the train of girls stopping for various reasons from pack adjustments to water breaks. We made decent time, though, arriving to the campsite by lunchtime. We did end up coming across a still smoldering controlled burn. The trail itself wasn’t burned and was find to walk across and having walked across other burns before we knew it was likely safe to do so—and there were not closure signs on the trail head there at the road where we’d encountered it. A USFS vehicle was parked down the way but no one was inside it, though we did find USFS personnel on the other side once we’d finished the burn section.

The weather was sunny and warm and honestly, perfect hiking weather. Not too hot and not too cold. After sitting around at the campsite eating lunch we all set up our tents. The campsite wasn’t the nicest and frankly I was annoyed it wasn’t closer to or at the pond which was about a tenth of a mile south of the campsite. The pond was much more scenic. I mean, technically you could camp at the pond, there was plenty of space, but we all set up at the campsite anyway. The campsite was mostly socked in with yaupon and little tent sites had been cut away over the years further back, connected by various trails. It wasn’t terrible and worked fine, but certainly not high up on any list of “great backpacking campsites”, mostly utilitarian.

Several of the adult leaders had brought fishing poles knowing a pond was near the campsite and Chris kicked himself for not bringing the one he has for backpacking. Most of the group spent several hours at the pond, filtering water, fishing, and playing. I walked back and took a good nap in the tent for a while. Again, the perfect day for a nap in the woods! One of my favorite things is napping in the woods, whether it’s a mid-day lunch nap in some pine needle duff or tucked into the tent—either way, relish those naps. Chris and I switched out of on kid duty and he took a nap while Forest and I went back down to the pond to play, which is where you see some of those silly panoramic photos up there. It was also insightful and fun to listen to pre-teen and teenager girls and remember my own teen years. A lot of things change but many things stay the same!

Both Chris and I slept better than we did in December in the Wichita Mountains. Chris got a new sleeping pad, and I managed to sleep on my stomach, which helped a lot with my arms not going to sleep. Plus, it wasn’t cold! There was a slight threat for a light rain shower but it avoided us thankfully.

Everyone was sore the next morning and we finally managed to amble out of camp around 7:30. There were far more stops on the way back to the trailhead that morning, with the girls stopping for various reasons. Several girls weren’t doing great, one ended the hike in tears. Forest was pretty cranky too, complaining of sore feet and legs. I had to stop both days and give him liquid Tylenol along the way. He has done 5-6 mile day hikes with only minor complaints and 8-9 mile ones with a bit more complaints, but he was rather complainy on this hike. Needless to say, we were all glad when we arrived back at the car. I had a couple of blisters plus my arms had been rubbing against my straps on my pack, something I’ve had happen with this particular pack in the past but it seemed worse on this hike. I’m currently sporting a Band-Aid to keep it from rubbing on my shirts.

We were home by about noon or so and it felt like the perfect mileage to get out for a bit but also be able to get home and get some chores done before the week started. We were a bit early for many of the spring wildflowers and I was sad not to have seen any mayapples. They seem to be more prevalent on the east side of the forest than in this area. All in all, though, it was a good weekend hike and I’m glad we were able to make it happen! I don’t get to see my brother and niece very often, and while I didn’t get to socialize with my niece as I normally do because she was with her friends, it was still good to see her in her own element.

Here’s the map for this section: Section 1. We’ve hiked everywhere on this particular map and if you are looking for a good day hike, I recommend the Richards Loop in late April or early May for spring wildflowers or September/October for fall blooms. The North Wilderness Loop also makes for an excellent day hike.