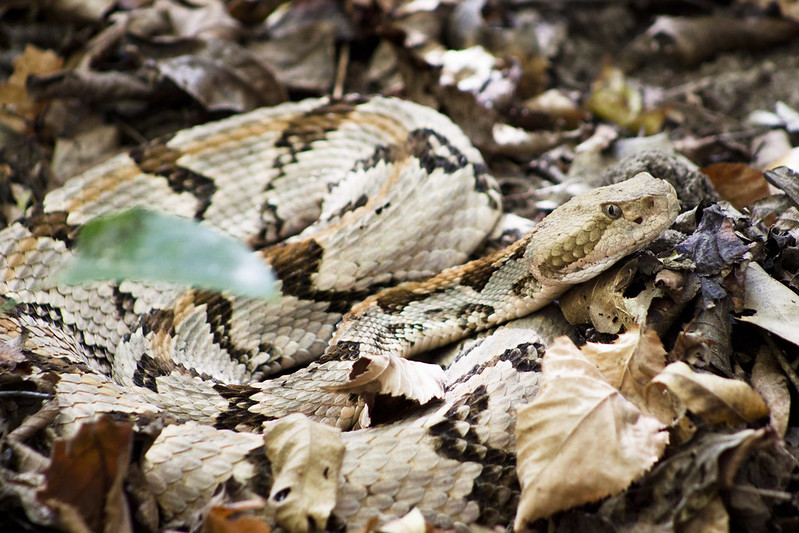 Back in early October we went to Martin Dies Jr. State Park for our first camping trip of the season. On Saturday morning we headed out for a hike on the Wildlife Trail in the Walnut Ridge Unit and found the trail fairly busy. In fact, it was bustling not just with hikers but folks heading out for paddling trips as a canoe launch is right there, too. Honestly, I was surprised how busy the whole area was considering it is typically pretty quiet in that area when we hike.

We crossed the big bridge over the pond inlet and weren’t too far down the main trail when suddenly Chris stopped and put his hand out for us to stop. Nestled amongst the leaves was a canebrake rattlesnake, Crotalus horridus! Luckily I had my long lens on my camera as I was holding out hope for butterflies to photograph and it worked perfectly for me to safely get some photos of this beauty. It was the first time Chris and I had seen one in Texas, though we had seen some along the Appalachian Trail on our hike in 2010, including one that had curled up next to my boots under a shelter in Pennsylvania. In that region they are referred to as timber rattlesnakes.

It was both good and bad that the canebrake chose to chill out a few feet off the trail—good for us to get to see it but bad because other, less snake friendly people might see it. As I mentioned, the trail was busy. There was a good chance dozens of people had already passed this snake that morning without anyone noticing it, especially coming from the opposite direction we were walking. Unfortunately there was a large group of people with several small kids right behind us and some of those kids were bounding down the trail. We stopped them and had them wait for their parents while we cautiously pointed out the snake and let them pass by.

Not wanting to linger and draw more attention to the snake, we moved on, hoping that the snake managed to evade a bad encounter with humans. Like every other snake, their habitats are threatened and humans are their biggest problem. It was certainly the most unexpected and exciting wildlife encounters we’ve had this year!