Dr. Christine Blasey Ford. May all of our daughters grow up without her trauma but with her strength.


I’d like to add that may we raise our sons to assist us in dismantling the patriarchy and misogyny that currently guides our society.

Basically my same response when Lindsey Graham went down his spiraling tirade today.

That is all. I spent the afternoon listening to NPR and I wish I hadn’t. I hadn’t planned on listening to any of it until I was in the car at lunch and Dr. Ford was on and well, that was it for me. I was in it for the long haul.

Gardening:
I’m looking forward to the slowing of growth, less weeds, and time to chill out. At the same time I’m also trying to plan, prep, and sow fall crops, think about sowing seeds in the flower garden/pots that need cold stratification and letting nature handle that this year, and flagging all sorts of seeds at Prairie Moon Nursery online in hopes they will have their $2 seed packet sale sometime in the next month so I can order a bunch of seeds. Their seeds are still relatively affordable at $2.50 a pack but dropping down to $2 makes it even more enticing.

Loving:
+The ‘Friends of the Library’ sale shelves at the library. Bought a few magazines and a book for Forest today when I returned a book and picked up some holds.
+Tea season!
+How much Forest loves coloring right now!
+My arm muscles! I’ve been working hard on lifting weights the last few months and I’m starting to see some results.
+The lavender hydrosol spray from Gayla I bought a few weeks ago. I bought a trio of them and am loving the lavender one the best.
+While I’m in that vein, my essential oil diffuser.
+My son’s flair for the dramatic—he said “You ruined me!” after apparently I talked over him while washing up in the tub and he supposedly had something to tell me, and when I asked him to tell me what he wanted to say he replied with that as he flailed over on his side in the tub! 4 year olds.

Reading:
I’m not reading much. I have a stack of magazines I need to wade through and intend to get through them all when we’re camping soon. I’ve been reading a book for over a month on my Kindle. It’s a slow reading season.

Making:
I’ve been doing some tiny art pieces recently, just a couple. And I’m trying to get back into the studio more often again. We went a few weeks without going over there. But, the routine is coming back.

Watching & Listening:
TV season has returned so I’m watching…
Better Call Saul: I was behind but finally caught up on my recordings. We’re really heading into Breaking Bad territory and I’m just waiting to some kind of oddball Walt or or Jesse cameo.
The Big Bang Theory just started again and the first episode of the season was pretty good. I’m guessing Neil Degrasse Tyson is replacing Stephen Hawking as the famous scientist to cameo a few times a year.
This is Us: good opening episode of the season, I’m dying to know who they are going to see in the future scenes they have.
Grey’s Anatomy: This one starts tonight so I’ll watch is whenever I get a chance.

That’s about it for this month. Camping season kicks off this weekend for us and I’m very excited about spending some time in a tent once again! 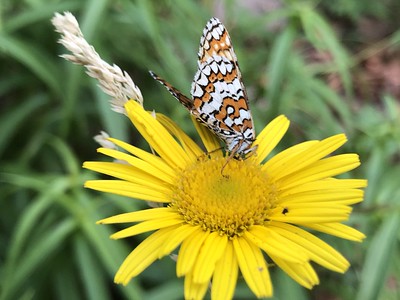