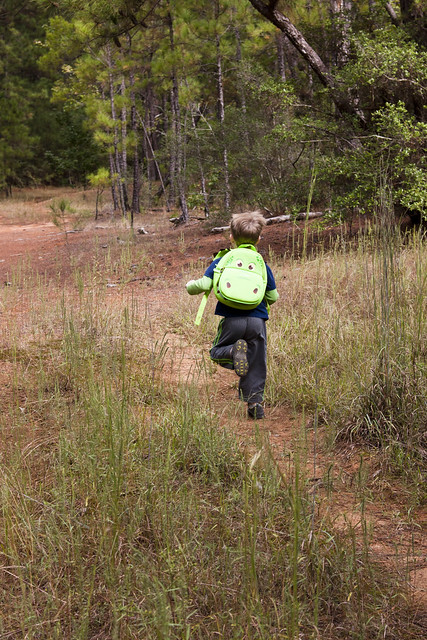 A few weekends ago we went bushwhacking in Sam Houston National Forest again. You may remember our hike last year while attempting to look for the Bartonia texana. It was coming up on blooming season for them again and we hadn’t been hiking in quite a while (and haven’t been hiking since!) so I mentioned to Chris that we should try once more. 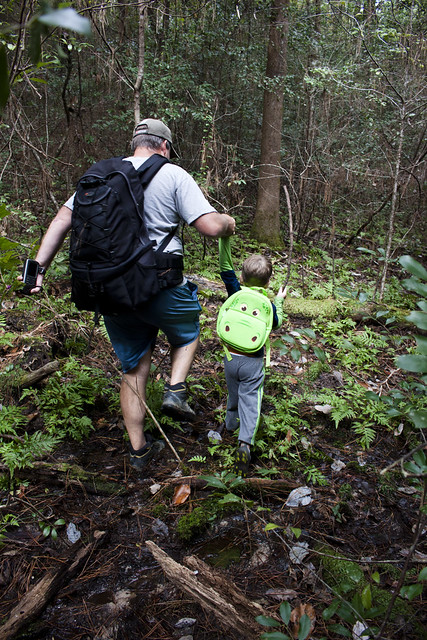 This year the weather was warmer and the sun was shining. Forest was a little more upbeat for this hike than last year since he was already familiar with where we were going. 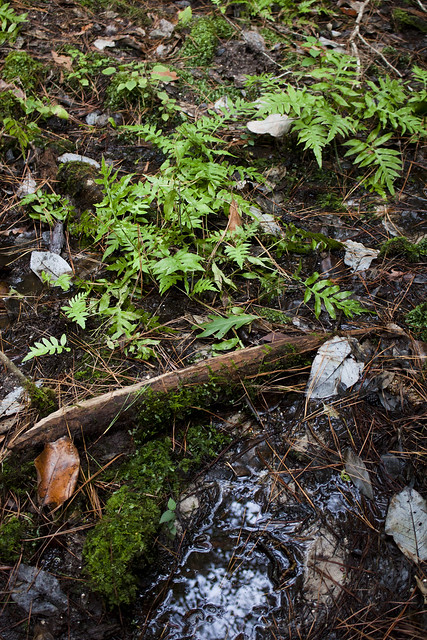 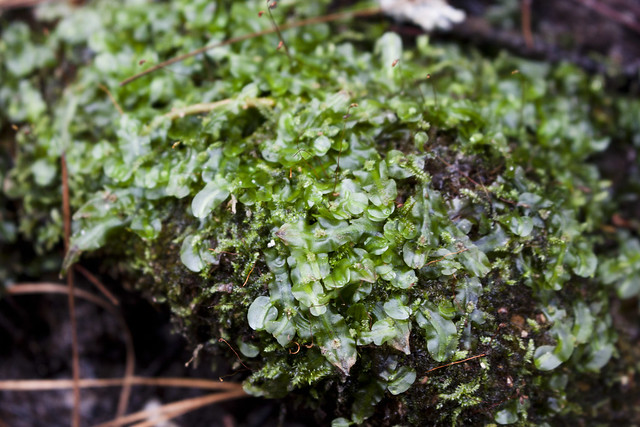 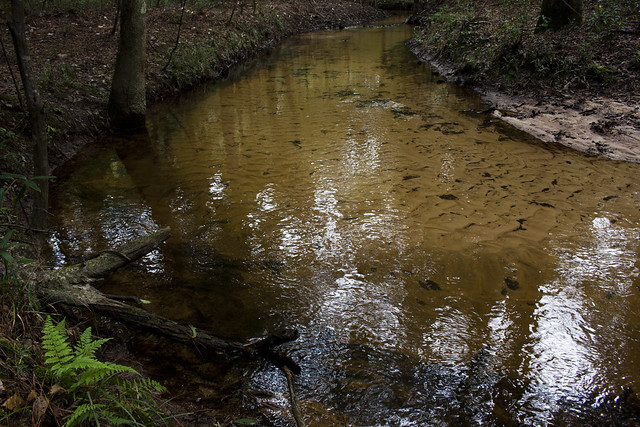 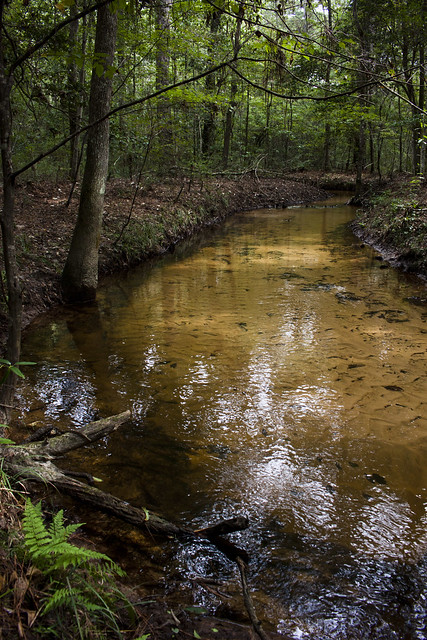 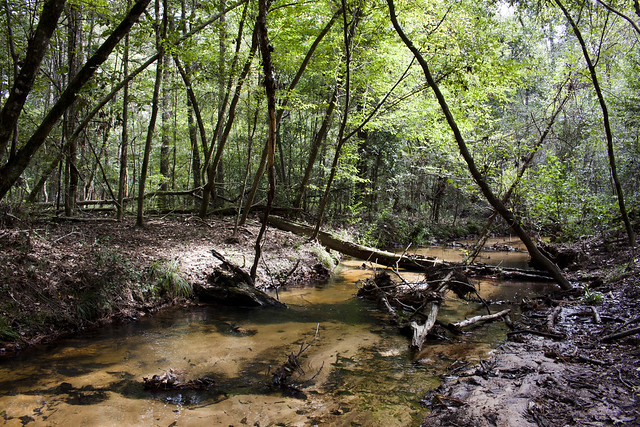 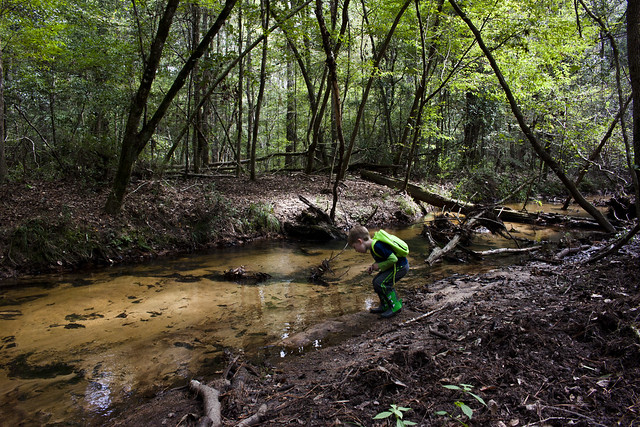 We reached the creek and it was lower than last year. We could easily walk across the creek if we’d decided to as there was minimal water. Compare this year in this photo versus last year in nearly the same location.

Forest once again inched towards the water, peering in to see what he could play in. I wish I’d brought a change of clothes for him out there so he could have really just had fun along the creek. We had his mud boots but that was it so I didn’t want to risk him getting totally soaked. 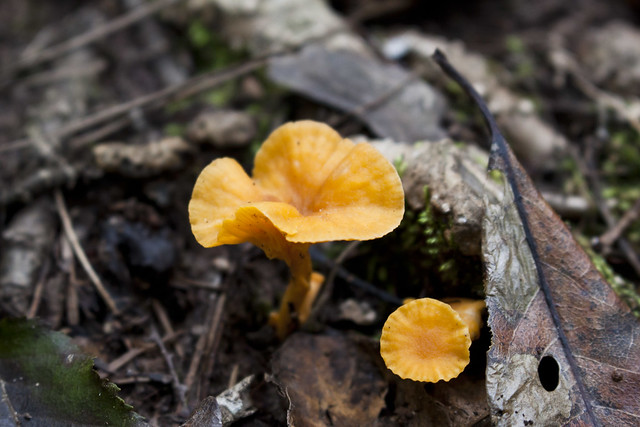 Some kind of chanterelle, Cantharellus sp.. The mushrooms were on point this year just as they were last year. 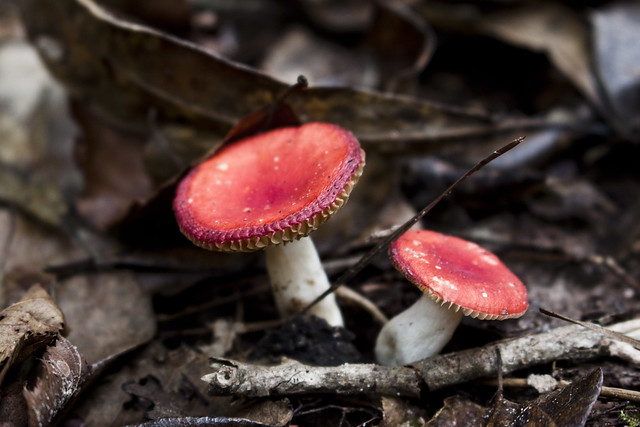 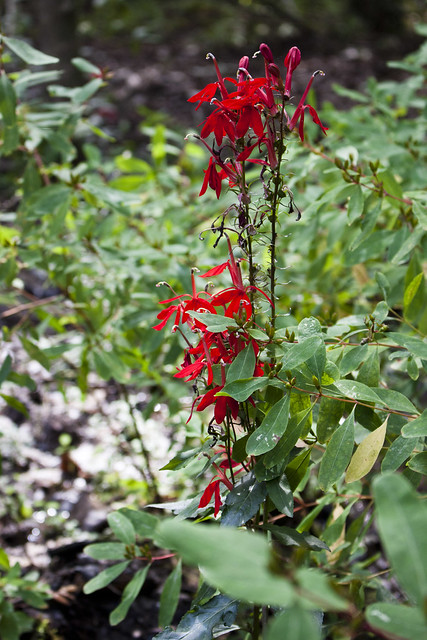 The cardinal flower, Lobelia cardinalis, was much nicer this year with better blooms than last year. 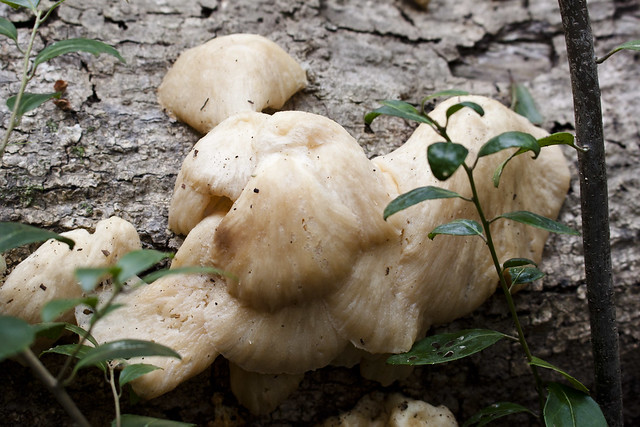 I have no idea what fungus these are but this log was covered in them. They are very cool looking! I’m not sure if this is the end of the fruiting body cycle and they are flopping over or if this is their usual state. Someone advise! 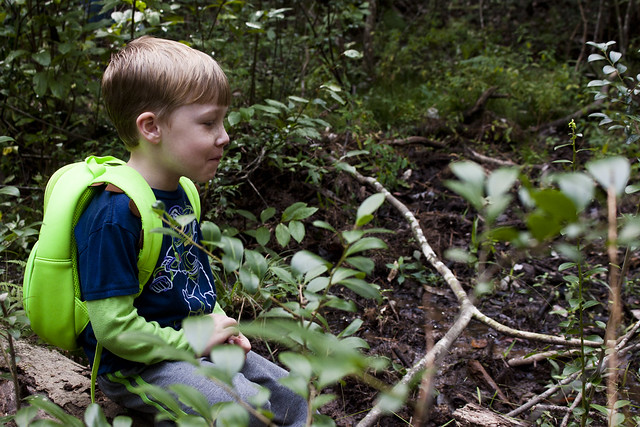 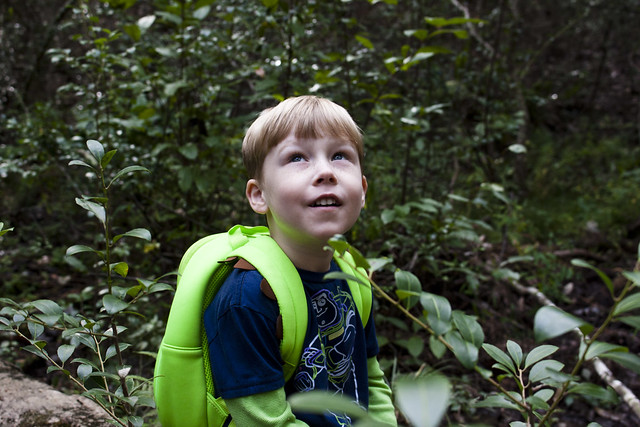 It was lunch by the time we had arrived at the creek so Forest and I found a log to sit on and enjoyed our Subway (me) and jelly bread (him) and assorted snacks to go along with it. 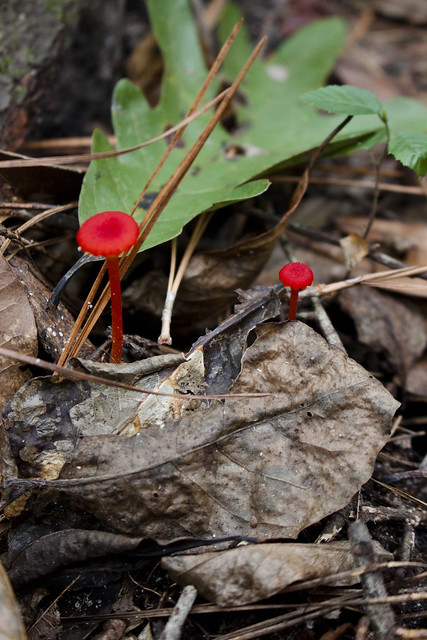 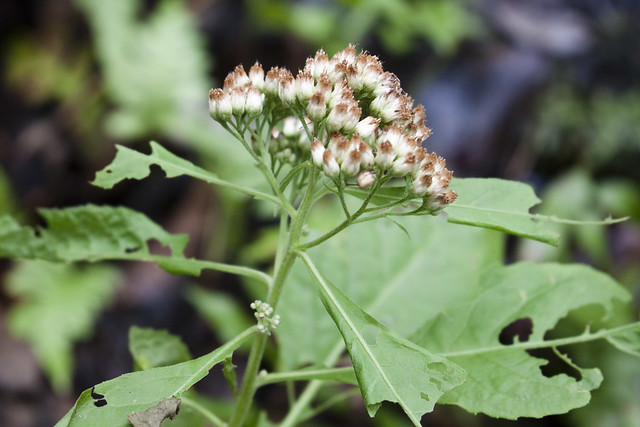 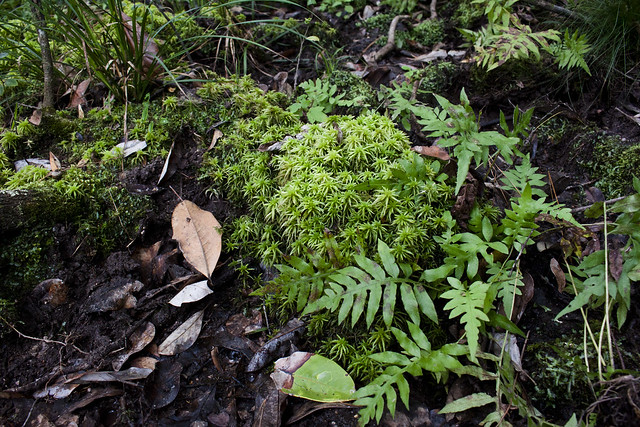 What I love best about this boggy creekside are of course all of the mosses and ferns and tiny still-life scenes. 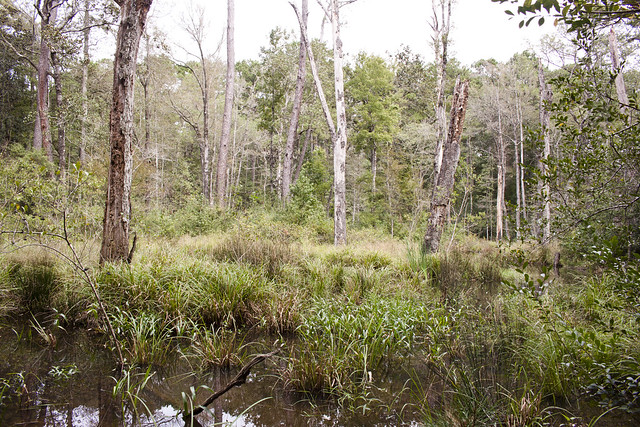 The creek widens at one point and opens up into a marsh where you can see remnants of pine and hardwood trees that once dominated an area that was at one time drier than its current state. 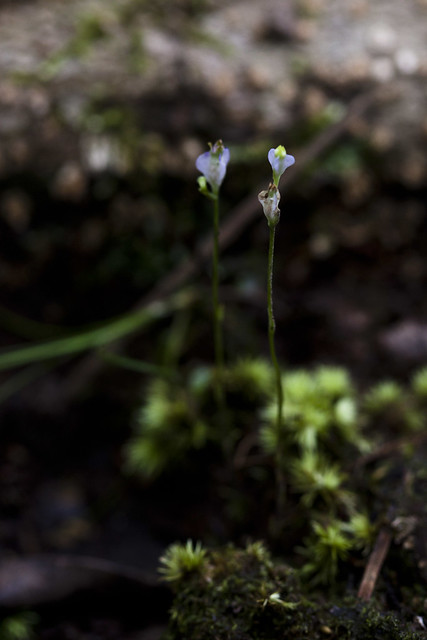 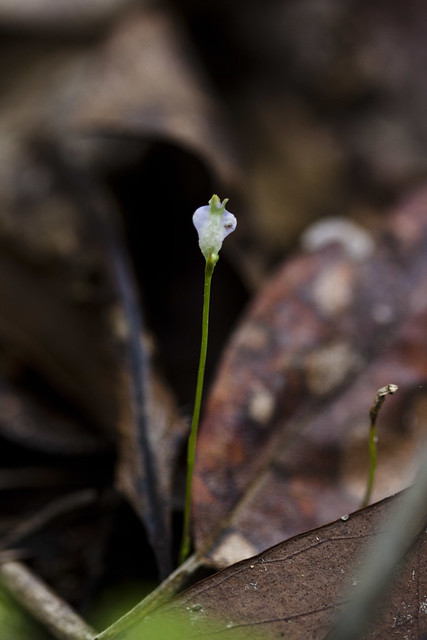 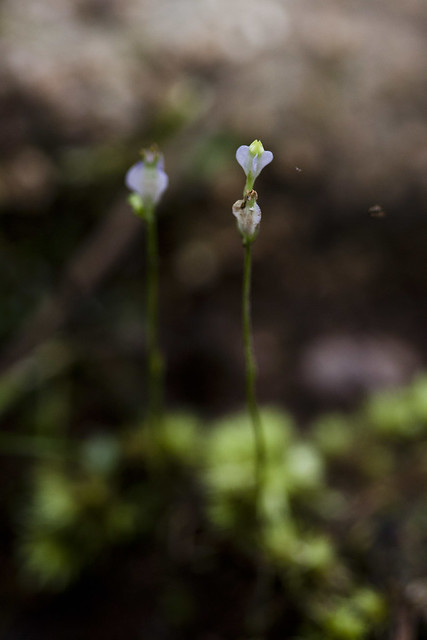 Chris and I had both been trying to poke around the creek edges looking for the Texas screw-stem, within eyesight of Forest sitting on a log up slope but Forest didn’t want me going too far so I came back to entertain him while Chris was looking around. The goal was to switch out every so often so we could search with fresh eyes and hang with Forest. While Chris was looking he found something else, a different plant that he hadn’t seen before but only knew about because a friend of ours in Florida had recently come across it. He wasn’t even sure if there was even a sighting here in Texas. Eventually the name came to him, Northern Bluethread, Burmannia biflora. I managed to find some signal and opened iNaturalist to see what the records said—three in Texas, 1 each in Alabama, Georgia, and South Carolina, and the majority (but still not a ton) sprinkled across Florida. Definitely a rarity.

That said, consider its size and habitat. I should have put something up for comparison but the plants were maybe 3-4″ tall and if they weren’t in bloom you would have just thought they were sticks of nothing. Chris found two clumps and he didn’t directly take me to them, only pointing out the hummock one of the groups was located on, and after my eyes finally focused I was realized you really had to be looking to find them to even see them. I never found the second clump even though he told me which hummock it was on! So, you have a diminutive plant residing adjacent to a creek in a boggy area that also includes hillside seeps—not really a place many people are hanging out to look for plants, right? So while the sightings may be rare there’s likelihood that this plant is more abundant than noted. 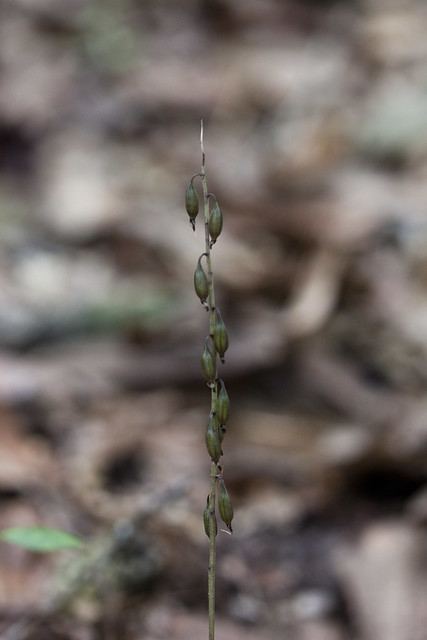 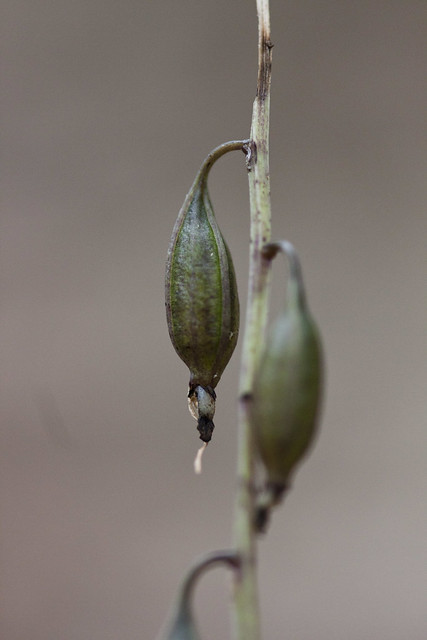 While walking down to the northern bluethread location I stumbled across an orchid in seed, a Crane-fly Orchid, Tipularia discolor. I stuck a stick next to it so I would be able to find it when I came back up slope but of course it still took me a few looks to find the stick and the orchid. 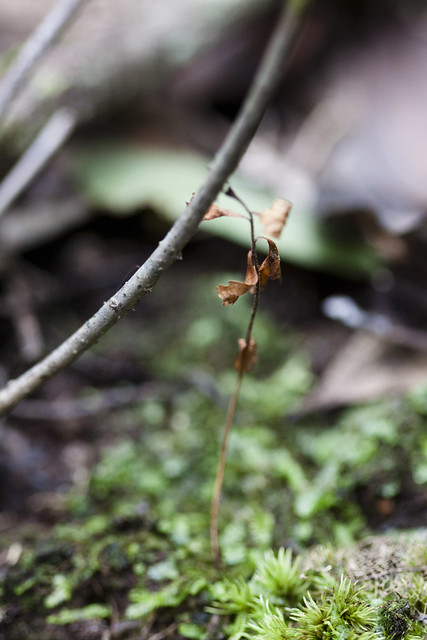 Later, I went walking further down to another area and found this fading plant. I thought it was a tiny stick stuck in the moss but I tried gently tugging on it and it was definitely a plant of its own. A bluethread that’s faded? Something else? I’m not sure. 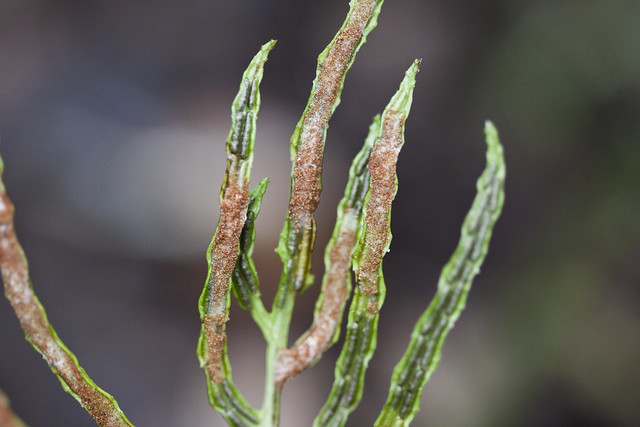 A fertile frond of the netted chain fern, Woodwardia areolata. 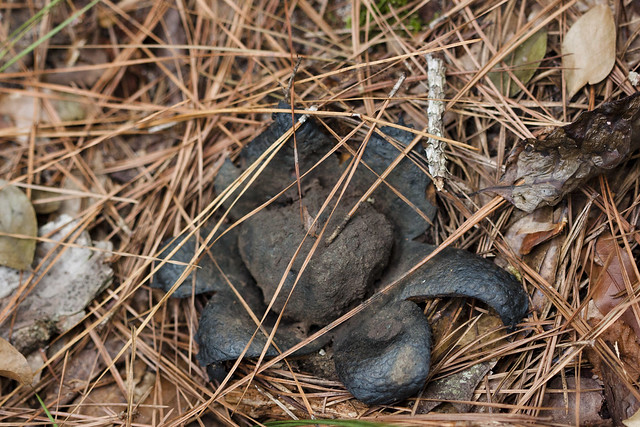 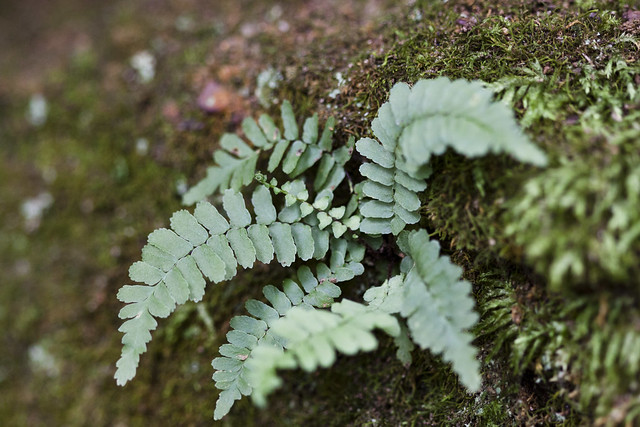 While Chris finished out the last bit of time searching for the screw-stem, Forest and I trekked up the side of the hill a bit to the rocks we found last year. I checked on the ebony spleenwort and of course Forest found the rocks to be excellent climbing and jumping structures to play on. 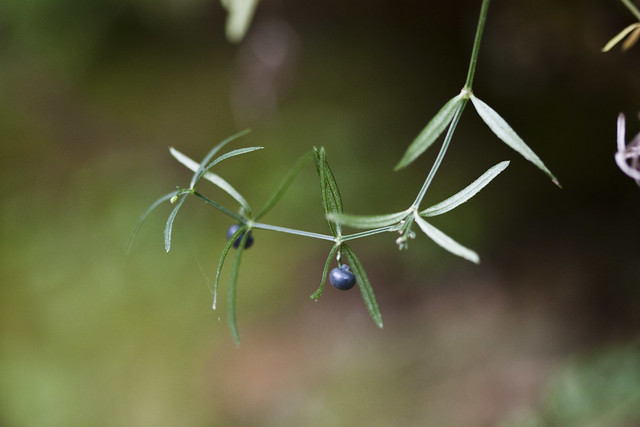 I think this is some kind of bedstraw, Galium sp.. It was clinging to the dirt caked into the rock and dangling from that.

Another bushwhacking trip in the books but again, no Texas screw-stem. Though, finding the northern bluethread was a good highlight and something you don’t come across every day. 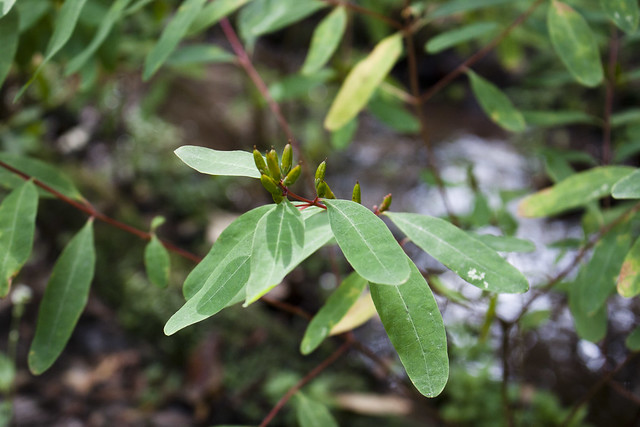 Hey, I figured it out by happenstance–Greater Marsh St. John’s-Wort, Hypericum walteri.