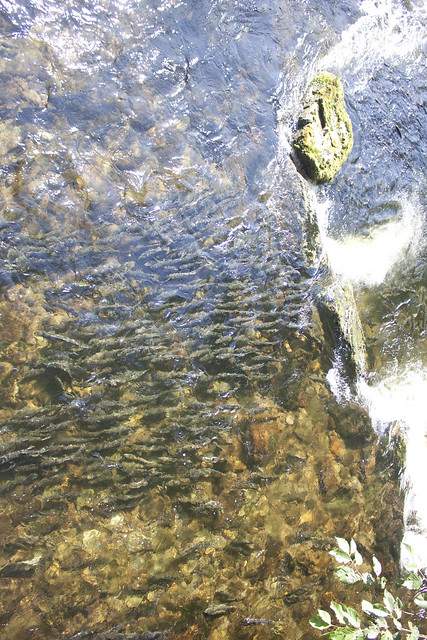 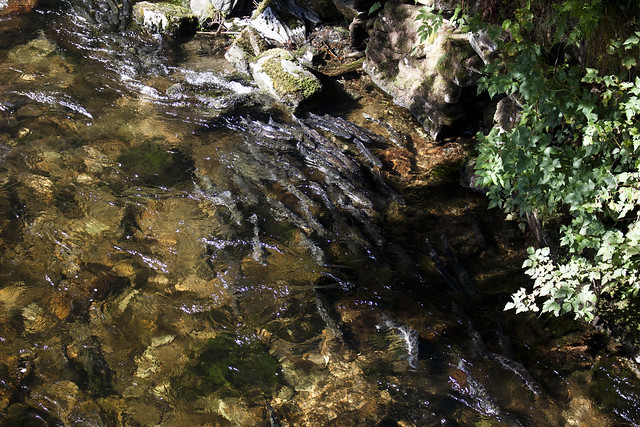 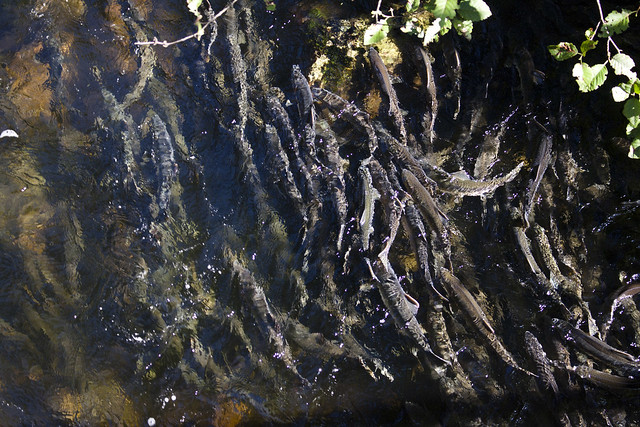 After our hike at Carlanna Lake, we called a taxi and told the driver that we wanted to see the salmon run and ladder in town. She drove us to Deermount Street at the north end of a city park and sure enough, there were plenty of salmon in Ketchikan Creek. We got out and paid her and then watched the fish for a while. Forest wanted to play in the park nearby so we walked over and scouted that out while Chris finished oogling at the salmon. 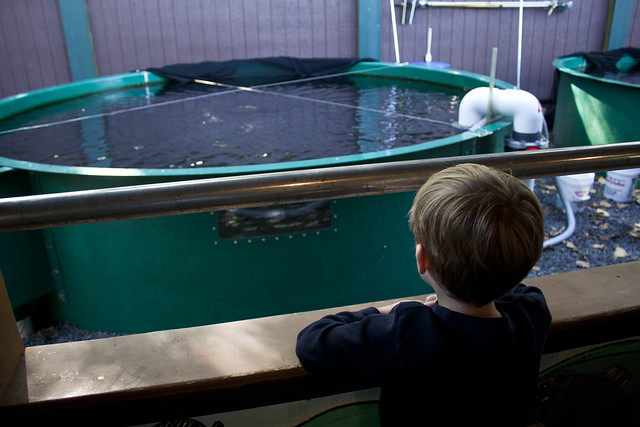 At the far end of the park is the Deer Mountain Hatchery which was open to the public to view and learn about salmon and the hatchery. 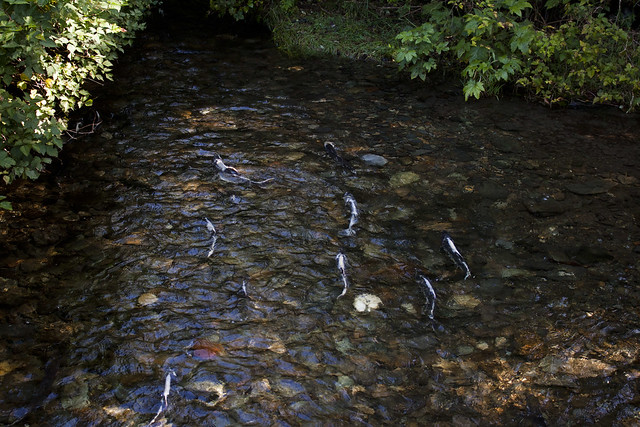 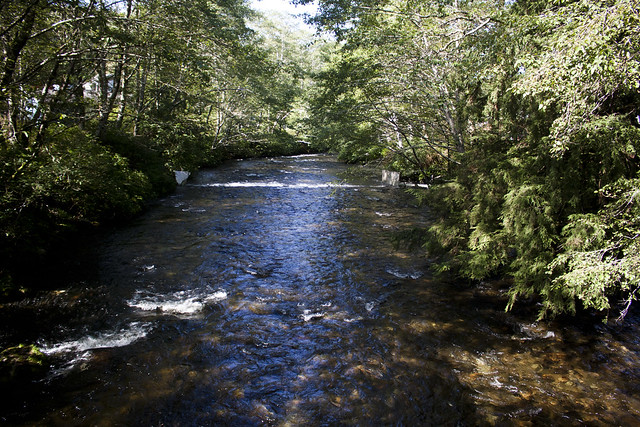 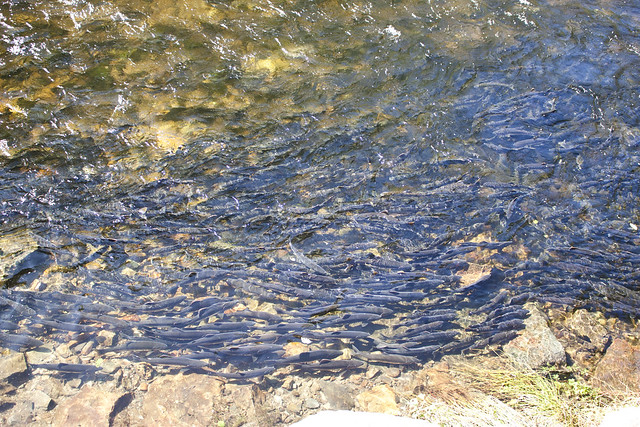 We stopped at the Totem Heritage Center next, but that will be a separate post. After visiting the center we then had to find our way to ‘downtown’ Ketchikan. Roadwork was being conducted on some of the streets right around that area and we were forced to try to figure out a way around it after talking to workers who suggested we try to find a small trail that follows the creek into town. After getting a bit lost we managed to find it behind the skatepark on Park Avenue. It was a peaceful walk that eventually dumped us back out onto another street with houses and we roadwalked from there over to town where we made a beeline for Annabelle’s. Our taxi driver had recommended it to us and we were not disappointed. It was my initiation into salmon chowder and is still the best salmon chowder I had in Alaska. Mmm, I could go for a bowl now! 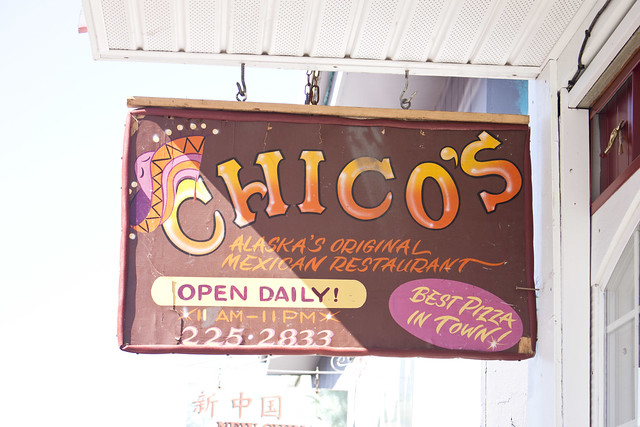 I got a kick out of this sign—first the idea of Mexican in Alaska but then that it also served the best pizza! 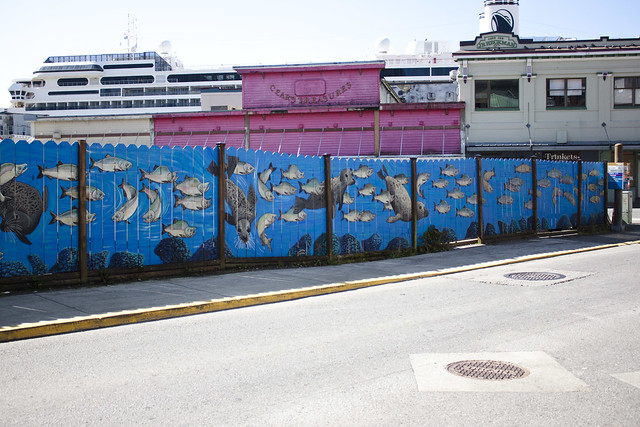 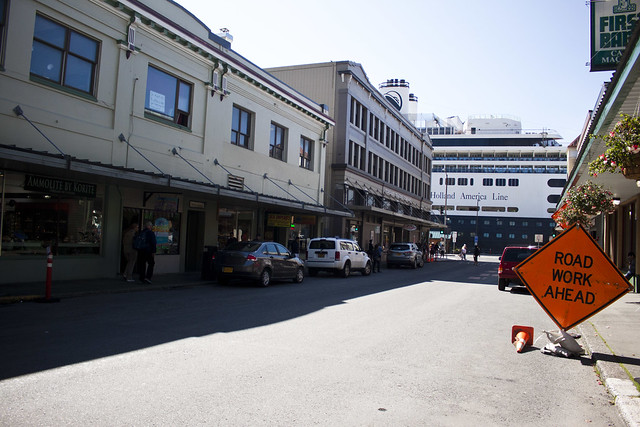 Ketchikan was very walkable and easily accessible for the cruise ships as you can see in the two photos above. Our boat was a bit further to the west but still not very far from the main part of town at all. 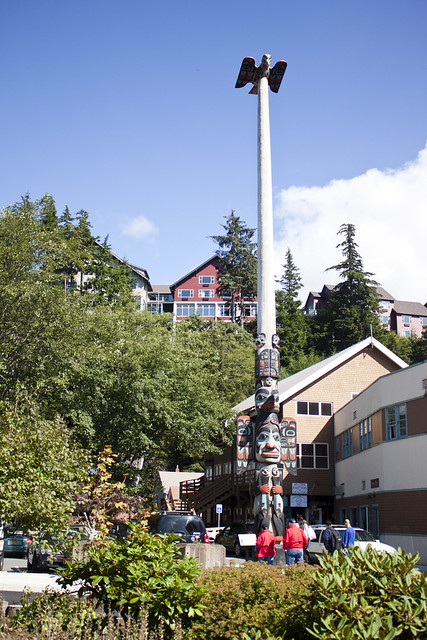 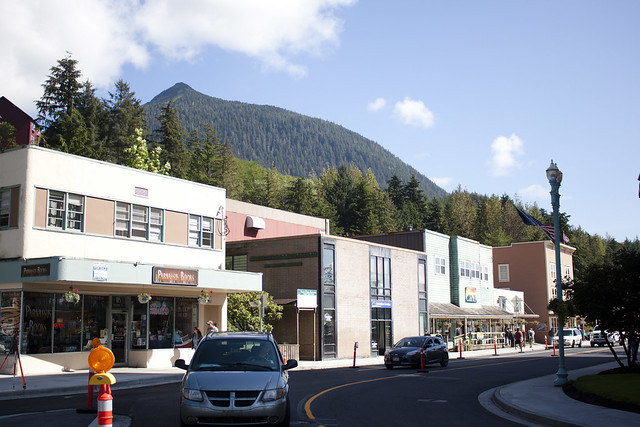 After lunch we still had several hours to walk around town, shop, and sightsee. This town wasn’t nearly as bad as Juneau and Skagway, but what is up with the gold and diamond jewelry stores in port towns? I remember seeing that somewhat on our honeymoon cruise to the northern Caribbean but I wasn’t expecting that here. Juneau was the—well, maybe Skagway was the worst. They were both bad on that front. Who goes on a cruise and says, “Let’s buy some jewelry that I can buy at any jewelry store in a mall back home!” ? It was weird.

That said, we did find some neat local shops and I wished I had bought a few more locally created art or jewelry pieces when I saw them. I kept thinking I’d run into more but really never saw a wide selection of that. 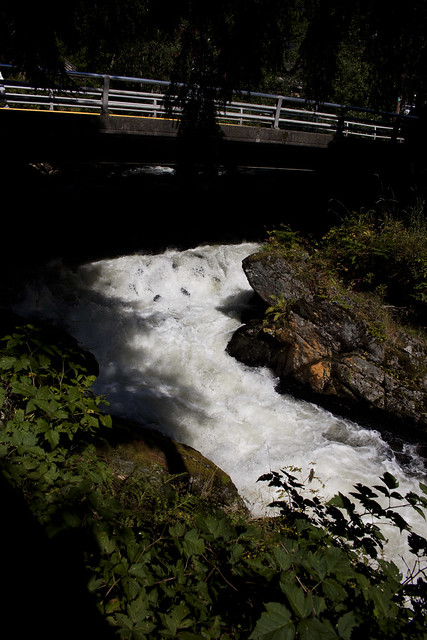 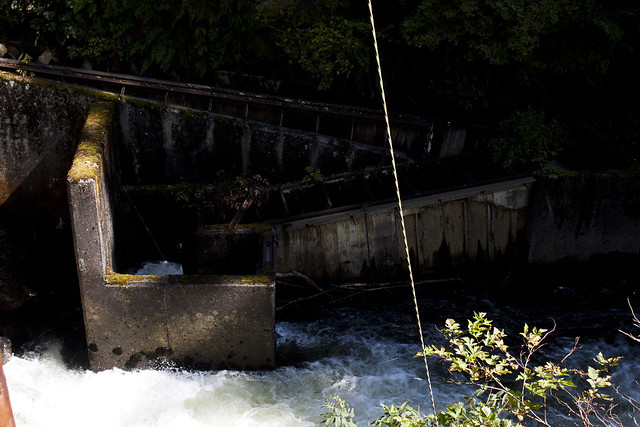 Eventually we found our way back to the lower end of Ketchikan Creek and watched the salmon jump upstream but also use the salmon ladder, too. 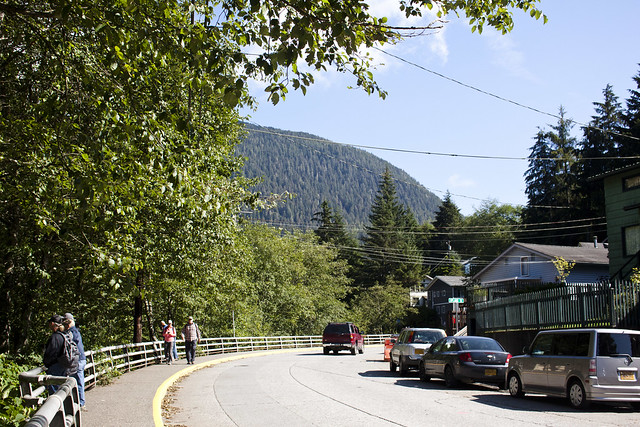 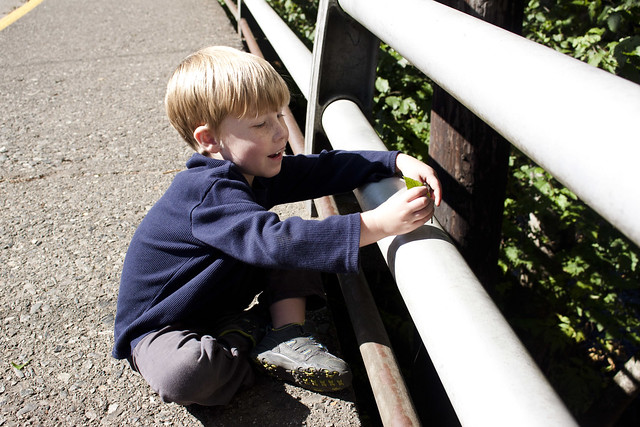 The weather was absolutely perfect—a slight breeze with the sun shining and not too cold or hot. A perfect fall day for salmon watching. 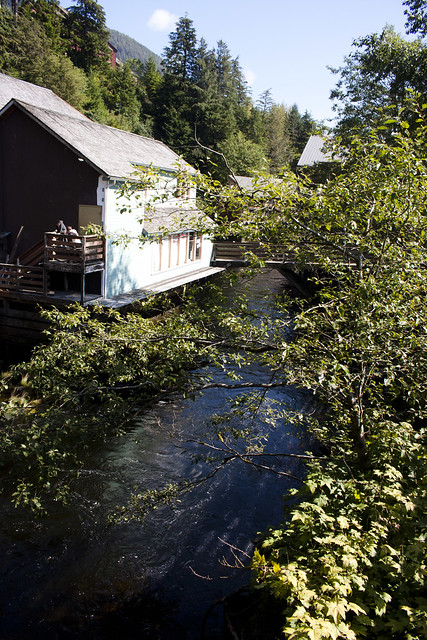 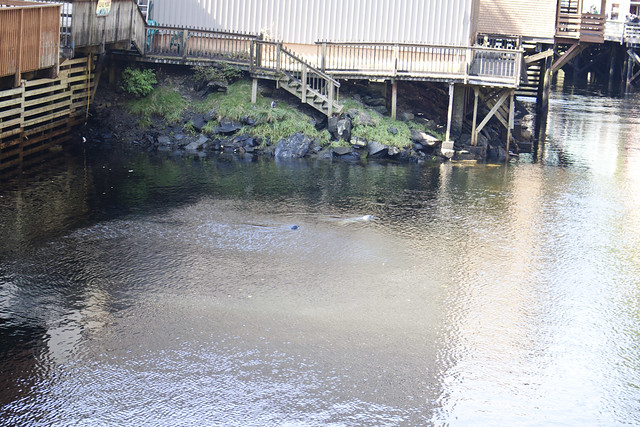 We walked the shops of Creek Street and then watched enamored at some harbor seals as they played in the creek. 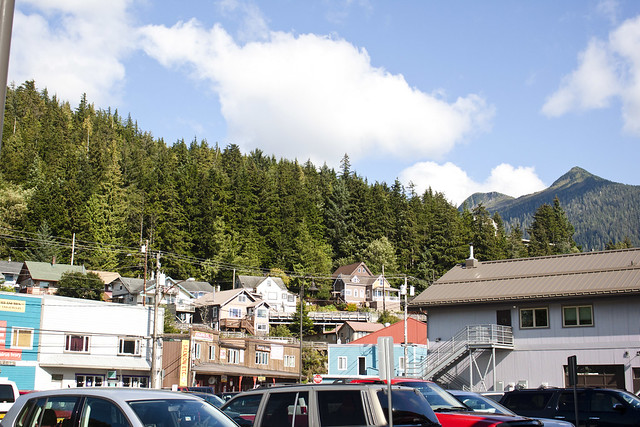 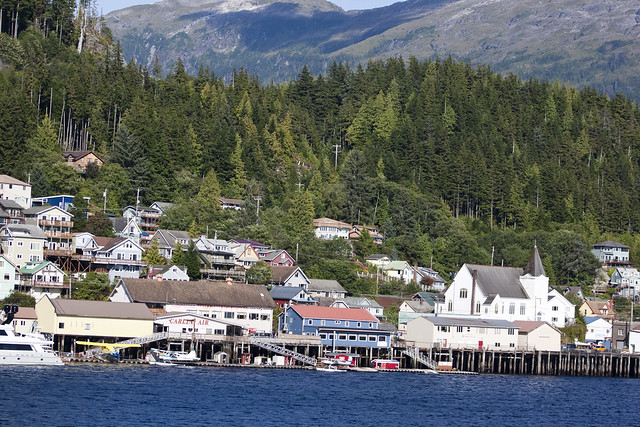 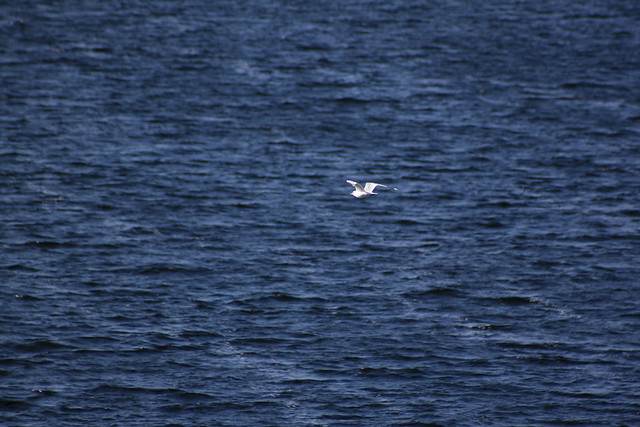 After, we had just enough time to kill to get some dessert before getting back on the ship, so we stopped at an ice cream shop and ordered some, sitting around and reflecting on our short day in Ketchikan. Back on the ship, we dropped our stuff off at the cabin and meandered up to the deck to watch as we departed port. It was a relatively quick affair, maybe twenty minutes after the final call to board. And then we were off heading for Juneau.

One thought on “Ketchikan, Alaska”