I’m going to abandon my typical platform for writing these and just free write, ok?

It’s been a fairly typical spring here in the greater Houston area, mild with bits of warmer days and tinges of humidity popping in here and there. Last night we received a cool front that dropped highs back down into the 60s once again and brought rain and thunderstorms along with it. And for someone who has pretty much been a homebody for the last two weeks, and in general, (exceptions have been two quick trips to the office to use my desktop up there) the rain is making me even more of a homebody.

Despite being home every day, I’m working during the largest chunk of these days. Which means I’m not doing all the chores or projects or reading that those who aren’t working from home but are still at home, or don’t have kids, are doing. I do a little here and there of course and Forest and I take a long lunch and some decent breaks, but I’m not as idle as I wish I could be. That means these lazy days at home on the weekend are still savored. Though, I am reaching the point where I could eat out every meal for the weekend. Eggs Benedict and hash browns for breakfast, chips and salsa and plate of cheese enchiladas for lunch, and wash that down with Chicken Bryan at Carrabba’s for dinner. Yep. Let’s do it! All of this means, we aren’t eating out. I know people are getting to-go and drive-thru but we’ve decided not to risk it, despite the urge for changing it up around here. I’m also craving hikes or just driving old country roads. If it had been warm and not raining this weekend I probably would have looked for a place that might have been without crowds and gone for it but that will have to wait until next weekend.

So, what are we doing? Well, two weekends ago we dropped a nice chunk of change to have our well repaired. That meant part of the garden ended up being trampled/driven on by the well truck. Chris also decided to fix up the well area and pour a concrete pad and get a lot of the metal components off the ground and away from the dirt so that everything will be much better off in the future in addition to building a proper well house around it. He’s been working on that slowly when he can so that is still a bit awry out there. Work days, I’ve been working upstairs from the couch so I can have a good view outside but also watch tv while I work if I am catching up something recorded. Forest stays downstairs for an hour or two and then has started coming upstairs to play or watch tv. The first week I attempted to make him do some worksheets from a couple of books my mom had given me from when she had done preschool work with my niece and nephew but after that first day I’ve pretty much given up trying to make him do any sort of lessons. Now I make him draw or be creative in any way possible and we’ve watched several Super Simple Draw videos on YouTube/Amazon which he enjoys. And he’s been doing some ABC Mouse here and there but don’t get me wrong, there’s lots of tv time going on during the week. I wish it wasn’t like that but if not I typically have not only a soon to be 16 year old cat in my lap but also a 5.5 year old, too, in addition to my laptop computer. The last few months we’ve even let him out in the backyard to play in his treehouse semi-unsupervised so I’ve tried encouraging him to do that while I watch from the window but he’s used to having friends and people around people at daycare which only makes him want a playmate during this time. Which, you see where this is going—isn’t feasible when mom has to work. During this time Chris has been splitting time between the office and at home. There are just a couple of people still trying to work from the office just because it is easier, I think. And Chris has been doing that some, too. Plus, he’s had a couple of field visits. I’m actually still surprised at how many people are still wanting field visits done.

I haven’t been into ‘town’ in 2.5 weeks and Chris went once more for a few supplemental groceries about 1.5 weeks ago. The last time I was at the store was 3 weeks ago tomorrow. He came back from that last trip to the store and said it was pretty surreal, which I had felt somewhat during that trip 3 weeks ago so I’m sure it was even moreso later. He’s done a few other errands in regards to getting the well up and running so he’s seen how busy things are and of course while traveling a few areas around the state for those field jobs. Me, my circle of life encompasses a few blocks around here. I did manage a two mile bike ride at lunch the other day and that was the widest area I had really seen and that was still only houses!

Other parts of our days include spending time outside as much as possible. Forest and I have been having lunch in his treehouse during the week. Then we wander the yard and see what we can see. Forest will play and sometimes I garden. Most of the time I’ve just been sitting and watching. We take walks in the evening to check out the leaf cutter ants or go for a bike ride around the block. I pull some weeds or see what is going on in the garden. Really, we’re taking it slow. Sometimes we go to the studio where we spend anywhere from thirty minutes to three hours there.

My reading has been mostly non-existent this last month. Going from listening to a ton of audiobooks and reading other books the first two months, that plummeted this month. No gym time means no audiobooks, and working from home means no audiobooks. That also means podcast listening has plummeted as well. The two books I did finish these last few weeks were Know My Name by Chanel Miller and Untamed by Glennon Doyle. The first is about the Emily Doe assault case against Brock Turner a few years back. Chanel Miller is Emily Doe and this is her story about the assault, trial, and afterwards. I highly recommend reading it and give the book 5 stars. The second book I was disappointed in. I’ve cursory followed Glennon over the last decade and enjoyed her Love Warrior book a few years back and thought this would be equally as good. Instead I found the essays a bit lazy. About half of them or more are recaps of things she’s talked about before or I’ve seen written elsewhere. The rest are some newer essays that were fairly decent but I still found them to be underdeveloped. Honestly, this felt like a rush to get a book to press. I’d say Hard Pass on buying it but if you like Glennon do look into checking the book out from the library. 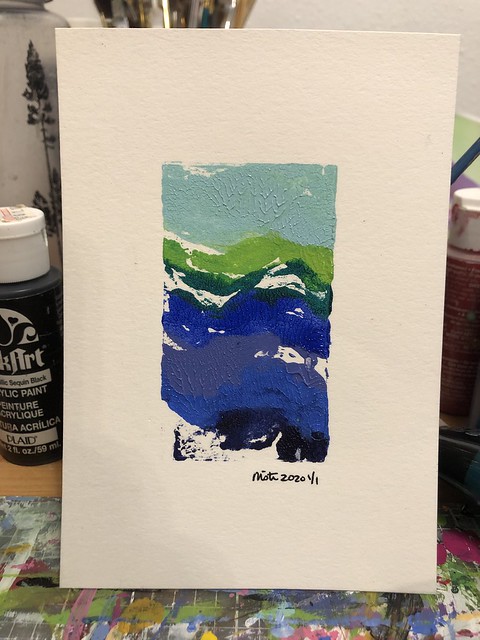 I’m still making my prints! I sent a few out to some friends. I may do another round of that in a few months. I’m debating doing the 100 Day Project—a creative project every day for 100 days. Last year I tried 100 days of blind contour drawings but only made it a month before I got bored. I think I will probably pass on that project again but we’ll see.

That’s about it. Trying to stay sane while the world crumbles.