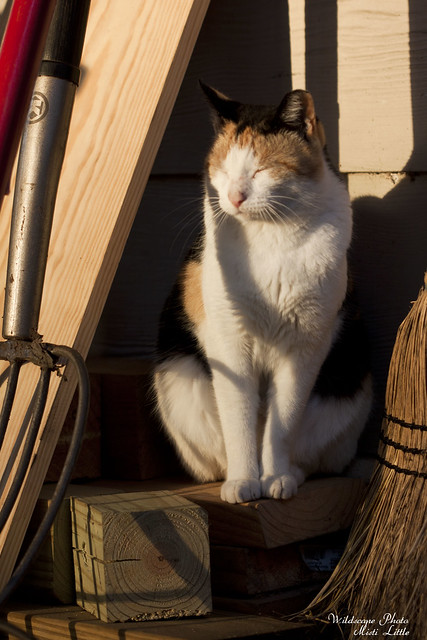 Sweet, sweet Little Callie. She lets us pet her, sometimes we can pick her up briefly. Unfortunately she and Fred are both picked on by Tom and Mr. Stripey, and apparently by Ruby on occassion. Sometimes I wish I could bring her inside and she could be a girlfriend for Samson or Leo. Fred, sweet and shy boy. We thought we were going to lose Fred last week. Two weeks ago Ruby was sick for a few days, lingering off by herself and not eating. She appeared miserable but after three or four days she began eating. Sometime in the middle of her sickness Isis disappeared. She has not returned. And then a few days later Fred got sick and his illness lasted over a week. He lingered off in various places near the garden, not drinking or eating. We’d take food over to him, even giving him some tuna once. Finally we saw him drinking water from a puddle that formed on the plastic covering our pile of garden dirt for projects. I took him some clean water but I’m not sure he ever drank from there. He then started walking a little more and finally one morning he decided to eat. Really, we think it was very close to dying.

But sweet Isis is likely gone. So, now we’re down to five feral cats around here. Mr. Stripey dreamed up a reason to play with this piece of cardboard—nothing was under it but he really thought there was. It was enough to make Ruby curious!

It’ll be a sad day when there aren’t any feral cats to follow us around the yard.