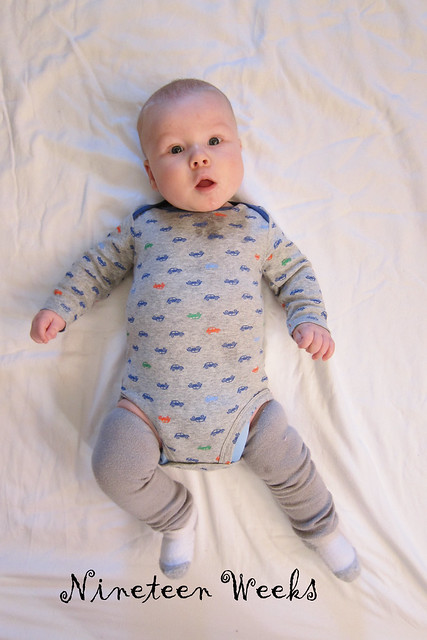 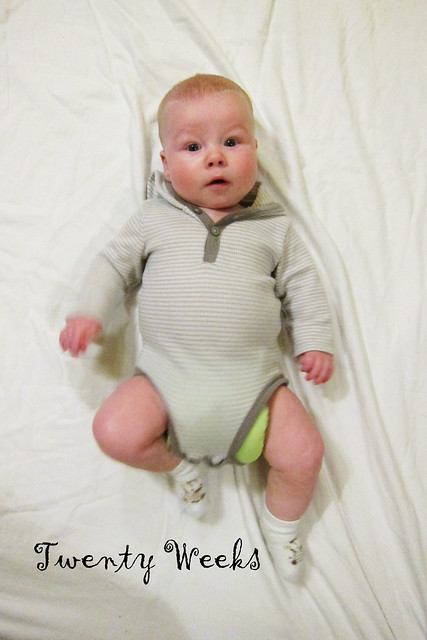 Forest has been really fun these last few weeks, not that he hasn’t been fun before. The difference is he’s changing daily! It was week 19 that we found out he had started rolling over from back to front at daycare. Chris found out one morning when he dropped him off and told me when I got to work. It was several more days, actually a week, before I saw him do it. I found out Chris saw him do it at daycare, days after the fact, which perturbed me quite a bit. He’s still got some problems getting over whatever arm he’s trying to roll over but once he gets it he has fun on his belly for awhile. He’s even trying to scoot just a bit on his belly and I think if we give him belly time he’ll be up on his knees and trying to crawl in no time. Even tonight (Saturday night as I’m writing this) as we were doing belly time he was trying to put his knees up under him and get up on them but he just doesn’t have that upper-middle belly strength yet. But, I bet soon we get there and then we’re in trouble! Even if we leave him on his back for awhile he’s figured out how to wiggle and squirm around to where he wants to go within a few feet radius of where he originated.

At his 4 month well-visit with the pediatrician she said we could start him on rice cereals and the like soon. My reading prior to this had me turned off on introducing solids a: so soon and b: with cereals and I kind of hedged her and said we’d started in a few weeks. She wasn’t demanding we start or anything, just suggesting it. I’m still aiming for testing the food waters out at the six month mark and I’m getting excited for that. Some other blogs I read and a few friends on Facebook with babies just a bit older than Forest have already started their kids on solids and I’m getting a little giddy to see him try food for the first time. He’s definitely interested in shoving everything into his mouth these days and is starting to keenly watch us as we eat dinner. Chris’ mom got his high-chair for us for Christmas so he’s been sitting with us for some meals, which he likes. Usually he just chews on his toys while we are eating. On Saturday morning was the first time I noticed he was interested in what I was drinking, coffee, while we were watching Wonder Pets. I let him look inside it to see the coffee and told him what it was and he could have some in a few years, and he immediately put his lips on the side of the mug. No, he didn’t drink it, but he was definitely curious on feeling the cup with his mouth so I let him explore that sensation for a few seconds before I knew he would get all wild and try to spill the coffee everywhere. Curiosity is growing with him!

Something else I’ve noticed with him is I believe he’s realizing and understanding when I leave a room and is having a bit of separation anxiety. I had seen on the Wonder Weeks app that this was a month 6 or 7 thing for it to begin but in the last week I’ve noticed he’ll just flip out if I leave him on the playmat and even just step a few feet away or walk into the kitchen out of his viewpoint. It just hit me today (Saturday) that this may be his problem. When he started crying I’d initially check his diaper (dry), try to feed him (no mom, not hungry), and then sit with him a bit and play. Of course then I’d try to go do what I was intending to do and he’d still get frustrated. I ended up wearing him in the Ergo carrier for awhile in order to get some laundry done. It finally hit me that he may be understanding perspective and distance more and the fact that I’m a separate entity now.

I think I mentioned a post or two ago that I was reading about peaceful and empathetic parenting. It was part of my ‘mindful’ word for the year and I managed to find quite a few books that I had wanted to read at the library. I’m concurrently reading The Whole Brain Child and Unconditional Parneting. The first seems a little more geared for parents of 3-10 year olds but I can definitely see its applicability. It is also a thinner book and more simple to read but I’m liking it so far. It’s mostly about the development of a child’s brain, understanding the right versus left brain and its use in young children as well as the ‘upstairs’ and ‘downstairs’ brains—-upstairs being the more logical and reasoning section that isn’t even fully developed until we’re in our mid 20s and the downstairs being the more basic and rudimentary sections that deal with anger, fear, and quick impulses like reacting to danger quickly. It all makes sense, kids are figuring out how to use their brains and understand what’s going on around them and when they don’t that’s usually why tantrums, confusion and other ‘problems’ set in. The book is guiding adults and parents how to approach these issues from a more empathetic point of view, understanding where the child is coming from and solving problems in a more gentle way.

The other two books I have are Peaceful Parent, Happy Kids and Simplicity Parenting. I also have a book in the queue at the library Non-violent Communication—aka: words matter. I haven’t even read it yet but I have been finding myself reevaluating what I say after I say it. (Here’s a starter YouTube video of Marshall Rosenberg explaining NVC.)

I guess that’s about it for these two weeks. Forest continues to change by leaps and bounds and is adorable as ever! 🙂 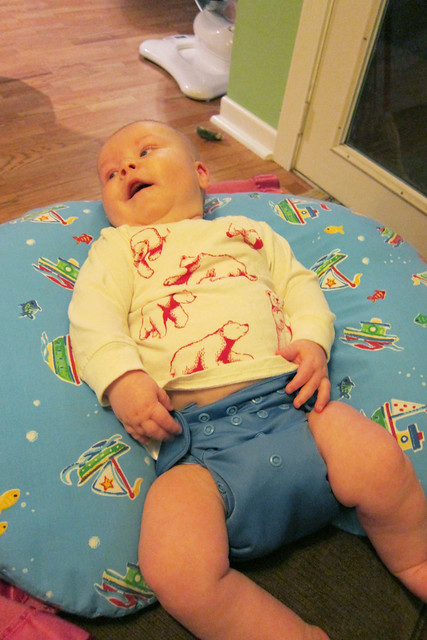 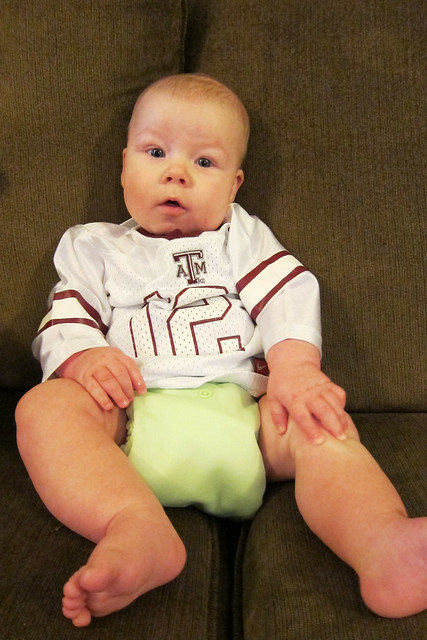 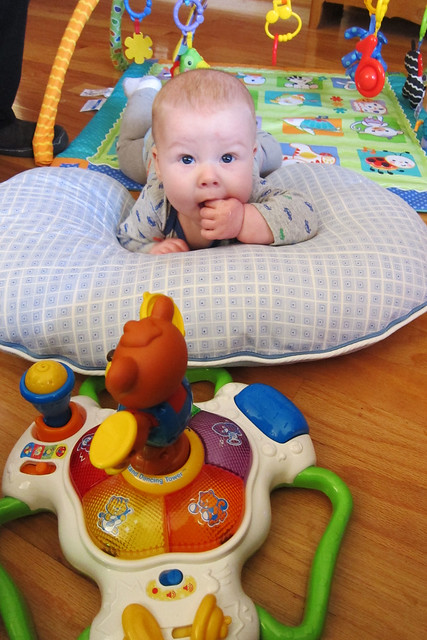 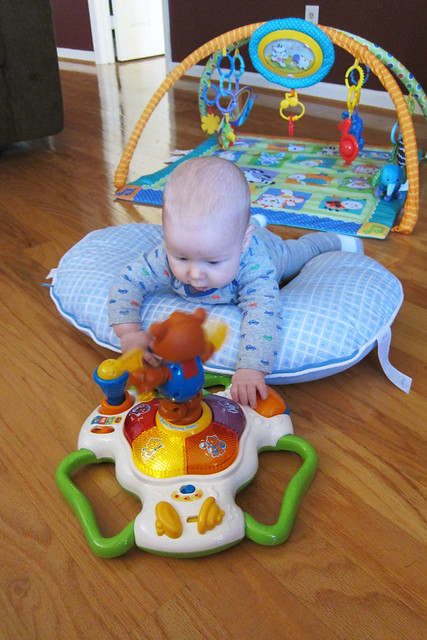 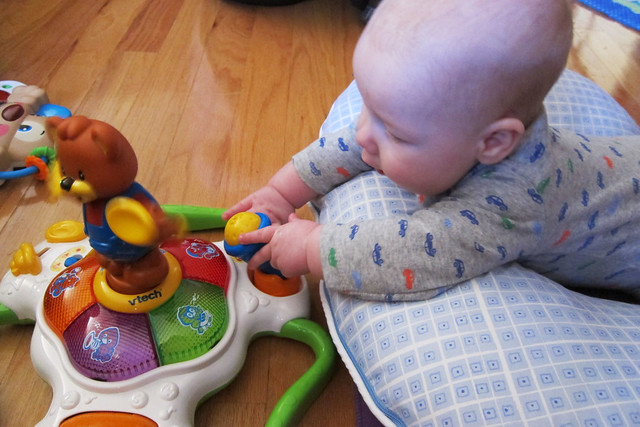 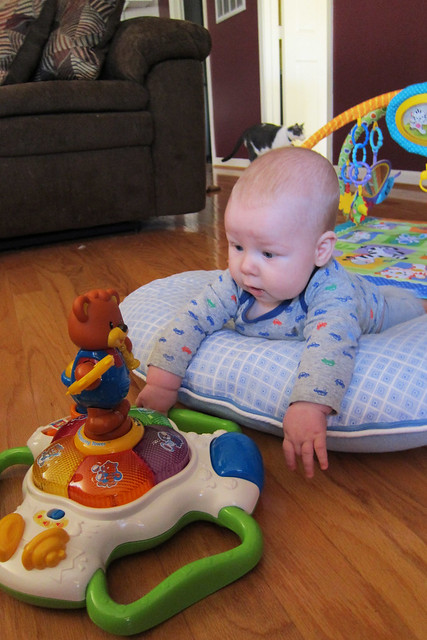 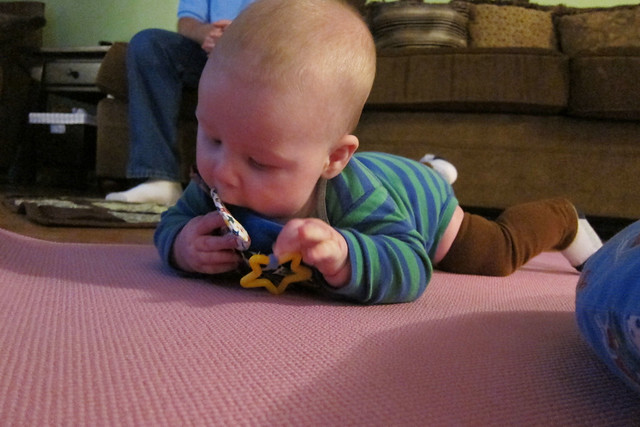 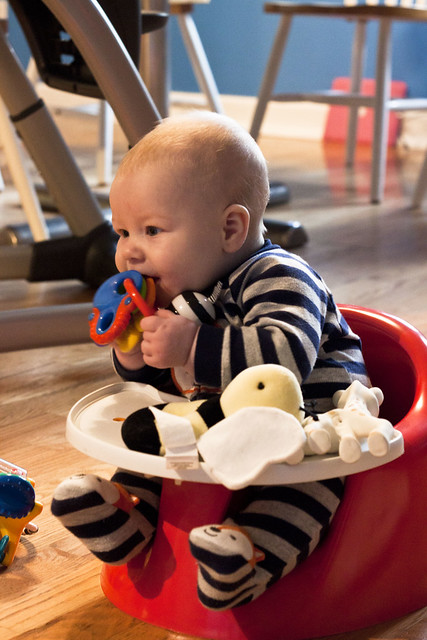