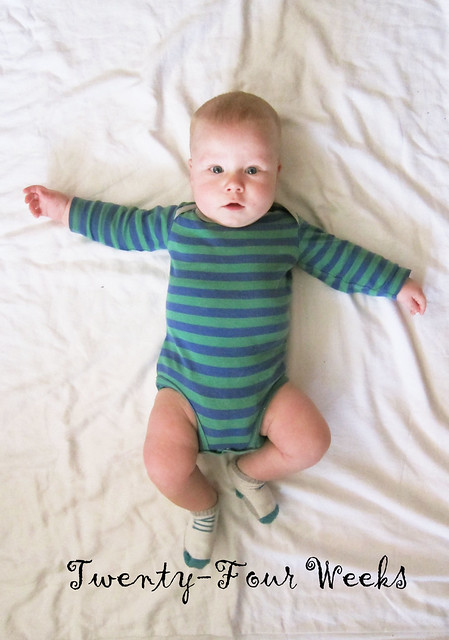 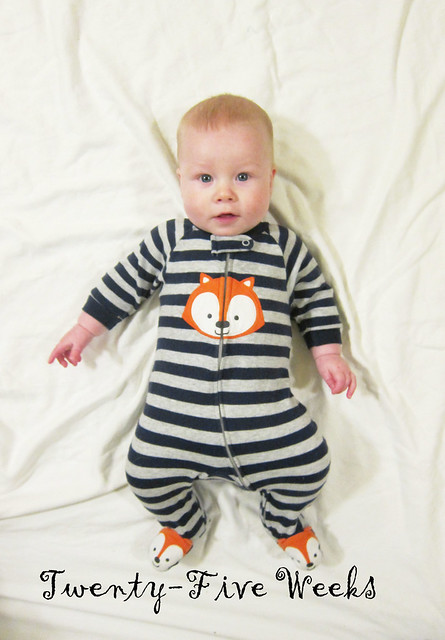 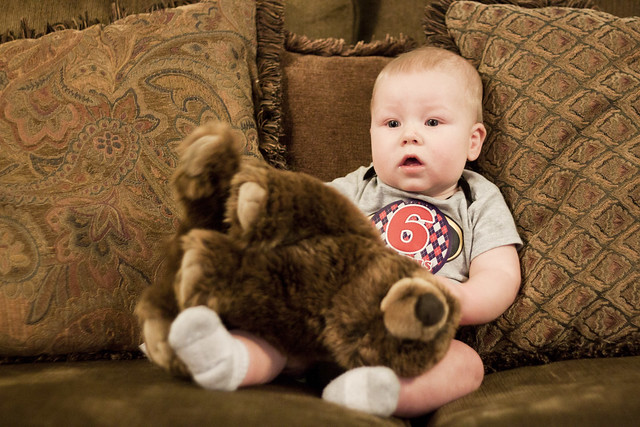 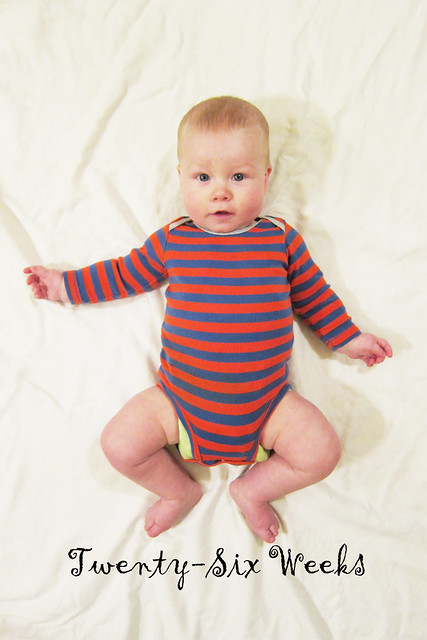 How are we already at six months??? How is my sweet little baby boy 1/2 a year old? It doesn’t seem possible! This seemed like such a far off time period back in September and here we are already. Insanity!

I told my sister-in-law Stephanie that I thought Forest had toddler-esque features in the food photos from last week. He does, he isn’t a baby-baby anymore. At 19 lbs and 28″ long, he’s heading fast towards late babyhood and into the toddler years. His six month checkup and shots went well. Astonishingly he did not cry when the first needle was jabbed into his right thigh and instead smiled like it was just a fun time. Then the next two shots went into the other thigh and the piercing cries erupted! The pediatrician was happy with his developmental skills and commented that he was strong—yes, the kid is strong, I think he’s going to yank my nose off one day and rip a chunk of hair out—he doesn’t know his strength at the moment! Nursing him is an exercise in patience and teaching him to focus and not to play with his feet, my shirt, stick his hand in my mouth, wiggle, pinch and pull the vessels in which his milk comes forth, all while he’s getting breakfast, lunch, dinner or the umpteen little snacks and meals throughout the day. So, yes—the kid is strong!

He’s mastered rolling from back to front and is pretty good at getting back over but he likes to ‘forget’ and then lie there on his belly with all appendages in the air while he wiggles and whines for help back over. I help him back over only for him to flip back onto his belly 3.4 seconds later! We practice rolling up to sitting position all the time and he’s doing really well with that, I only help him just a bit and he’s getting stronger. He’s not sitting on his own quite yet, though I can give him just the minimum amount of support and he’ll sit for a little bit. I will be happy when he can master that so he can play sitting up for awhile, which will hopefully alleviate his frustrations about being on his back and belly all the time.

In sound and language he dropped the da-da-da-da repititions of a month or so ago and has moved on to other sounds. (Ok, so when I started writing this draft he had stopped but in the last few days he’s picked it back up again!) No ma-ma-ma-ma yet! He spent a few days earlier last week tucking his bottom lip under his top lip and smacking/sucking it. Not sure what that was about but he looked really cute while doing it! We’re constantly talking to him and explaining what things are that we’re doing or seeing. I’m not sure what he’s absorbing but he’s interested in all of the new things that we do.

On the food front we haven’t done much in that way in almost a week. He made us nervous a few times with some barfing that was brought on by his first swallows of food. Chris was worried about the baby led weaning aspect of it but I read that even those fed puréed food can do the barfing when figuring out what food is. I was getting excited, too, because he was just starting to figure out what food was and seemed to understand that he was supposed to bite off a bit, mush it up, and swallow it. We’ll try again this weekend. I also want to start introducing cups to him as he’s taken a big interest in my cups when I drink something. I also just found out he’s chugging down bottles mostly without any help at daycare. He rarely gets bottles at home so we had no idea he was doing it all on his own until I walked in this evening and saw him handling it himself. They have to help on the last ounce to get it the milk into the nipple well enough for him to get the milk out.

I’m hoping he’ll start sitting up on his own here in a few weeks. Last weekend I noticed that he was doing better but started tilting over after a few seconds unsupported. He had figured out to hold himself up by putting his hands out in front of his legs, but he’s still wobbly.

Over the weekend we made our first solo trip together to Longview to visit my friends Michelle and Stephanie for Michelle’s baby shower. She’s having a surprise little boy here in a few weeks. I hadn’t seen her in over a year (!!!!) so it was awesome to hang out with her and Stephanie for awhile. Forest did great on the 4ish hour drive up and back. I was able to get a hotel room next door to Stephanie so once I got Forest down I was able to sneak next door and hang out with her and her two kids while Forest slept and I watched him on the monitor. Forest slept a lot of the trip home on Sunday. I didn’t realize he was coming down with a bug until that evening when he barfed all over me. His diapers weren’t too pretty either. Subsequently he ended up home from daycare by lunch the following day and then I ended up sick and then Chris ended up sick. Yippiee!

In the next few months we have some camping trips planned since the weather should start turning for the better. I’m looking forward to getting Forest into the outdoors more.

Six months…crazy! I love this little booger more every day! 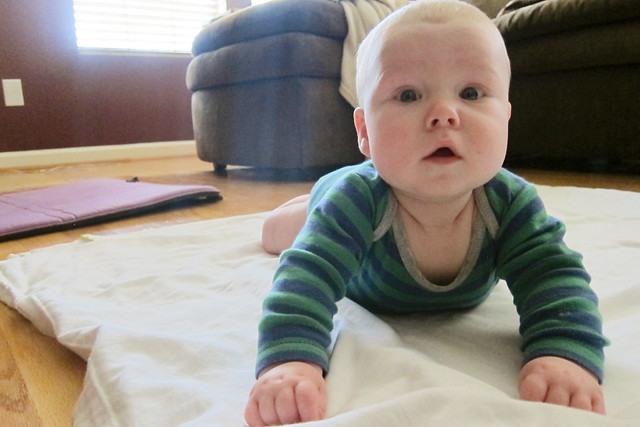 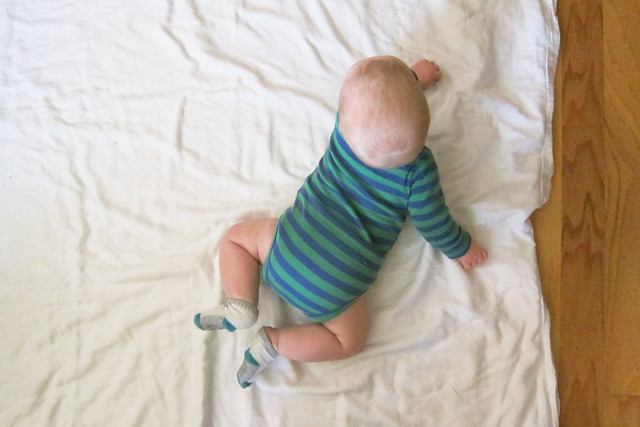 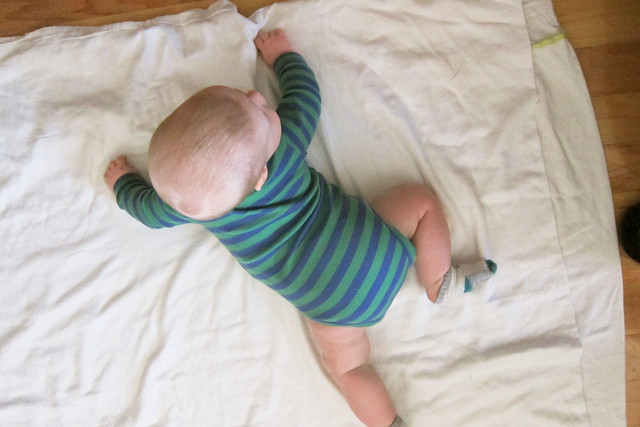 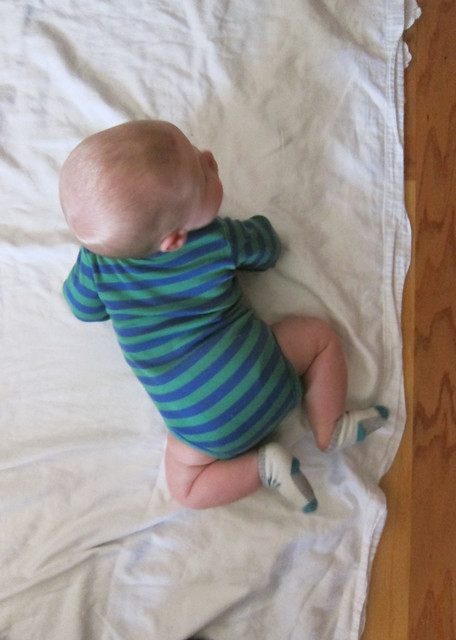 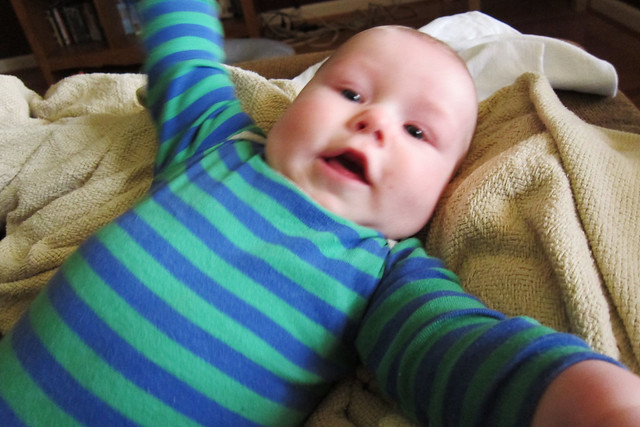 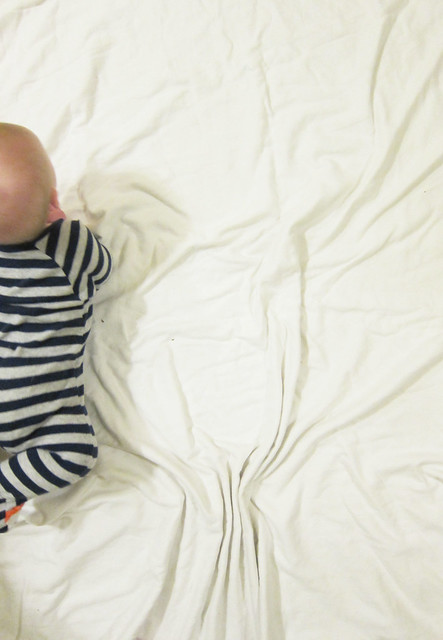 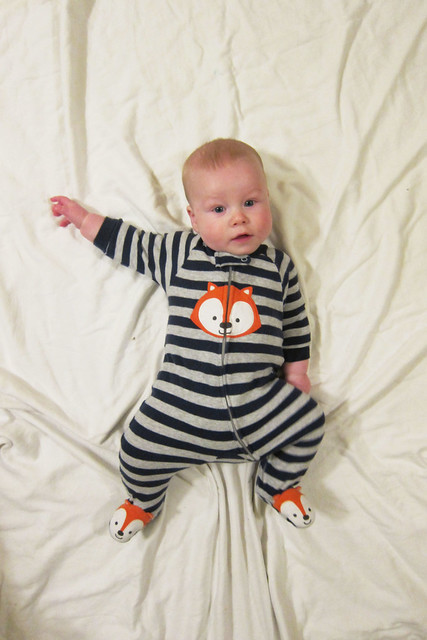 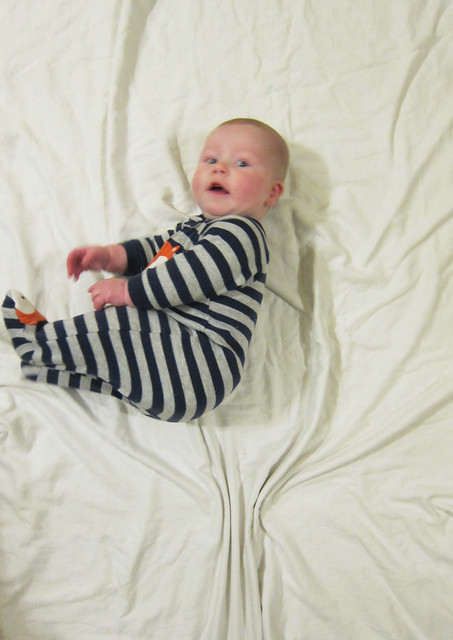 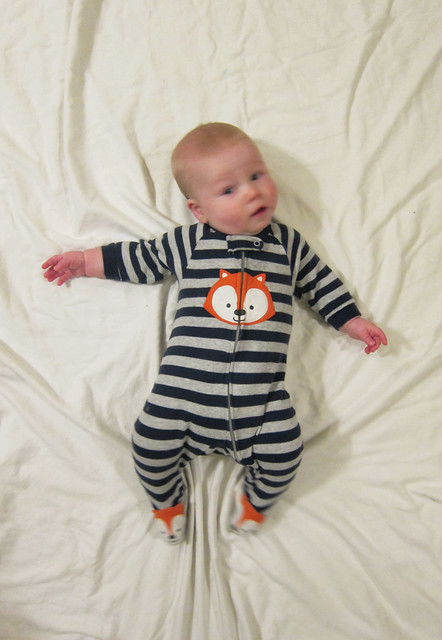 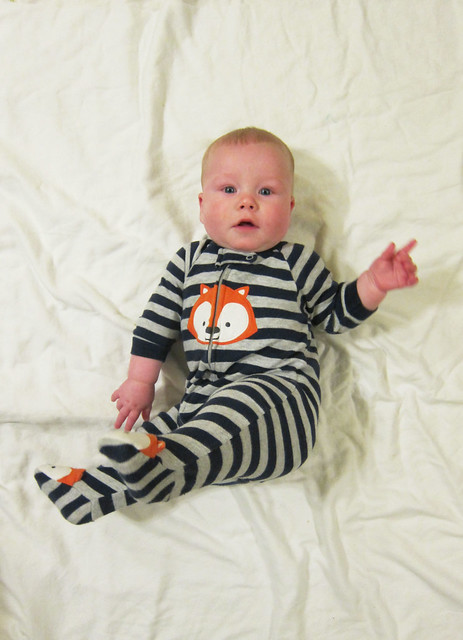 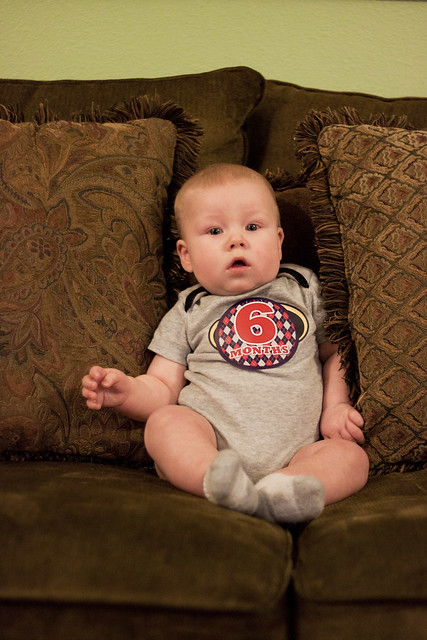 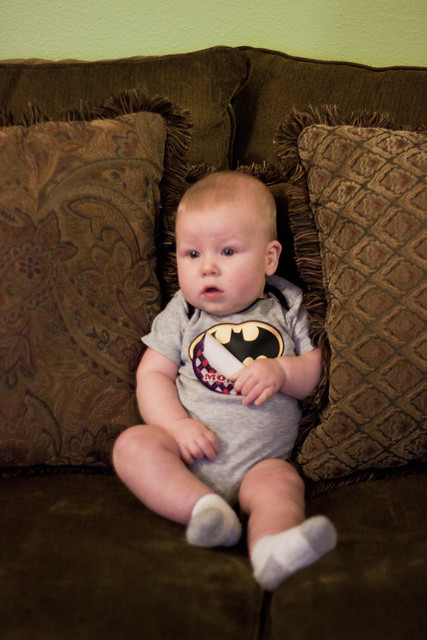 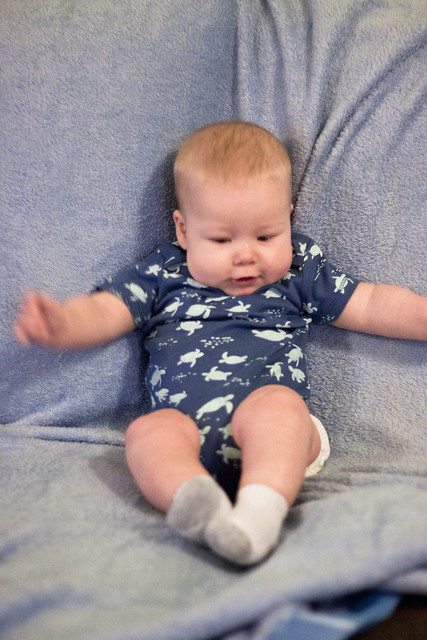 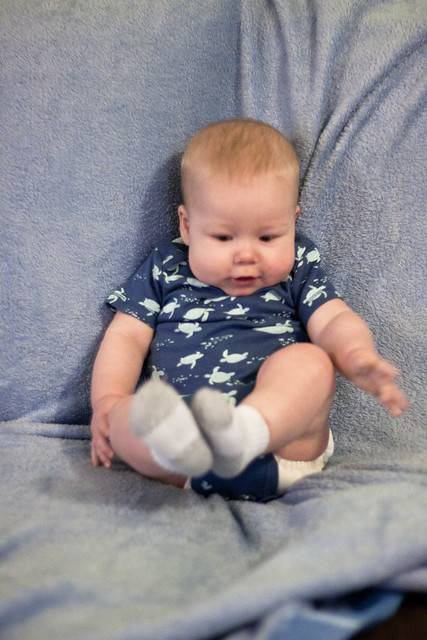 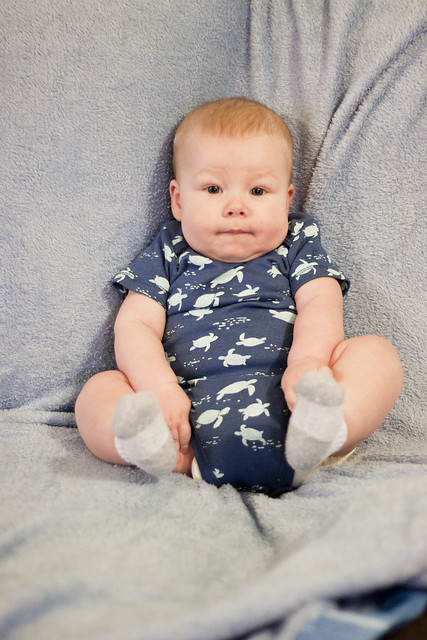 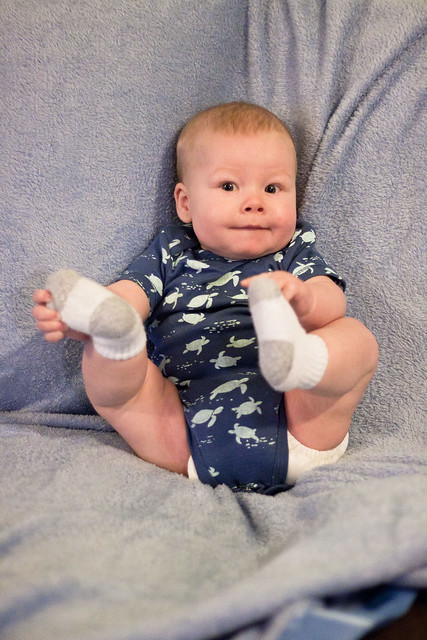 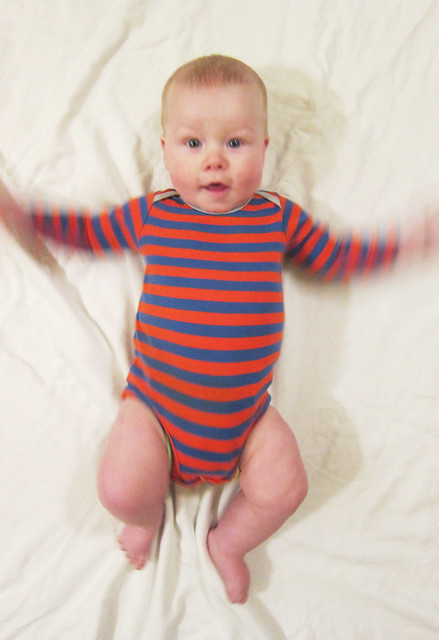 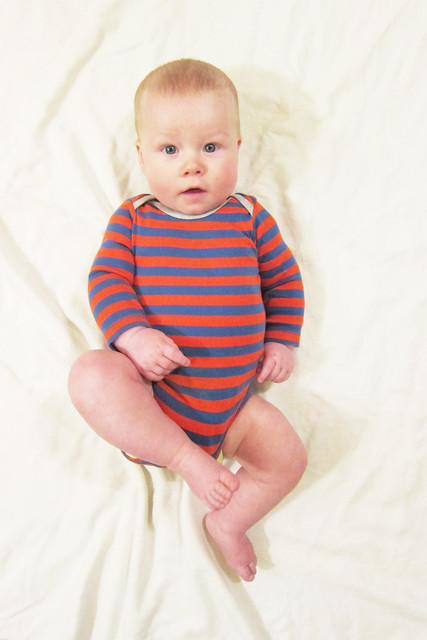 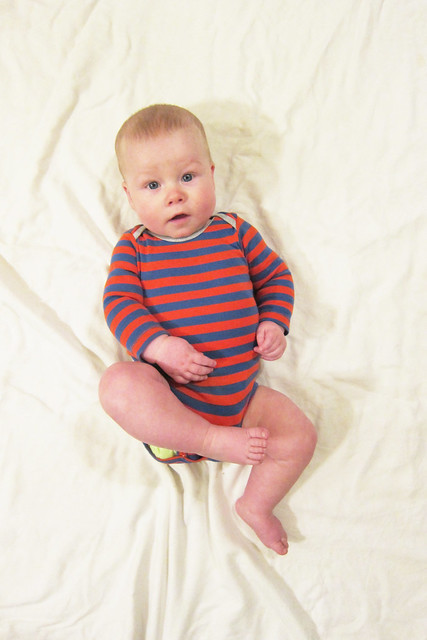 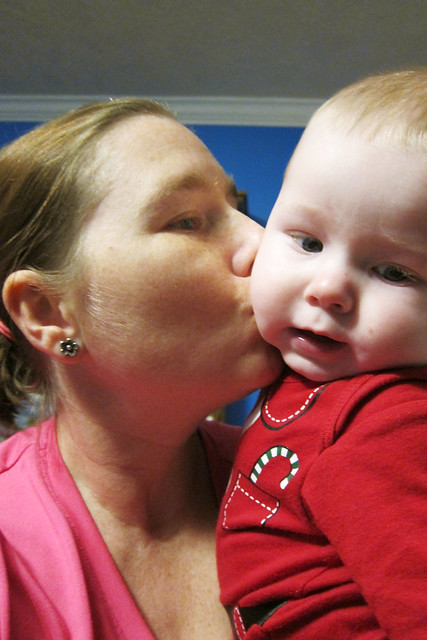 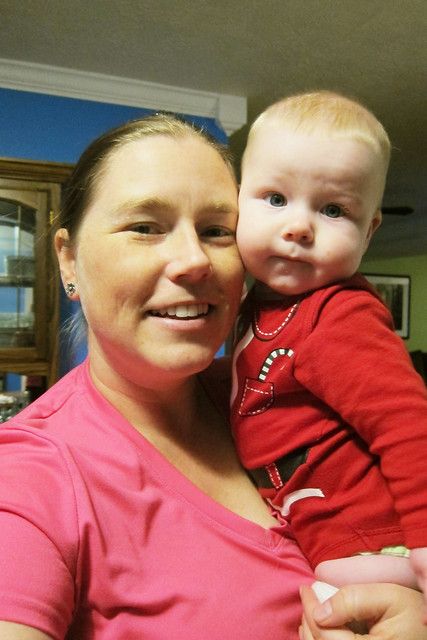 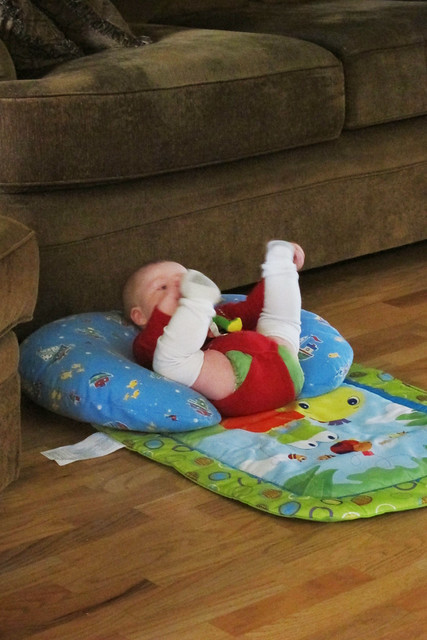 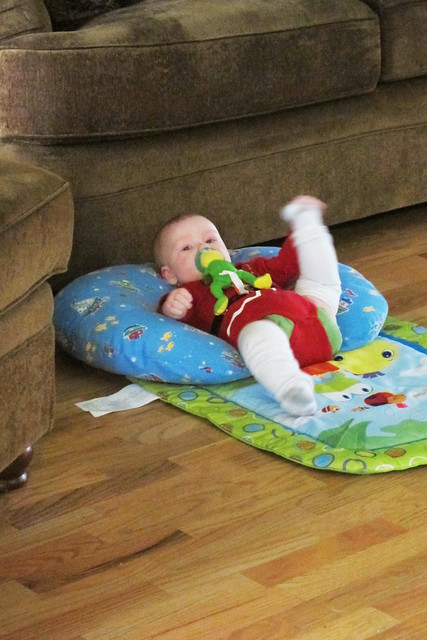 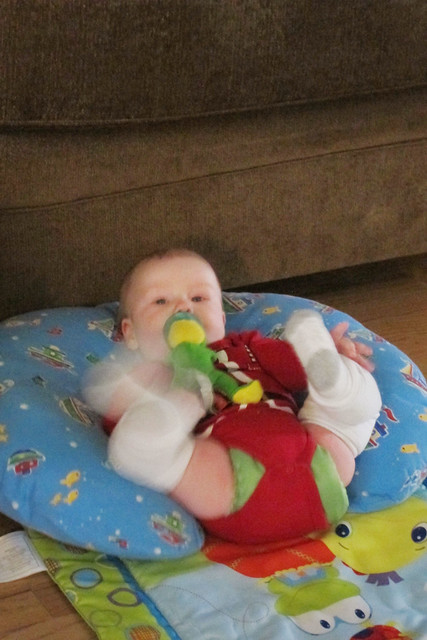 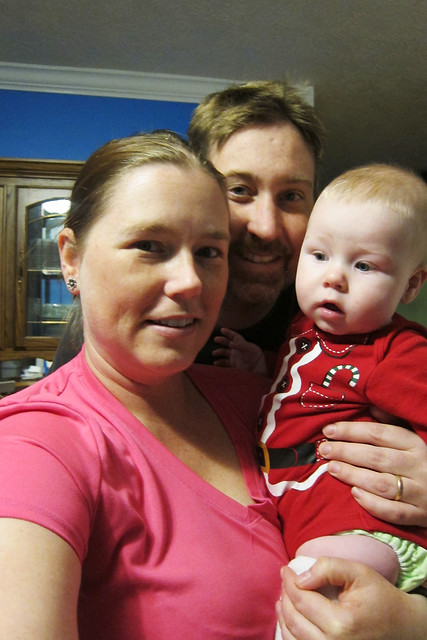