If you’ve been reading here for any amount of time you probably remember the first few weeks we were living here and it flooded. We’ve had a few simliar floods and smaller floods since then, including at least two or three others this spring. The most recent was the Tax Day Flood so it is very fresh in everyone’s memory. After that flood I remembered that back in 2012 someone had mentioned a massive flood in 1994 in Houston and that was recalled again so of course looked it up and was definitely worried about that ever happening again so I rechecked the floodplain maps for our county and was relieved that for the most part all of the buildings on our property were high and dry even in that 500 year floodplain. The line definitely traipsed the edges of our shed and man-cave buildings but the house sat good. That was reassuring…but still, a little worrying.

Yesterday afternoon at work the sky got dark and I checked the weather and saw Bryan/College Station was taking a pounding with a tornado and flooding. We were on the edge of the system and didn’t seem to be affected too horribly at that time. That is until we got home from work. It was Chris’ turn to pick up Forest from daycare so I started dinner. When they arrived home I rushed out with an umbrella to get Forest out and we had a good dinner. It was raining hard but didn’t seem like it was going to be horrible. Of course we weren’t watching the radar heavily at that moment. From the span of 6pm to about 6:45 the pond went from being a pond to coming into the yard up to the fire pit. By the time I started getting Forest to bed at 7pm Chris said he was going to go and just check the yard for things that might float away. It didn’t seem as daunting as it was going to get at that point.

Meanwhile I’m sitting in the dark in Forest’s room, rocking him to sleep, and Chris is sending texts throughout that the water is as high as the Tax Day flood and then nope, getting higher. Then he tells me water is now flowing between the man-cave and our neighbor’s house. Not long after he’s telling me the water is 4″ from the bottom of my neighbors house which is on pier and beam. And soon after he texts that the neighbor’s family, who also lives in the neighborhood, has come to get them in a canoe and they paddle off down the street! Needless to say I’m freaking out by this time. The toddler senses my anxiety and takes for-ev-er to get to sleep and when I finally escape I am stunned to see what it looks like outside. These are all Chris’ photos but it was even higher just after sunset but the photos wouldn’t have come out. I wish we had a video to show how fast the flow was between the houses; it was crazy!

I ended up calling some of our older neighbors two doors down who are much closer to the creek and while they did end up with a little water in the house they thought with the break that it would recede enough to compensate for any more rain and didn’t want us to come down in the canoe to get them at that point.

Luckily we got a break in the storms after around 11pm with a few smaller storms through the night and one bigger one closer to dawn. The water is down now in the yard but the area roads are still flooded near creek crossings. Chris ventured out to see about getting breakfast tacos for us and to scout out the neighborhood. He said there were cars submerged and it was pretty awful. I know based on social media and the news that there was an interesting corridor of flooding in a line along the Montgomery County/Harris County line along with other flooding in areas near Bryan/College Station as well as 16″ of rain in Brenham. It appears portions of the Austin area have had flooding too.

And Chris just tells me, after he’s been moving debris from the yard, that the neighbors did get water in their house as well as their vehicles. Bummer. 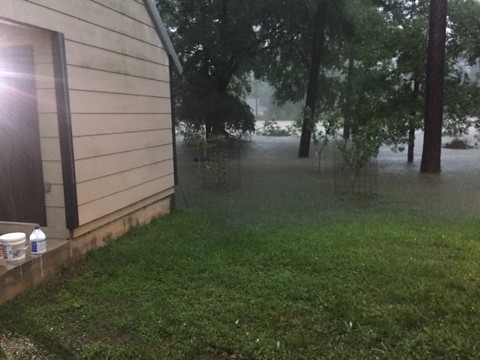 This is between the shed and the house. The water came up more from this photo to the those containers you see. 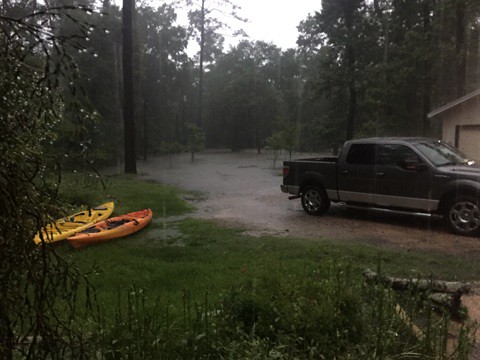 Chris moved his truck further up from here because the water came up even higher on the driveway. The kayaks were out from a fishing trip he took a few weekends ago and those were moved further up as well. 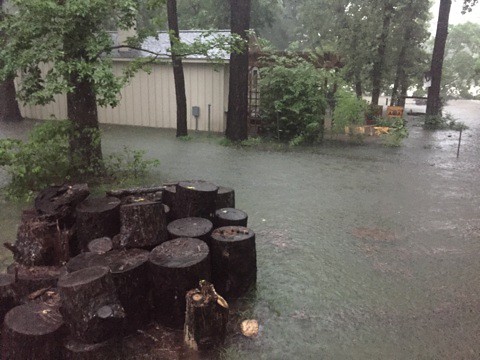 Looking to the neighbors house from our carport. 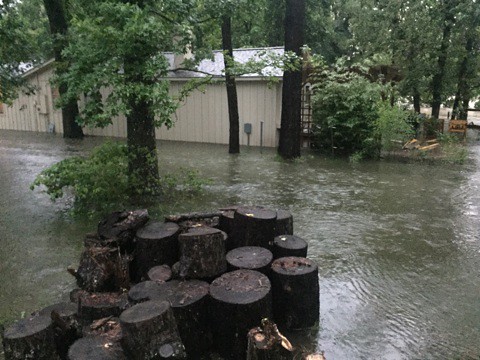 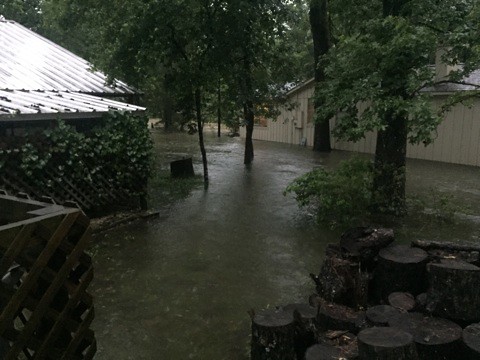 This is usually a ‘high and dry’ kind of spot. But also part of the 500 year floodplain. 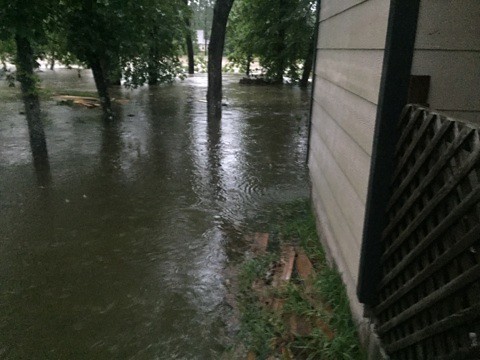 Those wood pieces were later submerged. 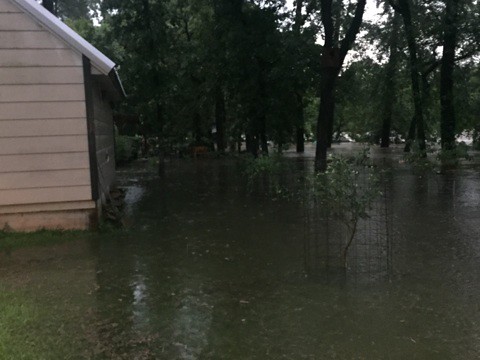 From the side door/laundry room of the house looking to the carport. 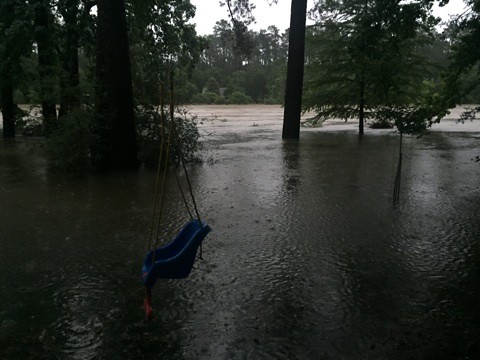 I’ve never seen water under Forest’s swing. It’s at the lower end of the mounded slope which leads to the house. 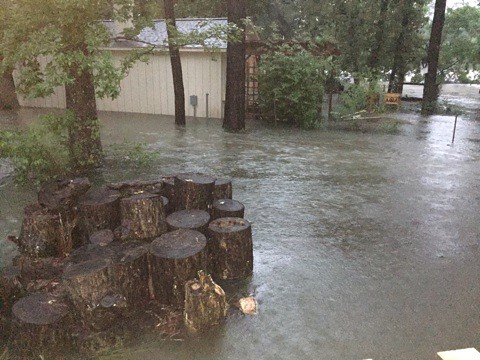 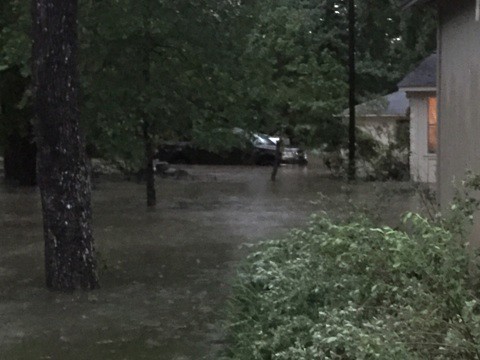 From the driveway near the man-cave looking to the neighbors driveway. There are azaleas planted by that pine tree but they were submerged in the photo. 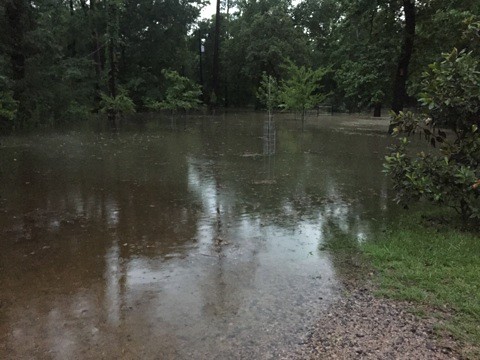 Around 11pm I heard the pipes gurgle and then a few other sporadic times throughout the night and got very nervous about the septic backing up into the house. Thankfully that did not happen. When we knew the water was coming up towards the septic we stopped using the plumbing. I thankfully opted to shower before toddler bedtime, mostly thinking about a power outage, but it was a well timed idea. Dishes and diaper washing did not get done last night!

So, I’m ok with having a fairly dry summer after this entirely too-wet spring.