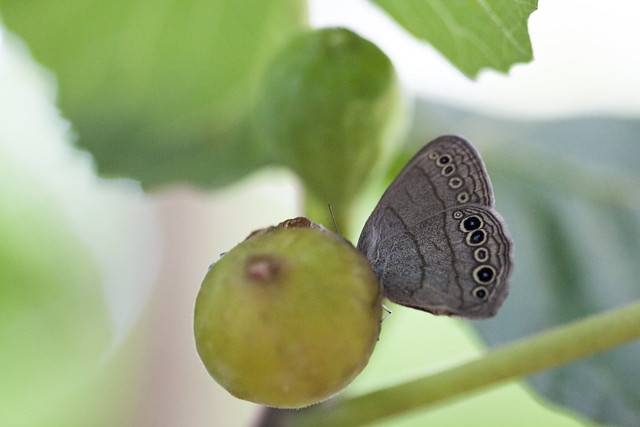 Over the weekend I was scoping out the figs, seeing if there were any to harvest. As I was doing so I was taking photos of the garden. I noticed several butterflies landing on the fruits and sipping the juices from the broken fruits pecked at by the birds. I managed to get a few photos but it was a butterfly I was not familiar with and would take some book identification and Googling to figure out. At first I thought it was one of the ‘Blues’, Family Lycaenidae, Subfamily Polyommatinae, but quickly realized it was a Family Nymphalidae, Subfamily Satyrinae (Satyrs and Wood-Nymphs). From there it became difficult because the rings, so bold here, just never really matched up quite well when I started going down the list of butterflies in that subfamily.

After a lot of Googling and comparing I finally decided it was a morph of the Carolina satyr, Hermeuptychia sosybius, but not before thinking it was a Hermes satyr, Hermeuptychia hermes, or maybe even the newly described (because it was described in this region) Intricate satyr, Hermeuptychia intricata. I found several charts that compared the two butterflies from various regions as well as their male and female differences and quite frankly there’s definitely some regional differences in those eye spots, which make it all the more confusing. So, I’m not even confident to say this is a Carolina satyr but I got tired of guessing and wanted to share. I eventually eliminated the Hermes because its range is south Texas and into central and south America. Possible, but not likely, it is that species here in greater Houston, so easier to eliminate.

If you are a Lepidopterist, what do you think? Is there another one I missed that it might be? Either way, it’s pretty butterfly flitting about my yard right now.