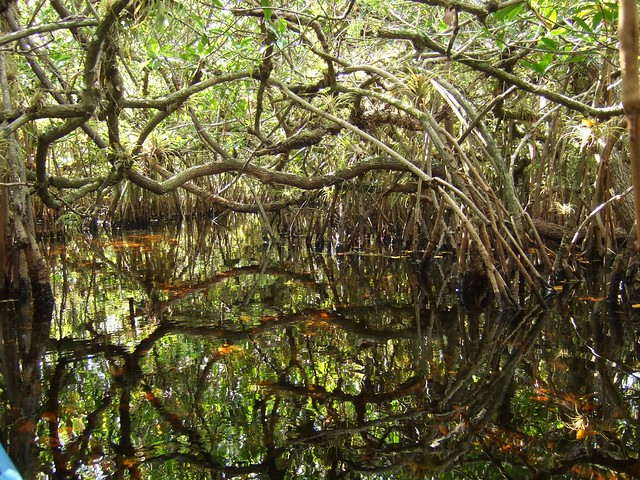 Today’s photo is brought to you by the Turner River in Big Cypress National Preserve and Everglades National Park, circa 2008.

+In My Head
Let’s go with some random bulleted thoughts….

Outlander wrapped up earlier this month with a season finale that redeemed the back half of this season. It looks like they are going to start shooting season 3 soon so maybe that means we will not have to wait until next August for a new season. In the meantime I started watching Stranger Things on Netflix after seeing many people raving about it. It’s an early 80s sci-fi flick, very reminiscent of many of the shows some of us GenX and early Millennials watched as kids. Also, it has Winona Ryder which probably helps with that aesthetic. I haven’t binged it like I typically do with Netflix shows, instead I’m watching an episode here or there.

This week I’m poking my head into the DNC Convention. I’d initially resolved not to watch it but my inner political geek got excited about it and the lineup of speakers so I’m recording it and catching speeches I want to hear and then listening to the 9-10pm (CST) hour live. Woot!

Movie-wise we had an HBO preview weekend a few weeks ago so I recorded a few movies I hadn’t seen and some older ones I wanted to rewatch. First up was Trainwreck with Amy Schumer. I’ve tried watching her comedy show a few times and find myself in a love/hate relationship with her. The movie was pretty good, trying to be a new version of a rom-com…Bill Hader had me reminded of Colin Firth a few times in mannerisms. Next up was Far from the Madding Crowd, a Thomas Hardy novel-turned-movie. I loved it but wanted to slap the main character for being such an idiot and marrying the obviously wrong person. Also, I got some Jane Austen vibes in there and wondered if Hardy had George Wickham and Colonel Brandon on his mind while writing the book. I’m currently rewatching Juno which I originally watched in a theater one evening in Tucson in 2007 while there during a work trip. Rewatching it brings back some memories from that trip and how much I listened to the soundtrack afterwards back in Florida.

Rain! After nearly two months of very dry weather we’re finally getting rain back into the forecast.

Nothing on the agenda but I’m thinking of plans for the upcoming months. So much to get back on track in there!

Have you seen my garden posts lately? I’ve been going strong on those!

In other garden news we’re battling a bulldozing/digging animal—probably armadillos again. Looks like Chris might be trying to trap and relocate them again.

Also, beavers. The devoured our alligator flag (Thalia geniculata) which was looking fantastic, and then they gnawed up the sweetgums down on the shoreline. Chris has been working to put wire around the base of those trees. Grr!

I’m trying to pick up on my reading once again but haven’t quite gotten there yet. I’m almost finished with Olive Kitteredge and am trying to stay interested in a garden memoir called Paths of Desire. Oh, I launched myself into a third or fourth re-read of Voyager, the third Outlander series novel. Couldn’t help myself after the tv season finale. Plans are for it to be a weekend reading book to carry out a slow read until next season. I’m also trying to go through a back-log of magazines.

Nothing exciting. Coffee is some cheaper brews recently. I did find a decent Seattle’s Best blend, though.

First, geeking out on some DNC convention highlights….

What’s going on with you?