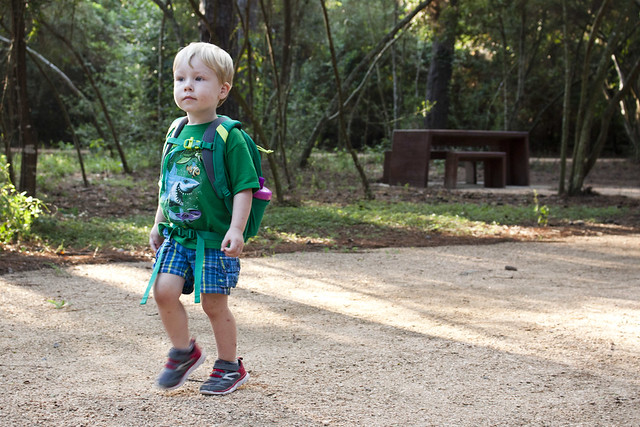 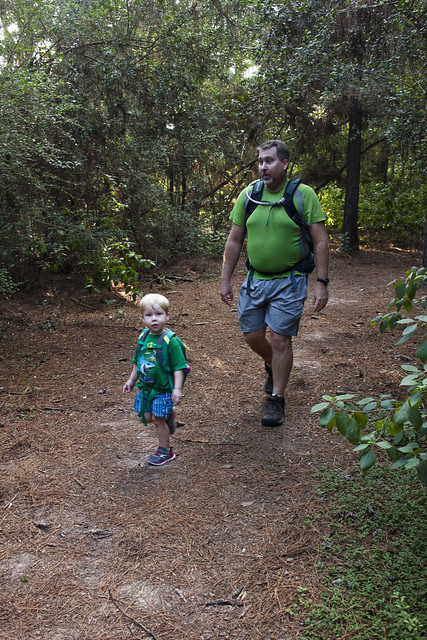 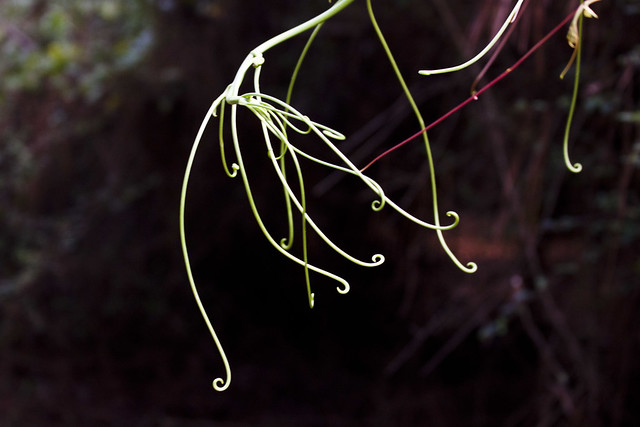 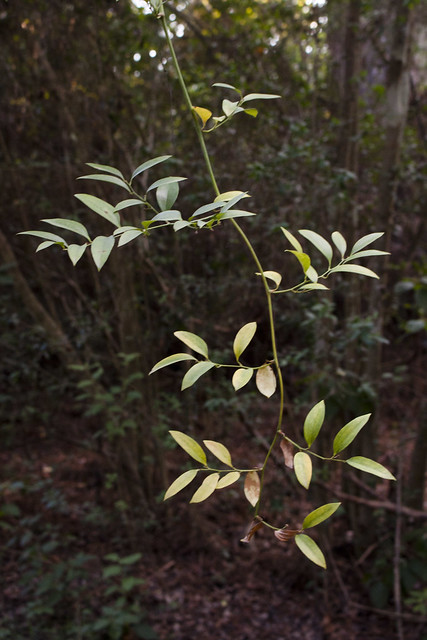 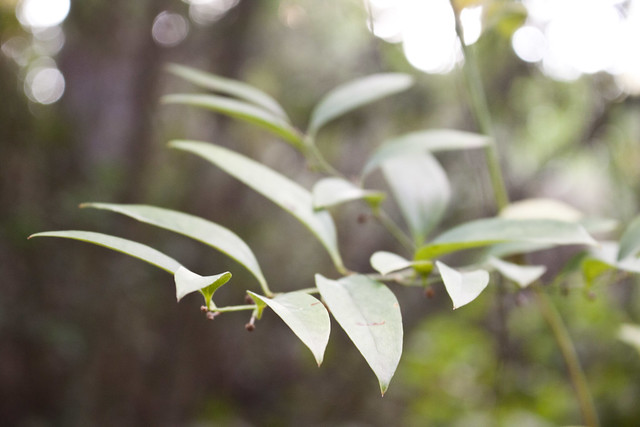 One thing that was been hard for me to adjust to over the last three years since Forest was born was not being out and about in the evenings. Where our house is located, it makes driving anywhere a bit of a chore, about 20 minutes into town and then further for just about anything else, and having a newborn, then older baby, and then toddler, made going out after dinner or doing anything else not worth it. Before Forest was born Chris and I had a standing dinner night out during the week, and we attempted to keep that up during my maternity leave but it became clear evenings out were not in the cards for us and we quickly switched eating out during the week for a weekend lunch out. 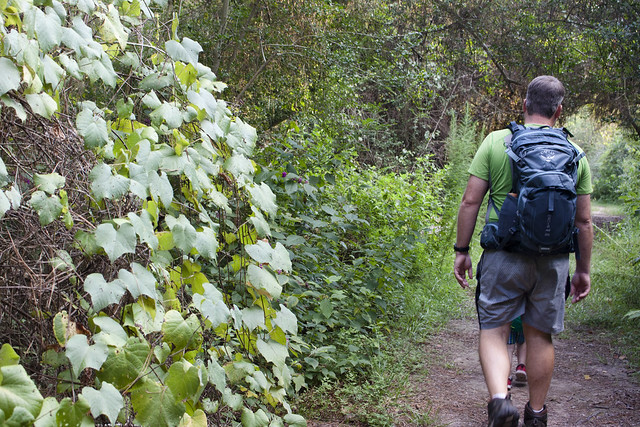 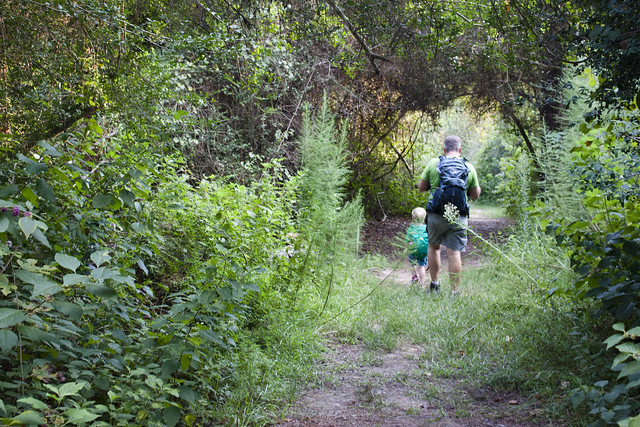 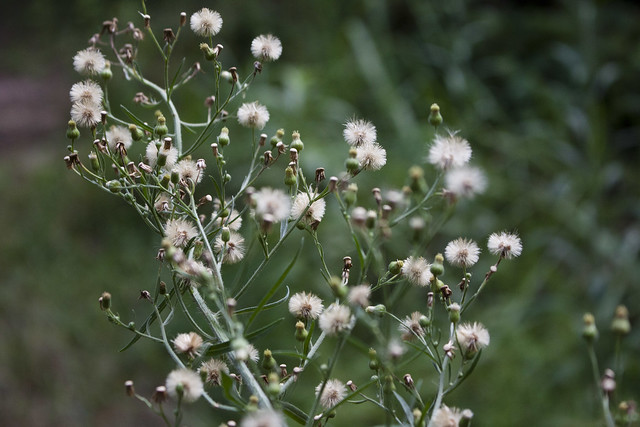 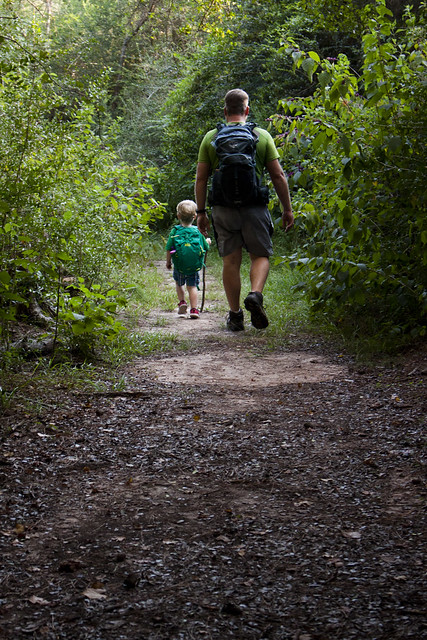 And then of course as Forest got a little older there was bedtime and meltdowns to contend with and it still just wasn’t feasible. But over the last few months I’ve made some treks out (Chris has always gone out, of course, while I was nursing Forest or putting him to bed) and being out in the evenings feels like revelation of sorts, something I’d completely forgotten about. I enjoy spending time at the house but I do miss running out to wherever, whether it was for errands, dinner, or evening hiking or exploration. Slowly, it seems, we’re able to add that back in a bit. 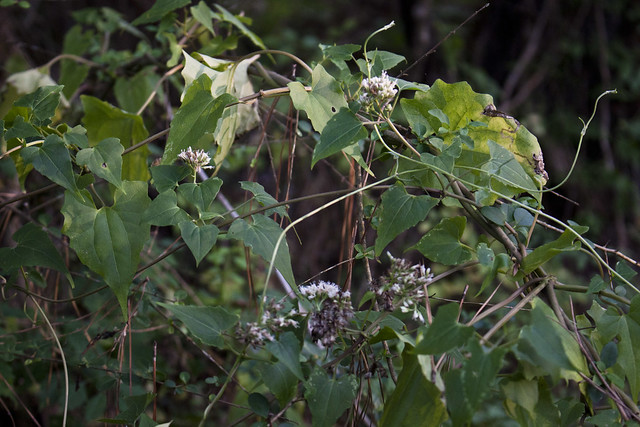 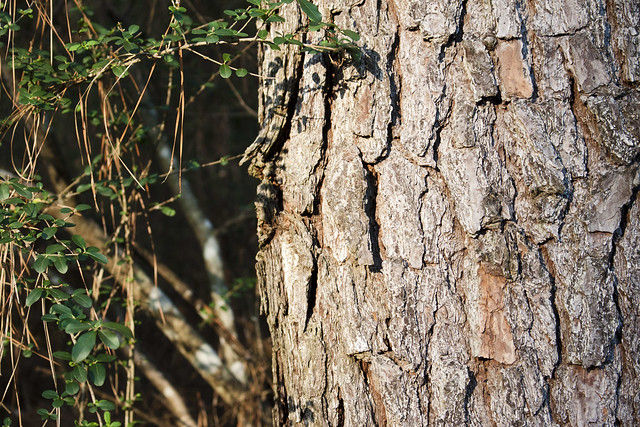 All summer I’ve been hankering for a short hike or exploration at a local park after dinner but we’ve just never had the chance or made the time. After the brief cool front last week that turned the temperature down from 100* during the day to 90* during the day I knew I needed to get that evening time in before the months slowly ate up the daylight in the evenings. Those golden hours are already fading as we head into August. 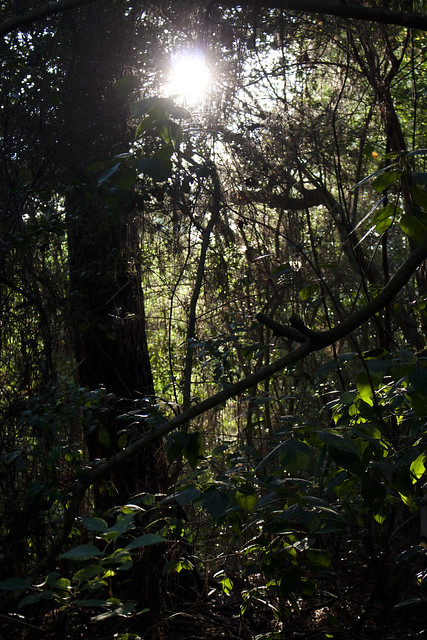 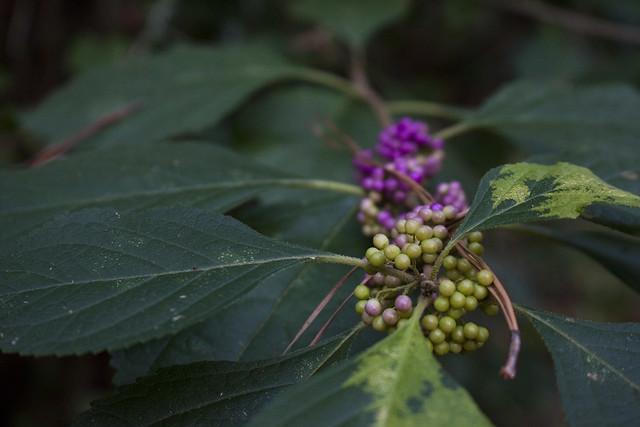 So, we went out for a walk to Kleb Woods. Recently we bought Forest his first backpack, one suitable for hiking, complete with the two straps across the front of the body. It’s an REI Tarn and made especially for little kids. It took some getting used to, enticing him to wear it, but when we let him know he could carry some toys and his gummies he was a lot more game to wear it. And he wore it for about 3/4 of the hike the other night! 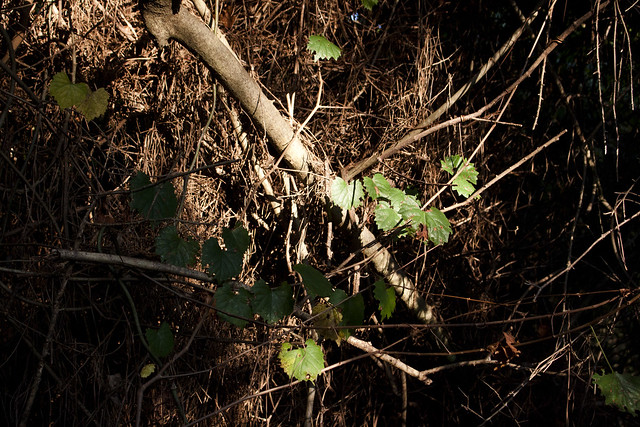 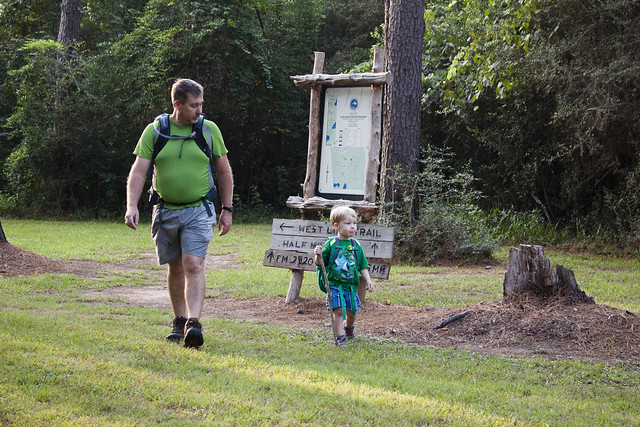 We hadn’t been to Kleb Woods in quite awhile and I wanted to start off at the entrance on FM 2920. It has a long area of mostly loblolly pine and yaupon with a small wetland area before it connects up with the wider area of the park where a little nature center and the original farmstead that Mr. Kleb lived in is located. (You will want to read that link!) It was 0.7 miles from the parking lot on FM 2920 to the nature center and walking with toddler legs took time. We paused a few times to swat mosquitoes, look at ripe grapes on the muscadine vines (I snagged a couple—tasty!), and ogled at the beatyberries. Forest kept calling the beautyberries grapes and we had to keep correcting him. 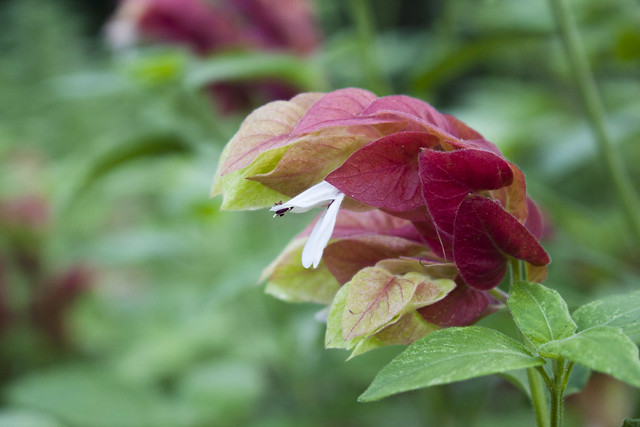 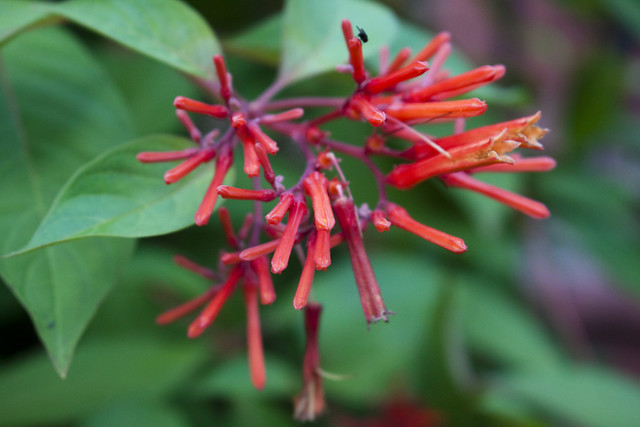 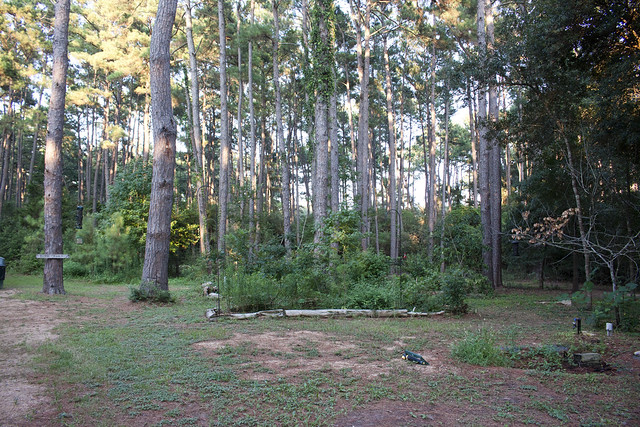 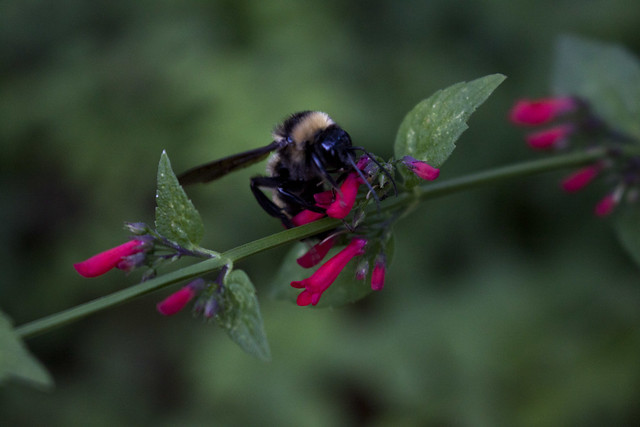 Along the way Forest managed to find the perfect stick to use as a walking stick and he kept it for the majority of the hike. Unfortunately I think he’s got my tripping on over roots and sticks gene because there were several near misses. Finally we made it to the nature center where we took a short break, looked for hummingbirds in their garden area, and scoped out the little pond near Mr. Kleb’s old shed. Chris found a bullfrog and pointed it out to Forest and later Forest declared that was his favorite animal he saw during the trip. 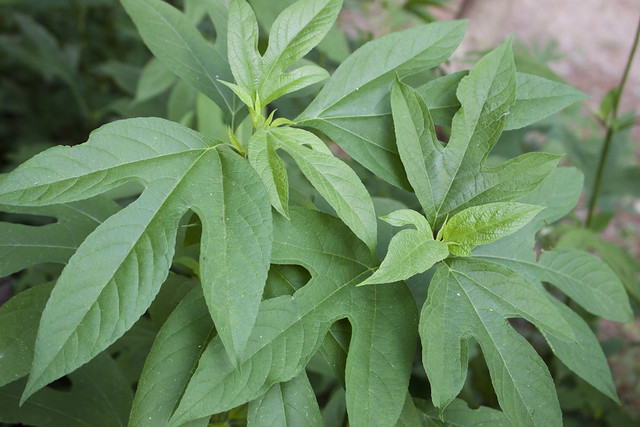 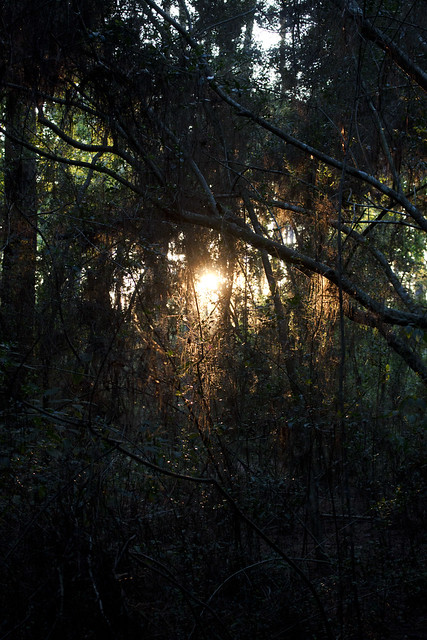 The return trip was slower, which was a bit problematic because the park closed at 8pm. The sun was lowering on the horizon, the forest was darkening, and Forest was slowing. He ditched his backpack, sweat wetting the back of his hair, and we kept plodding along. We weren’t far from our car when we heard the security truck over a loud speaker proclaiming the park was closing. I ran ahead to flag that we were on our way and we hustled to get out of the park and home. 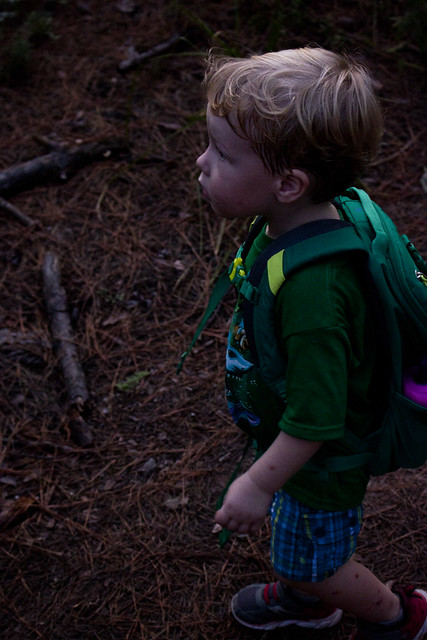 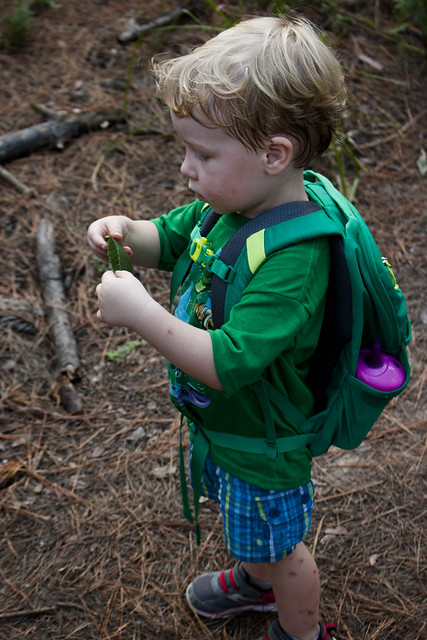 I don’t know if we will have any more evening hikes this summer but I’m glad we got this one in while we could.