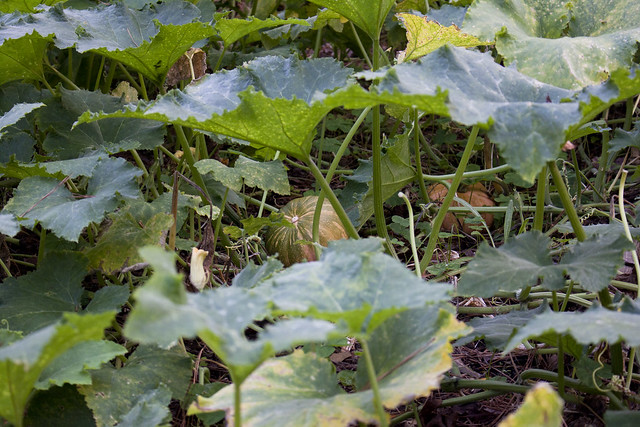 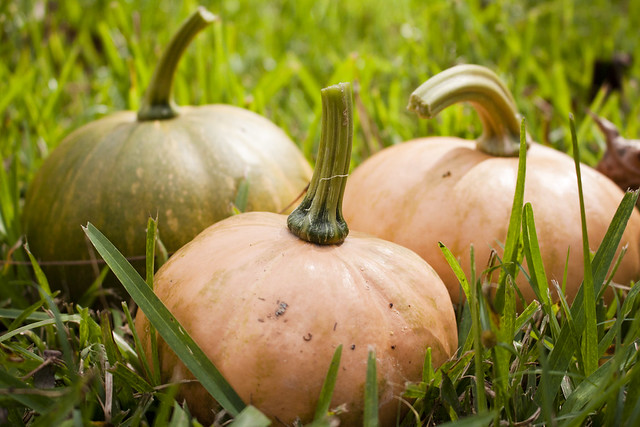 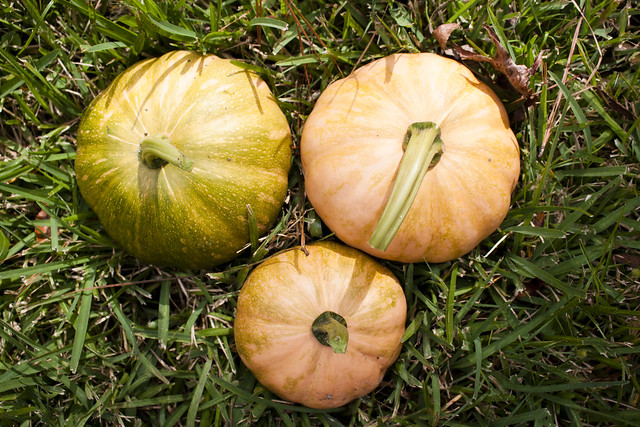 Three more Seminole pumpkins have ripened out on the vines. I pulled these and processed them for more pumpkin butter. There are several more still out there and I will process those and just freeze the pulp to use for baking later throughout the year. 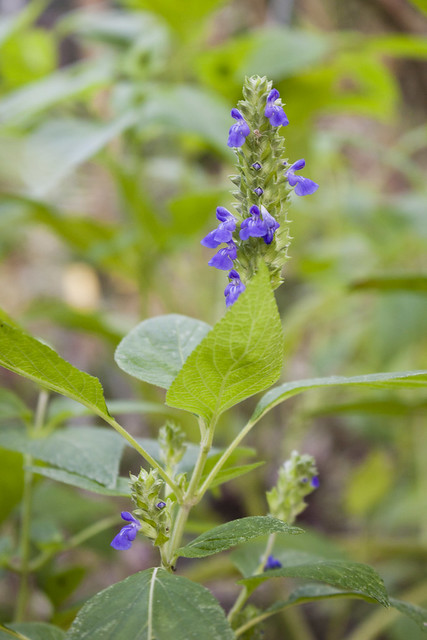 My great pantry chia seed experiment has finally come through! Back in the spring I threw out some seeds to see how they would do in a different location. A couple of years ago I tossed a couple of seeds out on the side gardens but it was too shady and the plants just got leggy and never bloomed. Well, this year I threw some out—too many according to Chris–and I thinned them a little throughout the summer but then Harvey’s rains caused a lot of them to flop over so many of them got pulled. I left enough to see if they would bloom—earlier in the summer I read that they were a short day length bloomer and knew that it would be fall before I saw anything. Well, finally here we are, blooming! 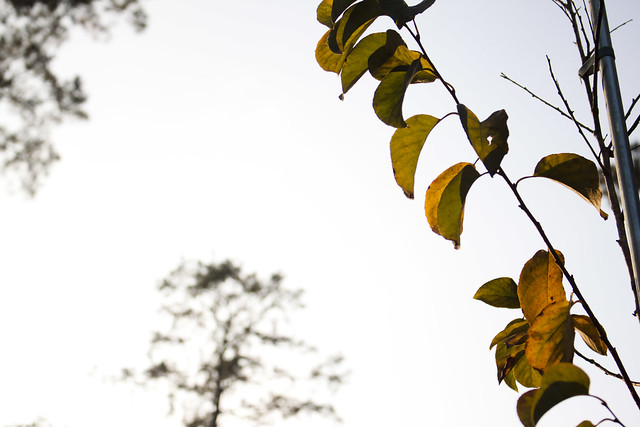 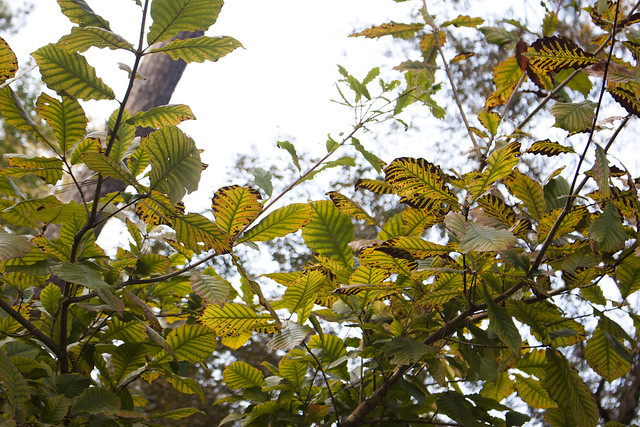 As always, fall color down here is subtle. Full of yellows and light oranges rather than deep oranges and fiery reds. Last week’s cold front really propelled the leaf change. 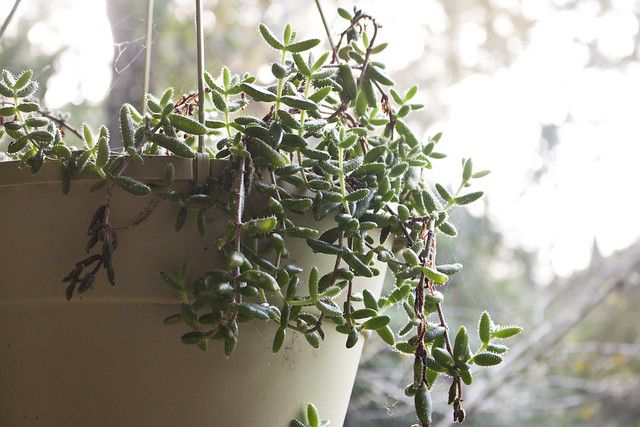 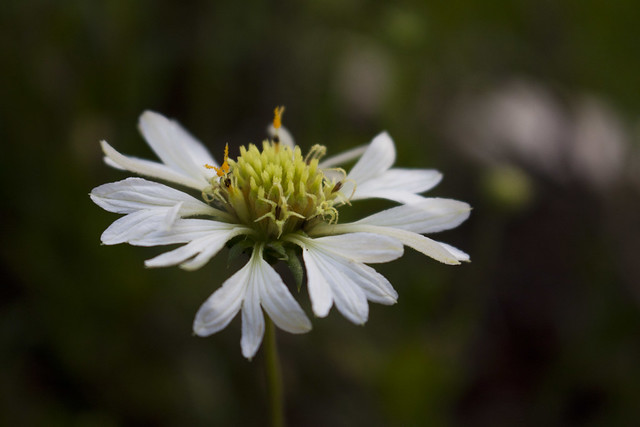 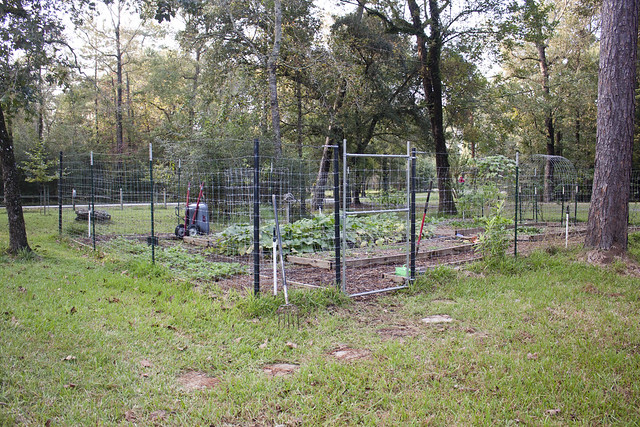 I’m almost done moving mulch to the edible garden paths. I’ve been working steadily but cooler weather and other plans during my lunch hour have prevented me from finishing over the last several days. Chris finally got around to planting out two of the empty beds so it looks a little different now than in this photo. 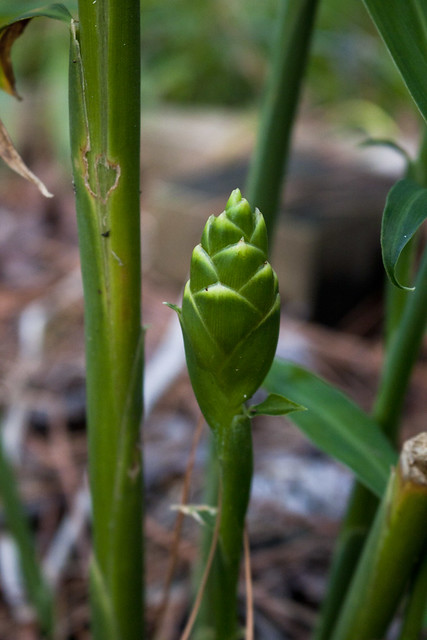 I was thrilled to see the edible ginger sending out flower spikes! I’ve been patiently waiting to see if it will actually bloom or not. 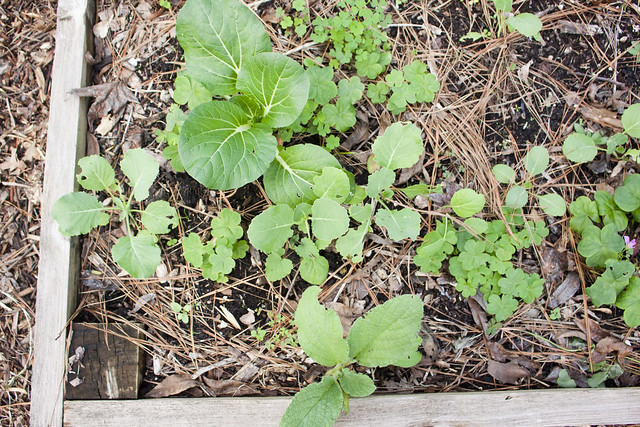 There’s quite a bit going on in this photo: cabbage seedlings—or rather tweenagers—a self sown bok choy, a borage, and plenty of free growing oxalis which I just learned is edible. It’s rather tasty, too! A little sour, almost citrusy. I’ve added some to my salads and I kind of like that it is growing in the edible garden alongside everything else. 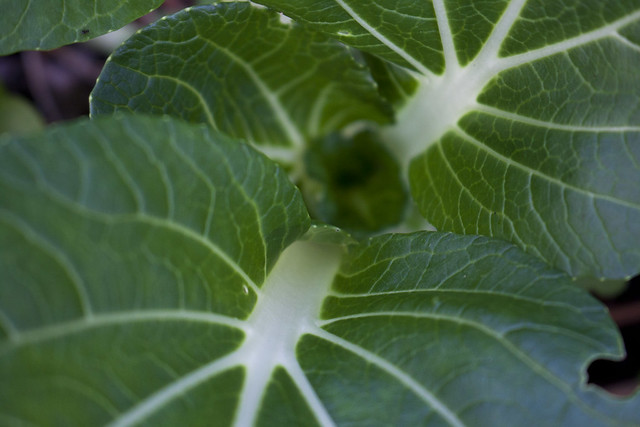 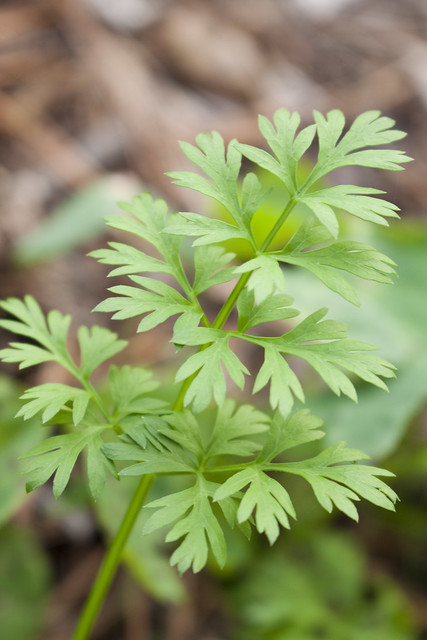 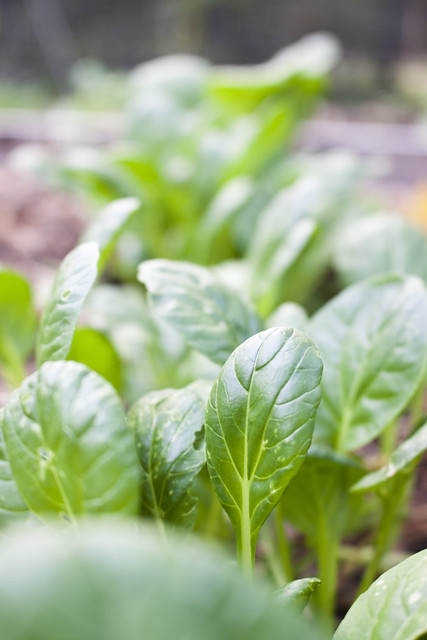 ‘Rosette’ tatsoi. It’s doing very well and I need to get to eating on it! 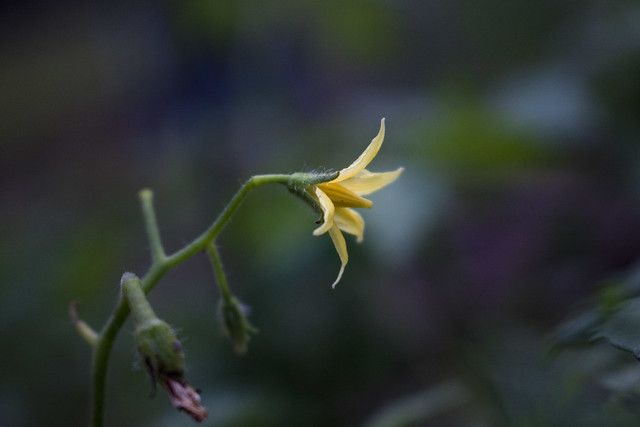 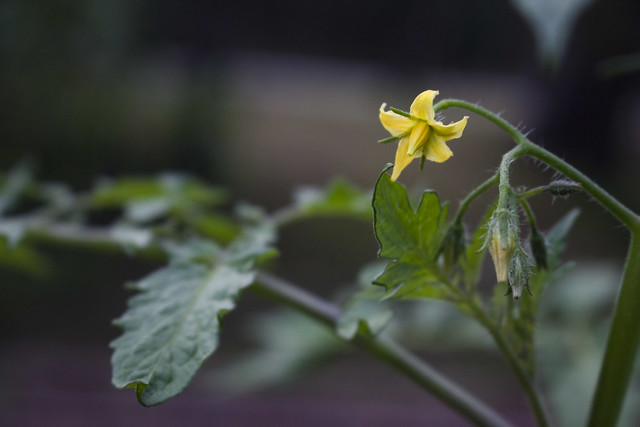 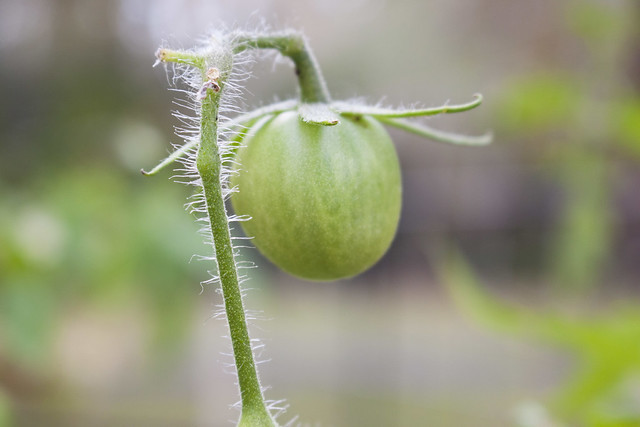 My fall tomatoes are doing quite well and while I hope that I can get a round of tomatoes in before we have an actual frost or freeze I’m getting skeptical. Honestly, I’m becoming skeptical of Texans being able to have a supposed fall tomato crop unless you live south of I-10. I can’t say that this year will be any kind of good test to go up against because I also had to deal with Harvey wiping out all of the tomatoes I had going, but the ones I replaced those with have thrived and grown extremely well—it’s just that we stay warm so long and night temperatures for flowering don’t drop until late October really, and then it gets iffy with cold fronts. What I’m saying is, it is such a narrow window. And with all of this, I’ll be starting spring seeds indoors in December anyway. I guess I will just keep waiting to see how this year goes before I keep trying this mythical fall tomato harvest. 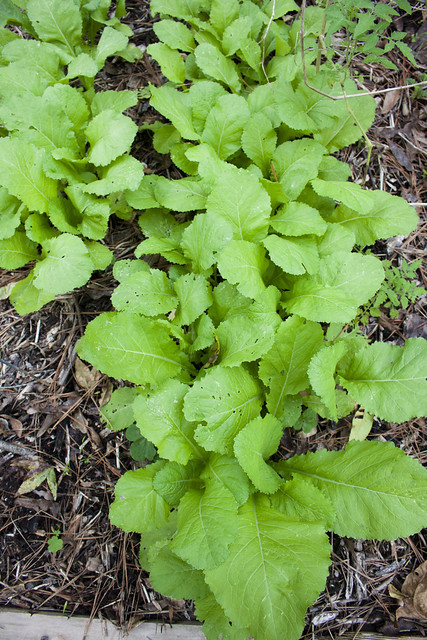 One green I am uber impressed with is the Florida broadleaf mustard. It has taken off and is thriving! I’d say it is less spicy than the red giant mustard but it still has that bite. I would like to steam or saute some up soon. 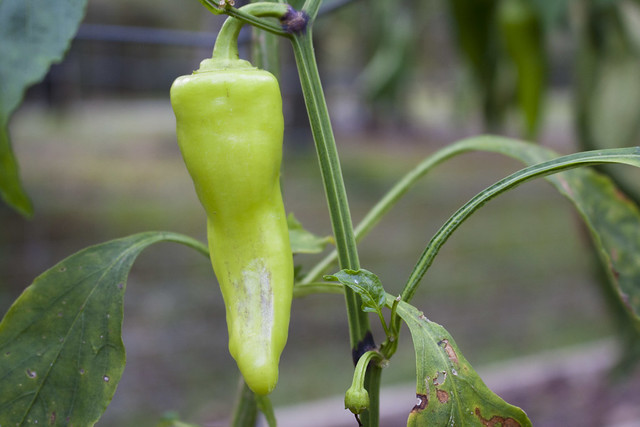 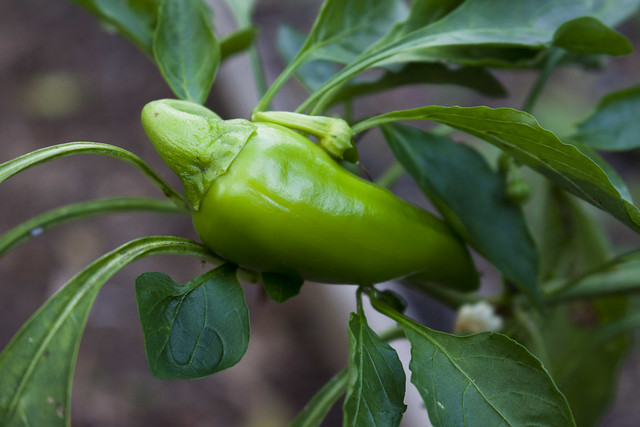 The two pepper plants are still producing. They will continue up until we have a freeze. 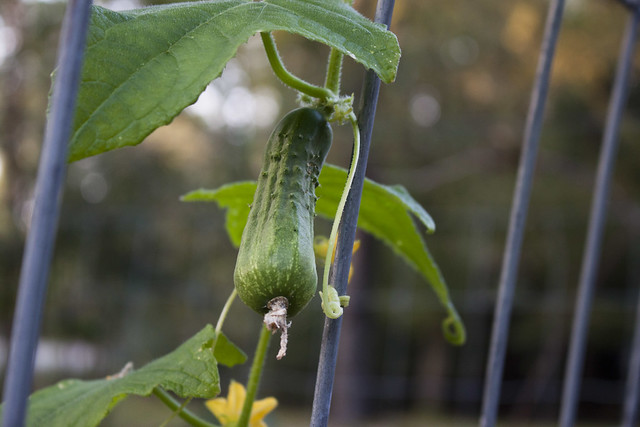 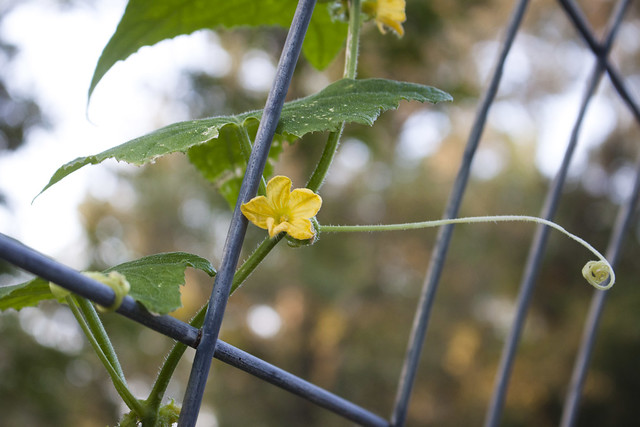 The ‘Sumter’ cucumbers are doing well and while I did not plant very many I am getting plenty to eat and still share with coworkers. It’s amazing how many cucumbers you can get off of a couple of plants! 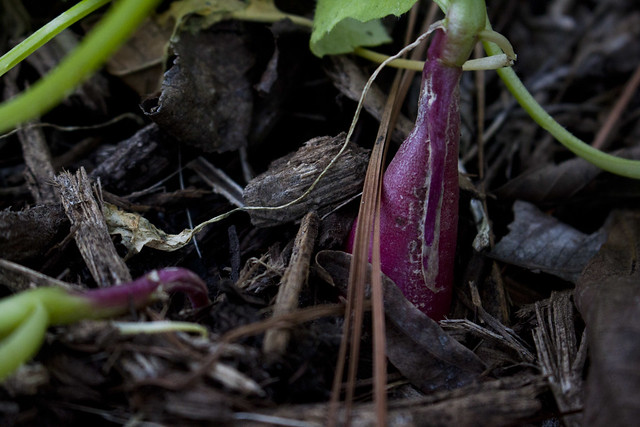 Most of the radishes are ready to start harvesting, too. 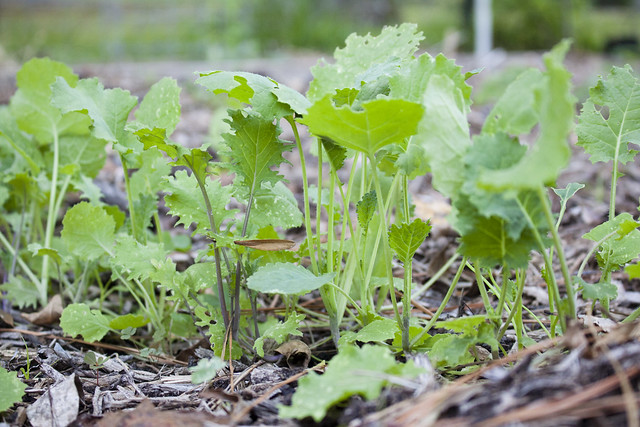 Kale is slowly growing and I’m looking forward to having plenty of kale salads and kale chips over the winter. Maybe some Zuppa Toscana soup, too!

A slight dip in temperatures this week but looks like we’re back to mild weather again soon. I’d say that’s a good balance—a few days of cool to get that cozy fall feeling with plenty of days to be outside in between. Too much gray for me gets me into SAD territory.