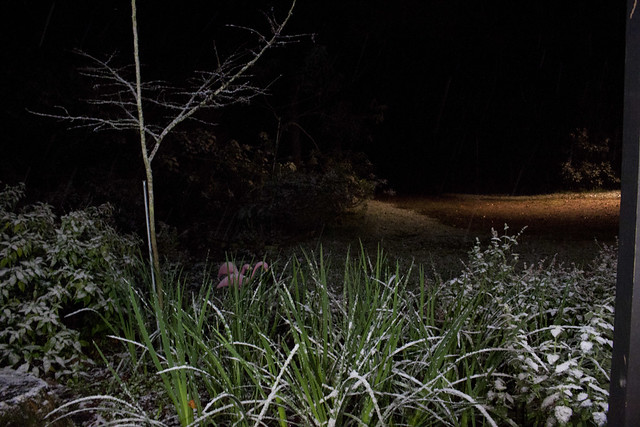 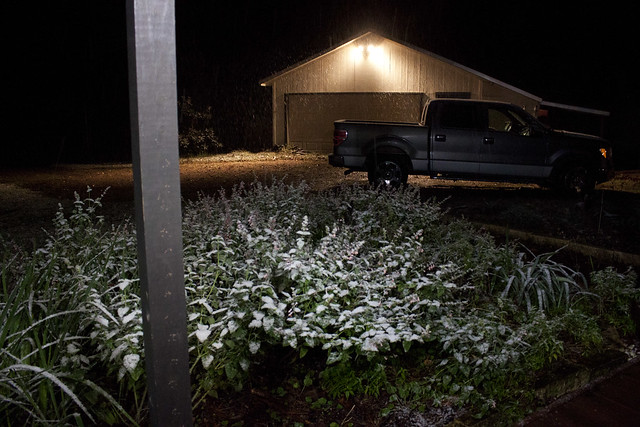 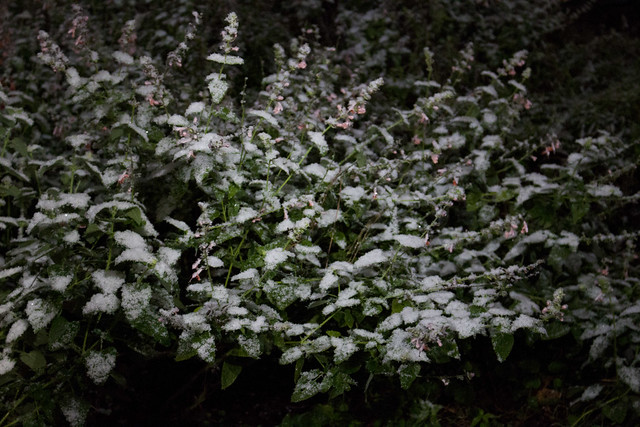 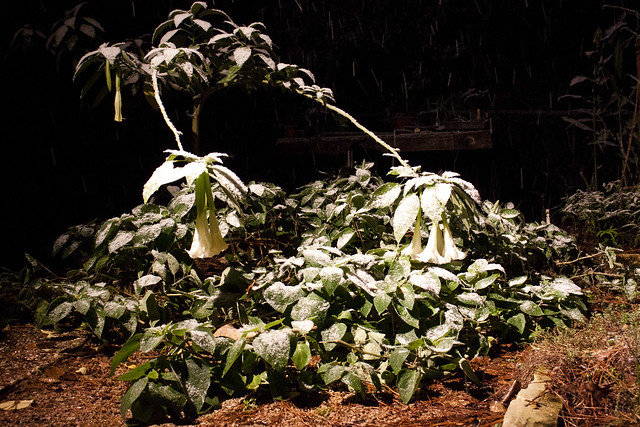 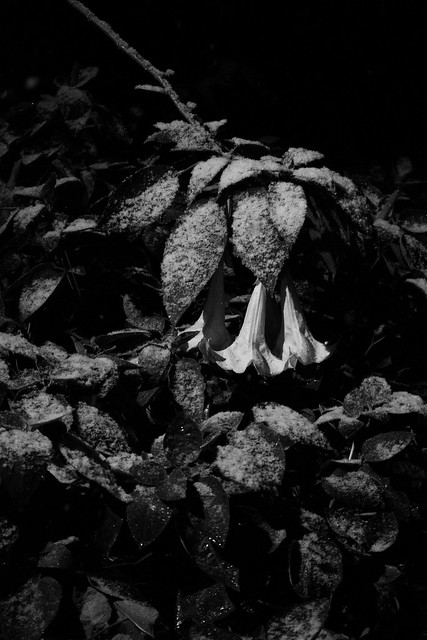 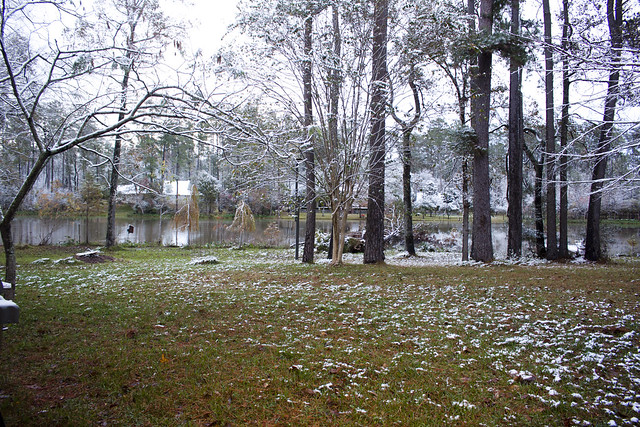 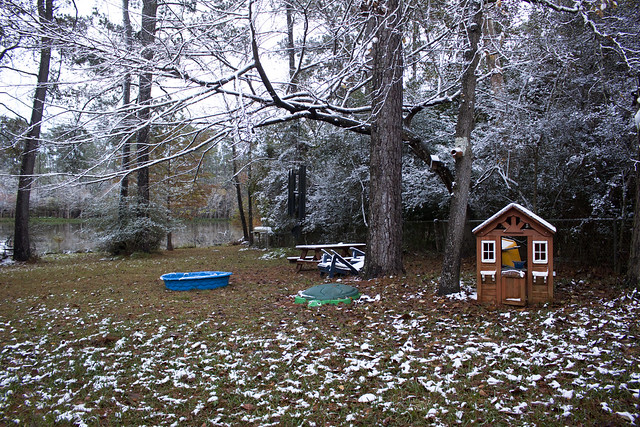 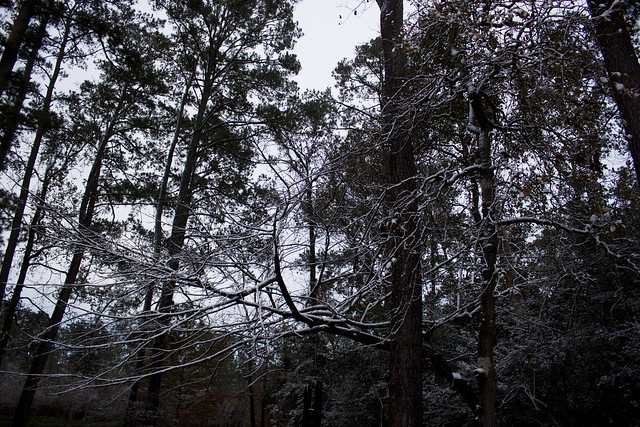 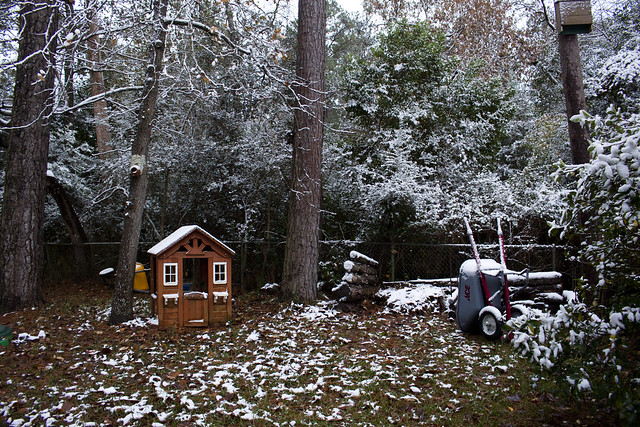 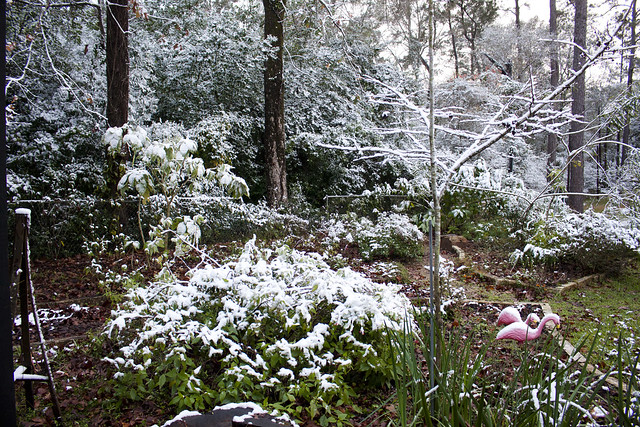 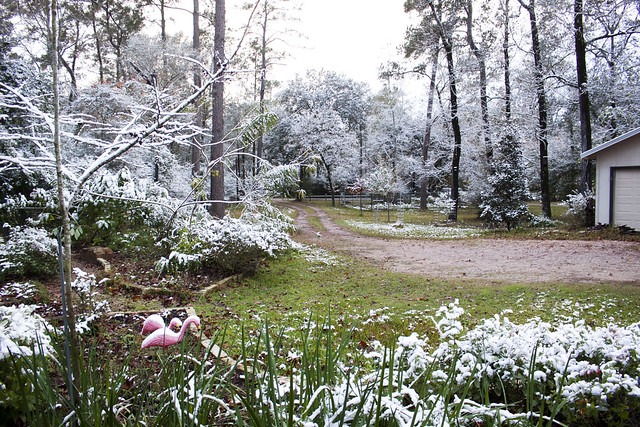 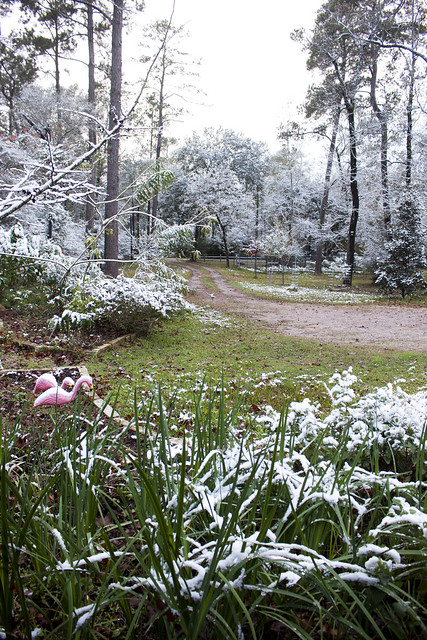 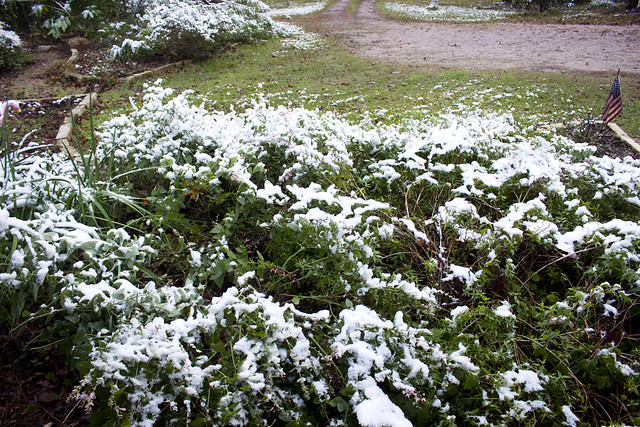 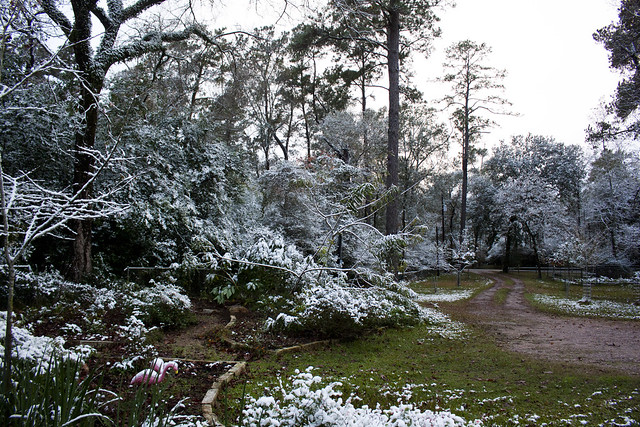 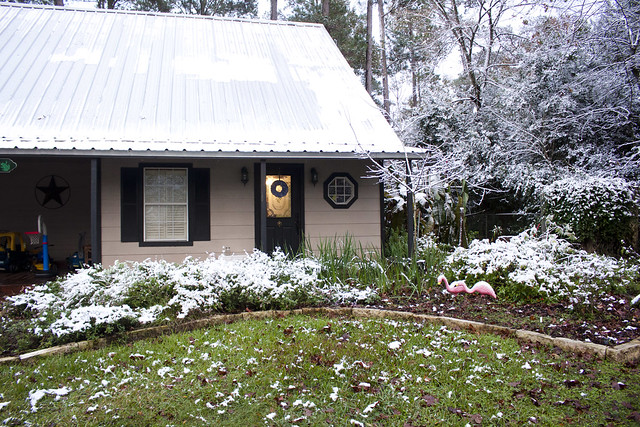 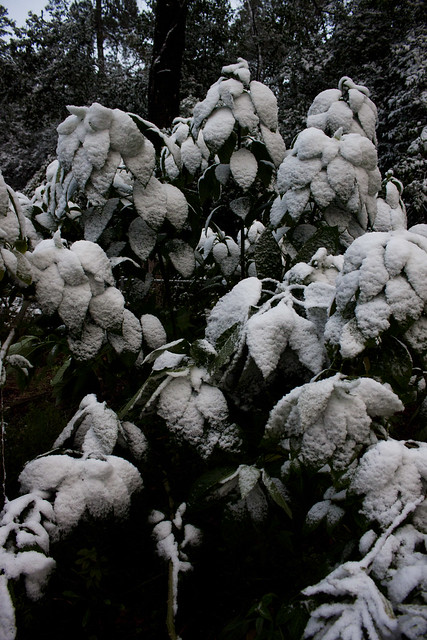 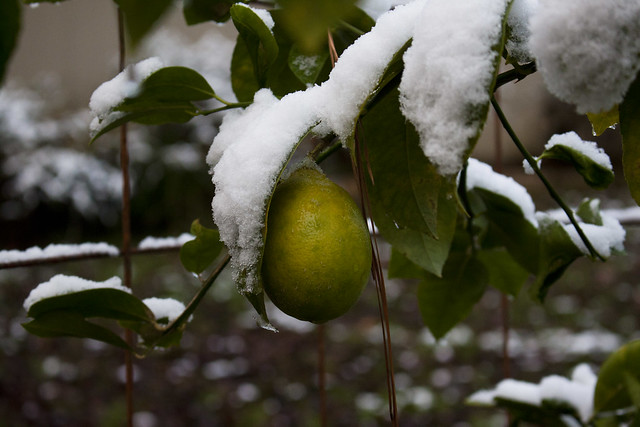 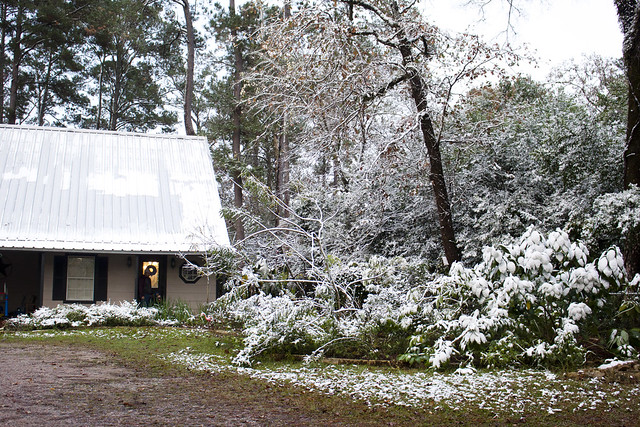 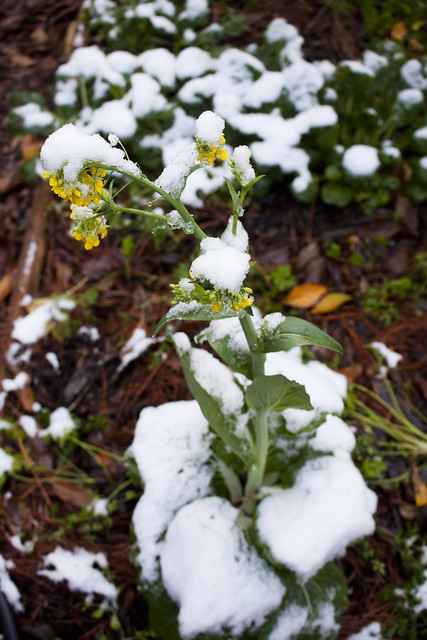 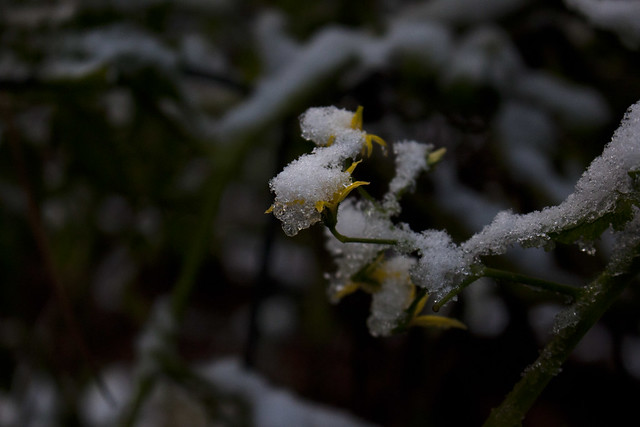 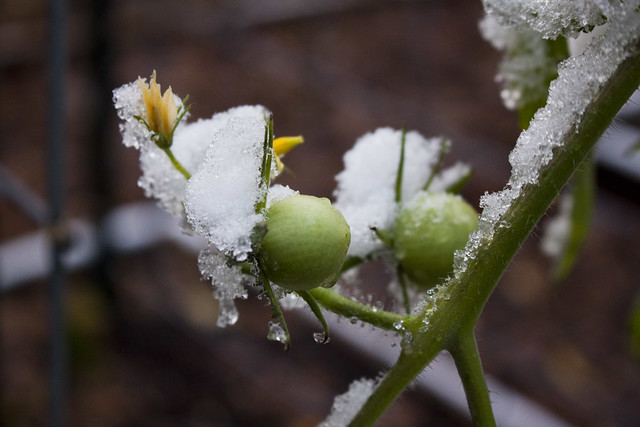 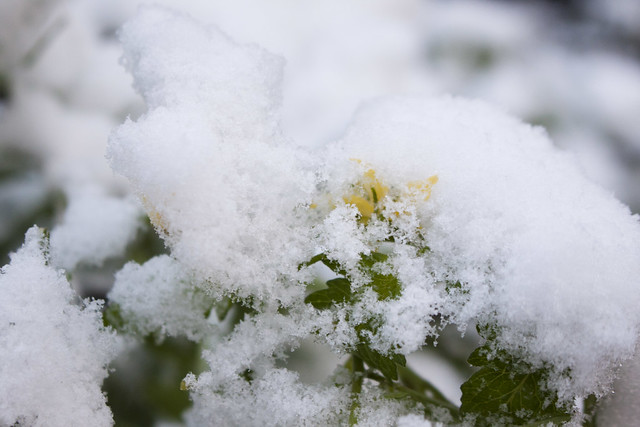 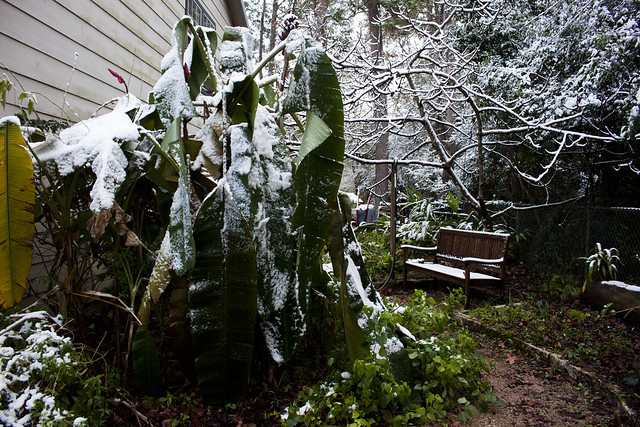 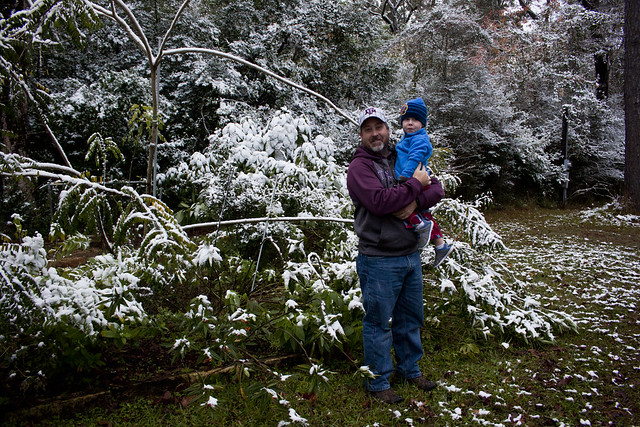 Last week was fairly dreary around here with on and off rain and chilly temperatures. We knew it was going to head towards freezing on Thursday and Friday nights so on Thursday at lunch Chris moved a lot of the sensitive plants indoors and after I worked I moved some of my stuff off the potting bench and under the porch. When Chris got home with Forest at dinnertime he said we might have some snow flurries around 9pm. That was exciting but I figured it would be just that—flurries. We had some sleet a year or two ago with a little bit that piled up in the corners of areas near the house but it was nothing to write home about, and of course we had a little ice storm in March 2014 just as we were leaving for a trip to Florida.

But the last time it really did any snowing around here was in 2008, though I also saw 2009 mentioned in other news sources. I remember the 2008 one well because I was living in Florida and several of my Houston and Galveston friends were sharing photos of the snow. It was definitely surreal seeing snow accumulated on the Galveston Seawall! It does snow here, every 10-15 years and definitely not all over the Houston or southern Texas area.

Around 7:30 pm on Thursday I was mid-way between giving Forest his bath when Chris came in to say the snow had started. We hurried and finished up the bath and got Forest dressed so we could hop outside and watch the snow fall. At that point it was barely freezing so the snow as very wet and melting as it landed. We watched for awhile and then it was Forest’s bedtime so we started that shuffle and the snow kept falling. I finally texted my friend in College Station to ask her if it was snowing since it is only an hour drive northwest of my house. She replied with a photo of several inches and said it had been falling since 6pm! I then got online and saw it was sticking well in areas from San Antonio and Austin over to College Station. Later I saw snow photos from Rockport and Padre Island National Seashore—where they definitely got more than us!

Around 10pm the temperature dropped a degree or two and the snow began falling harder and started sticking onto the plants and then barely started sticking to the ground. I finally went to bed at 11pm which is when I took those photos in the dark at the top. I had pulled the weather up to look at the hourly temperatures and it was all hovering around 32-33* so I figured the snow would be gone the next morning.

Well, we were in for a surprise when we woke up! And all of Houston was entirely excited about the snow! Friday Morning Houston Wonderland from Space City Weather.

We put some layers on—well, putting layers on Forest was pretty difficult but Chris finally managed to get him to layer up and put gloves on—and I walked around taking as many photos as I could because I knew it was all going to be gone by noon. I had to go to work but Chris was taking a PTO day and was taking Forest into daycare late anyway so they could lounge for longer than I could. When I got home for lunch, the snow was indeed pretty much gone except in the shadiest areas. There didn’t appear to be too much plant damage at that time but with Friday’s freezing temperatures again that sealed the deal on the damage for many of the plants. Everything will bounce back except for the tomatoes and pumpkins, of course. The peppers look like they might go either way. I’ll know that in a few more days.

It was a magical experience and we joked with Forest he would see snow here again when he was about 13!