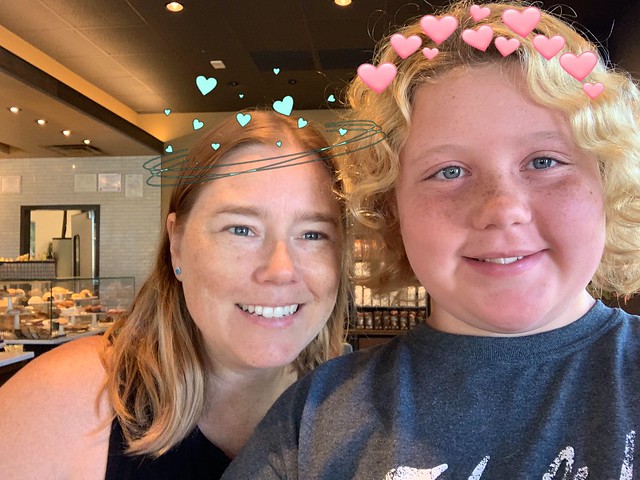 Me and my niece Zoe a few weeks ago.

About our upcoming vacation! It’s a good one with a lot of moving parts involved so I’m hoping it all goes smoothly!

And generally having an existential crisis on the creeping fascism growing in the world and the rapid state of climate change.

I spent most of the summer heavily working in the edible garden on the soil solarization of the paths. So much was involved in this process:
-from first removing the weeds in the path
-then scraping up several inches of years of decomposed mulch that had turned into dirt and transporting it to the backyard in one of our low spots to raise it up
-cutting and spreading out the plastic
-moving rocks to hold it down (this involved shuttling by wheel barrow rocks we have stashed for future garden projects—my dad helped me out with this one weekend back in May)
-and finally moving mulch to put down into the path after the section was complete.
-wash and repeat three times.

I still have a small section I’m solarizing and will need mulch for it in a few weeks. In addition, I was trying to keep on top of the weeds in the beds themselves and just do some general gardening. Over this last weekend I prepped some of the empty beds with bat guano (from our bats!), biochar (Chris made it from a tree we had to cut down back in the spring), compost, and then mulch on top. I had also added in some new soil into a couple of the beds earlier this summer as they had settled/lost soil over the years and I didn’t have enough compost to fill beds.

Something we’ve also been lacking for quite a while are greens for the compost. Leaves are easy to come by every autumn and we get bags of them from Chris’ mom or we rake up ours, but greens are usually just whatever we cut down from the garden, which doesn’t happen that often and isn’t enough to get the compost hot. I haven’t picked up bags of grass from neighborhoods in years and that’s really what I needed. However, I mowed the yard last week after maybe six weeks of it not being mowed and I was able to blow enough of the cut grass into piles that were easily rakeable and I moved several loads to the compost to help that get started.

Sparkling water. I’ve never been a fan of the plain stuff but my mom has been on a Bubly kick for a while now and when she was down with everyone else over Memorial Day I tried one of her lime flavored ones—and I was a convert! Another brand I had been hearing about was Spindrift but it is usually a buck or two more than Bubly and I was leery about buying a whole case of them if I didn’t like them. Luckily one of our grocery stores had a can in their drinks fridge and I bought one and really love it!

I stopped drinking soda many years ago and sometimes I want something different. I’ll make iced tea on occasion but I primarily drink regular old water as I just generally love water! However, having the sparkling water this summer has been a nice treat on the super hot days and a little change in pace!

Since I’ve not been writing my book reports here much this year I’ll share a snippet of what I’ve been reading this year.

Plant Dreaming Deep by May Sarton: I’ve been reading this one on and off for like two years, mostly because I was savoring it and partly because I couldn’t focus at first. But as I got reading I fell in love with this journal/set of essay by poet and author May Sarton. This book focuses on her mid-life settling down into the small town of Nelson, New Hampshire. It’s a quiet book, writing about the people and happenings of a small town but she also captures these delightful paragraphs about the way light falls in her house—and as someone with an affinity for the way light falls in my own house (or previous houses), I was lapping up all she could give to me!

Sarton has several other fiction books, poetry, and other journals and essays that I will be dipping into soon.

Upstream by Mary Oliver: I used some birthday money to order this book of essays, something I’ve had flagged to read for several years now. The book was a lot thinner than I imagined it was going to be but it was so delightful. I was a bit dismayed at her noticing and then stalking a freshwater turtle who had come up to nest from a waterway and then digging up some of the eggs and making a meal out of them! And I did get a smidge cross-eyed as she analyzed some poetry and poets in a couple of middle essays and had to skim through those, but her natural history essays were perfect.

The Royal We by Heather Cocks: A total chick lit book that I devoured. Hat tip to the gals at Friendlier Podcast for getting it on my radar!

The Whole Okra by Chris Smith: Finally a book about one of the most maligned edibles there is! I previewed this book on NetGalley first and then ordered it after it was published. It’s very good with great historical context on how okra came to this content plus talking about how it is used in other cultures throughout the globe. I did not grow a bunch of okra this summer but will get it back on my growing agenda next summer. I did have a couple of rows of smaller growing plants but not the big harvests I was getting last year.

I had plans for studio time this summer but that didn’t really happen much. I managed to finally get curtains for the windows after all these years and it has made a difference with the temperature in there. Despite the room being connected to our a/c, it just never stays as cold or warm over there. I’m thinking we’ll head over there more as the evenings get darker earlier.

My desire to crochet is returning after a three year hiatus. So, I expect some projects this winter on that front.

The Americans: I spent the last part of June and most of July binge watching all six seasons of this show, which originally ran on F/X. It was a show I had wanted to watch when it originally aired but I never got around to seeing it and didn’t want to start in the middle. It’s currently on Amazon Prime. The premise if you aren’t familiar is that there are deep cover Soviet spies living and working in the US in the early to mid-80s. There’s lots of violence and sex so if you are at all averse to that this isn’t for you—but there are great storylines as well. Honestly, it is in my top 10 tv shows I’ve ever watched and I was stuck thinking about the ending for weeks after. And! it’s partly based on a true story from 2010!

Orange is the New Black: Oof, this was a hard season to watch. I knew the ending wouldn’t tie up nicely because well, all of the ladies are still in prison doing their time. Some of the storylines I didn’t particularly like how they detoured or left them (Red, Carla, Maritza) —with Carla’s storyline you know that’s based in truth and that hurts to think about. And I’m sure Martiza’s as well. I just hated seeing Red end up how she did. It was a great season and I’ll be sad not to have it as my summer watching every year.

Stranger Things: I finally managed to get around to this last week. It was tied up nicely in case the show isn’t picked back up again but there’s that sort of cliffhanger at the end where you just wonder…and I’m not going to give anything away.

I don’t have any particular podcasts for you to listen to but I was glad to find that 91.7 KXT based in DFW has an app so I can listen to their music from my phone now! I’ve been put off with Spotify recently as their algorithm has gotten stale—same for Pandora—so being able to listen to my favorite radio station from afar is awesome! I have listened on the computer before but this makes it easier to take it with you.